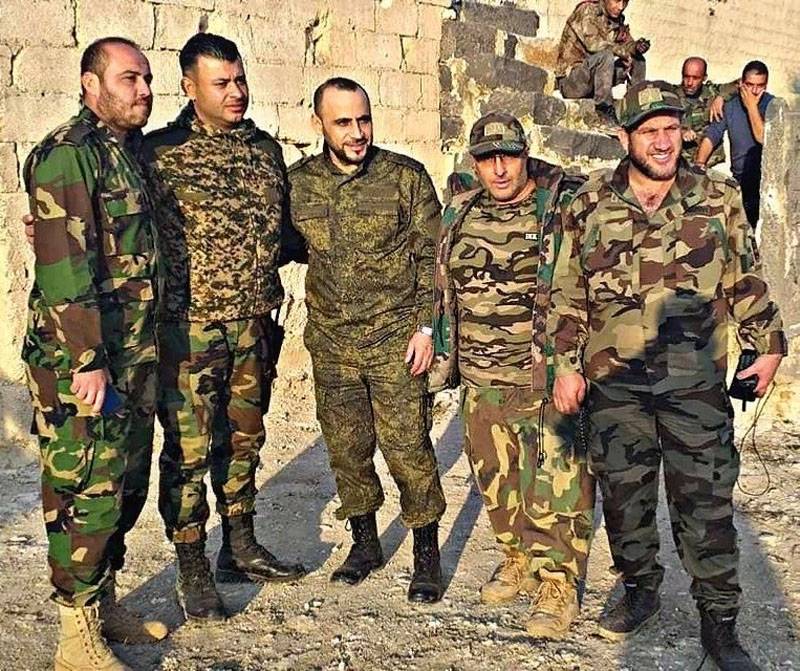 Media reported that the Russian aerospace forces helped the Syrians recapture the strategically important city of Sarakib, abandoned by government forces at the end of last week. The operation to liberate Sarakib was carried out by units of the Tigers, Shiites of Hezbollah and reserve units of the National Guard.

By inertia, “Tigers” are called the 25th Special Forces Division - an elite tactical formation of the Syrian Arab armed forces (SAVS, SAA), specializing in offensive operations. Previously, this formation called itself "Tiger Forces", it also included brigades - "Forces of the Cheetah" and "Cheetahs".

High-profile names were confirmed by successful offensive operations, for which the Tigers were even called invincible. Last year, they (in fact, police militias) tried to merge into the Syrian Arab Army (SAA) and were given the status of a special division. In fact, the forces of the Tigers (4000 fighters) are pulling on a good team. The inflated status of the division was a recognition of the military merits of the militias.

However, the Tigers refused the offer to enter the CAA. They didn’t want to lose their organizational and financial independence, because the militia’s salary was twice as high as in the army (the formation of Syria’s investor, Rami Makluf, the cousin of President Assad, is financing the formation). The Tigers called by the division are still fighting well. The liberation of Sarakib is another confirmation of this.

The National Guard, which took part in the operation to liberate the city, also stands apart from the Syrian armed forces. These are elite troops designed to protect the Syrian government and maintain security in central Damascus.

During the war, they grew to the scale of a full-fledged division, supplemented by two tank and mechanized brigades, regiments of special purpose and special forces. They are used in critical sections of the front, which was the retreat from Sarakib, which again cut the strategic route Damascus - Hama - Aleppo. According to experts, the reserves of the National Guard played a decisive role in the liberation of the city.

Nevertheless, the Syrian Arab army remains the main strike force of Bashar al-Assad. She was pretty battered by the war. It is enough to say that in the units there was practically no light armored vehicles of the pre-war state. The personnel suffered serious losses. It is formed by appeal. Therefore, in the units a certain combination of soldiers with combat experience and recruits is formed.

Not always this union contributes to luck. Sarakib, for example, was left due to a frivolous attitude to the combat mission. According to observers, the units did not begin to gain a foothold on the first line of the line — to dig trenches and carry out other protective measures. Therefore, they were easily swept away by the fire of Turkish artillery and shock drones.

The media write that Russian military advisers managed to restore relative order in the Syrian forces. The consequence of their work was also the liberation of Sarakib.

The army is supported by more than two dozen attack helicopters and about 80 aircraft. Before the offensive on Idlib, this force significantly exceeded the terrorist groups established in the province. That was until the Turkish military intervened.

They used electronic warfare in Idlib, shock and reconnaissance drones with target designations for long-range artillery. The Syrian army faced such an enemy for the first time. Hence its obvious failures. It is necessary to adapt to the new conditions of the war. The return of Sarakib, the Syrian army showed that it is able to cope with this task.

For your home and shelter

The National Defense Forces will help the army. They appeared when Bashar al-Assad failed to mobilize. It was at the height of the war against terrorists of the Islamic State banned in Russia. As military correspondents wrote then, in the suburbs of Damascus, government forces fought against Islamist militants, and in the coffee houses of the capital there were men of mobilization age, not at all disposed to respond to the president’s call to defend Syria.

Then Bashar al-Assad initiated the creation of volunteer militias on a national, religious and territorial basis. Here he found support, since it was primarily about protecting the homes and settlements of the militias.

With the emergence of the Bedouin tribes from the war, the liberation of the territories inhabited by the Druze, Armenians, Palestinians, Christians, Alawites, the national defense forces grew to 110 thousand soldiers and strengthened the military situation of the Syrian government.

Now volunteer formations are used as a reserve in critical areas, although the main mission of these forces is territorial defense. In the battles for Sarakib, for example, local militias took part in clearing the liberated settlements from the remnants of terrorist groups.

The above examples show that the Syrian government forces today have the ability to destroy the last hotbeds of terrorism on their territory. Only now the second largest NATO army - the Turkish one, which rose up to defend Islamic militants, cannot be defeated without help.

We are in Yandex Zen
Iran in the Syrian conflict. The confrontation with Saudi Arabia and the interests of the Shiites
Syria: Americans scare themselves, and Asma Asad buys chairs
42 comments
Information
Dear reader, to leave comments on the publication, you must to register.