Ganship "The Phantom Racer" and its combat capabilities 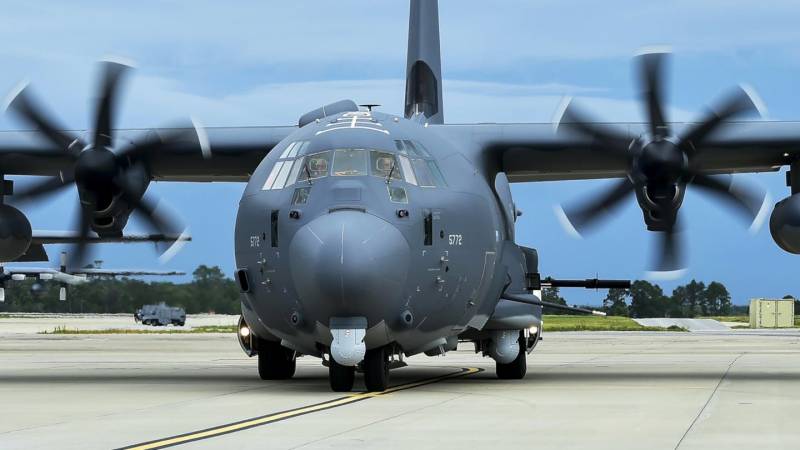 The US-built AC-130 direct fire support aircraft, also called the “flying battery,” is a unique aircraft of its kind. Rebuilt from the military transport C-130 Hercules, this strike aircraft is the eternal companion of the American special operations forces. The debut of a combat aircraft fell back on the Vietnam War. The aircraft has been actively operated since 1968 and is not going to retire. The latest version of the combat aircraft, designated AC-130J Ghostrider ("Phantom Racer"), is gradually being put into service with the US Air Force and has been actively used in Afghanistan since 2019.

AC-130J Ghostrider aircraft should replace the obsolete models of direct fire support aircraft AC-130H and AC-130U as part of the US Air Force. The first flight of the updated version of the aircraft took place in January 2014. Until 2025, the US Air Force Special Operations Command (AFSOC) plans to receive 37 Phantom Racers. The total investment in the AC-130J Ghostrider program is estimated at $ 2,4 billion.

Aircraft are converted into this modification from the existing MC-130J. In fact, this project combines the flight characteristics of the military transport aircraft of the special forces MC-130 and the AC-130 gunships. The first MC-130J aircraft intended for further conversion to the AC-130J Ghostrider version arrived on aviation Eglin base back in January 2013. And the new ganship modification received its official name Ghostrider even earlier - in May 2012. A distinctive feature of the MC-130J aircraft was that they could be used as tankers for refueling helicopters of special forces. 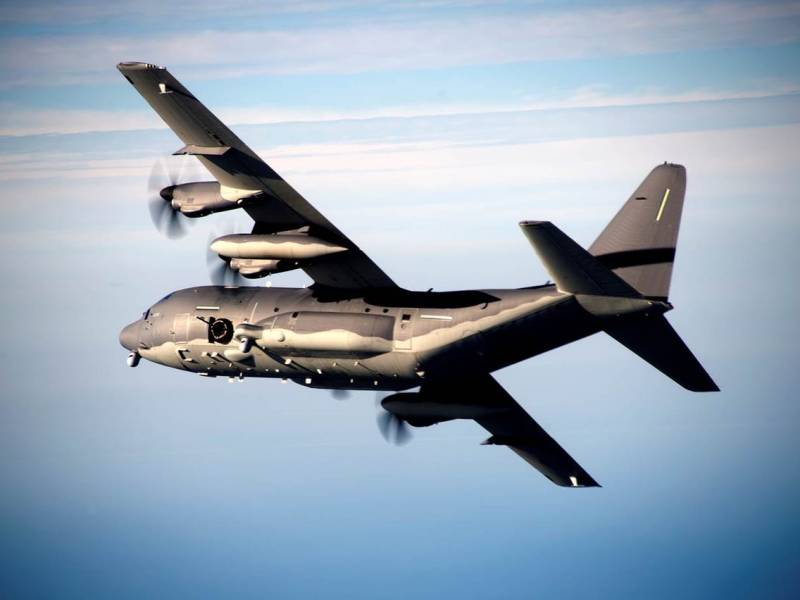 The first series of 16 aircraft in the Block 20 modification was ready by September 2017. A series of 16 strike aircraft AC-130J Ghostrider in the modification of Block 30, the US military should receive until 2021. The first aircraft of this version began testing in March 2019. Ultimately, the Phantom Racers will have to replace all the obsolete AC-130U ganships in the ranks. Together with the AC-130W ganship, the Ghostrider version will be one of two direct fire support aircraft remaining in the arsenal of the US Air Force.

The updated version of Block 30 is characterized by the correction of all previously identified defects, improved avionics and modified software. The main improvements are aimed at finalizing the fire control system. The new system is better oriented to work in various atmospheric conditions, better takes into account the peculiarities of flight and even responds to wind shifts. Most likely, all previously upgraded AC-130J aircraft will eventually be converted to this version.

It is known that Ghostrider aircraft in the Block 30 modification have been actively used by Americans in Afghanistan since 2019. The machines were used for fire support of the Afghan troops and ground forces of the allies, leading battles with the Taliban, various terrorist and criminal groups. At the beginning of November 2019, the Phantom Racers performed 218 sorties in Afghanistan, and the total time spent in the sky was approximately 1400 hours. It was emphasized separately that planes were involved in flying sorties at night, when the threat of their destruction from the ground was minimal. 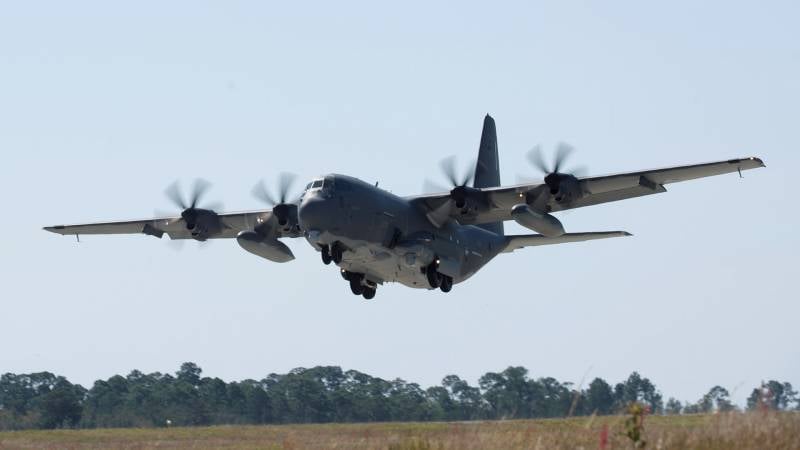 Unlike the MC-130J, the Phantom Racer can no longer refuel anyone in the air, but at the same time the ganship itself can always be refueled directly in flight, which increases the time of its continuous presence in the sky. Otherwise, the flight performance of the AC-130J Ghostrider is almost completely analogous to its predecessor. The maximum length of the aircraft is 29,3 meters, height - 11,9 meters, wingspan - 39,7 meters. The maximum take-off weight of the aircraft is 164 pounds (000 kg). The aircraft can operate at a maximum altitude of 74 feet (390 meters) with a payload of 28 pounds (000 kg).

The crew of the aircraft was significantly reduced in comparison with previous versions of gunships. Now the crew consists of two pilots, two combat system officers and three artillery operators, a total of 7 people. A distinctive feature of the AC-130J Ghostrider version is the presence on board of the modern anti-missile defense system with infrared homing LAIRCM, which, according to the developers, works in both hemispheres. The system was developed by Northrop Grumman engineers and is intended to be installed primarily on large military aircraft. This airborne self-defense system detects, tracks and disorientes IR-guided missiles approaching an aircraft.

Also on board the aircraft is the digital radar warning system AN / ALR-56 manufactured by BAE Systems. This system promptly warns pilots that the aircraft was detected by enemy ground radars. In addition, the Phantom Racer has an expanded version of the AN / AAR-47 version 2 missile warning system, which includes laser missile warning sensors. For the direct removal of the threat of missile destruction on the aircraft, an automatic fake ejection machine AN / ALE-47 manufactured by BAE Systems is installed. The device is responsible for shooting false thermal targets and dipole reflectors, protecting the aircraft from missiles with infrared and radar guidance systems. 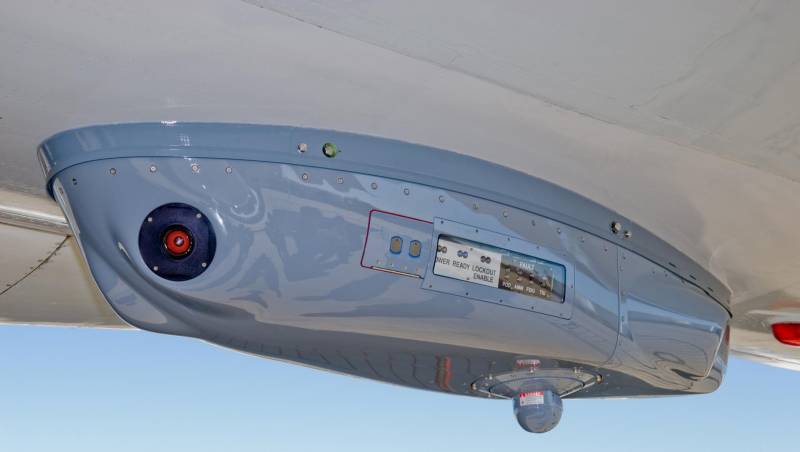 LAIRCM Security System
For safety, all aircraft-critical aircraft control systems are duplicated. There is also a fuel explosion protection system on the plane. Critical flight elements and crew locations are additionally armored with QinetiQ lightweight composite armor, which is able to withstand bullets and shrapnel up to 7,62 mm caliber.

Each AC-130J Ghostrider is equipped with four Rolls-Royce AE 2100D3 turboprop engines developing a maximum power of 3458 kW (each). The engines drive four Dowty six-blade propellers. The maximum speed of the aircraft at an altitude of 670 km / h. Without refueling, the Phantom Racer is able to cover a distance of 3000 miles (4830 km).

The combat capabilities of the Phantom Racer

Ganships are not accidentally given this name. "Flying Battery" has always been distinguished by powerful artillery weapons, which no other aircraft dreamed of. Onboard the AC-130J Ghostrider are a 105 mm gun and a 30 mm GAU-23 / A automatic gun. The latter is a modernized aviation version of the common 30 mm Mk. 44 Bushmaster II, which is widely represented on various armored vehicles. The maximum rate of fire of the GAU-23 / A is up to 200 rounds per minute. According to the U.S. military, the accuracy of the 30-mm gun completely suits them. Its 30x173 mm shells have sufficient power, and the gun itself is comparable to a large-caliber sniper weapons, which can ensure the defeat of the target from the first shot.

AC-130J Ghostrider with GBU-39 guided bombs suspended
But the 105-mm gun on planes has long remained unchanged - this is the same light field howitzer M102, specially adapted for the possibility of firing from the aircraft AC-130. The maximum rate of fire of the gun is 10 rounds per minute. On planes, this gun is kept for the simple reason that the cost of a 105-mm projectile costs taxpayers much cheaper than the cost of guided missiles or adjusted bombs.

At the same time, the combat capabilities of the AC-130J Ghostrider are not limited only to artillery weapons. The arsenal of weapons was supplemented by modern high-precision guided ammunition. So, under the wing of an airplane, you can suspend small diameter bombs GBU-39, and also use AGG-176 Griffin missiles with a laser homing head from the aircraft. GBU-39 guided precision bomb has a mass of 130 kg and a maximum flight range of 110 km (when leaving the suspension at an altitude of about 10 km). The ammunition is characterized by a large number of explosives; the explosive mass in a high explosive penetration version is 93 kg. Missiles are launched from the rear ramp, in fact, directly through the rear cargo door of the aircraft. On the AC-130J Ghostrider, air-to-surface missiles are launched from the 10-pipe Gunslinger launcher. The mass of one Griffin rocket is 20 kg, the weight of the warhead is 5,9 kg, and the maximum flight range is up to 20 km.

We are in Yandex Zen
US Air Force Special Operations Aviation
Ganshipa: a stylish means of dealing with barmalei
101 comment
Information
Dear reader, to leave comments on the publication, you must to register.