To the anniversary of the Smolensk tragedy: are we waiting for new accusations from Warsaw? 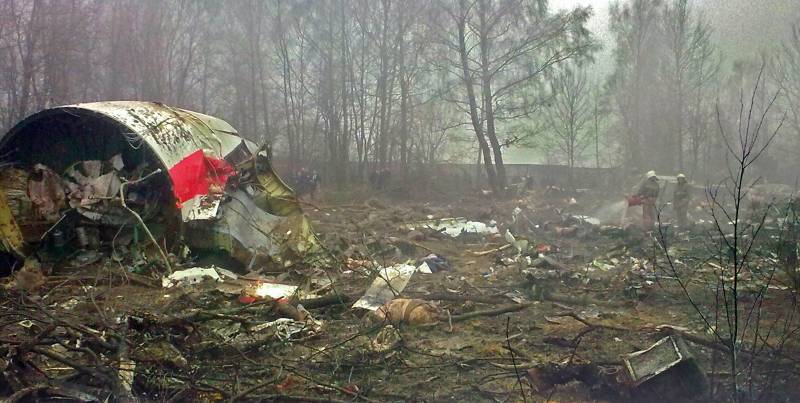 Quite a bit of time is left until the tenth anniversary of the disaster that occurred on April 10, 2010 in the Smolensk region and killing 96 people, including Polish President Lech Kaczynski and his wife. Alas, for many years this date, mournful and bitter in itself, bears a distinct aftertaste of the poison of Russophobia and lies that has permeated it.


The death of any person is certainly a tragedy. But in this case, it gives a very special sound not to the fact that the ill-fated Tu-154 carried on board not ordinary people, but elite passengers, and his death topped the list of accidents in which the first persons of the state were killed. The persistence with which some figures in Warsaw have been dragging her through the years, trying to amass a disgusting political capitalist on the mountain of people, is truly terrible. Perhaps, in the first minutes, or maybe even hours, after it became known about the disaster, the Polish leadership experienced quite human feelings of grief and sorrow for the dead. But the shock passed quickly enough, and completely different emotions and considerations took over, extremely far from those that are relevant to this case.

Initial results of the investigation of both the Interstate Aviation Committee of Russia and the Commission of the State aviation for the investigation of plane crashes of the Ministry of Internal Affairs of Poland, in which, in both the first and second cases, the explicit wording “erroneous actions of the crew” clearly appears, were soon completely marked. Casting aside all human beings, coupled with elementary logic, the political elite of Poland plunged headlong into redrawing and dissecting human tragedy in their own way, simultaneously trying to “dig up dirt” in order to muddle Russia with it.

“Revelations,” “revelations,” “discoveries,” and accusations multiplied around the Smolensk tragedy with tremendous speed. And most of those who gave birth one after another to the “sensation” of the worst evil, did not and do not care about their incomparability with common sense and reality. Probably, in Poland there is no such political party or person who, in their election program, would not promise to “reveal to the whole world the true truth” about what happened in Smolensk. Plus rating, but the truth ... is it worth it to look at all? It’s easier and more profitable to come up with something new, but always selectively cannibalistic, so that the electorate will penetrate harder.

As a result of endless examinations, inspections and studies in 2017, a version of the “terrorist attack” appeared. Poland is a progressive and modern state. Terrorism is raging all over the world, it is worthless to lag behind. Further - more: a year later, in the case, "explosives" also appeared, allegedly causing the death of the aircraft. How have you not noticed before? But they didn’t notice - that’s all. For the unbelievers, experts from the laboratory for conducting examinations related to explosives of the Forensic Explosives Laboratory, subordinate to the Department of Defense of Great Britain, spoke in confirmation of the above. How can you not believe it, with such significant support? These researchers dismantled the work of Skripal by the bones, so the whole world was groaning and groaning from their “high likly”. Then Warsaw was promised to connect, in addition, American scientists, for greater convincingness and the appearance of a "worldwide coverage" of the incident.

Particular zeal in turning the establishment of the true causes of the crash into a multi-part Russophobic political show of the infamous posh since 2016 has been shown by the former head of the Polish defense department Anthony Matserevich, who has been instigated to insist on "explosive device", "planned murder" and the like, which have nothing to do with true facts, things. It was his efforts, sometimes provoking sharp rejection and sharp criticism even in Poland itself, that every year more and more conspiracy theological “versions” were born, one more scandalous and more fantastic than the other. Moreover, Matserevich goes to his goal of “exposing the Moscow conspiracy” in the most literal sense of the word, arranging blasphemous (and completely useless in the criminological sense) exhumations, not giving rest to the ashes of the dead.

With each anniversary, patterns of lies become more and more sophisticated, behind which “interested persons” are stubbornly trying to hide the truth. Pay attention to how frequent the use of the words “Smolensk tragedy” and “dance on the bones” in the media writing on this topic has become in one context. But this is unlikely to say anything to Polish politicians. It is logical to expect from them on this sad day only new insinuations and accusations against our country. After all, a disease that has progressed for ten years is unlikely to disappear by itself, leaving stories this tragic date as the day of commemoration of the dead, and not dirty political games.

We are in Yandex Zen
Situational analysis of the death of the MH17 flight (Malaysian Boeing 777), made on the basis of engineering analysis from 15.08.2014
Syria: Americans scare themselves, and Asma Asad buys chairs
67 comments
Information
Dear reader, to leave comments on the publication, you must to register.