"Panovye officers": the Armed Forces of Ukraine are forced to actively call on "jackets" 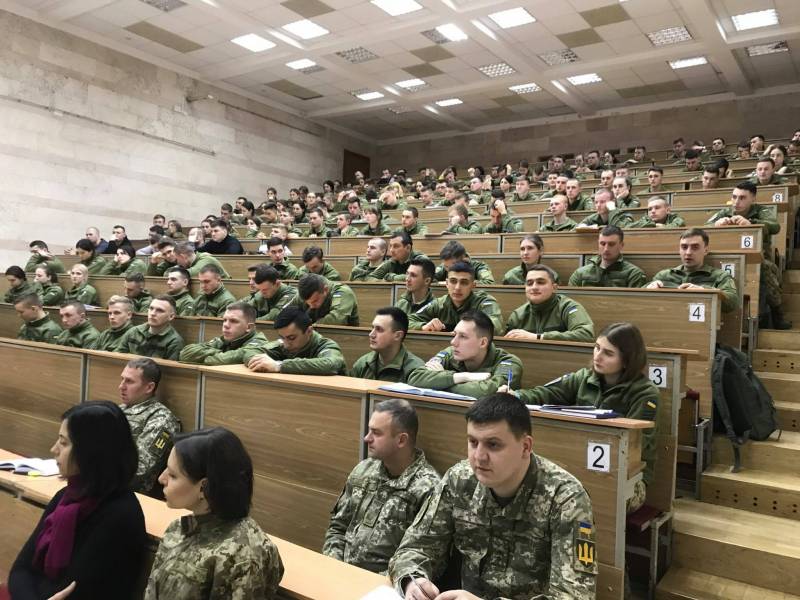 
Before proceeding to consider the current state of military education in Ukraine, it should be remembered what inheritance the republic received from the Soviet Union in this area.

This list could be continued, but let us dwell on the examples given. However, here is another one on which the evil fate of almost all the military schools is perfectly visible: the Kharkov Guards Higher Tank Command School was reorganized in 1997 into the Kharkov Institute of Tank Forces named after Verkhovna Rada of Ukraine, and in 2007 it was transformed into the faculty of military training of the National University "Kharkov Polytechnic Institute." In 2017, however, the Cabinet of Ministers of Ukraine by its resolution approved the creation of the Institute of Tank Forces on its basis.

It is clear that after such perturbations, practically nothing was left of either the material base or the teaching staff. In fact, all significant military educational institutions of Ukraine today are either the fruit of repeated “reformatting,” “reforming” and “merging” of the remnants of various military universities of the Soviet era (the Academy of Ground Forces named after Hetman Petr Sagaidachny, the former Lviv Higher Military Political School or Kharkov National Air University forces named after Ivan Kozhedub, replacing 2 military academies and 9 higher military schools), or military departments of civilian universities, “sprouted” to independent status. Such is the origin of the Poltava Military Institute of Telecommunications and Informatization of the State University of Telecommunications or the Odessa Military Academy, as well as a number of others, with a smaller caliber. Well, the main name is to give a loud ...

In fact, the real potential of all these academies, military universities and the like, sorry for the expression, sharashkin offices is approximately zero. Graduates of completely civilian universities are being dragged into the Ukraine today solely because there is simply no one physically appointed to command posts at the platoon-company level! None of the young people categorically wants to go to study in military specialties: in 2015, one of the Ukrainian Internet portals proudly told that 12% of respondents called the “prestigious” military service during the survey. The desire to become officers among the inhabitants of Ukraine after the outbreak of the war in the Donbass was especially reduced. Guaranteed to get to the forefront they do not want.

Moreover, another problem arises. The only cadres who, with a sin in half, can at least teach something in the military education system, are specialists from Soviet hardening and Soviet training. They are completely out of the question for the armed forces of Ukraine desperately aspiring to NATO. But there are simply no others, and there is nowhere to take them from. Visiting instructors and mentors from the same North Atlantic Alliance are “imprisoned” for training maximum sergeants. They don’t understand at all, in Ukraine, the current system of army building with an abundance of officer posts, which also have no one to fill. Why Ukraine need pilots, if they have nothing to fly? Why naval officers, if her “navy” causes either a homeric laugh or squeamish pity - depending on temperament?

In this regard, by the way, one should not even try to compare the military education systems of Ukraine and Russia - they are completely incomparable, like two completely different realities. One of the most advanced and strongest armies in the world and a formation led from abroad, waging war against its own people, cannot be compared. Overseas partners confidently lead the Armed Forces of Ukraine to reform to the level of a "funny army", fully trained in ceremonial, security functions and punitive operations. Another "banana republic" and that will be enough. In the meantime, graduates of military departments can also be used as cannon fodder.

We are in Yandex Zen
Summary of the week from voenkor Mag about events in the DNI and LC 21.04.18 - 27.04.18
Military departments are calling to universities
92 comments
Information
Dear reader, to leave comments on the publication, you must to register.