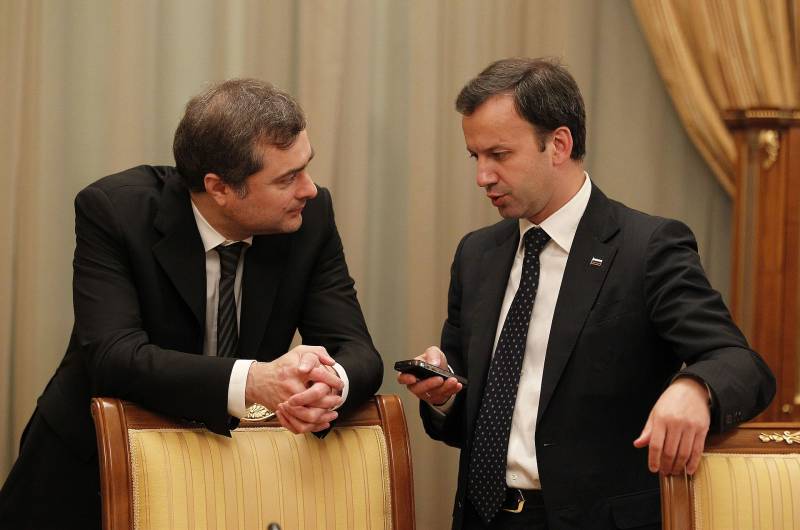 From the Ukrainian direction of Moscow, Presidential Aide Vladislav Surkov, who supervised it, left. Moreover, he resigned of his own free will, as reported in an interview with political analyst Alexei Chesnakov. “In connection with a change in context” of Russian policy in Ukraine.

The king is gone. Long live the king!

Presidential spokesman Dmitry Peskov objected that there was no “change of context” in Ukraine, as he was still determined by the president of Russia. However, Surkov somehow left, which means that some gears turned around somewhere. In an interview, he made a sensational statement that “there is no Ukraine. There is Ukrainians, a specific disorder of minds and ... bloody local history. " The rejection of this thesis is “changing the context”? What then “context” is the transition to?

I must say that Surkov left the Ukrainian direction, in fact, not alone, but with Kurt Volker, the American special representative: the Surkov-Volker tandem, which had once had so many different hopes, was already forgotten, as if it hadn’t been . But this tandem was, its “context” has definitely changed, perhaps this is what Surkov had in mind.

Instead, a new “tandem” appeared: Kozak - Ermak, which has some other hopes, but the president of Russia will still determine the “context” for him, as Dmitry Peskov reminded. What is this “context"?

On this occasion, it seems, Dmitry Yarosh, a “bloody local historian,” according to Surkov, spoke out. For no reason, he told the world about the “Kremlin plans” for the collapse of Ukraine by 2024 with the help of the Minsk agreements.

As we recall, Dmytro Yarosh was the leader of the armed vanguard of the “Guinness Revolution”, he is probably well informed, his close ties with ex-president Poroshenko are also known - this is a serious warning to Zelensky and his team.

Recently, Foreign Minister Sergey Lavrov also raised this issue, unusually sharply saying that we don’t need the next “Norman summit” for the sake of the summit, Kiev must first implement the decisions of the previous Paris summit.

Moscow makes it clear: because instead of normalizing in the Donbass, there is a new aggravation, the "Norman Summit" in April in Berlin is unlikely to take place. Moreover, Lavrov diplomatically but unequivocally reproached his French and German colleagues for not doing anything to fulfill Kiev’s agreements. This is also, perhaps, the first time in such a sharp form.

Moscow is annoyed that Zelensky in Paris refused the previously agreed withdrawal of troops along the entire demarcation line in the Donbass, and therefore had to make corrections to the Paris communiqué following the meeting at its very end. Therefore, Lavrov added that a final document still needs to be agreed upon at the Berlin summit, and this can be very difficult to do.

In our opinion, there are no former statesmen. Surkov, although retired, is deeply in the subject of Ukrainian events. Kurt Walker is also retired, but he can “emerge” in Ukraine, and then Surkov will have to “emerge”.

With the arrival of Zelensky in Kiev, a new game began, it demanded new faces, and a new Kozak-Yermak tandem appeared, without the obvious presence of the Americans. But this does not mean that Washington is not participating in this game. We will see the first results in April, which is scheduled for the next meeting in the "Norman format" in Berlin.

We are in Yandex Zen
Interview of V. Putin to Channel One and the Associated Press Agency
What you didn't want to know about England
65 comments
Information
Dear reader, to leave comments on the publication, you must to register.