Zulfikar. The sword of the prophet in the Caucasus 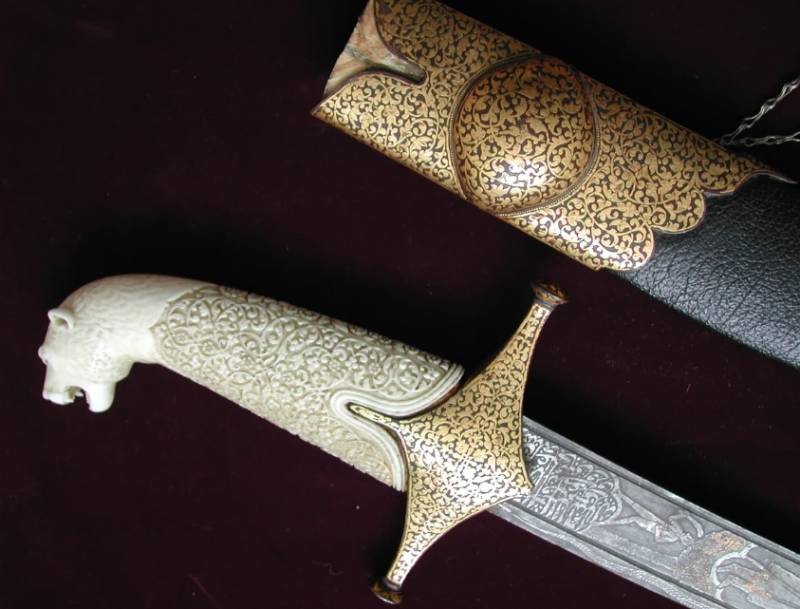 According to legend, Zulfikar is the most famous sword of pre-Islamic Arabia. This unique sword belonged to one of the noble representatives of the Quraishite tribe from Mecca - Munabbiu ibn Hajjaj. The Quraysh, who own Mecca, but not all converted to Islam, became natural opponents of Muhammad, who in Medina began to form an army. The first clashes were minor until March 624.

On March 17, 624, the Battle of Badr took place (the western part of Saudi Arabia in the Medina region). This battle was of little military significance, since on both sides the death toll did not exceed 7% of all participants in the battle. However, the political and religious significance of the Battle of Badr cannot be overestimated. The most amazing legends began to compose about her. According to one of them, on the side of the Muslims ... angels fought. One way or another, but this was the first battle in which Muhammad showed his strength and his army. 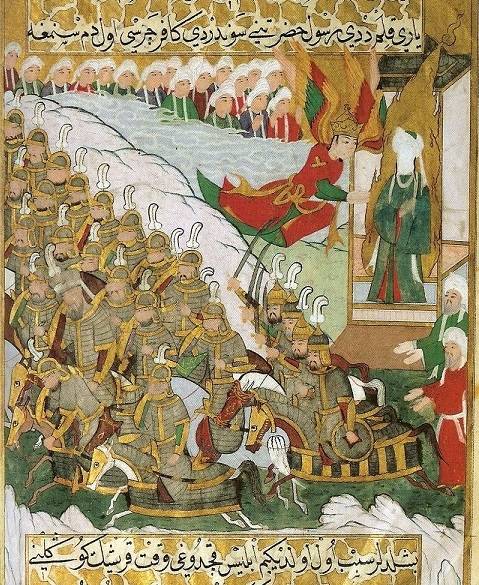 Battle of Badr
At the same time, Muhammad was a passionate collector weaponsin particular swords. During the traditional division of the trophies, the prophet fell into the hands of a beautiful sword - Zulfikar, who once belonged to Quraish Munabbi. Due to the fact that Zulfikar fell into the hands of the prophet himself, human rumor quickly endowed him with miraculous properties and unprecedented impact power.

After the death of Muhammad, the sword fell into the hands of Caliph Ali ibn Abu Talib, who was considered a great warrior. Even then, the sword supposedly knew how to hang in the air, and the power of its blow increased every day until it became equal to the blow of a thousand soldiers. And here comes the moment when folklore and religion finally erase historical the truth. According to the Sunni version, Zulfikar went to the Ottoman sultans through the hands of the sons of Ali and is now kept in the Topkapi Palace Museum in Istanbul. The Shiites believe that the sword passed into the hands of the imams and is now hidden with the twelfth imam al-Mahdi, who will appear before the end of the world.

The same legends and myths that surround the origin and history of Zulfikar completely clouded his appearance. There is a legend that one of the owners of the sword, Caliph Ali ibn Abu Talib, once committed negligence by removing it from its scabbard, which caused the blade to split in half. At the same time, one side of the sword was given only the opportunity to kill, and the other - to heal. From such a very vague legend, many views on Zulfikar appeared. 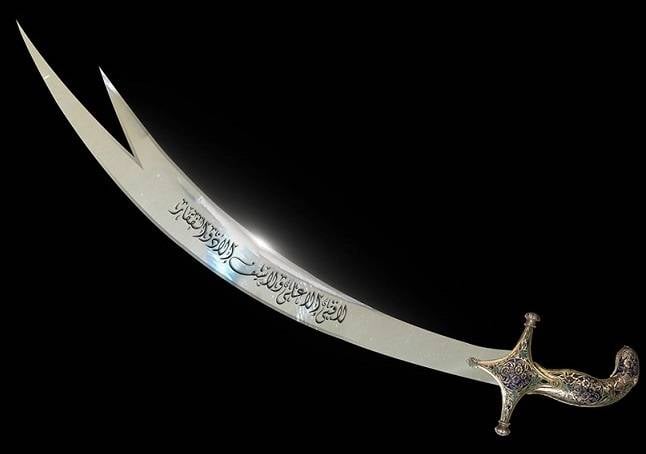 Some believed that the sword was actually a saber with two points. Others claimed that under the forked blade due to inaccuracies in the retelling of the legends was simply a double-edged sword. Some even saw Zulfikar as a sword with a single, in fact, a blade, but dissected by a lobe. There was an opinion that Zulfikar took the form of a Turkish scimitar, despite the fact that scimitars are much “younger” than the events of the beginning of the 7th century. Most likely, such views formed due to the fact that the Ottomans claimed succession from Muhammad.

It is not necessary to talk about some exceptional fighting qualities of Zulfikar, except in legends. However, the sword carried a powerful political and ritual implication. Not for nothing that the same Turkish Janissaries decorated their banners with the image of Zulfikar, more precisely, with the way they saw him. Zulfikar was also placed on the graves of fallen soldiers. And on the blades it was often possible to meet such an engraving: “There is no sword except Zulfikar, there is no hero except Ali!”

The possession of such a sword among the military leaders and nobility almost automatically created an aura of communication around them, not with anyone, but with the prophet himself and his imams. And, of course, it boosted the military spirit. Each battle became a battle, not just for land and wealth, but for faith, and this is a powerful factor in motivation.

Nadir Shah and his Zulfikar

Nadir Shah Afshar, the founder of the Afsharid dynasty and the Shahins of Iran, looked at the Caucasus as his patrimony. Despite the internal fragmentation of his empire and endless intrigues, Nadir, being a military leader and leading a nomadic way of life, in 1736 won the East Caucasus from the Turks, annexing Shemakha, Baku and Derbent to the empire. During its heyday, the empire of Nadir controlled not only Iran and Azerbaijan, but also Armenia, Georgia, Afghanistan, the Khanate of Bukhara, and in 1739 Nadir stormed Delhi in India. 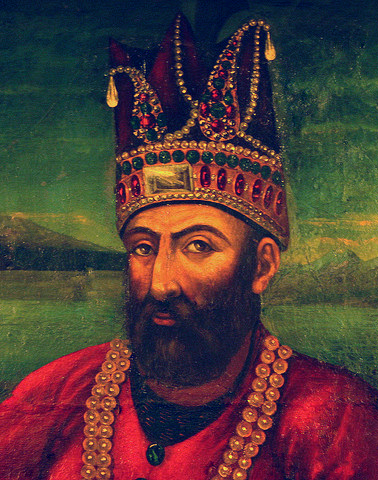 Nadir shah
According to legend, Nadir Shah was the owner of an elegant Zulfikar. Some believe that this may well be the sword of the prophet himself, but there is no reason to believe this in principle. However, this does not in any way detract from the legendary character of Zulfikar Nadir Shah. The famous Avar poet Rasul Gamzatov dedicated the following verses to this sword (saber):

King of kings - the great Nadir
I glorified, sparkling and ringing,
And in twenty campaigns he is half the world
Could conquer with the help of me.
Nadir Shah, considered a great conqueror, began a campaign against Dagestan in 1741, led by an army of 100 to 150 thousand soldiers. The great army was divided and moved to conquer the fragmented Dagestan in different ways. At the same time, the local khanates and their rulers were preparing for a long war, which Nadir did not expect. The war dragged on for years with varying success for both sides. As a result, the shahinshah’s campaign ended in failure.

Naturally, this war could not but find reflection in folklore. The Avar epic “The Battle with Nadir Shah” and the Sheki song “Epic about the Hero of Murtazali” saw the light of day. There was a place in the legends for Zulfikar Nadir. In this case, the conqueror Zulfikar was very different from those described above. It was a sword with two blades mounted on one handle. There were legends about him, according to which the whistle of the wind in this sword with a wave stunned the enemy and terrified him. The Shahinshah so skillfully wielded his sword that, upon impact, the blades closed in the victim's body and pulled out a piece of meat at once. With a blow to the head, Nadir could immediately cut off both ears of the unfortunate one.

All the same legends say that the loss of the famous sword in battle was the cause of the defeat of the Shakhinshah in Dagestan. One way or another, but along with the war, Nadir Shah brought to the land of Dagestan a surge of fashion for the Zulfikars. Famous Dagestan masters from Kubachi and the now abandoned Amuzgi created real masterpieces of jewelry art. Despite the inapplicability in battle, until the beginning of the 20th century, small batches of elegant Zulfikirs from Kubachi and Amuzgi found their buyers.

Now in the Dagestan museums are stored two Zulfikara, the owner of which could be Nadir Shah. One sword is kept in the village of Kubachi, and the second in the Dagestan State Joint Museum in Makhachkala. At the same time, some consider it to be the Kubachi sword Nadir’s sword, while others consider the sword from Makhachkala. However, there is no clear historical evidence for either. 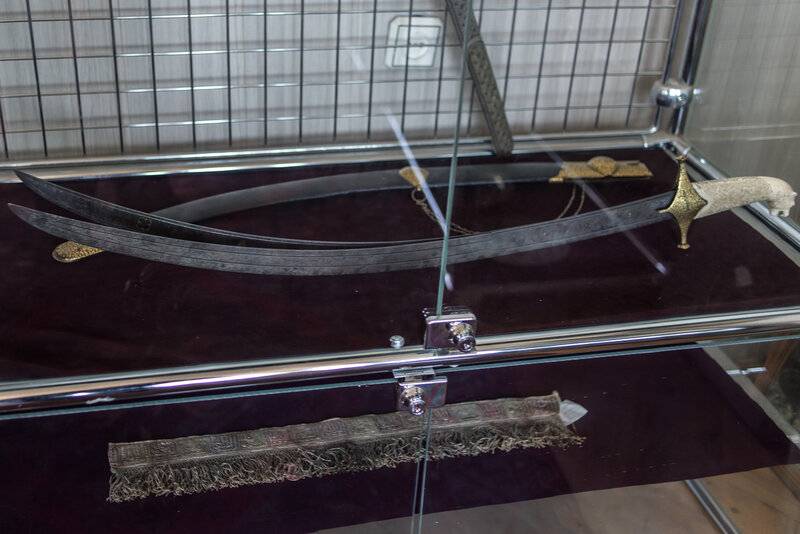 Kubachinsky Zulfikar
But the author is more interested in the Kubachin instance. Kubachi, located in the mountains at an altitude of about 1700 meters above sea level, has long been famous for its craftsmen. In 1924, the artisan artel was organized in the village, which eventually grew up in the Kubachi art factory. A small museum now operates at the plant. It is in it that Zulfikar is stored with an unusually thin engraving on the handle in the form of an animal head.

According to the deputy director of the plant Alikhan Urganaev, there is no documentary evidence that the Kubachi Zulfikar belonged to Nadir Khan. But one of the main arguments for the apologists of the Kubachin theory of Nadir Shah and his sword is the fact that it was the museum of the plant that was repeatedly subjected to robbery. And each time the robbers hunted for the Zulfikar.

For the first time in 1993, the robbery was weighed down by the murder of one of the watchmen. But the police worked quickly. From a helicopter it was possible to find a car of criminals, which could not cope with the mountain "serpentine". The sword returned to the museum, and the robbers were sent to prison. At the same time, a rumor passed that the customer of the robbery was one of the Iranian billionaires, ready to give a million dollars for a sword.

In 2000, when the Caucasus flared up again with war, the Kubachin Zulfikar was again threatened. Gangs of militants from Chechnya hoped to seize the sword, which, according to legend, endowed the owner with powerful force. Fortunately, the work of arms art was not affected. 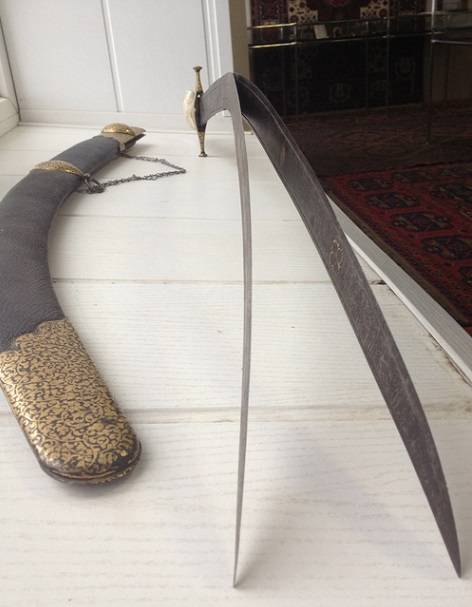 The last time the robbers managed to steal a sword in June 2017. The crime was straightforward. Taking advantage of the fact that the museum, like the combine, was guarded by only one watchman, who needed a lot of time to go around the whole complex of buildings, the robbers got inside, breaking the door, and simply carried out almost 30% of the exhibits. Among the six graceful sabers was Zulfikar.

Power departments were raised to their ears. The national relic, which is the property not only of Dagestan, but of the whole of Russia, could well have sailed abroad. Moreover, its value was estimated from three million rubles to two million euros. Therefore, the Kubachintsy did not even dream that the relic would ever be returned. Fortunately, they despaired early. Employees were able to enter the organizer of the theft and its participants under the guise of buyers. As a result, it turned out that the organizer (a native of Dagestan) and the performers met in places not so distant, then made a crime plan.

Zulfikar and all other stolen artifacts returned to their native museum.

We are in Yandex Zen
The establishment of Soviet-Saudi diplomatic relations
"The rabble of the dervishes" against the "tigers of the desert"
89 comments
Information
Dear reader, to leave comments on the publication, you must to register.