Is there a way out of the Syrian “maze”: on the interests of the parties 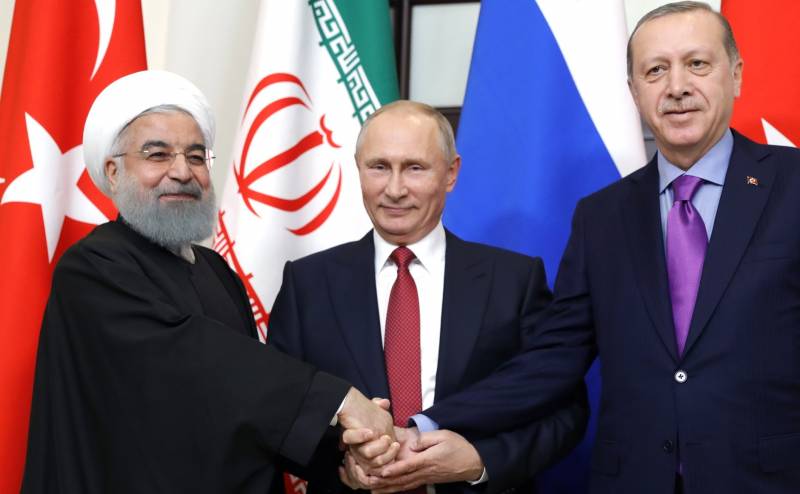 The talks between Vladimir Putin and Recep Erdogan, scheduled for March 5, give hope for an end to at least the most acute phase of the confrontation in Syrian Idlib, which risks escalating into a full-blown armed conflict, whose participants are likely to be not only Russia and Turkey. However, even in the event of a temporary relaxation of tension, the main problems will most likely remain relevant, the first of which is the need to establish a permanent and stable peace in Syria. Is this achievable at all and on what does the arrival of peace on this long-suffering land depend? Is there a way out of the Syrian "maze"?

It’s worth trying to find an answer to such a difficult question with at least a brief overview of the interests and goals that the main forces that are present and active in the region are pursuing today. Letting go of Ankara’s imperial plans to create a quasi-state unit in northern Syria that is completely under its control or to join it in Turkey. Focus on the “minimum program” for Erdogan. This is causing maximum damage to the Kurdish armed forces, pushing them as far away as possible from the borders of Turkey, in fact, and providing an opportunity for their own armed forces to operate against the Kurds in the same Afrin.

However, this is only half the battle, and at the moment, alas, less. Having got involved in fights in Syria, Ankara suffered significant losses and now the main thing for it is to exit the fighting with minimal loss of face. This is especially true for Erdogan personally, who recently has absolutely nothing to brag about on either the domestic political or the economic fronts. If a small, but not at all a victorious war is added to this, the business for the president could end up very badly. On the one hand, he understands that further escalation is fraught with even greater sacrifices, on the other hand, he can no longer stop.

For Russia, the demands put forward by the Turks to "step aside" and withdraw their troops from Syria are clearly completely unacceptable. This would mean a complete collapse of the entire policy of Moscow, not only in this country, but also in the Middle East as a whole. And not only there, perhaps. Money, human lives, diplomatic and military efforts - everything will be thrown to the wind. It is unprofitable to quarrel with Ankara, I do not want to, but to capitulate in front of her - to sign her own inability to defend the interests of her allies and her own in a critical situation.

The Syrians are fighting and dying in Idlib for the most, perhaps, simple and unambiguous reasons. The elimination of the "adder" there and the control over strategic highways are vital for Damascus to begin the process of rebuilding the country from the ruins into which it was plunged by a long war. To achieve internal stability, without which it will await the fate of Libya. And this is not the worst case. The Syrians will not retreat under any circumstances.

Iran has its own interests in Syria - at least it is a territorial buffer between the Islamic Republic and Israel, which Tehran would not want to see pro-American and pro-Israeli.

Everything is simple with Europe: its leaders are scared to hiccups by the prospect of new waves of refugees, especially since Erdogan has already very kindly conducted a “substantive demonstration” of what strength and power they can be. Europeans, as usual, are ready to pay off, to act as peacekeepers, but just not to host new hundreds of thousands of war-destitute exiles from the Middle East. It would be extremely tempting for the United States to continue to fan the fire of war in Syria, and, even better, still get rid of the Bashar al-Assad that he hates and annoy the Russians as much as possible. Well, the Turks at the same time - for treachery and inconstancy. However, in light of the upcoming elections, Washington is unlikely to intervene on a large scale in the conflict. Rather, he will wash his hands and wait for the results.

Based on all this, the near future, not only of Idlib, but of the whole of Syria, to the greatest extent depends on whether the leaders of Russia and Turkey can find a clear compromise. An intermediate solution would be to move the situation to a level at which each side will get its own without big battles and frontal attacks, without advertising both the concessions made as a result of reaching agreements and the “bonuses” received in exchange for them.

In this case, Turkey will have to decide what is more important for it - solving problems with the Kurds or supporting the gangster anti-Assad "opposition". Damascus, obviously, still has some time to put up with the last pockets of resistance of its most irreconcilable enemies, not trying to completely eliminate them. For the sake of the opportunity, having gained control of the M-4 and M-5 routes, they can begin to restore the economy and infrastructure, they can do it there. It is important for Russia, having stood the pressure of Erdogan, not to give up its interests and, without diminishing its own presence and significance in the region, once again act as the most balanced and wise player in the Middle East.

We are in Yandex Zen
Turkey vs Russia: what is happening in Idlib?
The attack on the Russian aircraft and the political situation in Turkey
29 comments
Information
Dear reader, to leave comments on the publication, you must to register.