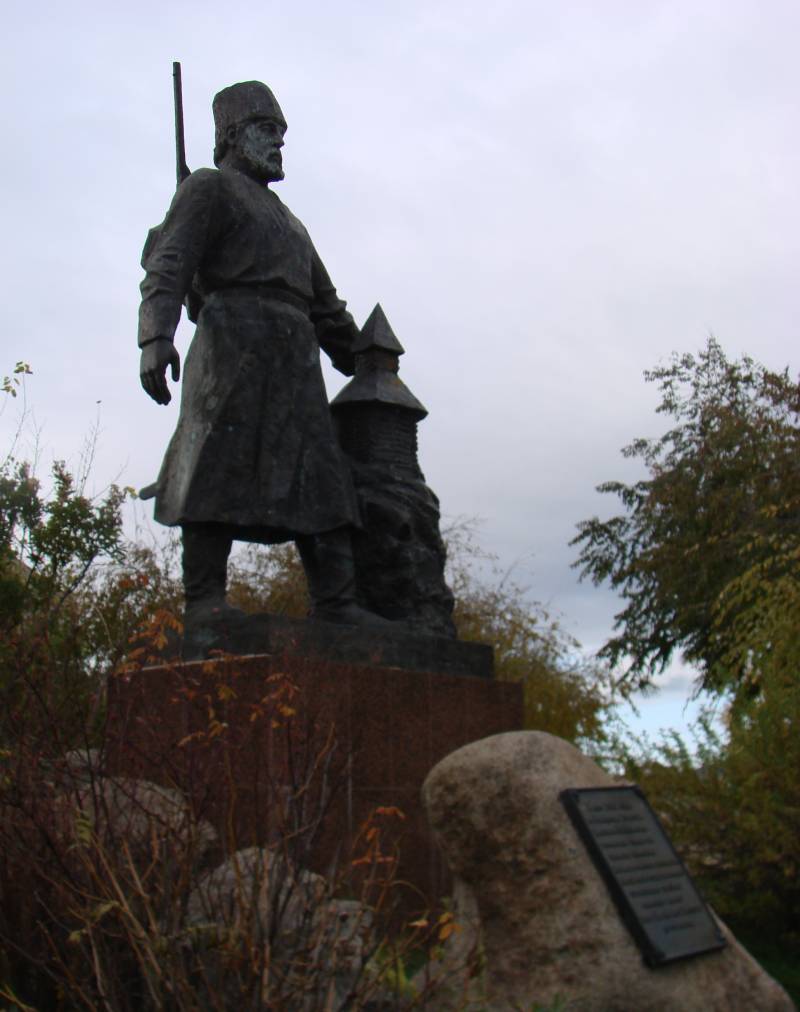 Monument to Beketov in Chita

The efficient owner of Yakutia

It’s difficult to say exactly when and where Beketov was born. Probably somewhere in the beginning of the XVII century. But in 1627, our hero was already a centurion in the Yenisei prison - a position that anyone would definitely not trust without experience.

Already in the next year, 1628, Beketov, taking 30 archers and 60 who were eager for adventure and profit of industrialists, set off on his first expedition, known to us (but certainly not the first, in principle). The task was familiar by the standards of time and place - to beat the local Tungus, attacking the Russian people. Along the way, Beketov, as a thorough man, did not forget to lay a small prison near the confluence of the Rybnaya River in the Angara. And along the way, I still collected yasak (tribute) from local tribes - almost 700 precious sable skins.

A few years later, in 1631, our hero went well to the Lena River. And there he laid the Lensky prison - the first Russian fortification in Yakutia. And not just laid, but launched a vigorous activity. Starting from the registration and taxation of duty on the production of sables, made by the hands of those same 60 industrialists, and ending with the establishment in the wild of the judicial system.

The latter was intended for all the same Russian beast hunters. When they could not share what was trapped or crossed the road in a different way, the debaters went to Beketov - the embodiment of state power in the vastness of Yakutia. And they received a verdict - not for free, of course, but by paying a fee with the same sables. The accumulated duty, almost a hundred skins, from Beketov, which is typical, did not disappear anywhere, but was delivered to the Yenisei prison in 1633. This, however, was a trifle against the background of the state’s total income from a campaign on the Lena - as many as 2500 sables.

Beketov further served on the Yenisei, then returned to the Lena to found new fortresses and beat the rebellious (not all of them were) Yakuts. He also wrote petitions to Moscow in the spirit of “increase my salary” or “let us trade in slaves from the natives.” He had reasons, however: back in 1641, Beketov’s campaigns brought the treasury 11,5 thousand rubles — colossal money for those times.

In general, he lived a normal life on the Siberian frontier.

Huge money was made on furs in Siberia of the XNUMXth century - sable skins were real oil deposits of their century. The fur was called “soft gold,” and anyone was happy to lay their hands on it.

But real gold was still cooler.

Furs were put into circulation as the equivalent of money not from a good life. They occupied a considerable amount during storage and could deteriorate. And not all attempts to pay them in foreign countries were obviously doomed to good luck.

But there was nowhere to go - everything was bad with precious metals deposits in Europe. Their influx came either from the Spanish possessions in America, or from the Muslim East. To join this club having independent sources of gold or silver would be considered any country as the greatest luck. 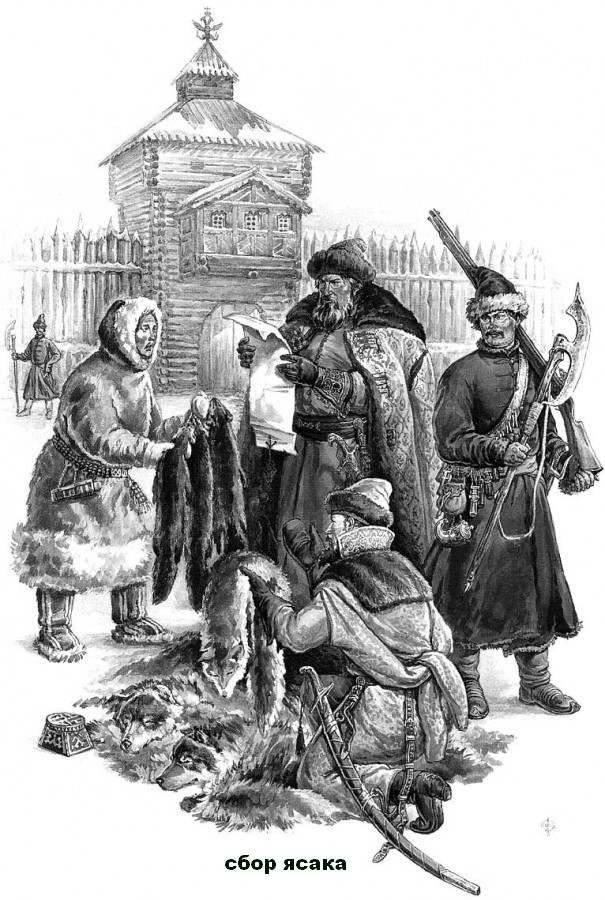 Furs were the main wealth of Siberia. But the idea that there might also be silver, many "blew away"
And when rumors began to circulate around Siberia that somewhere on undeveloped lands there were deposits of silver, the pioneers seriously strained. It seemed that an even more tempting jackpot loomed ahead.

Race between the jails

Unfortunately, the rumors were not supported by reality - the pioneers saw silver from the natives, and thought that the deposits were nearby. In fact, the precious metals came to them through third and tenth hands, and the primary source was contacts with China. But even in the form of a mirage, thoughts about silver were too strong, and provoked real competition.

In the case of Beketov, the main competition was between the Yenisei (that is, him) and the Krasnoyarsk prison. The question was simple - whoever settles first behind Lake Baikal will put up his fortifications, make connections, and, therefore, remove the main profits from silver deposits. And no one thought to doubt that they would be found there.

It only remained to assemble an expedition earlier than sworn friends.

Yenisei voivode Afanasy Pashkov approached the matter creatively and used the alcohol monopoly. That is, he began to sell vodka at an exorbitant price - the sable hunters still had no choice. And the money for the expedition was quickly accumulated.

In June 1652, a detachment of a hundred Cossacks - the most serious force by the standards of Siberia - set out on the road. At the head of it was put Peter Beketov.

Transbaikalia was not an absolute white spot - fragmentary information was available about the territory from individual people who came there as part of small groups. Therefore, Beketov’s detachment did not move at random.

The key to controlling the region was the Shilka River. Having fixed on it, it would be possible to send detachments along this river and its numerous tributaries. Moving on water would give speed - that is, the ability to quickly respond to unexpected events in a hostile land. Therefore, Beketov moved there. 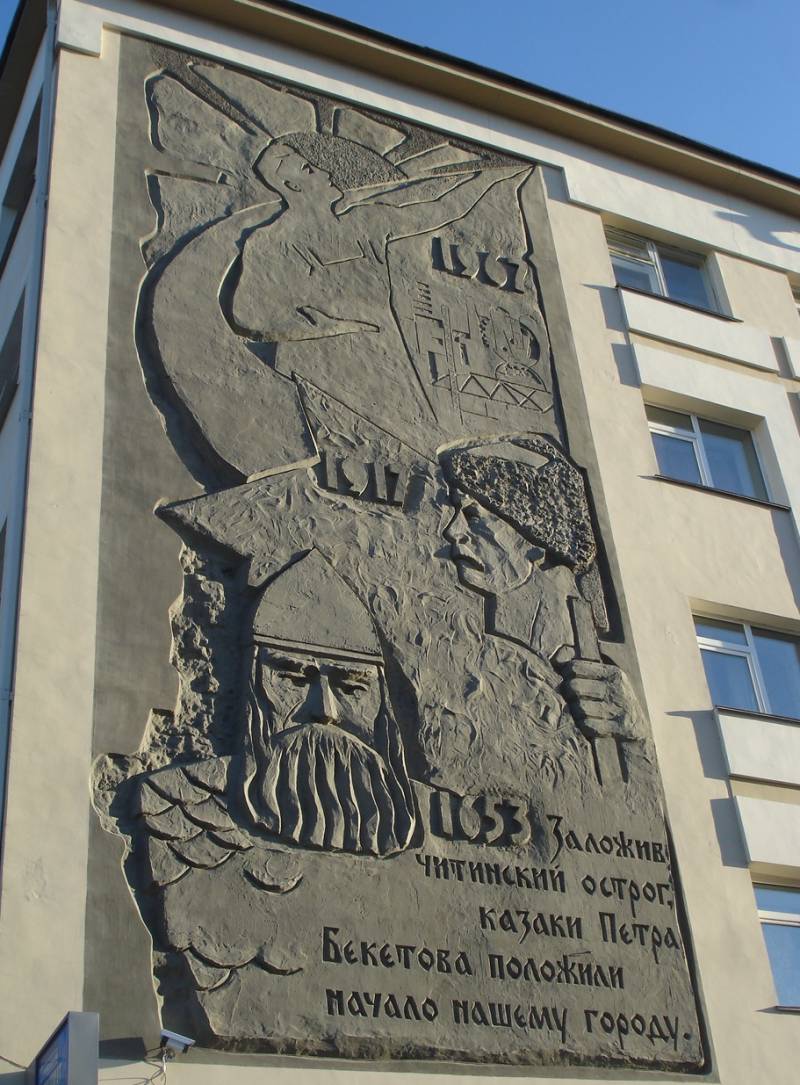 Another (indirect) monument to the hero of our article in Chita
On the way he was constantly harassed by the Buryat raids. They managed to either beat off or avoid, quickly moving through the water - so as not to waste energy. But to get to the intended goal in one season did not work, and the Cossacks were forced to stop for the winter.

So that people do not get bored, Beketov allocated a group to visit the Buryats - so that it was not inconsequential to rob Cossacks on a campaign. The visit was successful - the natives were taken by surprise and beaten hard. In one of the settlements, they captured the wife of a Yakut prince, who regularly paid yasak to Russians. The Russians not only did not touch the wife who was visiting relatives, but also brought them back to Yakutia under guard - if necessary, Beketov easily used force, but he respected the agreements and tried to maintain good relations.

The whole next year was spent on the construction of prison camps on the tributaries of the Shilka and in general on the development of new territories. Much attention was paid to the collection of tribute - a solid sable treasury of 760 skins was sent to the Yenisei prison.

It only remained to establish a large prison directly on Shilka itself. But here the problems began - the local Tungus, apparently having heard about the successes of the Russians in the west, decided to unite and “pick up” Beketov before he managed to settle down. Understanding perfectly that if this is not done now, then it will be impossible to drive away the guests by any means.

They managed to lock the Cossacks in a small winter hut - without bread and horses, surrounded by enemy crowds, they would sooner or later simply die from starvation. There was only one way out - to build rafts and, under cover of night, go to where the current would carry. And it carried to the Amur River.

In the summer of 1654, Beketov and his Cossacks connected with the people of Onufriy Stepanov. A few months later they were faced with the troops of Manchu China - the first truly serious state in all the decades of the Siberian epic. But this is completely different история.

Beketov managed to take part in the defense against the Chinese of the Kumar prison. On this his traces are lost. It is believed that the pioneer lived at least until the early 1660s. Having probably still served a lot to continue expanding Russia.

We are in Yandex Zen
New land Cossack Dezhnev
Peter Beketov - the right conquistador
188 comments
Information
Dear reader, to leave comments on the publication, you must to register.