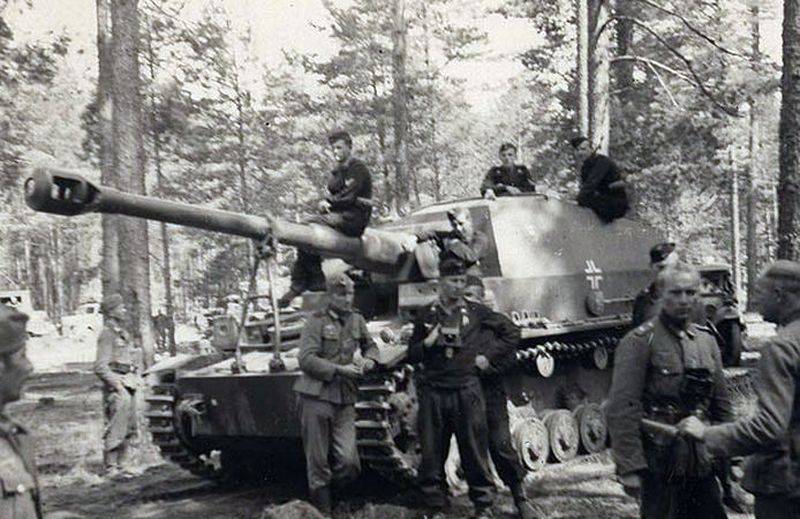 The Second World War, which became the first real war of engines, gave the world a huge number of new weapons. Tanks, who began to play an increasingly important role on the battlefield, turning into the main striking force of the ground forces, broke through the enemy’s field defenses, crushed the rear, closed the encirclement and burst into cities hundreds of kilometers from the front line. The increasing spread of armored vehicles required the appearance of adequate countermeasures, one of which was anti-tank self-propelled guns.


In Germany, during the Second World War, a whole galaxy of tank destroyers was created, while the first projects, which included the 10.5cm K18 auf Panzer Selbsfahrlafette IVa self-propelled gun, nicknamed Dicker Max (“Fat Max”), began to be developed in the late 1930s x years. Armed with a 105-mm gun, the self-propelled gun was built in the amount of two prototypes in early 1941, but then it never came to mass production. Today, the most powerful tank destroyer of the initial period of World War II, the shells of which pierced all the tanks of the allies of those years at any combat distance, is presented only in computer games: World of Tanks and War Thunder, as well as bench model. Until today, instances of self-propelled guns have not been preserved.

The story of the self-propelled gun Dicker Max

German designers turned to the idea of ​​building a powerful self-propelled gun armed with a large-caliber artillery gun at the beginning of World War II. The main purpose of the new combat vehicle was to combat various enemy fortifications, including pillboxes. Such a machine became even more relevant in the light of the upcoming campaign against France, which built along the border with Germany a powerful line of fortifications, known as the Maginot Line. To deal with long-term firing points, a serious caliber was required, so the designers opted for the 105-mm sK18 gun.

Although the development of a new self-propelled gun began in 1939, no ready-made combat vehicles were built by the start of the campaign against France. The process of developing a self-propelled gun, originally called Schartenbrecher (bunker destroyer), lasted about a year and a half. It is worth noting that the designers of the Krupp plant did not particularly rush into this project, especially after France capitulated on June 22, 1940. German troops bypassed the Maginot Line, and in some places managed to break through and crush the defenses of the French troops without using various exotic weapons.

The first built prototypes of the new self-propelled guns were shown personally to Hitler on March 31, 1941. Then began a discussion of the concept of a new application of self-propelled guns. By May, it was finally decided that the main specialization of vehicles would be the fight against enemy tanks. At the same time, the Germans even then began to discuss options for the construction of other tank destroyers armed with, among other things, 128 mm guns. The Germans expected to use the new armored vehicles on the Eastern Front, where they planned to use self-propelled guns to combat heavy Soviet tanks.

At the same time, the German army already in 1941 had enough forces and means to fight both the T-34 medium tank and the KV-1 and KV-2 heavy tanks. In the Wehrmacht, already in the summer of 1941, there were sufficient ammunition shells that made it possible to hit the T-34 aboard even from 37-mm anti-tank guns. 50 mm anti-aircraft guns coped with this task even more confidently. In emergency cases, 88-mm anti-aircraft guns and 10 cm schwere Kanone 18 heavy field guns came to the rescue, which the Germans widely used against heavy Soviet KV tanks. 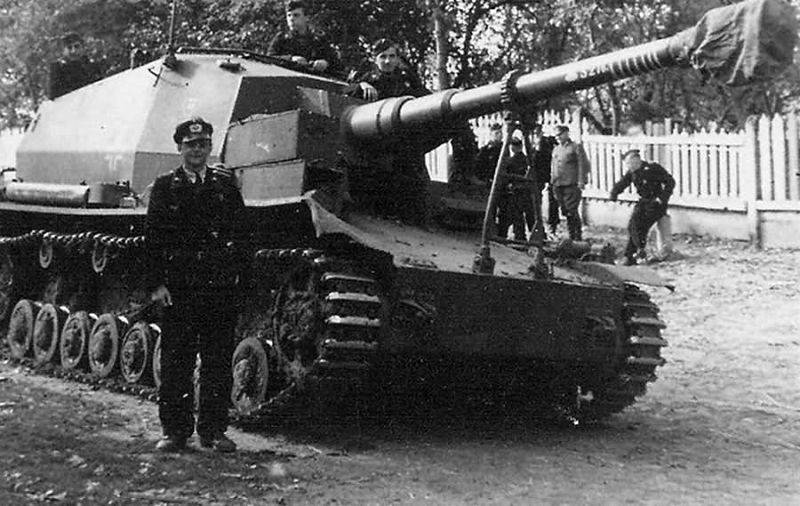 Despite the fact that the Flak 36 anti-aircraft gun became a lifesaver for the Germans, this gun, like the sK105 18-mm infantry gun, was bulky, clearly visible on the ground and inactive. That is why work on the creation of self-propelled anti-tank guns was forced, and two prototypes of the 105-mm tank destroyers built, designated 10.5cm K18 auf Panzer Selbsfahrlafette IVa, were sent to the front to undergo full-fledged field tests.

As a chassis for self-propelled guns, the PzKpfw IV medium tank, well developed by the German industry, was used, which became the most massive Wehrmacht tank and was produced until the end of the war. With the modification of the tank PzKpfw IV Ausf. E German designers dismantled the tower and installed a spacious open cabin. The implemented layout solution was traditional for a huge number of German self-propelled guns during the Second World War, however, with some features. So in the front part of the body of the new self-propelled gun were two box-shaped deckhouses with sight slots. And if one of them was the workplace of the driver (left), then the second was false, there was no workplace for the crew member in the right cabin.

The cabin of self-propelled guns was distinguished by a sufficiently strong reservation for German armored vehicles of the initial period of World War II. The gun mask had a thickness of 50 mm, the thickness of the main armor of the frontal part of the wheelhouse was 30 mm, while the armor was installed at an angle of 15 degrees. From the sides the cabin was armored weaker - 20 mm, booking aft - 10 mm. Above, the cabin was completely open. In a combat situation, this increased visibility from the car, but at the same time made the crew more vulnerable. Fragments of shells and mines could fly into the open cabin, and the machine also became vulnerable to air raids and military operations in cities. To protect against bad weather, the self-propelled crew could use a canvas canopy. 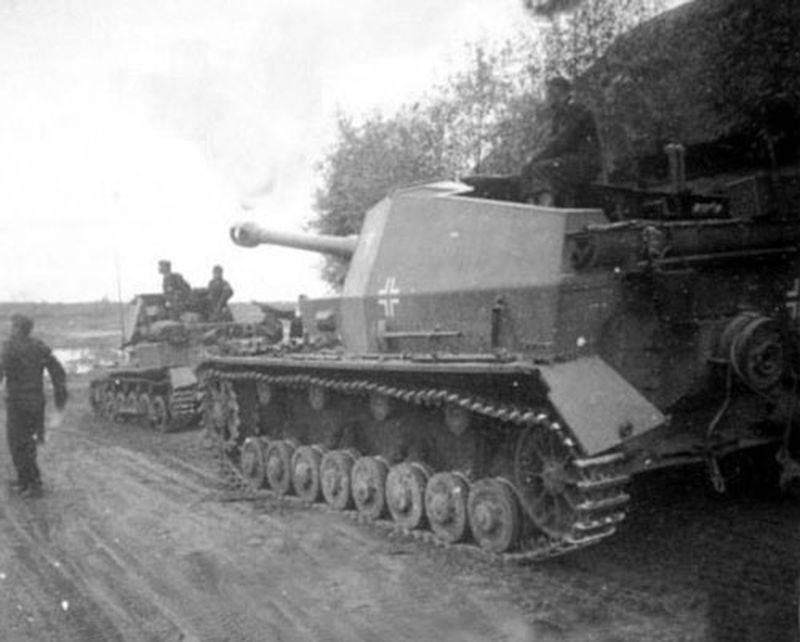 The main weapon of the self-propelled gun was a powerful 105-mm gun. The K18 gun was created by the designers of Krupp and Rheinmetall based on the sK18 heavy infantry gun. As practice has shown, this weapon made it possible not only to effectively deal with various fortifications and field defense of the enemy, but also with well-armored armored vehicles. True, the ammunition of the gun was small, in a self-propelled gun it was possible to place only 26 shells, which were located along the sides of the hull in the aft of the cabin. The charging system is separate.

The K105 18-mm gun with a 52-caliber barrel could easily deal with any Soviet heavy tank, as well as with any Allied tank. At a distance of 2000 meters, an armor-piercing projectile fired from this gun pierced 132 mm of vertically arranged armor or 111 mm of armor mounted at an angle of 30 degrees. The effective direct range of high-explosive shells was up to 2400 meters, armor-piercing - up to 3400 meters. The gun’s advantages also included good vertical aiming angles - from -15 to +10 degrees, but horizontal aiming angles let us down - up to 8 degrees in both directions.

There was no defensive armament on a self-propelled gun, since the machine had to fight against enemy fortifications and tanks at long distances. At the same time, a single MG34 machine gun could be transported in the laying, which did not have a standard place for installation. At the same time, the main defensive weapons of the crew were pistols and submachine guns MP-40. The crew of the self-propelled gun consisted of five people, four of whom, together with the commander of the car, were located in the open wheelhouse. 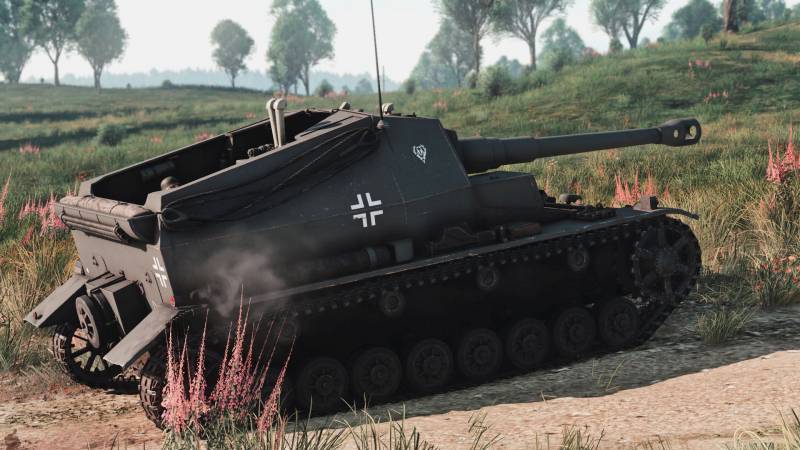 Self-propelled gun mounted transmission VK 9.02, working in conjunction with the Maybach HL-66P engine. The engine and transmission were located in the front of the case. The Maybach HL-6P 66-cylinder gasoline engine with water cooling system developed a maximum power of 180 hp. For a machine with a combat weight of more than 22 tons, this was not enough, the specific power was a little more than 8 hp. per ton. The maximum speed on the highway did not exceed 27 km / h, on rough terrain - about 10 km / h. Cruising range - 170 km. In the future, it was planned to install a more powerful Maybach HL-12 120-cylinder engine (300 hp) on production models, but these plans were not destined to come true.

Combat use and the fate of prototypes

Dicker Max took part in repelling the failed counterattack of the 14th Mechanized Corps. At the same time, the power of their artillery weapons was excessive for fighting light Soviet tanks, so their main goal these days was the artillery positions of the Soviet troops. Their next major battle, 10.5cm K18 auf Panzer Selbsfahrlafette IVa, was held on June 30 near the Berezina River, firing off Soviet armored train with artillery fire, which, however, could not be destroyed. During the battle, one of the installations failed. A little later, a fire broke out in one of the self-propelled guns on the way to Slutsk, the crew managed to evacuate from the car, but the tank destroyer was lost forever after the detonation of the ammunition. 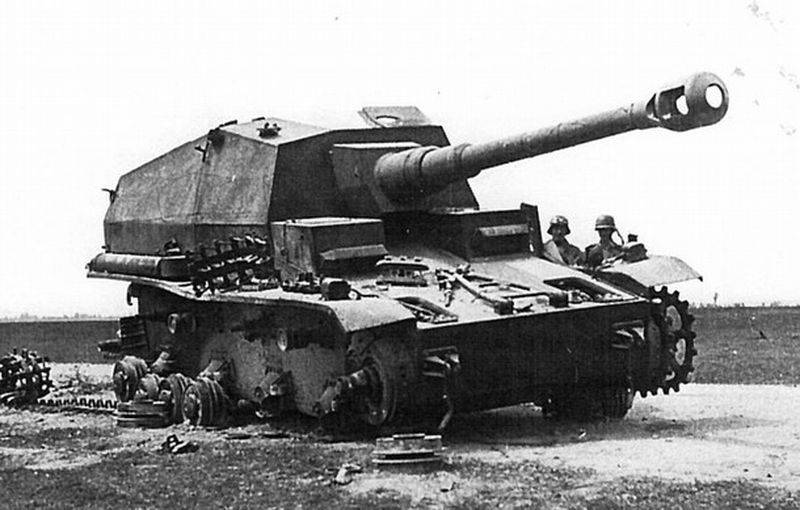 The remaining self-propelled guns conquered on the Eastern Front until the fall of 1941, until in October, after exhaustion of motor resources, was returned to Germany for overhaul and modernization. Returning to the 521st separate battalion of tank destroyers in the summer of 1942, the self-propelled gun took part in the German offensive on Stalingrad, in the battles near the city in the autumn and winter of 1942 the car was lost.

Despite the initial plans to release up to 100 such combat vehicles, the Germans limited themselves to building only two prototypes. Despite the excellent firepower and ability to combat both fortifications and heavy enemy tanks, the machine was notable for its low reliability, low mobility and a very problematic undercarriage. Moreover, the experience gained was most likely generalized and later helped the Germans develop the Nashorn tank destroyer, which, like the Hummel self-propelled howitzer, was based on the successful unified Geschützwagen III / IV chassis built using the chassis elements of medium tanks Pz III and Pz IV.

We are in Yandex Zen
Self-propelled gun mount 15 cm sIG 33 Sfl. auf Pz.Kpfw.I Ausf.B / Sturmpanzer I (Germany)
Iron fist of the Red Army. Motorized and tank divisions
45 comments
Information
Dear reader, to leave comments on the publication, you must to register.