Will a new Russian-Turkish party begin and who will win the victory? 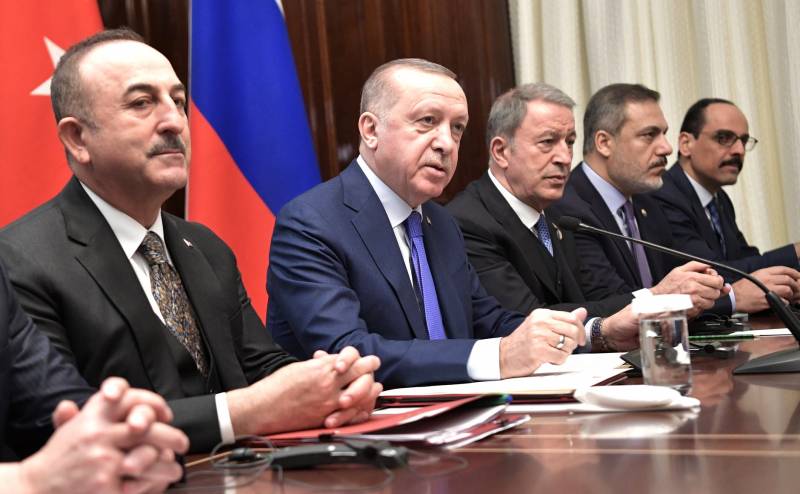 Watching what is happening in Syria today, especially three downed Syrian aircraft, you experience more than twofold feelings. On the one hand, it’s like President Putin twice already, and Defense Minister Shoigu was buried by ISIS six times (still banned in Russia, however). Who, then, is so successfully capturing the city from the Syrian army?


Apparently, a certain ISIS-2. Which in the Russian Federation has not yet been banned, not destroyed by our bombs and missiles, but it is still ahead.

But then the next round began, and other regional powers began to be drawn into the conflict. Following some of the world.

The most interesting thing is that each of the participants in the Syrian events has their own goals. Moreover, these goals are so different that the conflict between some countries seems quite real.

Especially now, when almost five years have passed since Russia entered this war.

But since the headline talked about relations in the region of Russia and Turkey, we will dwell on how interesting these relations were. If you can call them that.

November 24, 2015. We remember the incident when a Russian Su-16 bomber shot down a Turkish air force F-24 in the sky over the Turkish-Syrian border. What is interesting is not so much a demonstration of power by Turkey, but the reaction of Russia.

The press expectedly raised a howl, the public was indignant, all top-level leaders spoke on the topic, as a result, Moscow imposed economic sanctions on Turkey. Tomatoes, resorts ...

However, everything passes, all this has passed. And very fast. Turkey was forgiven, and began to cooperate with her again. Well, I really wanted Turkish money in the Kremlin. Therefore, the “Turkish Stream” was very quickly completed, which gave a good income to those who need it. And all sanctions were lifted without exception. In return for some not very intelligible apologies from Erdogan.

The second episode, which is a vivid illustration of relations between Russia and Turkey and Putin and Erdogan, was the purchase by Turkey of Russian anti-aircraft systems S-400.

I emphasize that Russia did not sell, but Turkey bought. The initiative came from the Turkish side, but the Russian sold, despite the fact that the buyer was the country of NATO, which has a second army in the bloc. Indeed, to whom is war, to whom is mother dear ...

It seemed that Putin and Erdogan seem to have agreed on who and what will do in Syria. In the language of diplomacy this is called the “division of spheres of influence”. The only problem is that each of the leaders of the two countries very differently understood how to arrange their actions in Syria.

What really happened on the sidelines of the few, but fruitful meetings of the leaders of Russia and Turkey, we, of course, will never know.

However, it is quite possible to imagine, especially starting from what Erdogan is doing today.

And the Turkish president continues to demonstrate independence. His program is quite simple and can be traced without problems.

Erdogan at one time did not add to the assassination of Assad. Either using this as an argument in negotiations with Putin, or relying on ISIS militants. But he could ... And then the "ally" of Russia in the region would become the property stories. Like Saddam Hussein, for example.

But, without overthrowing Assad, Erdogan was able to really bargain with Putin. And the Turkish leader wanted no less, but to create a “gray” buffer zone in northern Syria. The width of the zone is 30 km, the length is “only” 800. Almost the entire length of the Syrian-Turkish border.

Guess there is oil there?

In addition, Erdogan seriously hoped to return “to his historical homeland” about four million Syrian refugees living at the expense of Turkey in Syrian-controlled territory.

And Idlib. Idlib is not just a point on the map. This is actually a reservation, sort of like a de-escalation zone, into which Assad’s opponents from different groups, but mainly those supported by Turkey, have moved. The reservation was arranged at the initiative of Russia, sort of so as not to spill excess blood.

However, this scenario "worked" approximately like the Minsk agreements, that is, it did not work at all. The ceasefire was constantly violated, with both sides fiercely accusing each other. Well, just like Ukraine and the republics of Donbass. It is equally violent and just as ineffective.

Well, in the end, in January of this year, what began was long overdue. That is, the parties just clung to each other's throats.

Assad’s troops began to strike not only at the units of the Syrian opposition, which were Turkish-oriented and supported by Turkey, but also at the Turkish military, which were stationed in the sector.

It is clear that the Turks responded to each such strike with a much more powerful strike against the Syrian government forces.

February 27. The most massive strike by the Syrian army directly on Turkish troops. He followed after another demand personally from Erdogan of the Syrian army to get out of the demarcation line.

The Syrians delivered a very tangible blow to the Turks. It is noteworthy that at the same time, Russia sent two frigates (Admiral Makarov and Admiral Grigorovich) with Caliber cruise missiles on board, as well as the Orsk BDK to the Syrian coast.

Turkey said it was ready to block the Black Sea straits, but eventually missed these ships.

However, over the past two days, the Turks, without straining at all, shot down three Syrian aircraft. Yes, frank air junk Su-24, but shot down.

What is starting now can be called another "strange war." But this war is reaching a new level. This is not about the fact that statements and claims are exchanged by militant groups controlled by different sides of the conflict, but by the countries themselves that control the region.

The countries that control the region are Russia and Turkey. Syria in the person of Assad is no longer even trying to demonstrate independence. At least, all the claims of Turkey towards Syria are answered from Russia.

Is this good or bad?

My opinion is more competent. And does not cause illusions.

On February 28, the Turkish side accuses everyone in a row (or rather, accuses the Syrians, referring to ours) of allegedly "Syrian" aircraft attacking a convoy with the Turkish military.

The representative of the Russian center for reconciliation of the parties to the Syrian conflict replies that the blow to the column was delivered not by the "Syrian" but by the Syrian aviation. And in this convoy of Turkish military there shouldn’t have been a single one, and if there were, then the Turks themselves were to blame for not informing them of the presence of their military in the convoy.

In response, Turkish Minister of Defense Hulusi Akara practically accused the Russian representatives of lying. He said that the Turkish department warned the Russian military about the places of deployment of its soldiers, and the “Syrian” aviation hit those very places, including the military ambulances.

Vicious circle. "Syrian", that is, Russian, the aircraft did not bomb, it worked simply Syrian. Who is to blame and who is right, you can figure it out for a long time.

But here it is necessary to look not at the raging politicians and military, but at the first persons.

If you rewind the tape of events, you can see that earlier, after the next / next meeting / telephone conversation between Erdogan and Putin, at least some shifts were observed towards the constructive side, but today it doesn’t even smell.

Today, all the conversations between the first persons serve solely for some kind of cover and propaganda of intentions. That is, to expose oneself “white and fluffy” and denigrate a neighbor.

Everything is very logical. In Idlib, too, it all began. Everyone just climbed out of their skin in order to demonstrate their desire for peace. And according to the very same training manual in the Donbass, everyone is so for the world that there will soon be no one to fight for it.

Who wrote these scripts ...

But in fact, in the next telephone conversation between Putin and Erdogan (according to the press service of the AP), on-duty words were said about concern about the situation in the region.

- Recep, the escalation in Idlib is sad. It is annoying.

- Vladimir, I completely agree with this point of view.

Well, in the end, the Turkish army smashed the Syrian wholeheartedly, staging the most massive shelling in the history of its illegal stay on Syrian soil.

An interesting way to relieve tension.

More and more various experts are beginning to consider the issue of a direct clash between Turkey and Russia. While theoretically, reasoning, looking at the ceiling. Of course. It would be interesting to arrange this.

Putin reacted by telling us that we do not want to fight with anyone in an interview with TASS.

"We are not going to fight with anyone, but we are creating a situation in the defense field so that it would never occur to anyone to fight with us."

But this is not about defense. It's about Syria ...

It is clear that the "close" media have already thrown a luxurious tantrum, telling their readers how invincible we are, and therefore we simply won’t fight with anyone.

And it’s just wonderful that we won’t. For if you do not fight, then you will not lose.

And by closing the airspace over Turkey and securing the support of Azerbaijan (which in fact is Turkey’s ally partner), one can significantly complicate the life of the Russian contingent.

In general, the script is not drawn the most pleasant, and it is worth discussing separately. There may be as many development options as you like.

The most unpleasant thing in the situation is that Erdogan begins to play from a position of strength and just take what he wants. The claims of the Turkish leader for supremacy in the region and the shah’s throne are no secret to anyone.

As well as the fact that Erdogan is an ally only to Erdogan. Everything else is a fairy tale for believers.

It is very difficult to say how far the sides can go, but the fact that this time the Russo-Turkish confrontation is played on the side of Erdogan and with his advantage is, unfortunately, the bitter truth.

And yes, waving ICBMs and all kinds of Poseidons there will hardly help. Here, as in a card game, you can’t sort it out. Peeling will be the whole community.

Complex alignment, difficult choice. We can only predict and see how our leader will be able to play this difficult game.