The legacy of the NGP program: rooted and forgotten ideas 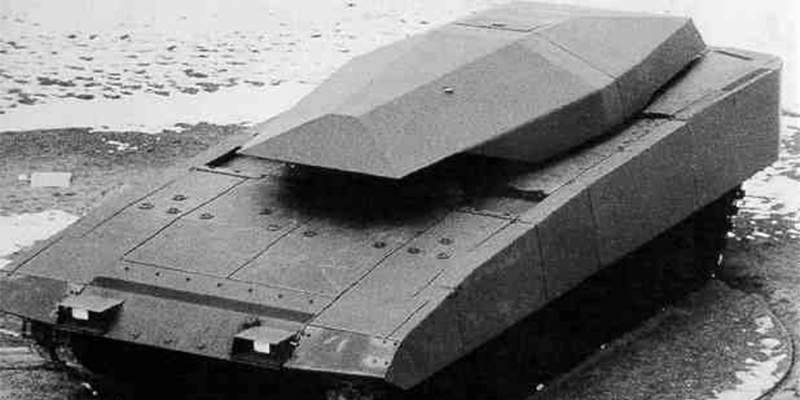 In the early nineties, Germany launched the Neue Gepanzerte Plattform or NGP ("New Armored Platform") project. His goal was to create a whole family of promising armored fighting vehicles of different classes for the future rearmament of the ground forces. For a number of reasons, the development of NGP was stopped long before the desired results were obtained. But some developments of this program subsequently found application in new projects.

The goal of the NGP program was to create new BBMs that could replace all available Bundeswehr samples. According to the established schedule of work, until 1996 the army was to determine the tactical and technical requirements for the family, and until 2005 it was planned to carry out experimental design work. In 2005-2009 were going to put into service an armored personnel carrier based on NGP, in 2015 the main tank was expected, and from 2020 - all other samples.

The project involved the creation of three unified platforms for various purposes. Plattform A was considered as an MBT, Plattform B was the basis for an APC or BMP, and on Plattform C it was proposed to build various self-propelled guns and auxiliary equipment. The three platforms were to be based on common solutions. 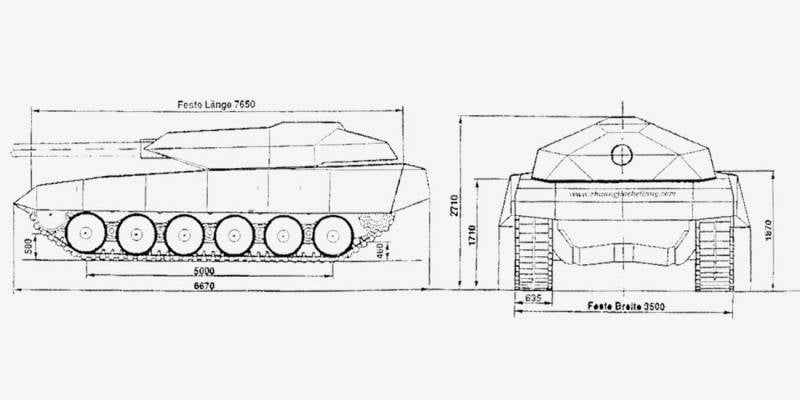 Possible appearance tank NGP
However, most of these plans have not been implemented. In 1998, the NGP project was reduced to Neuer Schützenpanzer or NeSPz ("New BTR"), and in 2001 it was finally closed. By this time, it was only possible to develop and test a car demonstrator of EGS technologies. In the future, new projects started, which significantly differed from the large and comprehensive NGP program.

The exact requirements for NGP platforms in terms of protection have not yet been published. At the same time, technical proposals of developers and some solutions to increase the level of protection are known. Some of them “survived” the NGP program and are used in new developments.

Wegmann, in its preliminary design of the NGP platform, was able to provide frontal projection protection equivalent to 1000–1300 mm of homogeneous armor. Such characteristics were achieved through the use of combined and spaced armor with rational tilt angles. It was assumed that MBT and infantry fighting vehicles of new types will have the same anti-shell protection.

Since 1995, several participants in NGP have studied the creation of active protection and optoelectronic suppression systems. Soon the concept of ASEP COEP (Abstandswirksames Softkill-Schutzsystem) appeared, on the basis of which the MUSS (Multifunktionales Selbstschutz-System) product was then created. For obvious reasons, this complex did not get on NGP armored vehicles, but still found application. Tests of such KOEP were conducted on German MBT Leopard 2 and British Challenger 2. In 2006, MUSS were adopted as part of the equipment of the BMP Puma for the Bundeswehr. 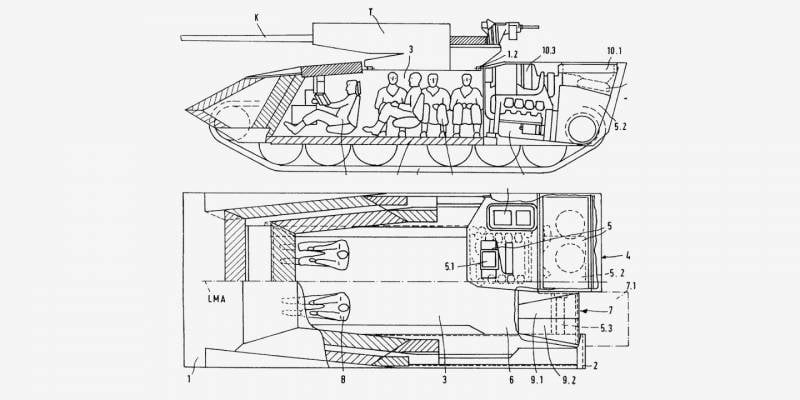 BMP variant on the NGP platform
KAZ was also developed for NGP. In the late nineties, the AWiSS complex was brought to the test. They did not manage to bring it to the close of the program, but the main developments then found application in new projects. However, KAZ is still not used on German own tanks.

The project of the main tank Plattform A or NGP-KPz provided for increasing firepower due to a fundamentally new gun. Several companies from Germany and other countries developed the 140 mm Neue Panzerkanone 140 smoothbore gun (NPzK-140). Due to the increase in caliber and the introduction of a new shot, the muzzle energy could be increased to 20 MJ with an increase in combat characteristics.

The 140-mm gun did not advance beyond the OCD. Due to the closure of the NGP program, such a gun was left without a possible carrier, and the work actually stopped. After many years, the experience of the NPzK-140 project was used to create the experimental 130-mm gun from Rheinmetall. This product was first shown in 2016, but its prospects are still in question. The possibility of using such weapons in the German-French MGCS project is being considered.

Calculations showed that a highly efficient shot for a 140 mm caliber gun would be too large and heavy. To work with him, an automatic loader was developed. Several NGP participants have proposed their own AZ options, containing up to 30 shells. The developments on the topic of AZ were not implemented and implemented. In the future, such solutions may find application in the MGCS project. 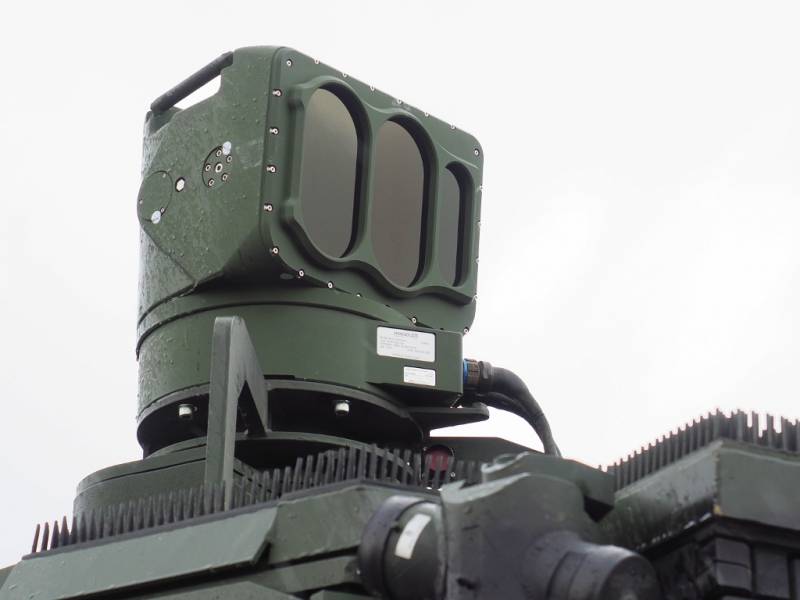 One of the MUSS KOEP units on the Puma infantry fighting vehicle. Wikimedia Commons Photos
The Plattform B project (NGP-SPz) explored the possibility of using an uninhabited turret with machine-gun and cannon and grenade launcher weapons, remotely controlled. From the point of view of further implementation of developments, such solutions were almost the most successful in the entire NGP program. To date, German enterprises have developed and are offering on the market a range of remotely controlled combat modules.

All samples of the NGP family were planned to be built on a tracked chassis. Three platforms for different purposes should have a maximum degree of unification, able to simplify the development, production and operation. At the same time, at the stage of competitive development, various architecture and equipment options were used.

Wegmann offered a versatile chassis with the possibility of building a tank or armored personnel carrier. The engine was placed in the stern with a shift to the right - to the left of it there was space for the AZ or landing assault. The project from Maschinenbau Kiel, in turn, provided for a front-engine layout with the release of the center and the stern for combat equipment or an airborne squad. 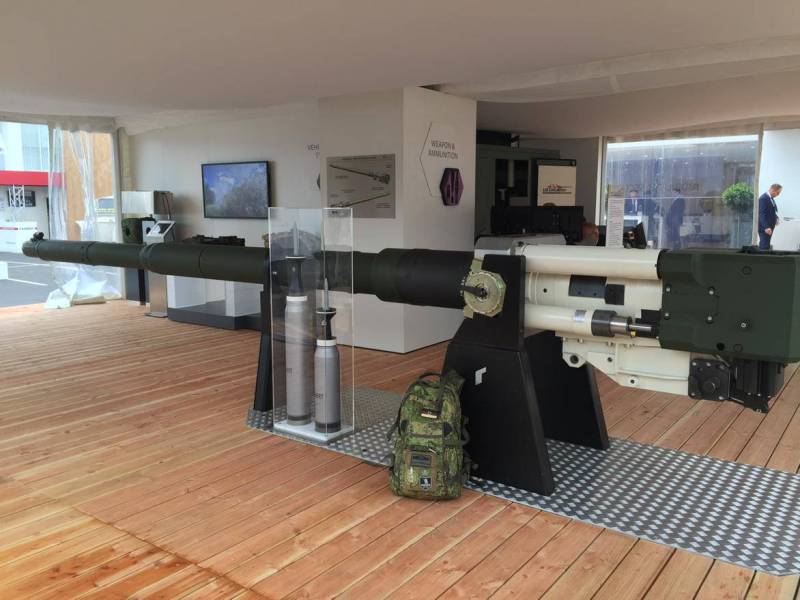 The layout of the modern 130-mm tank gun from Rheinmetall. Photo Bmpd.livejournal.com
Both approaches were subsequently used repeatedly in new projects. Moreover, the choice of BBM architecture was carried out in accordance with the class of technology. It is likely that this state of affairs will continue in the future, when creating new models. For example, in the context of the MGCS project, both front and rear engine placement are now considered.

In accordance with the requirements for NGP, the crew of promising BBM was to consist of only 2 people. The NGP-SPz vehicle also had to carry 6-8 paratroopers. Fulfillment of such requirements, primarily in terms of crew size, led to new challenges.

A crew of 2 should include a driver and a commander, who also serves as the systems operator and gunner. The load on the commander is increasing, which can reduce the combat effectiveness of the armored infantry fighting vehicle. To solve this problem, various automation tools are required, taking on part of the tasks of the commander.

Work on automation tools continued until the close of the NGP program and yielded some results. Subsequently, the development of this direction continued. In recent years, various BBM options with a reduced crew and advanced electronics have been offered again. However, so far, even on the newest models of German armored vehicles, the crew managed to be reduced to only three people: both the commander and the gunner-operator are still present in it.

The NGP program in its original form was developed until 1998, after which it was transformed with a change in tactical and technical requirements. In 2001, the second version of the program was closed for a number of reasons. The fate of the program was affected by the overall complexity, cost, non-compliance with new requirements and other factors. 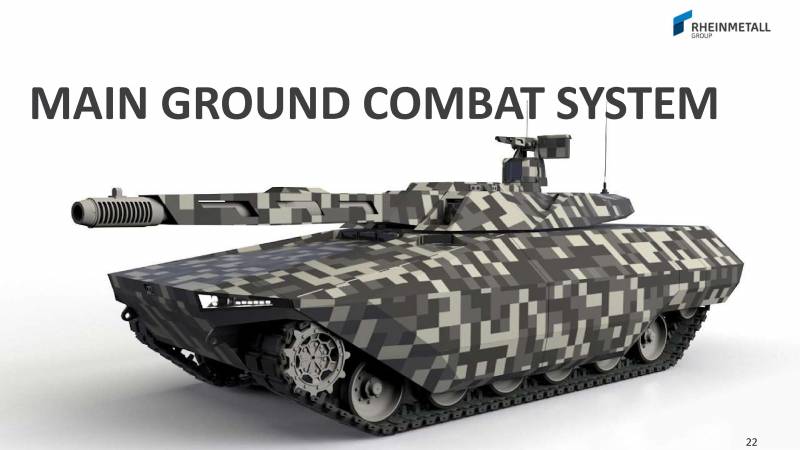 Rheinmetall MBC MBT Option
The NGP technique had special requirements, the implementation of which was associated with notable difficulties. They needed a search for solutions, development of technologies, etc. which took time and money. Already in 1998, the Bundeswehr concluded that it was impossible to continue work on three platforms simultaneously with the letters "A", "B" and "C". For this reason, the NGP program was reduced by three times - before the development of the NeSPz armored personnel carrier.

The end of the NeSPz project is formally associated with the new NATO requirements that came out in 2001. They preferred airborne vehicles, and NGP and NeSPz fit into such requirements with great difficulty. However, this was not the only reason for rejecting the project. BTR needed further expensive development, which would take a lot of time, and its successful completion was not guaranteed.

Considering the course and results of the NGP program, it is easy to notice that its participants proposed, studied and, in some cases, implemented many interesting new solutions aimed at improving the performance of the equipment. Some of these ideas turned out to be useful and found application in new projects. Others turned out to be excessively complex or unsuitable for practical use. Thus, the NGP program yielded certain positive results - albeit indirectly. It is very likely that her legacy will again prove itself in the projects of the future.

We are in Yandex Zen
Tank restructuring
New armored platform NGP (Neue Gepanzerte Plattformen), which is not built
9 comments
Information
Dear reader, to leave comments on the publication, you must to register.