Oddities of the US presidential race: Democratic candidates are removed from the election one by one 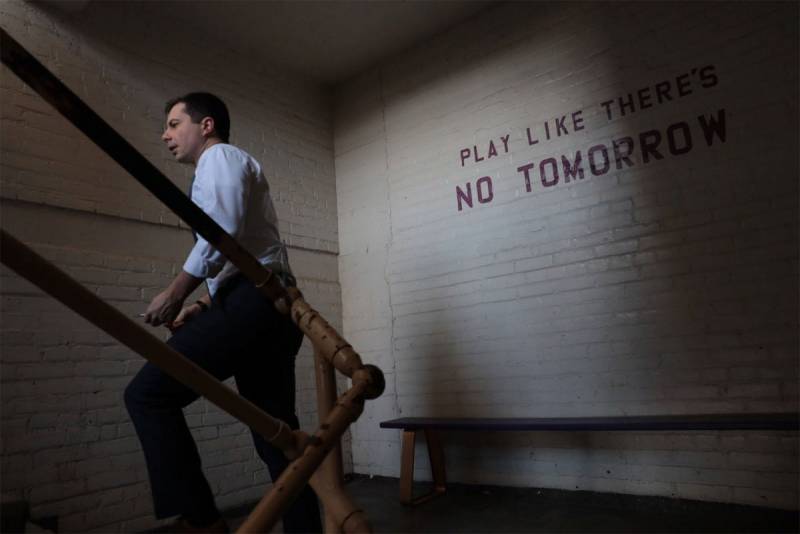 The American media called the sensation and strangeness the way out of the election race of the youngest candidate from the Democratic Party for the presidency of the United States - Pete Buttigic.

Pete Buttigic, the former mayor of the small town of South Bend in Indiana, began his election campaign quite briskly. The son of Maltese immigrants with local political experience was able to raise more than $ 80 million for his campaign and quickly spin up.

In addition to the 38-year-old politics, his youth, service in naval intelligence, participation in the war in Afghanistan, external attractiveness, sociability, and the ability to interest listeners in the discussion were considered.

With the help of these qualities, Buttigic gained fame. He even began to be called the most promising candidate from the Democrats.

As a result, in the beginning of February, at the very first preliminary intra-party elections (focuses in Iowa), Buttigic won the round, albeit by a small margin from Bernie Sanders. To the applause of this success, the voters carefully looked at the young candidate and recoiled. “Pete, is it true that he is openly gay?”, - the disappointed people asked reporters right under the television camera.

This nuance from the personal life of Buttigic was in the shadow of the election campaign. Then he went into many conservative media stories explaining that Pete Buttigic had married his partner back in June 2018.

Apparently, tolerant America was not ready for the president of this orientation. Buttidzic’s popularity began to decline, already at the third local party election held last Sunday in South Carolina, he sharply lost and withdrew from the election campaign.

I wonder how Buttigic explained his decision. Addressing his supporters in his native South Bend, the ex-candidate said that for the sake of the values ​​that he promoted during the campaign, "at this stage of the race" it is better to "step aside" to unite the party and the nation.

Democrats team up against Bernie Sanders

Buttijic said about the party’s unification not for the red words. Exactly this motive was used by Julian Castro, the former Minister of Housing under President Barack Obama, billionaire Tom Steyer and other candidates in his explanation of leaving the election campaign. It so happened that by the fourth round of the primaries more than a dozen candidates from the Democratic Party had left the presidential race.

In expert circles, they started talking about the fact that someone’s strong hand removes unpromising candidates from the race so that the votes do not stretch. By the way, after three primaries, Buttidzhich enlisted the support of 25 delegates from the party congress, who will approve the Democrats for the presidency of the United States.

This is the second result after Bernie Sanders with his 45 deputies. Next on the list are former US Vice President Joseph Biden - 15 deputies, Massachusetts Senator Elizabeth Warren - eight, Minnesota Senator Amy Klobushar - seven deputies.

As you can see, Buttigic was not an outsider at all. Under favorable circumstances, he could still launch a campaign in his favor, so as not to win the election, but to create a reserve for the future and gain a foothold in the political establishment of America.

However, the leaders of the Democrats, apparently, considered Buttidzhich an “impassable candidate” and asked to leave, so as not to interfere with restraining Senator Bernie Sanders. Sanders has a bad reputation in the party since the last election. It is believed that he prevented Hillary Clinton from defeating Donald Trump.

But not only the events of four years ago explain the negative attitude of the leaders of the Democratic Party towards the elderly senator. Bernie Sanders is a radical left-wing populist who presses in his rhetoric the word "socialism" that is abusive in America. The senator, not bothering with the financial support of his initiatives, aroused the genuine interest of the poor part of the American population with his proposals to introduce free health care and university education, write off all student loans, and switch to wide social reforms.

These innovations threaten the democratic party, which has defended the interests of the US financial oligarchy for many years, the loss of political guidelines and an internal crisis. However, Wall Street is unlikely to allow such a person in the White House. Therefore, he will do everything to hinder the nomination of Bernie Sanders as a candidate for the presidential election.

A possible scenario is already being discussed in the American media. The congress is optimal for the leaders of the Democratic Party, at which none of the candidates will receive a clear majority of the deputies. Then the vote will be dictated by the party functionaries. It will be in several rounds, with a detailed discussion of personalities, in which, of course, the thesis about Bernie Sanders' “indiscriminability” will emerge.

Under this scenario, according to experts, the election platform of the Democrats is now being cleared. Will the effect of these intrigues be obvious only at the pre-election congress of the US Democratic Party. Another oddity comes out - the one who "cannot be trusted with the presidency" can go to the polls from the Democrats. Surprisingly, the same thing was said about Trump.

We are in Yandex Zen
Overseas ally? Donald Trump - US Presidential Candidate
South African Special Forces
38 comments
Information
Dear reader, to leave comments on the publication, you must to register.