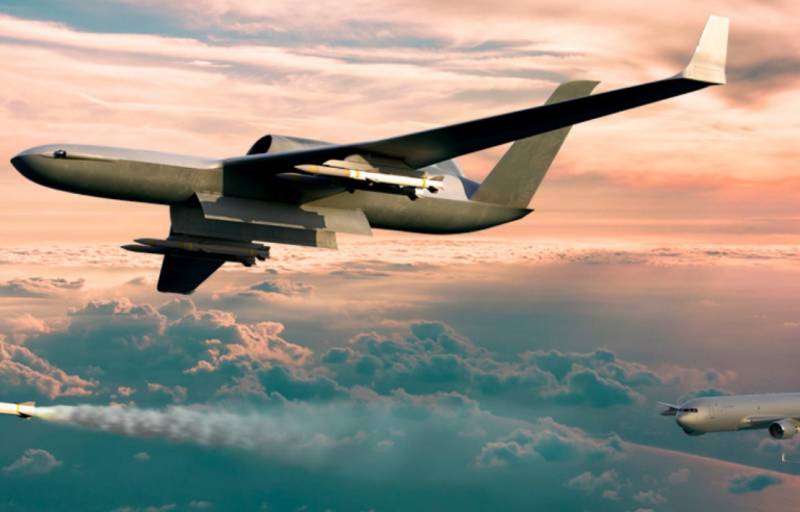 The United States showed the concept of a new unmanned aerial vehicle. The machine will be capable of aerial combat and refueling in the air, which will lead to large-scale changes for the US Air Force.


A new UAV called Defender was developed by General Atomics. The drone's tasks include, first of all, protecting control aircraft, reconnaissance aircraft, and refueling aircraft from attack by enemy aircraft. Interestingly, the drone concept was introduced almost immediately after the United States became aware of the cessation of procurement of MQ-9 Reapers.

The new drone will add an internal compartment for weapons, the front fuselage will be more streamlined, and the wing design will have less bending than its predecessors. Most likely, a Defender UAV will have an AESA radar, a radar receiver and a missile and approach warning system, radar / electronic support measures, as well as an infrared search and tracking system IRST.

Thus, the UAV will have four levels of data collection about the target and the situation, which will more effectively counter potential threats and form a flight strategy, avoiding these threats. It is also possible that UAVs will try to arm with a laser system that allows them to shoot down enemy missiles, reflecting the danger from escorted support aircraft.

The US military command rightly considers the Air Force support planes (tanker planes, control planes, etc.) to be the most vulnerable during armed conflicts, since they are not highly maneuverable, poorly protected and fly much lower than fighters. In turn, covering the support planes with fighters is quite difficult, and drones will help to solve the main tasks to ensure their safety.

An unmanned aerial vehicle with high endurance, capable of refueling in the air and developing a speed that allows keeping up with air tankers, control and reconnaissance aircraft, and even bombers, would significantly increase their security. For example, combat control personnel on one of the support aircraft could direct unmanned aerial vehicles through a semi-autonomous command interface to neutralize air threats from the enemy.

Defender itself could operate in the air without relying solely on satellite data lines outside the line of sight. The device could be controlled by one of the satellite channels of a tanker or another support aircraft. Accordingly, the use of new UAVs would improve the communications architecture used in the US Air Force.

The undoubted advantage of the device, like any drone, is the absence of a person in the cockpit. This allows you to perform complex and risky operations support aircraft support. Unlike the personnel serving the UAV, the pilots of fighter aviation there is no way to relax, they can’t even get up and straighten in the cab. And this makes impossible the continued use of fighters in the air. Also, fighters require constant refueling.

Apparently, the novelty of the American military industry is designed to increase the security of US Air Force aircraft from Russian and Chinese military aircraft. And first of all, Americans are afraid of the Chinese J-20 fighters, which pose a significant threat to the aircraft providing the US Air Force.