July 25 2012
25
Last week, Deputy Prime Minister Dmitry Rogozin visited India. During this visit, a number of projects of promising cooperation in the military-industrial sphere and the field of joint space exploration were discussed. It is noteworthy that both the Russian and Indian authorities consider the agreements that were achieved during Rogozin’s visit to India, truly significant and aimed at long-term cooperation. 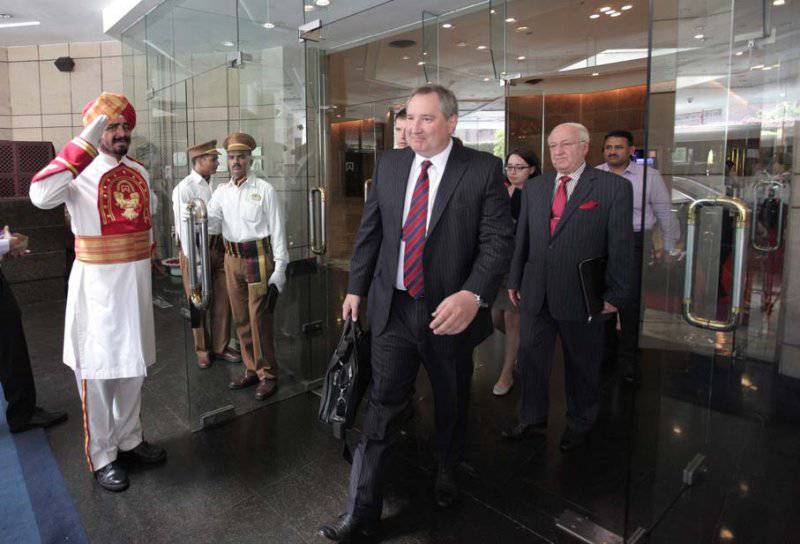 One of the proposals that the Deputy Chairman of the Russian government made in New Delhi was the proposal of the Indian side to work together on the global navigation system GLONASS. At the same time, Rogozin himself emphasizes that the proposals for GLONASS have the character of an equal partnership. In other words, the Indian business, together with the developments of Indian specialists, could take part in the formation of a project that is considered to be exclusively Russian. And this is, indeed, a very tempting offer, because, in fact, the Indian side is invited to become an accomplice in the implementation of an ambitious project, and not just take advantage of its final product, implemented only by Russian experts.

It is worth recalling here that before the arrival of Rogozin in India, there was an agreement between this country and the Russian Federation, signed in January 2007. Under this agreement, India was given the opportunity to use part of the radio frequency spectrum of GLONASS to solve its problems. Based on this agreement, it was decided to use the Russian global positioning system in Indian transport. The Russian company NIS GLONASS for this purpose registered a subsidiary of NIS GLONASS Pvt Ltd. in the Indian city of Mumbai. It happened at the end of the past - the beginning of the current year. It would seem that the revenues from the project implementation could already have been recalculated in the Russian budget, but everything turned out to be completely not so cloudless. On the horizon, competitors immediately appeared in the face of British, Singaporean and Italian companies, which set out to make their proposals to the Indian side, which put a tangible barrier to the Russian project. As a result, the victory in the tender, in which the Russian company participated, could be far from being in Russian hands.

Apparently, in order to tip the scales completely and irrevocably towards Russia, Dmitry Rogozin decided to make an offer to the Indian side, which is really difficult to refuse. It is unlikely that Indians should expect from the British or Singaporeans that they will offer New Delhi to participate in their projects on an equal footing, and not just be content with the finished product produced abroad. Russia, on the other hand, has taken this step, and therefore it remains to wait for the decision of the Indian leadership and business.

However, the GLONASS theme in the meetings between Dmitry Rogozin and the Indian leadership was far from the only one. The materials published by the Indian side report on agreements on the modernization of the Russian military equipment by India, purchased earlier, as well as on Russia's participation in Indian projects on mutually beneficial terms. More precisely, many of, let's say, the old arrangements, have found their new form after a number of rough edges that have arisen between the two parties.

In particular, Dmitry Rogozin discussed in New Delhi the prospect of Russian participation in the construction of seven frigates belonging to the 17A project (frigates built using stealth technology using Indian techniques), as well as the 4-13 destroyers of the 15B project. So far, it has not been reported how Russian companies can conduct integrated work with the Indian Mazagon dox on the construction of destroyers. And to begin such work, the Russian side will have to use all its trumps, which, hopefully, are available.

In addition, Dmitry Rogozin's visit to India, one way or another, influenced several Russian-Indian projects. These are those projects whose implementation by certain circumstances was frozen by the Indian side. We are talking about the modernization of the Tu-142МE. This is a modification of the long-range antisubmarine aircraft Tu-142 for the tropical climate of India. The essence of the modernization lies in the proposal of Russia to equip these winged cars with a new search and targeting system developed by Russian specialists. The Indian side as a whole is not against such modernization, but nevertheless the priority is to equip the Tu-142МE with supersonic 3М-54E missiles capable of hitting surface targets from a small rocket ship to a cruiser with high efficiency.

Very interesting is the information that during the meeting between Dmitry Rogozin and the Indian head of the defense department, the use of BrahMos joint Russian-Indian production of BrahMos was discussed not only by Indian, but also by Russian troops. If this kind of Indian Minister Anthony’s proposal was really accepted by Rogozin, then the question is, where in Russia will BrahMos apply? On this occasion, experts have only one option: the use of missiles on frigates of the 11356 / 57 project. In 2014, the Russian fleet will receive three such frigates, which are currently being built at the Yantar enterprise. But at the same time, the question arises, why should Russia use BrahMos, if it already has its own Yakhont on 100%? Apparently, the answer to it lies solely on the basis of readiness to improve Russian-Indian relations, and since it is already a matter of partnership, then, as they say, the fruits of co-production and Russia, too, may have to be used.

In general, Rogozin’s trip to India showed that the two countries have enough projects that would allow not only to raise the cooperation of states to a new level in the military-technical sphere, but also to increase trade. Now the turnover for such large world economies, which are Russian and Indian, looks more than modest: no more than 10 billions of dollars a year. For comparison, the turnover of Russia and Germany reached the mark of 70 billion dollars. In other words, the Russian and Indian sides have every chance to develop their partnership, including through the implementation of the projects described here.

Ctrl Enter
Noticed a mistake Highlight text and press. Ctrl + Enter
We are
Russian weapons MADE IN INDIAChalta hi aviation is powerless
25 comments
Information
Dear reader, to leave comments on the publication, you must to register.