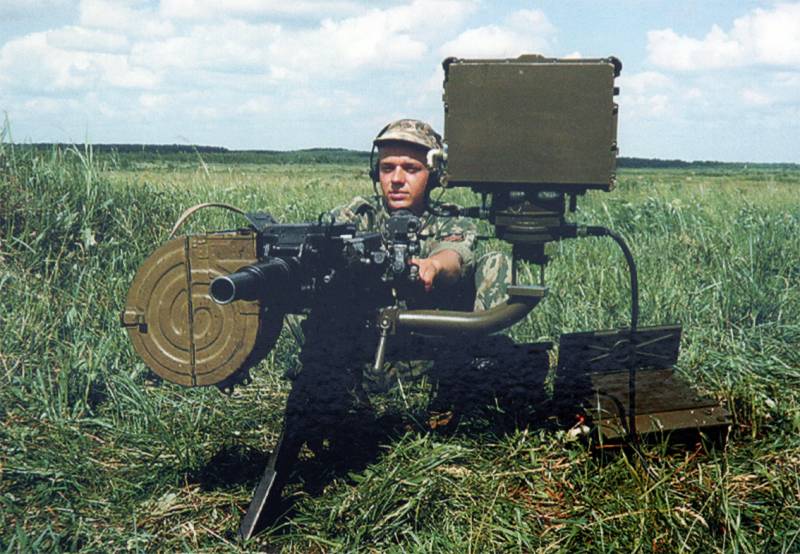 Radar "Fara-BP", installed on the AGS. Very dangerous adversary due to range and accuracy of detection

Radars gradually move from heaven to earth and become one of the success factors in ground battles. In recent years, quite a few samples of ground-based reconnaissance radars have appeared.

For example, Fara-VR can detect a tank at a distance of up to 10 km, an infantryman at a distance of up to 4 km, with an error of not more than 0,3 degrees in azimuth. It can be used to guide heavy machine guns or grenade launchers. There is also a unified radar "Credo-1E", capable of detecting a tank for 40 km, a person for 15 km, and simultaneously track 20 targets. True, unlike the Farah, weighing 12 kg, Credo-1E already requires a car for transportation due to the weight of 100 kg. Plus more aviation Various types of radars are often used for reconnaissance of ground targets and targets.

In light of this circumstance, the task of developing radar masking and protection arises. Unlike airplanes or ships, which can be specially designed taking into account the radar stealth, with ground-based equipment, this is much more difficult, and people almost do not lend themselves to such alteration. And what to do in this case?

One of the good solutions for radar camouflage of ground equipment and people can be a dipole reflector, familiar to everyone as a passive hindrance to suppress enemy radars.

In the same quality, it can be used on earth, only with some differences. If any ground-based object is highly radio-contrast and it is impossible to reduce its visibility, then you need to go the other way - add more false objects so that the real ones get lost between them. False objects should be reflected first on the radar, and reflectors are best suited for this. A dipole reflector, which is a strip of foil half the wavelength of the radar (for the above-mentioned radars operating in the range of 10-20 GHz with a wavelength of 1,5-3 cm, the length of the dipole reflector will range from 0,7 to 1,5 cm ), or a piece of metallized fiberglass, is perfect for creating numerous false targets and interference. It is cheap and technologically advanced in mass production, dipole reflectors can be made in a makeshift way from a suitable foil. A pack of such reflectors can be given to each soldier. 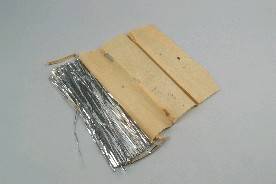 A simple thing is a dipole reflector, but how hard it is to find a good photo! Therefore, for now, we are satisfied with this low-quality one. The simplest dipole reflector is really strips of foil. These aircraft are long, against air defense radars, and against ground-based radars they will be very short, 1-1,5 cm

Tactically, the use of dipole reflectors comes down to two tricks. The first is to scribble them more generally and everywhere, on trees, stones, houses, on any objects, so that with any use of the radar it gets clogged with these false marks. This method is also suitable against aircraft radars, including AWACS. If a certain area in which the connection operates is covered with dipole reflectors, then this mess will not be easy to figure out. The second way is to create false objects that can be set and tidied up. For example, a panel, a sheet of cardboard or plywood with glued dipole reflectors. If we are talking about a panel for creating false targets, then it can also be factory production, when the fabric is stitched with metallic thread so that a dipole reflector for different wavelengths is obtained.

If the first method simply makes it difficult for the enemy to use radars, then the second method is aimed at deceiving him. As in any disguise, the use of such funds requires a carefully developed plan, taking into account all circumstances, otherwise it may turn out to be ineffective.

Another type of radar masking is the so-called “black dipole”, which is a strip or piece of fiber from a radar absorbing material, also at half the wavelength. In the formulation of radar interference, they were often used to enhance the protective effect of the bands and clouds of dipole reflectors. A very simple and cheap tool: hundreds of small pieces of graphite, carbon or other radar absorbing filaments. This material does not completely absorb radio emission and reflects part of it towards the radar, however the absorption is very noticeable and the reflection is very weak, so the “black dipole” creates a good screening effect.

A large number of carbon threads are now produced and sold.
Based on carbon fiber, radio-absorbing materials have been developed that can absorb radiation with a wavelength of 3 mm to 30 cm. It looks like a very fleecy carpet in which the fibers are of different lengths.

On the basis of the “black dipole” camouflage materials can be made. This can be, for example, a mask of non-woven fabric of camouflage color, into which pieces of carbon fiber of the required length are pressed in. 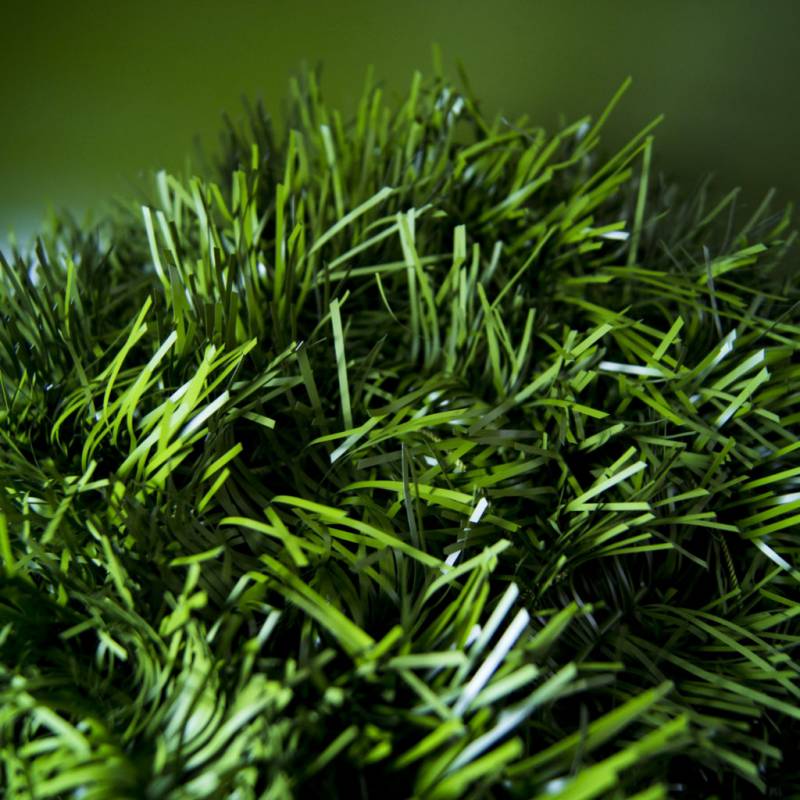 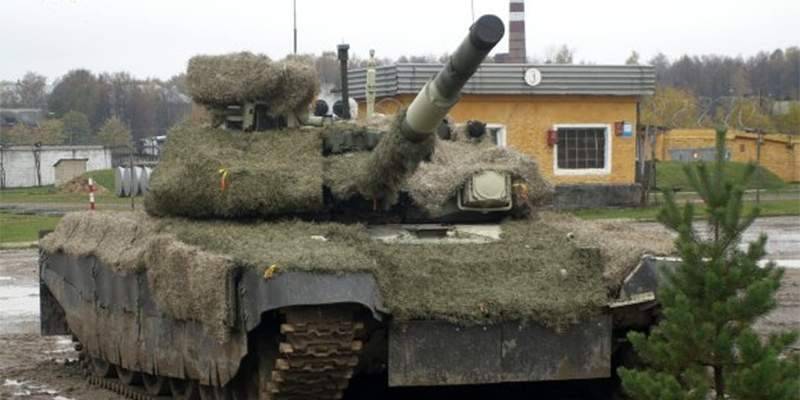 T-90 in radar absorbing protection. This is the same "Blackthorn". True, I think that such an approach as in the photo is completely unsuitable for combat conditions. Such protection will collect dust and dirt. The tank will quickly turn into a moving pile of dirt

It can also be made using artisanal methods by quilting the fabric with carbon fiber stitches of the required length.

Methods can be combined when the “black dipole” reduces the visibility of the real technique, and a conventional dipole creates false targets elsewhere. The use of these masking agents can vary with regard to conditions and conditions. For example, a real firing point is covered by an absorbing sheet, and around with the help of dipole reflectors several false targets have been created.

It is believed that on the basis of radar absorbing materials, such as carbon filaments and fleecy materials, a cloak can be made that will very effectively reduce the footprint of the infantryman in both the radar and thermal ranges. Carbon fiber has very little thermal conductivity and should well shield the thermal radiation of the human body.

The methods may not be ideally effective, but quite applicable, able to achieve the desired effect. The most important thing in them is that such camouflage means against radar reconnaissance can be made easily and simply using a variety of improvised materials (a roll of ordinary food-grade aluminum foil can be turned into “Tanks"," Guns "," aircraft "), and apply them in all units, up to a single soldier. If radars, especially compact ground-based radar stations, enter the battlefield, then everyone should have anti-radar camouflage. This should be prepared in advance.

We are in Yandex Zen
An-12 in Afghanistan
Universal anti-aircraft missile system C-300В
51 comment
Information
Dear reader, to leave comments on the publication, you must to register.