In Ukraine, will clean up the government "suck" 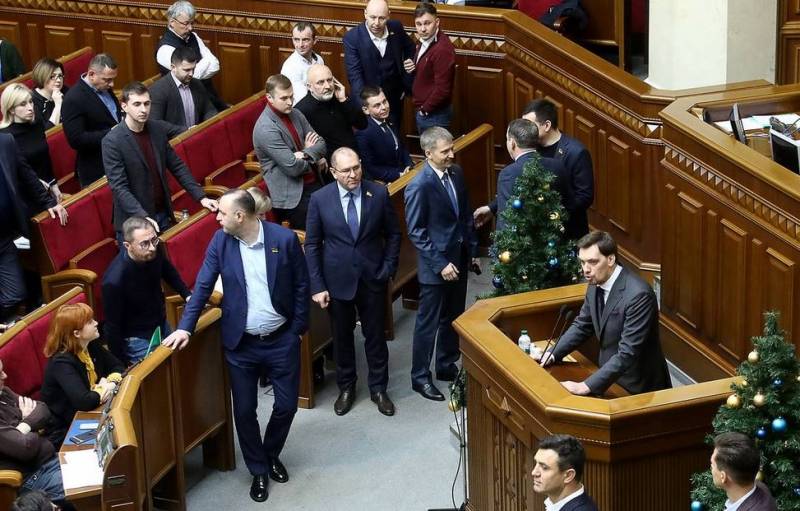 The question of the dismissal of an incompetent cabinet of ministers “sucking”, headed by Goncharuk, has ripened for a long time. They have not yet been touched, because they will have to take with them all the negativity that has accumulated to Zelensky’s team, and especially related to the possible decision to sell the land.


Decision time is coming. A real discussion has already begun of questions about who will become the prime minister and how the composition of the cabinet may change. Various candidatures are being discussed, including former Deputy Prime Minister Tigipko in the office of Azarov, who once headed Privatbank and was previously “offended” by Kuchma, who in 2004 proposed the candidacy for the presidency of Ukraine, not Tigipko, but Yanukovych. Zelensky confirmed that he met with Tigipko and they discussed the possibility of appointing him as prime minister.

Information was posted on the Internet with a list of the new cabinet, headed by Tigipko, who seemed to have soon rejected this proposal. Perhaps this is so, with his baggage and experience, a top-level politician participating in the mediocre Zelensky team can only bring him harm.

Regardless of who threw this list in, it’s interesting not even in names, but in trends, in what direction Zelensky and the puppeteers standing behind him are looking at, whom they are going to focus on.

Under Goncharuk, a team was formed exclusively of “suckers”, with the exception of Avakov, who inherited them from Poroshenko and was added by the Americans to the new team as a counterweight to Zelensky. "Piglets" in their worthlessness showed themselves in all their glory and, it seems, go under a full sweep.

Who are they planning to bet on in the new Cabinet?

For the persons included in the list, a clear strengthening of the Kolomoisky group and the return to power of Poroshenko's entourage. Of the four deputy prime ministers, two represent the Kolomoisky clan.

Avakov should not be represented, now he is not only the Minister of the Interior, but also the First Deputy Prime Minister with the authority to replace the Prime Minister. Igor Palitsa, a close associate of Kolomoisky, was appointed by him as deputy prime minister for infrastructure development, who had once been appointed to lead the Odessa region, who led the Ukrnafta controlled by Kolomoisky and promoted his Ukrop party project. Aleksandr Shlapak, representative of the Lviv diaspora in the Kiev government, former head of the Privatbank branch in Western Ukraine in the 90s and finance minister in the government of Yatsenyuk, is proposed as the Minister of Economics. The future Prime Minister Tigipko, who headed the Privatbank in the 90s, is no stranger to the Kolomoisky clan.

The presence of people from the team Poroshenko

The abundance of people from the Poroshenko team, who are about to return to power, is striking. The lonely personality as former Deputy Foreign Minister Lana Zerkal, a supporter of the immediate European integration of Ukraine, Russophobia, who sought through Russia to seek enormous financial compensation from Russia for the Crimea and the Donbass, is now being promoted to deputy prime minister for European and Euro-Atlantic integration.

Denis Shmygal, who pursued Poroshenko’s policy in the Lviv region and is close to the Akhmetov clan, is proposed as deputy prime minister for territorial development.

It is planned to return to power the odious and scandalous figure of Yatsenyuk and give him the post of head of the national bank. This could happen only at the insistence of the Americans, they are not going to quit "their own", despite the rejection of this person and at the highest levels of government. He became famous for his arrogance, scandalousness and rejection of any other opinion besides his own, when he was the chairman of the parliament, when deputies in 2008 scandal relieved him of his post and in 2016 Poroshenko hardly achieved his dismissal from the post of prime minister.

Lilia Grinevich from Poroshenko’s team is also being returned to power - to the post of Minister of Education and Science, apparently, to continue the unfinished business of the final destruction of education and turning children into morons. According to her educational reform in schools, subjects such as physics, geography, algebra, chemistry and others are now not studied separately. For example, physics, chemistry, biology, astronomy, and geography are combined into one subject, "Man and Nature."

For the post of Minister of Energy, it is planned to be well-known for all his combinations in the oil and gas market during the time of Poroshenko and writing himself millionth prizes Yuriy Vitrenko from the management of Neftegaz. Such “specialists” are very necessary for Ukraine for the final dragging of the energy sector of Ukraine into private hands.

Igor Umansky from the team of Yushchenko and Poroshenko is proposed for the post of Minister of Finance. Former Deputy Minister of Finance under Victor Penzenik and US citizen Natalya Yaresko, who successfully restructured Ukraine’s debt in favor of the Americans. He will replace Oksana Markarova from the “suckers”, who joined Zelensky’s team from Poroshenko and fell under the purge of Soros’s nominees.

The post of Minister of Social Protection is proposed by Galina Tretyakova, from the Poroshenko team, the head of the public council at the Pension Fund. An insurance specialist, known for her projects of removing state pension obligations, introducing a funded pension at the expense of pensioners and increasing the retirement age. Such social defenders of the low-income are very necessary for the Zelensky team to implement their libertarianism policy.

The post of Minister of Health is proposed by Maxim Stepanov, who has a diploma of a medical university and has not worked for a day as a doctor. He specialized in gas trading, tax collection, financial and legal activities; under Poroshenko he headed the Odessa Regional Administration, replacing Saakashvili. After the Minister of Health Suprun (Doctor Death), only such specialists are needed in this post.

It is proposed to nominate Ruslan Demchenko, a career diplomat, former deputy foreign minister, as well as assistant Poroshenko for the entire term of his presidency as minister of foreign affairs. What advice he gave to the guarantor was clearly seen from his activities in the international arena.

Another representative of the Lviv diaspora, Nikolai Solsky, is proposed to the post of Minister of Agriculture. Under his leadership, the land market will be launched for its successful transfer to the right hands.

The bet of American democrats and Zelensky on “sucking” completely failed, they were all new faces in Ukrainian politics, nurtured on Western grants and in their training centers, they were unable to even create the appearance of state activity, failed all directions of the Cabinet’s activity and are remembered only by scandals showing their professional incompetence and moral dishonesty.

Zelensky doesn’t have such a wide choice: Kolomoisky, the closest circle of farmers who are far from big-time politics, and Poroshenko’s “reserve”. He fundamentally refuses from the inheritance of the regionals and Medvedchuk or he is not allowed to lean on them from overseas curators. He had no and no other bench for politicians and administrators by definition.

Zelensky has to rely on Kolomoisky who gave birth to him and for all the complexity of the relationship, build his people into power, compensating for him removing Bogdan from managing the president’s office. Giving two of the four deputy prime minister posts to the people of Kolomoisky, he seriously strengthens his influence on decision-making in the executive branch, which is what a cynical oligarch who seeks to return lost assets needs.

Most likely, the Americans are helping Avakov’s help; he put them within their system of “checks and balances” as a counterweight to Zelensky, whom he should constantly frighten with the possibility of a coup and, on the other hand, prevent nationalists controlled by him from committing such actions. Avakov successfully fit into Zelensky’s team, although he is not there and is naturally afraid of him.

From this list, there is a clear tilt towards attracting Poroshenko’s entourage into the power structures. For all Zelensky’s hostility to the former president, he is forced to take them, because they possess at least some skills in public administration, without which Zelensky’s regime can no longer do.

Zelensky’s policy not only in essence, but also in form becomes a continuation of the country's governance system, which was built by the Americans under Poroshenko. Zelensky can work only within the framework of this system; he won’t do what he is told, he cannot resist this post.

The external American administration works quite efficiently, it lost the support of the population of Poroshenko, it was replaced with a new face - Zelensky, the “pigs” did not show themselves, they are looking for a replacement from the previous president’s waste material, today's president will not be happy - they will quickly find a replacement for him.

Zelensky has to turn around, follow instructions from curators and look for ways to keep his falling rating and power. He has no one to lean on, and he takes advantage of the fact that he is thrown to him. How successful the rotation of the Cabinet will be, time will tell, but according to the list of possible candidates, in principle, nothing good can come of it. Naturally, this list may still change more than once, but the trend and approach will continue, there are no other people in Ukraine.

We are in Yandex Zen
The tragedy of the American army ("The Atlantic", USA)
Situational analysis of the death of the MH17 flight (Malaysian Boeing 777), made on the basis of engineering analysis from 15.08.2014
40 comments
Information
Dear reader, to leave comments on the publication, you must to register.