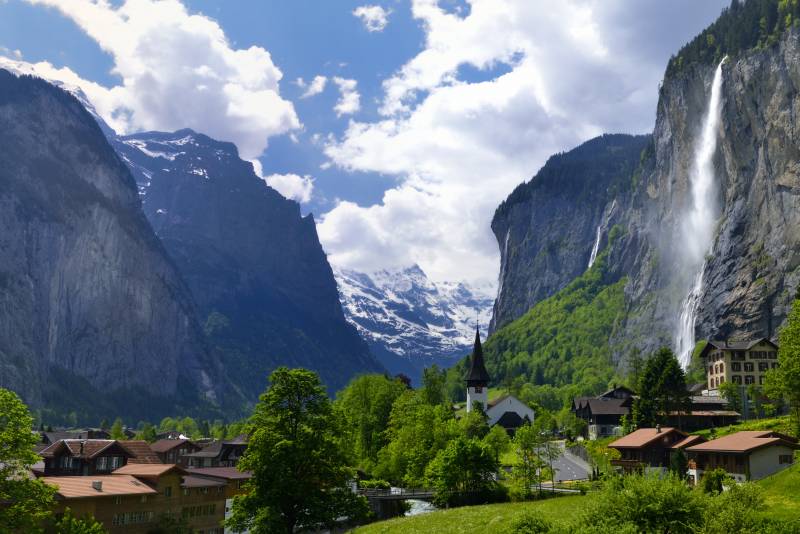 In Switzerland, which for centuries served as a symbol of eternal peace thanks to its own absolute neutrality, which remained inviolable during the most widespread armed conflicts, an “echo of war” unexpectedly awoke. The urgent need to eliminate the huge stockpile of ammunition from the Second World War today threatens the state with enormous costs, and the inhabitants of the village located next to it - parting with their homes for ten years.


The need to resolve the issue with three and a half thousand tons of ammunition stored in an underground military warehouse in the region of the village of Mitholz, canton Bern, was announced on February 1940 by the Swiss Federal Department of Defense, Protection of Population and Sports. The country will have to implement an unprecedented project in terms of complexity and cost, the implementation of which could cost the treasury more than a billion Swiss francs. Nevertheless, both official Bern and local authorities are determined to get rid of this colossal "time bomb" once and for all.

It should be noted that the background to this issue is more than serious and even tragic. In the winter of 1947, a powerful explosion suddenly occurred in the aforementioned warehouse, the cause of which, according to a later conclusion by experts, was the “chemically induced self-ignition” of the ammunition stored there. The explosion can be fully understood by the fact that the tremors caused by it were recorded even in Zurich, 115 km away. 9 people became victims of the tragedy, four of whom were children, at least hundreds of buildings in the district were completely destroyed.

After what happened, experts concluded that the repetition of such an incident is extremely unlikely, and if something happens, the consequences will in no way be equally catastrophic. However, repeated studies conducted in 2018 completely dispelled this optimism. Ammunition remaining in Mitholz can be torn apart at almost any moment, and it’s better not to think about where this will lead. To this day, next to the warehouse is located one of the typically Swiss pastoral villages, which is home to about 170 people (60 families). Most likely, they will have to leave their native places, and already now future internally displaced persons are being warned that the complete decontamination of the warehouse will be delayed, most likely, for a whole decade.

Generally speaking, the Swiss authorities, who are not at all planning to leave the villagers face to face with a potential disaster, act in full accordance with local specifics, which suggests anything but a rush. It is expected that the full cleaning of underground storage from their deadly contents will begin no earlier than ... in 2031! Prior to this, it is necessary to conduct the necessary number of public hearings, interagency approvals, as well as carry out all the necessary preparatory measures. The situation, for example, is complicated by the fact that in the immediate vicinity of Mitholz pass the most important transport arteries, both automobile and railway, connecting the north and south of Switzerland. In particular, it remains to be decided what to do: to protect existing roads with the help of special engineering structures, or to build new, temporary ones.

There is, however, an alternative idea: not to touch the underground warehouse at all, but simply to heap it away from sin by a few tons of rock, which in which case will take on the shock wave of a new explosion. Nevertheless, many in the country believe that leaving this “gift” to posterity will be completely wrong. One way or another, in this matter the last word will be with the military responsible for security issues. Of course, they will heed the opinions and wishes of local residents, but they will not be the final ones to decide the fate of the Mitholz warehouse.

We are in Yandex Zen
Reports from the militia of New Russia for 1 September 2014 of the year
The Swiss company intends to create a mini-shuttle to launch satellites
28 comments
Information
Dear reader, to leave comments on the publication, you must to register.