The sudden displacement of CAA from Serakib is only a “warm-up”. A direct collision is indispensable. 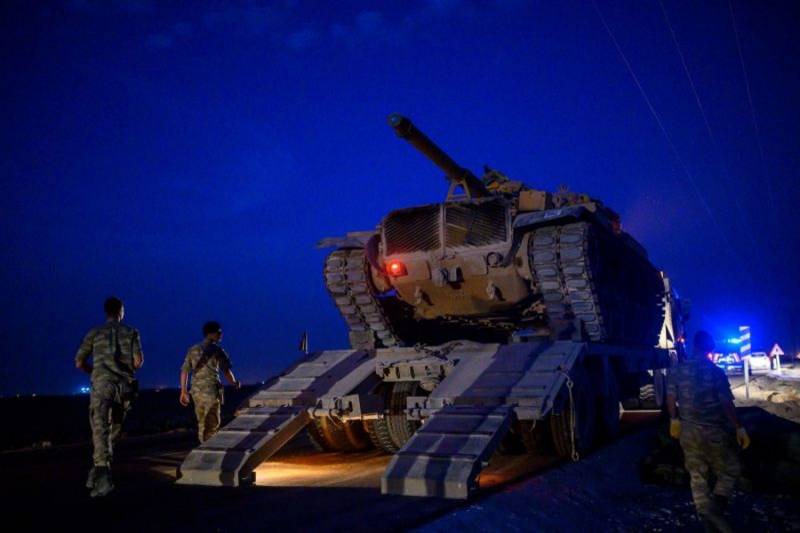 As you know, most of the eminent Russian news and military-analytical resources continue to focus the attention of the Runet audience on the official details of the general offensive operation in the Big Idlib conducted by SAA units (supported by tactical shock and reconnaissance aviation Russian Special Forces Mixed Aviation Brigade), despite the ultimatum rhetoric and threats from high-level representatives of the Turkish defense department, as well as the ongoing attempts by Turkish army self-propelled guns T-155 "Firtina" to organize effective fire support for the Tahrir al-Sham counter-offensive throws at east operating direction.

Meanwhile, it should be noted that the information on the operational-tactical situation in the Idlib theater of war, presented in these summaries, until recently was presented only in a rainbow light, replete with triumphant reports about the successful development of the offensive actions of the Syrian government forces both in the direction of Neyrab and Msibin (along the highway M4), and in the direction of the Al-Gab Valley, with the swift taking control of a number of dominant heights in the southern regions of the Greater Idlib. Exactly because of this reason news about the sudden counter-offensive jerk of the Tahrir al-Sham formations in the eastern operational direction (followed by the ousting of units of the 25th division of the Syrian Army Special Forces from the strategically important settlements of Serakib, Wadi Hadj Khalil and Wadi Mekar, as well as the transport interchange M4 -M5 ”) was greeted with a fair amount of bewilderment by ordinary observers who have a superficial vision of the situation in the conflict-ridden Syrian governorate.

Nevertheless, there is absolutely nothing to be surprised at. The operational and tactical prerequisites for the impending loss of Neurab and Serakib, as well as the shattering of the combat stability of the fortified areas of the first line of defense of the SAA in the area of ​​the M4-M5 highway, began to be traced back to the tenth of February. It was during this period, when Syrian and Russian media were full of pathos about the defeat of pro-Turkish militants in Neyrab, the engineering units of the Turkish Ground Forces began to build observational (observation) posts and fortified areas on the eastern section of the front in Big Idlib. They were hurriedly transferred to the same operational direction tank brigades, anti-tank calculations, batteries of the Turkish army’s barrel and rocket artillery, as well as significant reserves of the Tahrir al-Sham group, which previously covered the rear approaches to the Al-Gab valley in the south-western operational direction.

And therefore, the currently observed successful advance of the units of the 4th mechanized division of the SAA in the direction of the Al-Gab Valley is a matter of course, fully consistent with the tactical layout in this area of ​​the theater of operations; after all, the layered defense of the Tahrir al-Sham formations in southern ON was almost completely exposed, while the Turkish Armed Forces command decided to "project forces" directly in the Seracibian direction, as well as to form new oporniks in the rear areas of Idlib. As for the further implementation of the SAA march in the direction of the city of Jisr al-Sugur (in the north-western operational direction), then with a high degree of probability it is possible to predict its "stopping" by artillery and anti-tank assets of the Turkish army on the far approaches to the M4 and the settlements of Tel Avar and Muhanbal, which are a critical infrastructure for both the Turkish Armed Forces and the Tahrir al-Sham forces.

This scenario can only be impeded by the final decision by the Syrian Ground Forces and the Russian Air Forces command of the final suppression of the Turkish artillery firing positions at the time of its work on the advancing units of the 4th SAA division in critical areas of the Idlib theater. At the moment, the adoption of such a decision depends solely on the geopolitical will of Moscow, which, unfortunately, has a very precarious position amid intensification of Russian-Turkish military-technical cooperation, expressed in the competitive battle between the leading Russian and American military-industrial corporations over the Turkish market weapons.

There are still some progress towards the likely conduct of an operation to force Turkey to peace. In response to the deployment of additional T-155 Firtina self-propelled guns in Idlib, the Syrian army began transferring a certain number of long-range 152-mm towed 2A65 Msta-B howitzers to active sections of the Idlib military theater, which, when using the latest guided artillery shells, “ Krasnopol-D ”can suppress Turkish self-propelled guns and“ fresh ”convoys in the most remote areas of the province, right up to the Gilvegeozyu checkpoint in the Turkish town of Reyhanli.

We are in Yandex Zen
Idlib: three scenarios and three "component" parts
Spiders in the bank
120 comments
Information
Dear reader, to leave comments on the publication, you must to register.