The executioner Pokrovsky and the assault on Maykop 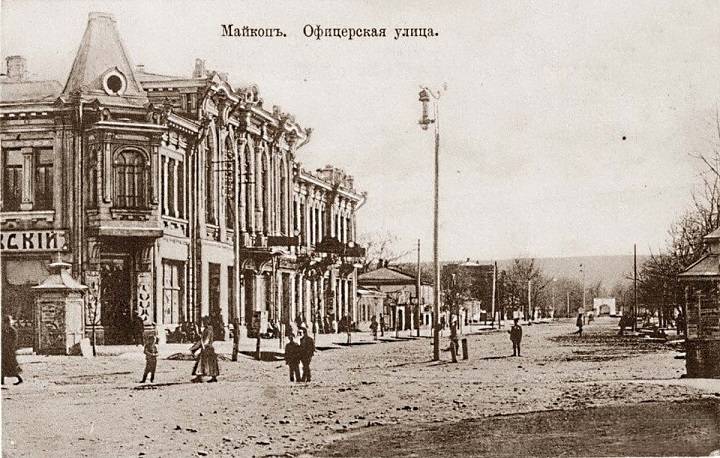 The beginning of the bloody 1918. The southern Russian city of Maykop, which is translated from Adyghe as "valley of apple trees", with a population barely exceeded 50 thousand inhabitants, did not stand aside from the great and terrible events of the Russian stories. Already in January 1918, Maykop passed into the hands of the Bolsheviks who raised the uprising. Despite the fact that the Kuban Rada, which declared independence of the Kuban, raged in Yekaterinodar, large cities of the region (the Kuban region and the Black Sea province) have already refused to obey it. And the openly discriminatory policy of the Rada, which left all rights to the Cossacks, who were not even 50% of the entire population, only aggravated the situation. In addition to Maykop, Novorossiysk, Tuapse, Armavir, Temryuk, etc., became “red”.


The Bolsheviks of the Kuban and the Black Sea began to form detachments of the Red Guard. In March 1918, the Red Guards and units of the 39th Infantry "Iron" Division, whose fighters switched to the Red side, having received news of the atrocities of the Cossacks of the Rada to the front, captured Yekaterinodar almost without a fight. The parliament, with the remnants of its never formed army, fled north to the Volunteer Army, with which an alliance was concluded against the Bolsheviks. Later, General Anton Ivanovich Denikin, one of the commanders of the army, in "Essays on Russian Troubles" will partly call this union a mistake.

Victor Leonidovich Pokrovsky, a hereditary nobleman, the main figure of the Maykop massacre of 1918. He was a career officer who graduated from the Odessa Cadet Corps, Pavlovsk Military School, and in 1914 - the Officer School aviation. Pokrovsky entered the First World War as the commander of an aviation detachment. In 1915 he distinguished himself by capturing two Austrian flight officers along with a fully operational Aviatik airplane. In this case, the capture occurred by forcing the enemy to land. 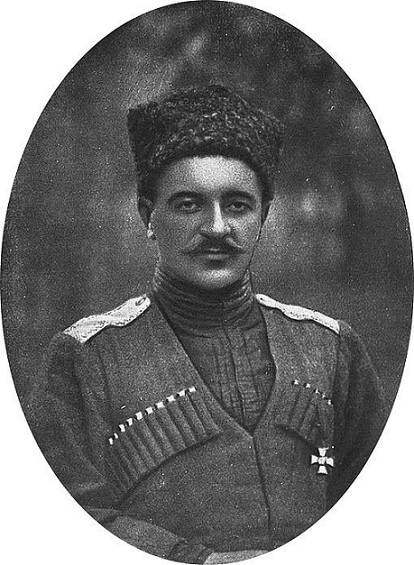 Victor Pokrovsky
Pokrovsky’s case is a vivid example of when unconditional personal courage and energy are completely nullified by extraordinary vanity, cruelty, love of power and the absence of even a hint of mercy. It was guided by these low-lying passions that Pokrovsky made contact with the Kuban Rada. He was assigned to form the Kuban Army. The "Army" numbered less than 3000 fighters. Having become at the helm of this large detachment, Pokrovsky became a significant person for the Rada. And in order to appease this power-hungry man, prone to cruelty and tyranny, he was already promoted to colonel and commander of the “army” in March 1918. And at the end of the same month, Viktor Leonidovich at the age of 29 became a general.

At the same time, Pokrovsky’s ambitions were by no means satisfied. He built intrigues with alarming frequency. All in the same year 1918, General Denikin received a report from General Romanovsky that Pokrovsky and Colonel Andrei Grigoryevich Shkuro intend to send troops to Yekaterinodar and make a coup, having dealt with the "party of the Black Sea" (independent Cossacks who advocated independence of the Kuban and having ties with provocateurs from Ukraine and the Germans). The coup did not take place, however, the Rada, seducing Pokrovsky, did not skimp on orders and ranks. 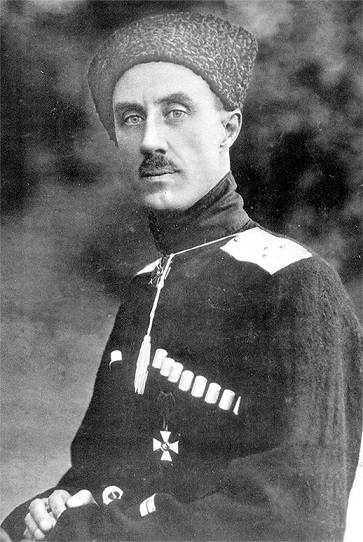 Peter Wrangel
Having earned a reputation as an upstart, adventurer and intriguer, Pokrovsky became famous for drinking and drinking, which often took place in the company of Colonel Shkuro at headquarters. No less flattering was the comment on Pokrovsky and his “legacy” by Baron and General Pyotr Nikolayevich Wrangel in his “Notes”:

“The collapse reached the top of the army. Politicized, intrigued, planted unworthy squabbles and machinations. Fertile soil opened a wide field of activity for large and small adventurers. Particularly noisy were those left overboard, consumed by unsatisfied ambition, the generals who had advanced beyond their merits: the former commander of the Caucasian Army, General Pokrovsky ... "
Later, the famous “black baron” Wrangel with great relief will write about the emigration of Pokrovsky to Bulgaria, wounded by the fact that he was not entrusted with a command post in the Russian army:

“The machinations and intrigues of dissatisfied generals have come to an end. At the same time as Generals Sidorin and Kelchevsky, Generals Pokrovsky, Borovsky, Pestovsky went abroad. Intrigue has stopped. ”

In August 1918, the Volunteer Army, in alliance with the Kuban Army (the Kuban Brigade) that joined it, finally (after the March failure) stormed Yekaterinodar. Under the onslaught of numerous Cossack White Guard gangs, Georgian Mensheviks, who stood on a nationalist basis, and, of course, Denikin’s troops, the Bolshevik front began to crumble.

Campaign of the Taman army in 1918. Hood. A. Kokorin
The Taman army under the command of Ivan Ivanovich Matveyev and his deputy future commander Epifan Iovich Kovtyukh with heavy fighting retreated towards Tuapse, leaving Novorossiysk. The movement of the troops was weighed down and tragic, because after the soldiers civilians fled, afraid of white terror, which was already burning with might and main in the Kuban. At the same time, advanced army detachments clashed with Georgian nationalist troops, and the rearguard had to periodically fend off groups of "Denikin" and White Cossacks. 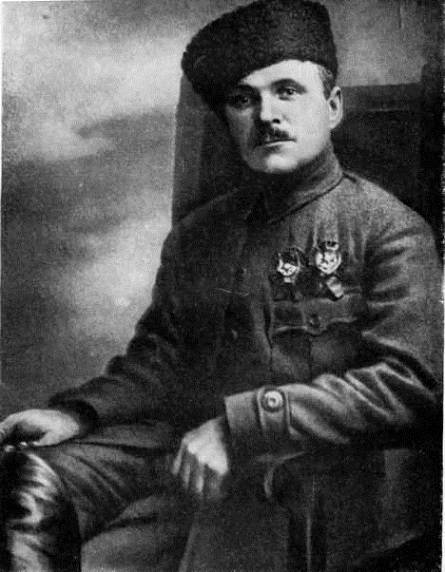 Epifan Kovtyuh
Having stormed Tuapse, occupied by Georgian troops, the Taman army deployed to the northeast and headed towards Armavir through the mountain ranges. But already in the area of ​​the village of Khadyzhenskaya (the modern city of Khadyzhensk), the Tamanians were attacked by units of General Pokrovsky. Heavy fighting ensued. Pokrovsky hoped to completely stop the attempt of the Bolsheviks to break through to the main red forces of Ivan Sorokin in the east and counted quite reasonably. The Taman army was battered, suffering from hunger, and its movement was constrained by refugees. At the same time, Pokrovsky had cavalry, artillery, and the number of his soldiers was over 12 thousand.

At the same time, the troops of Pokrovsky, coordinating their actions with the anti-Bolshevik Cossack detachments of General Alexander Alexandrovich Geyman (about 5 thousand bayonets and up to 1 thousand cavalry), entered the villages of Kubansk, Tula, Abadzekh, Dagestan and Kurdzhip. Thus, they took in a half-ring Maykop, which was still in the hands of the Bolsheviks. At the same time, like-minded people in Maykop had no connection with the Tamanians, therefore they did not suspect that large forces were making their way east. 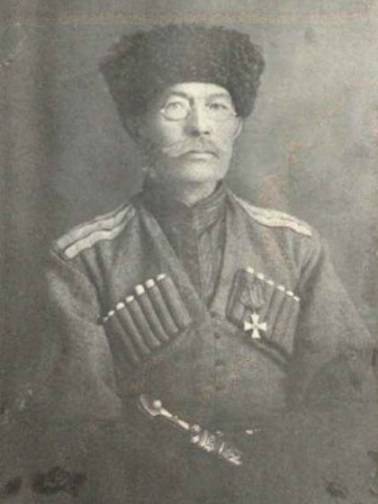 Alexander Geyman
Taking advantage of this, on September 7, Pokrovsky and Gaiman threw large forces at Maykop. The fighting lasted all day, and only at dusk did the Bolshevik detachments leave the city, moving east beyond the Fars River, where they equipped defensive positions.

For Maikop, taken by the Cossacks, the days of a peculiar rehearsal of the bloody massacre, which will come in the 20th of September, have come. Pokrovsky, in his best traditions, began to firmly restore his “order”. However, the reprisals were of a singular nature and concerned the Bolsheviks and sympathizers. In full force Pokrovsky and his accomplices were not allowed to roam the Taman army.

On September 10, the Tamanians launched an attack, breaking east towards Armavir to reunite with the main Bolshevik forces in the North Caucasus. A day later, the Belorechenskaya village (now Belorechensk) was occupied, and the troops of Pokrovsky were defeated. Some of the vain general’s fighters were forced to retreat to the village of Tsarskiy Dar (now Velikovechnoe), while others retreated directly to Maykop. But Pokrovsky did not want to miss the Tamanians, so he again began to gather strength. 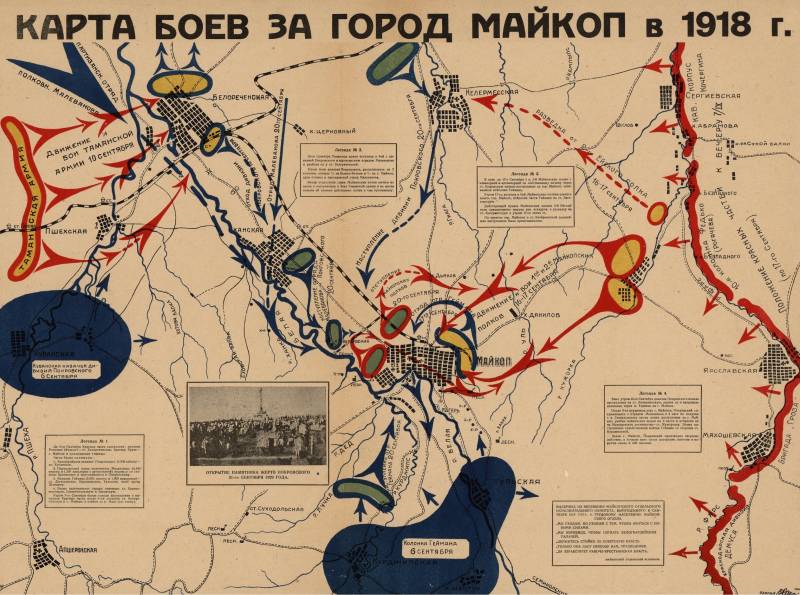 According to one version, the troops holding the defenses along the Fars River continued to remain ignorant of the actions of the Taman Army, while another, on the contrary, used the weakening of the Maykop garrison by the restless Pokrovsky. One way or another, but on the night of September 17, 1918, the 1st and 2nd Maykop regiments, with the support of the cavalry, occupied Maykop. In favor of the fact that the regiments had no connection with the Tamanians, the fact is said that they did not begin to develop the offensive, although they could cut through the forces of Pokrovsky and Gaiman.

The assault on Maykop and the beginning of reprisals

Upon learning of the loss of Maykop, Pokrovsky left only a small detachment to pursue the Tamanians breaking through, and he deployed all the available forces, including Gaiman and small groups of white Cossacks, to storm the city. In the early morning of September 20, thousands of angry Pokrovsky fighters fell in from the north on Maykop. Up to nine times, anti-Bolshevik troops tried to storm the city, but each time they came across stubborn resistance. Therefore, Pokrovsky constantly maneuvered, trying to find the most vulnerable spot in the defense of the Reds.

By 16:00, the defenders almost ran out of ammunition. Increasingly had to use bayonets. As a result, during the retreat, almost all the Bolshevik fighters were killed. Only two disparate groups of 250 people were able to break through to the east. By evening, General Pokrovsky triumphantly drove into Maykop, "freed from Bolshevism." The city was in a deplorable state: corpses were lying on the streets, some buildings were destroyed or burned down, people were hiding, not understanding what was happening. 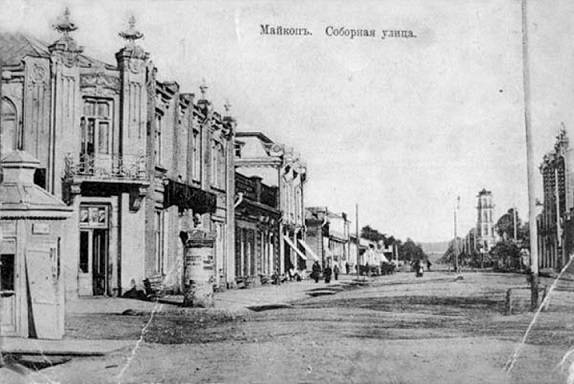 And in this infernal bloody chaos, Pokrovsky began to restore order in his usual manner. According to his order, all power in the city passed to a certain esaul Razderishin, who was appointed "commandant of the city of Maykop." Razderishin, apparently not inferior to his commander in energy, instantly released "Order No. 1 to the city of Maykop":

“I order the population of Maykop to immediately bring the latter to a decent appearance.
1. To clean and sweep out all the streets and squares of the city, courtyards, bazaars. In houses, wash windows, stairs and floors.
2. The city government to increase the number of lights and now illuminate the city.
3. In order not to clog it again, I forbid to scatter fruit peels and husks of seeds along the streets. I forbid the sale of the latter.
4. I forbid the sale of fruit on the streets, it is allowed only in bazaars and in shops.
5. Clean out all cesspools and trash pits.
One day the city should be brought into full order.
The fulfillment of all the aforesaid is entrusted to the population, the city administration and the quarter elders. "I take it upon myself and warn that for failure to fulfill my requirements the perpetrators will be subject to fines and corporal punishment."

The evil irony is that the order to hold this schizophrenic subbotnik with the possibility of being beaten to the degree of disability was far from the most inadequate of those that were then issued by the new authorities with the full approval of General Pokrovsky. Soon the tragic events that went down in history as the Maykop massacre will begin.

We are in Yandex Zen
Chernobyl notebook. Part of 3
Cossacks in the Civil War. Part II. 1918 year. In the fire of fratricidal Troubles
119 comments
Information
Dear reader, to leave comments on the publication, you must to register.