Why were ekranoplanes only in the USSR? 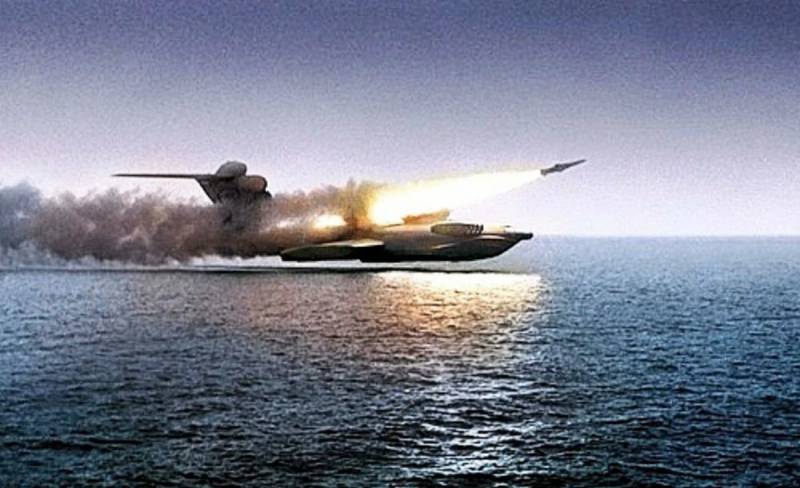 WIG. Very original and original cars with great potential, as they say now. The brainchild of Minister of Defense Marshal Dmitry Ustinov, who greatly helped the appearance of these machines in general and the "Caspian Monster" in particular.


В stories (unfortunately) the USSR remained both the first serial landing landing craft "Orlyonok" and the first strike "Lun" with anti-ship missile "Mosquito" on board. The last "Eaglet" was decommissioned in 2007, the "Lun" seems to be mothballed, and there are no reasons for re-conservation or any work on it. 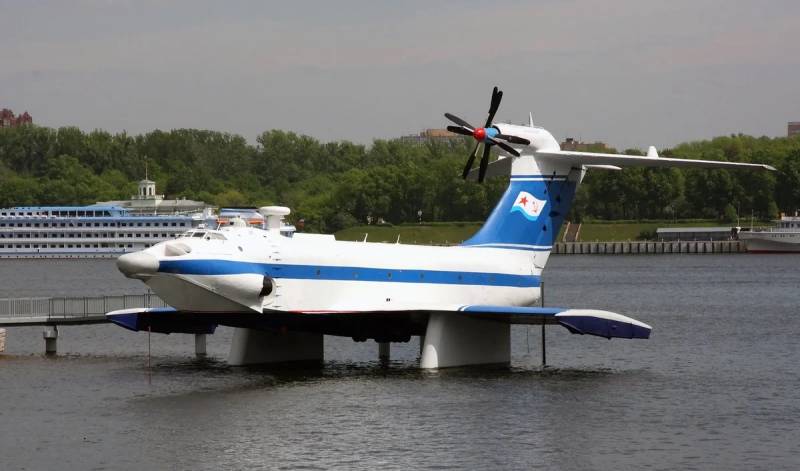 The death of Ustinov and the collapse of the Soviet Union put an end to the whole idea of ​​ekranoplanes. Today, talk about this sometimes comes in, law enforcement agencies show interest, but all this will remain at the level of chatter for many reasons.

And really, what's overseas? Really didn’t want to do the same, only cooler?

They wanted to. Not like ours, but they took the idea very seriously. Most importantly, in the United States there was a man no less gifted than our Rostislav Alekseev, the creator of Soviet ekranoplanes. And you, dear readers, fans of everything flying in particular, this person should be well aware. 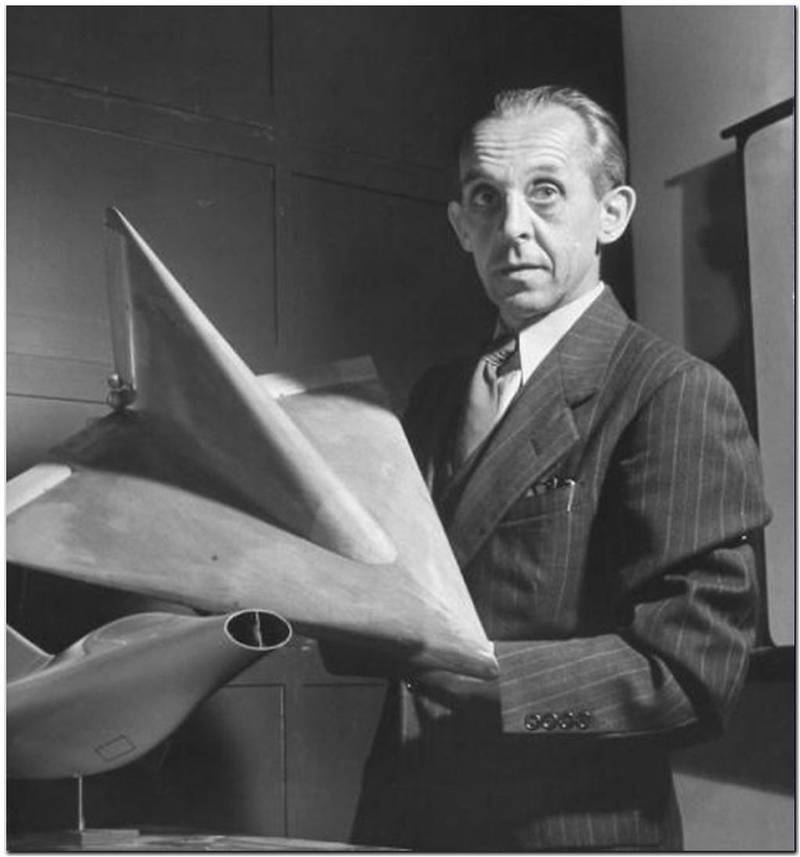 Yes, the same one, the creator of the DFS-194 airframe, from which, when processing with a hammer and a file, Me.163 turned out. That is, a person who knows how to work his head is indisputable.

Lippish could, in principle, compete with Alekseev. It could, especially as the delta wing, jet engines - this is what Lippish really knew how to do.

Moreover, the very idea of ​​ekranoplan was Lippis not alien. He worked in this direction, since he had all the conditions for this in the USA. And when we began work on the KM apparatus (“Ship Model” and not “Caspian Monster”), and this happened at the very beginning of the 60s, Lippish worked absolutely in parallel with Alekseev. And he got no less outlandish devices, to be honest. 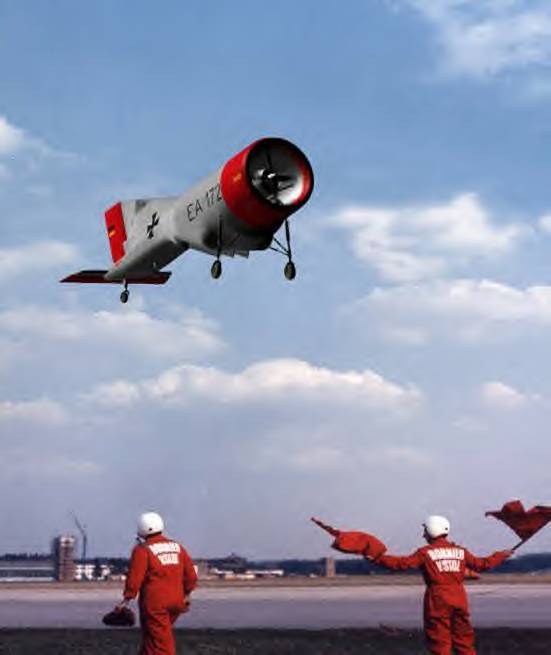 This is still a plane. "Aerodyne". Wingless plane. But you realized that Lippisch was a very extraordinary designer.

But if the first Soviet SM-1 ekranolet made its first flight on July 22, 1961, and the KM flew in 1966, then Lippish was not so bad. In 1963, the first American device Collins X-112 designed by a German engineer also began to fly pretty well.

The difference in schools and constructions was significant. Alekseev made machines with a short and straight wing, Lippisch (naturally) with a triangular reverse sweep wing. Alekseev’s machines were somewhat more profitable, because they easily allowed scaling, that is, the creation of a multiple model of any size.

Each time Lippisch had to re-calculate everything, but his cars were distinguished by ease of operation, great stability and maneuverability. For Alekseev’s machines, pilots had to be retrained, and retrained for quite some time. And the creator himself was generally considered the best pilot of Soviet ekranoplanes.

It is impossible to say that Lippisch cars were not interested in anyone in the USA. The military looked with pleasure at the demonstration flights of all German ekranoplanes, and the X-112, and X-113, and RFB X-114. Moreover, intelligence reported that the Russians also come up with something like that. 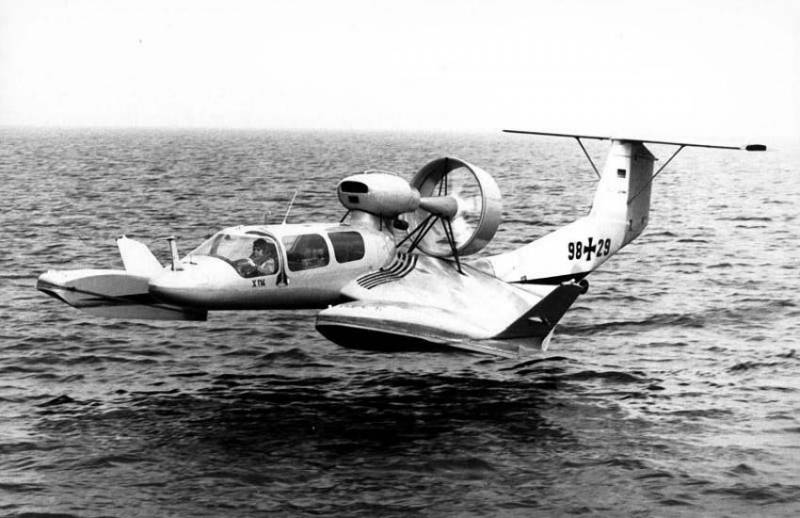 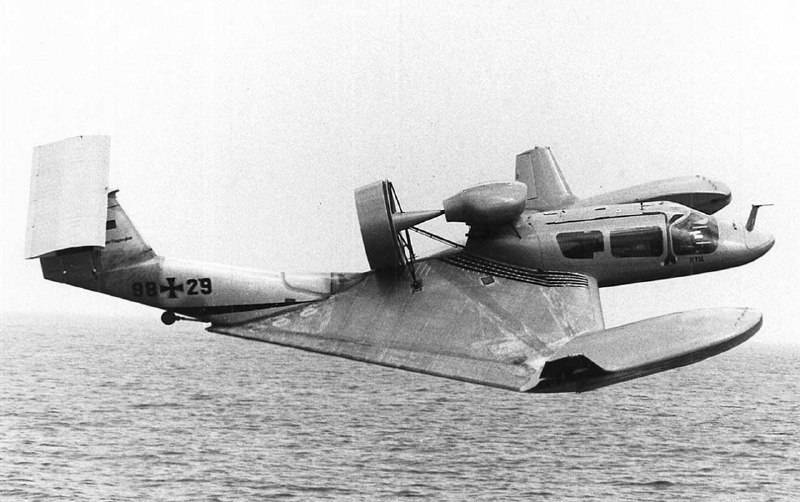 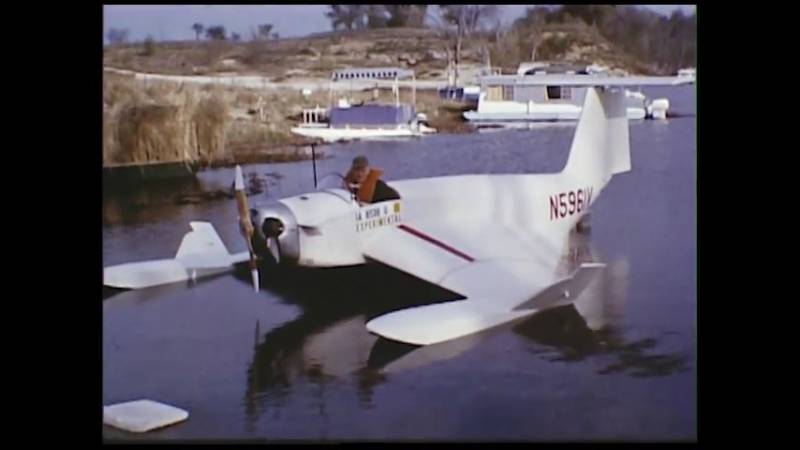 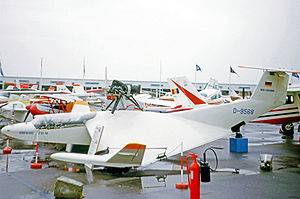 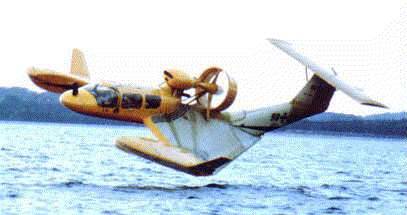 So in the USA they didn’t doze off either and as a result they put Lippisch for the project of a large ekranoplan. And it happened two years before the first flight of the CM.

The military was interested in this device. True, they did not yet know how to apply it. But NASA knew and also began to ask the price of ekranoplan. Well, everything was clear with the space agency, they were interested in transport, which could deliver particularly valuable details to the spaceport and as a search and rescue tool.

Here you need to know that the first capsules with astronauts did not land, but were brought down in the Atlantic Ocean, so the faster the reaction of the search engines, the brighter the prospect for astronauts became.

However, the presence of interest is not at all a prospect. Any of us may show interest in, say, the new Mercedes model. But God forbid that one in a thousand could buy. You need to understand why you need a car of this class in general, and whether it will pull the budget in particular.

That's about the same thing happened with the Americans.

They had an interest, they had money (as usual), but there was no understanding why they needed these complex and expensive devices. And the United States had a fleet. More precisely, several fleets, capable, according to the command, to solve all the problems of the day with the help of smaller aircraft carriers, battleships and ships.

It was quite logical. Fleets could be in any area of ​​the oceans and there to carry out what was assigned to them. Without the use of ekranoplanes, especially since there were no tasks for them.

The USSR had a headache of a completely different nature, although it was called exactly the same: US Navy. And our admirals were loaded with the task of neutralizing this fleet. But there was nothing to neutralize.

And here the variant with an ekranoplane seemed quite normal, which had a good camouflage, moving quite low above the water, and simply excellent speed and range. 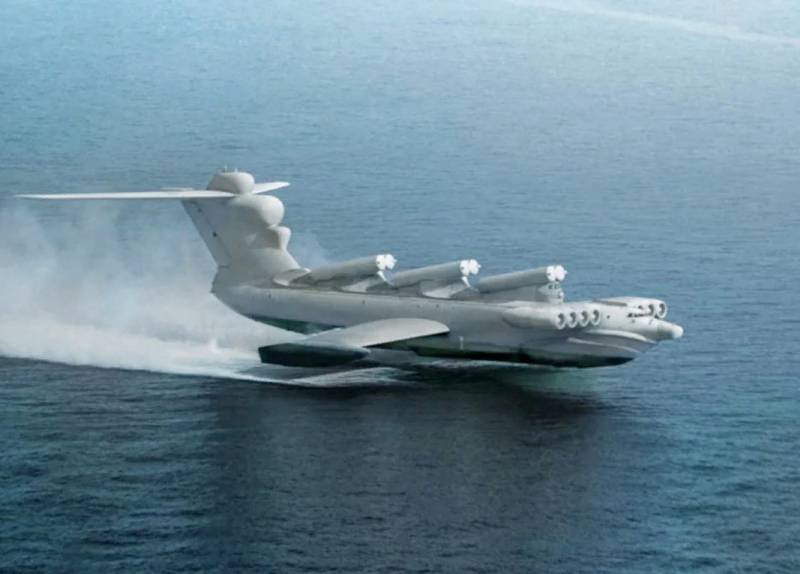 Yes, it was a very complex technique, it was not in vain that from the first flights in the 60s to the appearance of sane samples, ready for mass production, as many as 20 years have passed.

Comparable to the work of the Queen.

But there was nowhere to go, and with the help of ekranoplanes, the Soviet command tried to compensate for the lack of normal ships.

But in the USA there were no such problems, they had enough ships. Therefore, an impacted ekranoplan, capable of quickly flying up to ... Here, but where was it supposed to fly up? To the carrier carrier group of the Soviet Navy? So they still had to be created, these groups. To our shores? Well, too so-so pleasure.

The only thing that was enough for American desires was a patrol ekranolet with missile and artillery weapons, a hangar with an anti-submarine helicopter (!), Bomb launchers ... In fact, it’s just a flying corvette of the near zone.

When the United States calculated how much such an ekranoplan would be in dollars, they realized that building several corvettes was both easier and more reliable for the same money.

Of course, such a flying patrol corvette could control a larger sector of the coastal waters of the United States than usual, but the price played a major role here.

And there was another project that could easily beat Lunya with its anti-ship missile system Moskit.

The famous company "McDonnell-Douglas" proposed a project not just an ekranoplan, but a carrier of ballistic missiles!

The Douglas decided to create a colossus that would even frighten the Moon in size. And as an weapon, besides all the little things there like anti-aircraft missile systems, four launchers of SLBM Trident would be placed in the hold of this monster.

The idea was tempting, but the adherents of the usual method of delivering missiles using a submarine still won.

And when the price was announced ... In general, it turned out a little expensive.

But nowadays, the idea does not fade away. Yes, in modern Russia, even if they say about ekranoplans, it’s so ... The plans for the day after tomorrow. Well, or when once again you need a reason to threaten. Say, we can, if we want. And then everyone will have a lid.

And in the States just recently returned to the topic. But not in terms of the percussion apparatus, but as a means of quickly delivering military contingents and equipment with equipment to anywhere in the world. The role of the “World Peacemaker” is as if obliging.

Considering how much time the US Army and Navy spend on logistics, dragging their soldiers around the world, it is not surprising that we would like everything to be more efficient than the same Desert Storm and Desert Fox.

And what would be interesting would be to load instead of a landing ship a battalion of marines with infantry fighting vehicles and tanks in the ekranoplan and after 12 hours of summer land somewhere in the Persian Gulf, for example ... 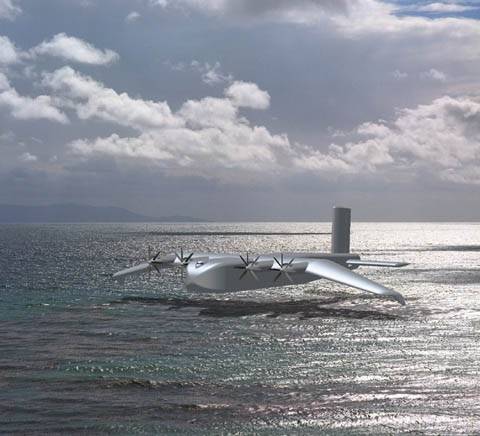 The giant from the aerospace concern promised to transport 1200 tons of cargo to a range of 18 thousand kilometers. The project, of course, took into account the achievements of Douglas. The Pentagon seemed to support the idea, but ... the navy refused, on which a headache would be laid for the maintenance and maintenance of this huge. As a result, the project "did not play."

Plus, you should pay attention to the fact that far from any weather and not with any excitement you can use ekranoplans. It is not for nothing that we mainly saw them in the Caspian, in the Caspian, which is calm by world standards. 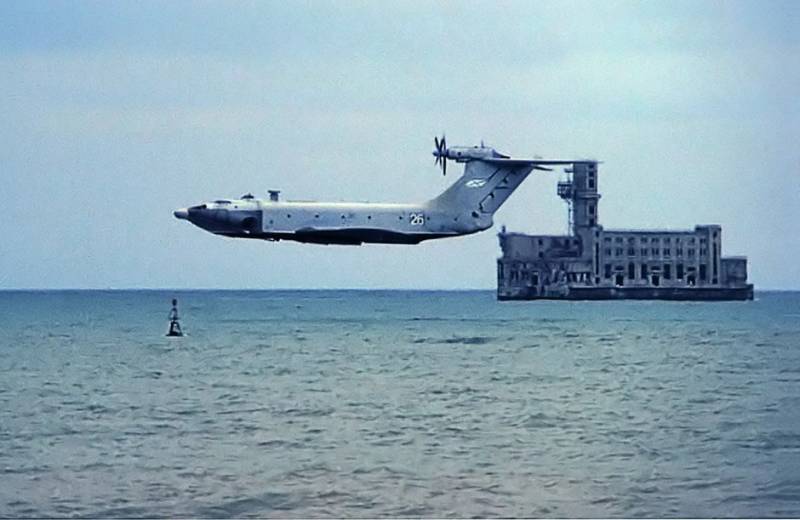 In the USA, it would be more difficult to use such machines, since the Atlantic and the Pacific are not our seas. Yes, in the Black, Caspian, Baltic seas, closed waters, it would be much easier and safer to use ekranoplanes than in the ocean, and even during the bad weather season.

So the Americans were able to ekranoplanes. It is a fact. Three things stopped them: the enormous cost, slurred use and, perhaps, the cancer that Lippis sentenced in 1976. It is likely that if a talented German lived longer, the result could be different.

In fact, the ekranoplane is perhaps an instrument of the future. Far, because today to build such machines, neither the United States nor Russia is simply not profitable on a budget.

In the Soviet Union, the idea was addressed because the country was not able to build such a fleet that could withstand the American one. And the very use of the same “Moon” with its “Mosquitoes” against the connection of ships looked so-so ... Like the Japanese kamikaze.

Yes, a fast and poorly visible for radar ekranoplan, of course, could approach the distance of launching anti-ship missiles. At 90-100 km. And even most likely, would launch rockets. Further, excuse me, only God knows if they would give him leave or not. Most likely not, and this colossus would have been simply shot by airplanes easily and naturally.

So ekranoplanes were in the USSR, because in that country they could build them and imagined how to use them favorably. In the United States, too, they could create something like this, but there was no certainty in the application.

Another question is that if tomorrow in the States they decide that they need such an apparatus, there is some certainty that they will build ekranoplans. As usual, regardless of financial losses.

We are in Yandex Zen
Ekranoplanam - to be!
Flying over the waves
182 comments
Information
Dear reader, to leave comments on the publication, you must to register.