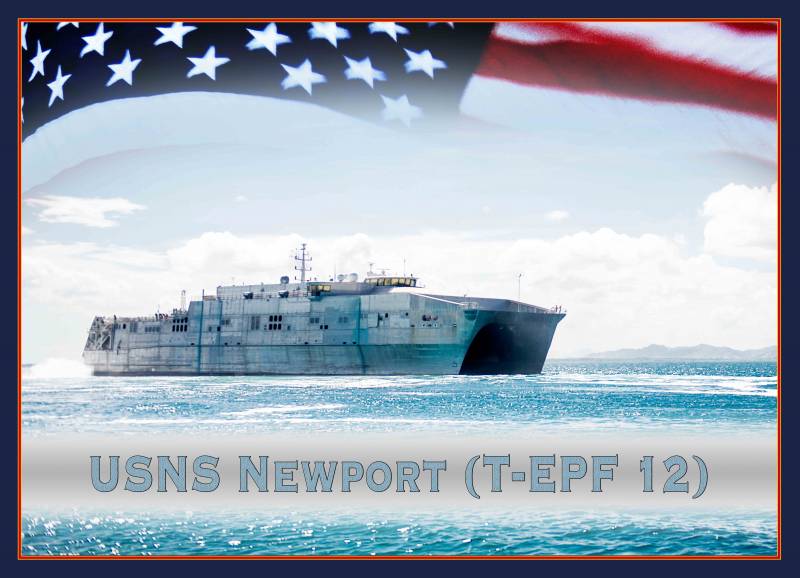 At present, Austal USA, the American branch of Austal Australia, is engaged in the construction of the Spearhead project for the US Navy by Expeditionary Fast Transport or EPF. The existing order has been completed by more than two-thirds, and work on it continues. The other day the launch of the next 12th vessel took place. In the coming months, USNS Newport (T-EPF-12) will be tested and sent to service.

The construction of EPF ships lasts about 10 years. During this time, the Austal USA shipyard (Mobile, Alabama) managed to work out all the necessary technologies and establish a real conveyor production. All construction and testing works are carried out in full accordance with the schedule setting a very high pace.

So, the contract for the construction of the new ship “Newport” was signed on September 16, 2016. The bookmark took place much later, on January 29, 2019. Construction lasted less than 13 months and has now been completed. On February 21, 2020, shipbuilders began the process of launching the vessel. In connection with the specifics of production capacities and the water area, such events include several sequential actions and take about two days. 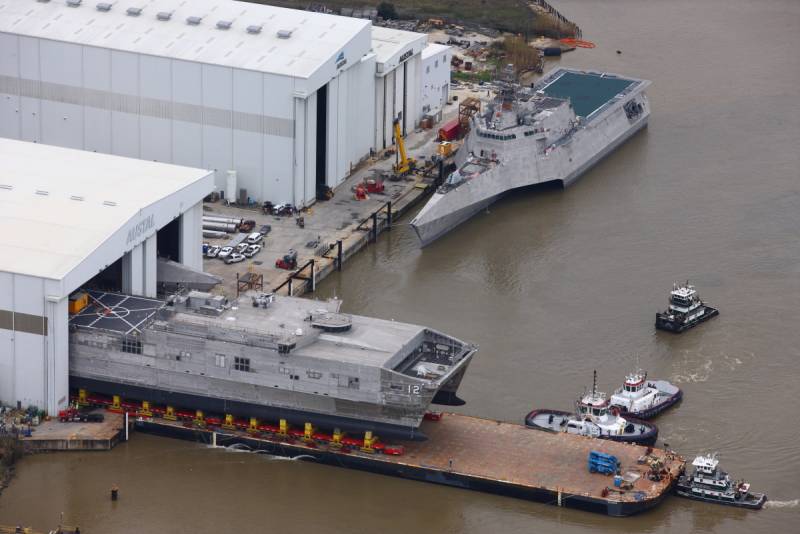 Conclusion of the vessel from the assembly shop to the barge
Launching began with the withdrawal of the vessel from the assembly shop. Using special conveyors, the finished product was brought to a barge and delivered to a dry dock. Direct launching took place due to the immersion of the dock. After that, the transport was towed to the mooring wall. Such procedures are carried out regularly and not only as part of the EPF program, so they are well developed.

In the near future, Austal USA will conduct sea trials of the new vessel. Upon completion, USNS Newport (T-EPF-12) is expected to be delivered to the customer. All events will take several months. The customer will receive a new transport before the end of this year.

Austal USA received an order from the US Navy to design and build the Joint High Speed ​​Vessel or JHSV (EPF designation later) in 2008. Initially, the contract provided for the construction of one vessel with an option for nine. The head sample has confirmed its characteristics, so new contracts have appeared. So, by the end of 2010, Austal USA had firm orders for three vessels. Another seven were negotiated by other agreements and options. 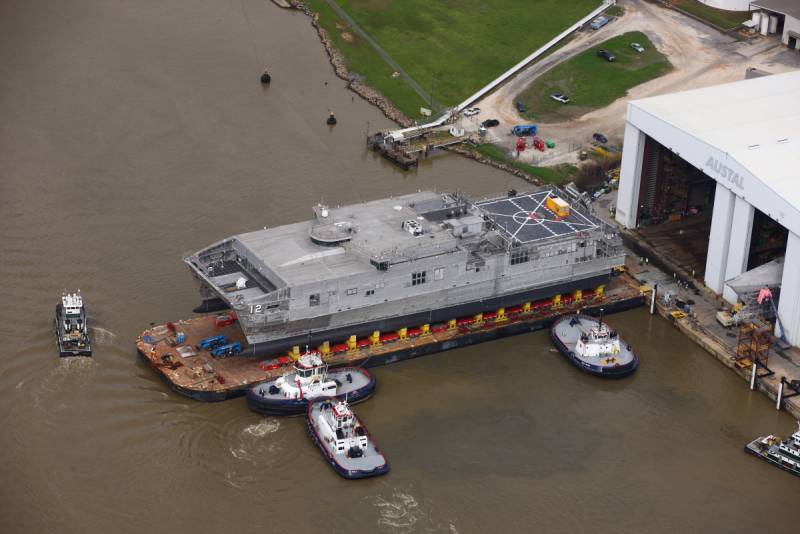 In 2011, the Navy adjusted their plans. Now for needs fleet It was proposed to order about 20 vessels with delivery during the tenth and twenties. However, such plans were soon abandoned, and the series was limited to a dozen ships. The latest EPF construction contracts in accordance with these plans were signed in 2012.

However, soon new discussions began, the result of which was the expansion of the series. In September 2016, Austal USA received an order for the 11th and 12th EPF ships. In October and December 2018, two new agreements were signed on preparations for further construction. In March 2019, two more vehicles were officially ordered.

It is possible that new orders will appear in the near future, but even without them the Austal USA plant has enough work. Right now his task is to test the USNS Newport (T-EPF-12), build the next USNS Apalachicola (T-EPF-13) and prepare for the USNS Cody (T-EPF-14).

Austal USA has extensive experience in the construction of catamarans of various classes, and it was used in the development of promising vehicles for the US Navy. The design of the Spearhead-class ships is based on proven solutions, and also includes some borrowed units. All this simplified the design process, and also reduced the complexity and cost of production. 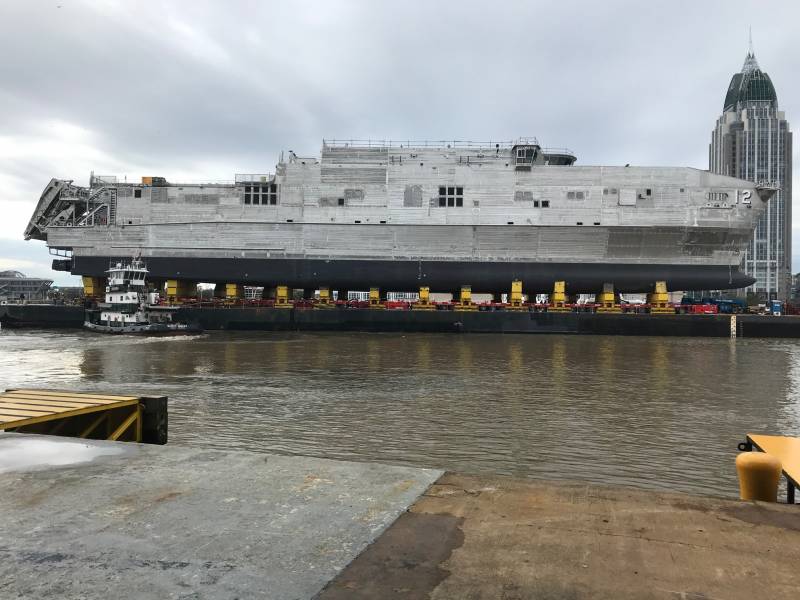 The lead ship USNS Spearhead (T-EPF-1) was laid in July 2010, and launching in September 2011. The testing process was delayed for more than a year, but in December 2012 the vessel was handed over to the customer. The completion of work on the lead vessel allowed the construction of the first production ship to begin - it was laid in November 2011 and launched in October 2012 with some delay relative to the original plans. By that time, since May, the third ship was already under construction.

EPF vessels are relatively large in size, which is why they are assembled at only one slipway position of the plant. As a result, only one such order can be built at a time. Quickly enough, the company managed to establish a production cycle that ensured all tasks were completed. It takes from several months to a year to build one transport. Then they spend several months preparing for the construction and carry out a new bookmark.

According to this scheme, to date, 12 vessels have already been built. Another high-speed transport is being built. The last EPF ordered is pledged this year. Two ships will be completed by 2021 and a few months after that they will be handed over to the customer. 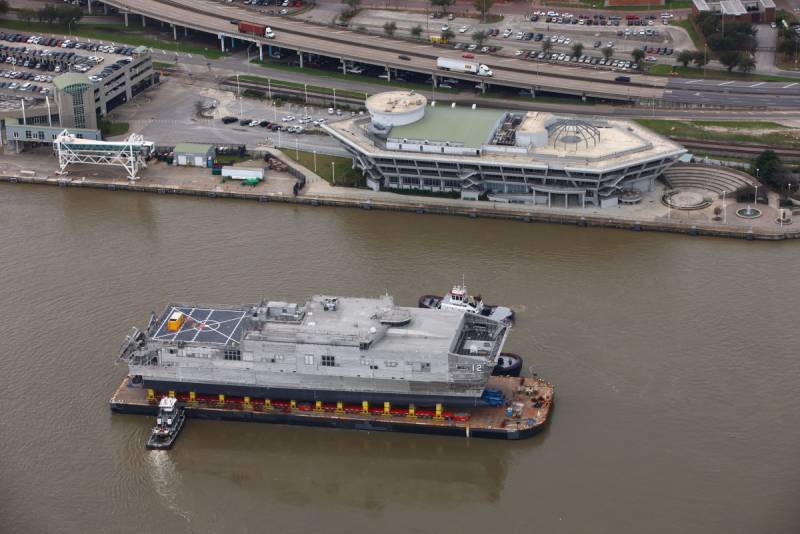 The ship is being transported to the dock
It should be noted that the construction of ships at a high pace is facing some problems. So, in 2011, an accident occurred, as a result of which a large block of the USNS Choctaw County (T-EPF-2) vessel structure was damaged. This incident negatively affected the construction and commissioning dates.

Serious problems appeared in 2015. The USNS Spearhead (T-EPF-1) head transport returned from another march with damage to the bow of the hull. The reason for this was the lack of structural strength due to errors in the design of lightweight units. Based on the results of these events, it was necessary to repair and modernize the five ships built and make changes to the construction of the ships under construction.

The EPF / Spearhead-class high-speed expeditionary transport vessels are designed to quickly transport people and equipment by sea over long distances. The design of the vessels is optimized to solve such problems - they are able to take on board approx. 550 tons of cargo and carry it for 1200 nautical miles, developing a speed of up to 40-43 knots. 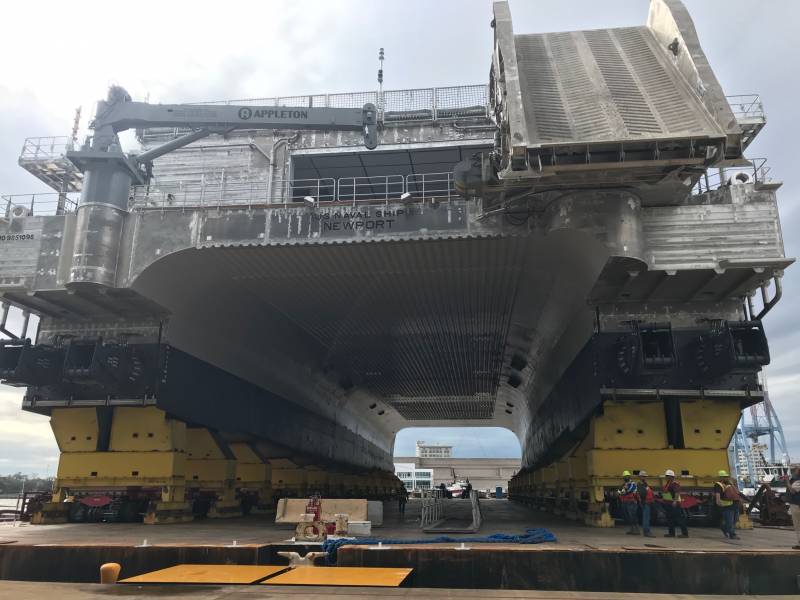 EPF is an aluminum catamaran with a length of 103 m and a displacement of 1500 tons. The power plant includes four diesel engines that drive water cannons. The bulk of the internal volume of the hull is given for the placement of the payload - for this, residential and non-residential compartments are provided.

For transporting people, EPF has several cockpits that can be equipped with passenger seats (312 pcs.) Or bunks (104 pcs.). The duration of the voyage, taking into account the ship's reserves, is limited to 4 or 14 days, respectively. Own transport crew consists of 41 people.

For equipment and other goods intended deck area of ​​1900 sq.m. Loading is carried out using its own aft crane; the technique is driven on its own along the folding ramp. The presence of such systems allows loading and unloading independently, which reduces the requirements for port equipment. 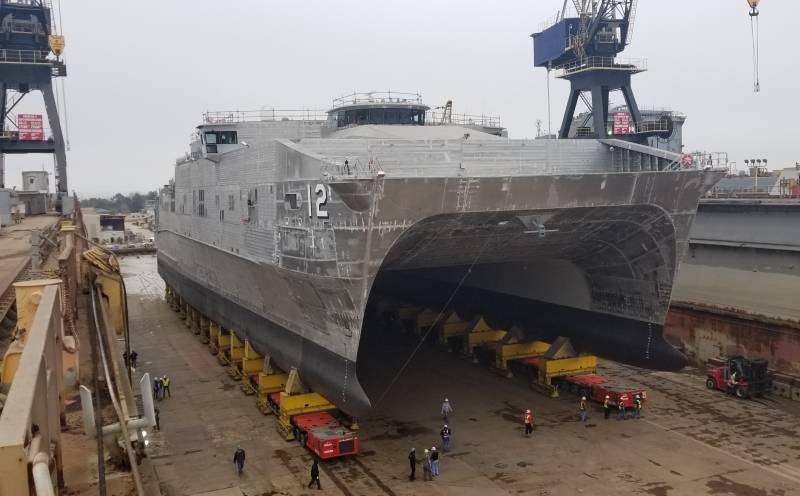 Transport in the dock; launching soon
The ship is capable of carrying a helicopter. There is a take-off area on the deck. There is also a place for transporting a helicopter. The operation of all machines of this class available to the Navy is ensured. At the same time, the MVF 22 tiltrotors cannot carry EPF - the exhaust of their engines can damage the deck.

The main objective of Spearhead / EPF is to transport battalions along with their weapons and equipment. It is also possible to use ships in other transport or humanitarian operations. In particular, the deployment of a mobile hospital directly on the cargo deck was practiced. EPFs have high potential, an important component of which is high speed.

It should be noted that EPFs are not the largest or cargo transport vessels at the disposal of the US Navy. However, the limited capacity is offset by other characteristics. Spearhead is capable of delivering combat-ready units to the theater of war faster than other transport or landing ships.

The capabilities and abilities of EPF vessels have been repeatedly confirmed through a variety of exercises and other events. Success in operating the first vessels of the series contributed to the emergence of new orders. It is precisely because of this that the initial series of 10 vessels was expanded to 14. Thus, the US Navy can now involve a dozen high-speed transports at the same time, and in the coming years, such opportunities will increase due to new pennants. Already this year, the fleet will receive the 12th transport of a new type, recently launched. And two more will follow.

We are in Yandex Zen
Between the sea and the land. US Marine Corps strategy on the verge of change
Memo to mercenaries in Africa
45 comments
Information
Dear reader, to leave comments on the publication, you must to register.