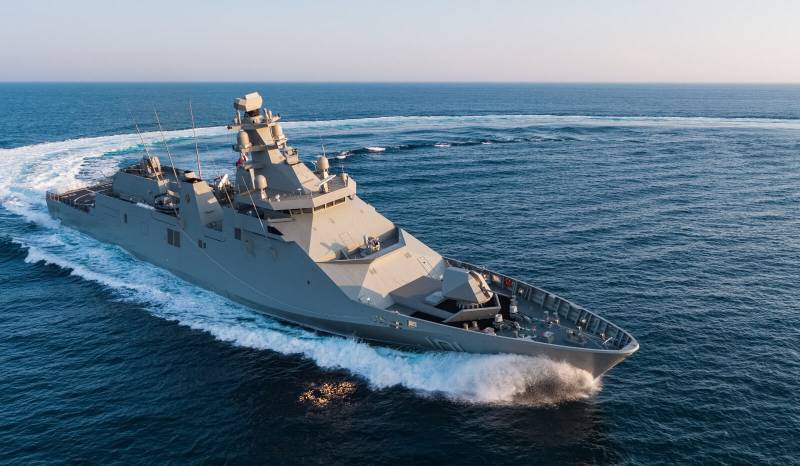 Sea trials of the frigate Reformador

On February 6, 2020, a new warship entered the Mexican Navy. The ceremony of commissioning the frigate "Reformador" was held in the city of Salina Cruz. The frigate was built at the local naval shipyard under the project SIGMA 10514 by Damen. Frigates and corvettes of this series have been built since 2005. During this time, 10 ships were handed over to customers, and in total at the moment the series size, taking into account the planned deliveries, is up to 18 ships. SIGMA 10514 ships, as well as smaller displacement corvettes, built according to earlier projects, are already in service with the Navy of Indonesia, Morocco and Mexico. Since 2013, Vietnam has also shown interest in the project, which cannot agree with Russia on the details of the contract for the purchase of two more Cheetah-3.9 corvettes (project 11661E).

Technical features of the SIGMA 10514 project

All ships of the SIGMA 10514 project, like many other Damen projects, are modular and scalable. The lineup is represented by both SIGMA 9113 project corvettes (maximum length 90,7 meters) and light frigates 10514 (maximum length 105,11 meters). Several intermediate projects are also offered for customers, in which the first digits always indicate the maximum length of the ship's hull. Even a miniature high-speed corvette of the SIGMA 7513 project (speed 34 knots) is available to customers.

Modular design is a hallmark of many Damen projects. This solution allows you to quickly scale ships based on the requirements and financial capabilities of the customer. The basic design can be easily changed since the number of body segments can be easily reduced or increased. The frigates of the SIGMA 10514 project are currently the largest ships of the entire specified series. Their standard displacement is 2365 tons, total displacement up to 2800 tons. The length of the ship is 105,11 meters, width - 14,02 meters, draft - 8,75 meters. The crew of frigates of the SIGMA 10514 project consists of 122 people. 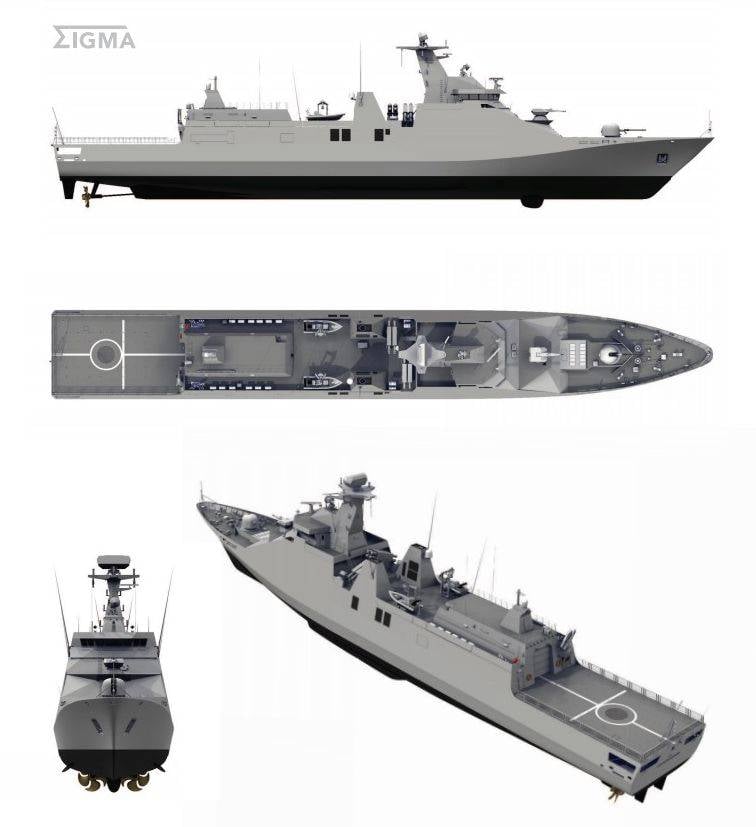 Projections of the frigate SIGMA 10514
The frigates of the SIGMA 10514 project are equipped with the main power plant of a combined type, this is a diesel-electric power plant (CODOE). The installation includes two diesel engines with a capacity of 10 kW each, as well as two electric motors with a capacity of 000 kW each. The ship’s power plant operates on two variable-pitch propellers with a diameter of 1300 meters. The power plant provides the ship with a maximum speed of 3,65 knots (approximately 28 km / h). Cruising speed - 52 knots (18 km / h). The economic speed is 33 knots (14 km / h). On electric motors, the ship can reach speeds of up to 26 knots. When traveling at a speed of 15 knots, the cruising range reaches 14 nautical miles (approximately 5000 km). The autonomy of navigation in terms of provisions and water is up to 9300 days.

The composition of the armament of combat ships of the SIGMA 10514 project varies depending on the country of the customer. At the same time, ships have anti-ship missiles, anti-aircraft missiles, artillery weapons and torpedo tubes. Despite being a member of the Mexican fleet the ship "Reformador" (Reformer) officially entered as an ocean long-range patrol ship, in fact, it is a light frigate with a full set of weapons, allowing you to fight all types of sea, air and ground targets.

The main weapons of ships are anti-ship missiles. The standard option involves placing on board two launchers for 4 missiles each. At the same time, it is possible to install one launcher on four missiles and two on two on the delivered ships. The missiles used vary depending on the wishes of the customer. So on the frigate, which was adopted by the Mexican Navy, installed two launchers for two missiles each. If necessary, the composition of the armament can be easily expanded to 8 anti-ship missiles. All missile and artillery weapons, as well as torpedoes, Mexico acquired in the United States. So on “Reformador” will install 4 anti-ship missiles Boeing RGM-84L Harpoon Block II. This subsonic missile reaches speeds of up to 850 km / h and is able to hit targets at a distance of up to 278 km. The mass of the warhead of the rocket is about 220 kg. In turn, the Indonesian light frigates of the SIGMA 10514 project are armed with 8 MBA Exocet MM40 Block 3 anti-ship missiles, the maximum flight range of which reaches 180 km.

Option frigate SIGMA 10514 with a standard set of weapons
The air defense of the ship is presented as standard with a 12-charge vertical launcher for anti-aircraft guided missiles of the MBDA MICA VL complex. This is a short-range SAM, capable of effectively hitting air targets at a distance of 1 to 20 km. It is these French missiles that are installed on the Indonesian frigates. On the Mexican "Reformador" the composition of air defense weapons is improved. The ship has an 8-charge vertical launcher for medium-range missiles Raytheon ESSM (range of air targets - up to 50 km), as well as a 21-charge launcher for short-range missiles Raytheon RAM Block II (range of air targets up to 10 km).

The standard artillery weapons of the SIGMA 10514 frigates are represented by the 76 mm Leonardo (Oto Melara) Super Rapid artillery mount, which has a rate of fire of up to 120 rounds per minute and can be used for firing at coastal, surface and air targets. In addition, two 20 mm Denel GI-2 automatic guns and one 35 mm Rheinmetall Oerlikon Millennium Gun artillery mount, which is primarily used to provide air defense of the ship, are standard equipment. The maximum rate of fire of the installation reaches 1000 rounds per minute in automatic fire mode, while the ammunition of the installation of 252 shells is estimated to be enough to destroy 10 anti-ship missiles.

The composition of the artillery weapons of the Mexican frigate "Reformador" project SIGMA 10514 is different. The frigate’s main caliber is the 57-mm BAE Systems Bofors Mk 3 universal artillery mount. The rate of fire is up to 220 rounds per minute, the range of conventional shells is up to 13 m. Also on the ship is a 800-mm automatic gun BAE Systems Mk25 Mod 38 and six large-caliber 3 mm M12,7 machine guns. 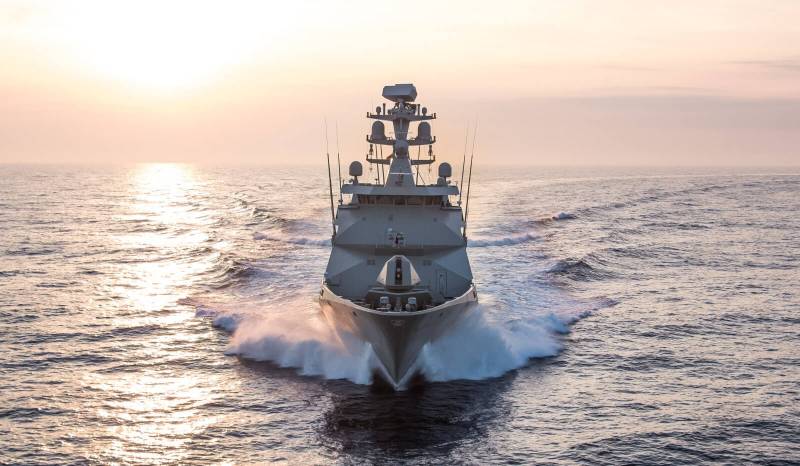 Sea trials of the frigate Reformador for the Navy of Mexico
Torpedo armament of frigates is represented by two 324-mm three-tube torpedo tubes. On the Indonesian frigates, torpedoes manufactured by EuroTorp are used, on the Mexican, the American anti-submarine torpedoes Raytheon Mk 54 Mod 0. Also, the ships have an indoor hangar for placing on board one helicopter weighing up to 10 tons. It is possible to use Eurocopter AS565 Panther or Sikorsky MH-60R Seahawk helicopters. Helicopters can be used in anti-submarine or anti-ship version, which also allows to improve the combat capabilities of the ship.

Currently, the Damen Group is one of the flagships of the Dutch industry. The company specializes primarily in shipbuilding, both military and civilian. Damen Shipyards Group is an international company doing business in 120 countries and has 50 shipyards, related companies and repair shops around the world. In addition, the company is assembling ships at partner shipyards. In total, the Damen Shipyards Group supplies approximately 150 new ships to its customers each year.

The light frigate SIGMA 10514 is actively participating in international tenders; countries that are not ready to spend huge sums of money on the fleet but are ready to have several modern ships in the Navy that can be effectively used as patrol vessels show interest in the ship and full combat units. Currently, the main operator of the ships of this project is the Navy of Indonesia. The Indonesian fleet is armed with 4 SIGMA 9113 project corvettes and 2 light SIGMA 10514 frigates. The Moroccan Navy has two light SIGMA 9813 frigates and one SIGMA 10513. The Mexican fleet has already received another SIGMA 10514 frigate. 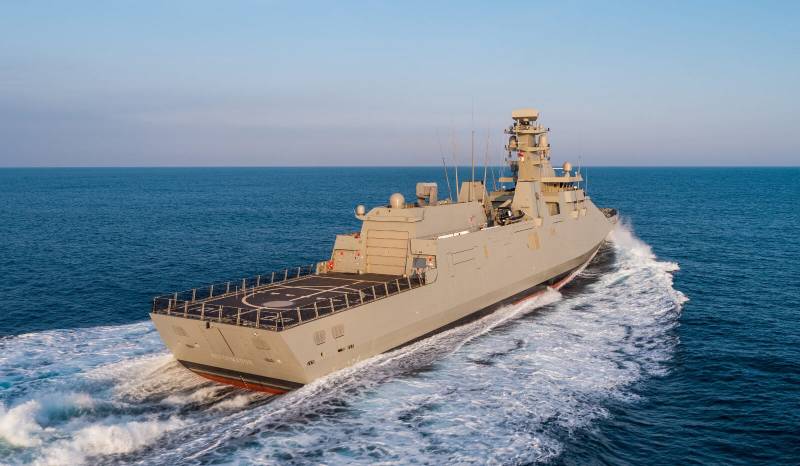 Sea trials of frigate Reformador project SIGMA 10514 for the Navy of Mexico
It is known that Vietnam has shown interest in ships of this type since 2013. The Vietnamese military initially considered buying the SIGMA 9814 frigates, but the deal was canceled. After that, their interest concentrated on the updated SIGMA 10514 project. At present, the most modern ships of the Vietnamese Navy are project 11661E patrol missile ships purchased in Russia. Currently, the parties are negotiating the supply of two more such corvettes, the issue of the composition and quantity of weapons and the power plant is being resolved. The problem is that the engines for the ships previously delivered to Vietnam were supplied by the Ukrainian manufacturer Zorya-Mashproekt.

If Moscow and Hanoi cannot agree among themselves on the supply of two ships of the Gepard-3.9 project (11661E), which is unlikely, given that the Vietnamese Navy already operates four ships of this type and have a well-established cooperation scheme, Vietnam may contact at the service of the Dutch company Damen. At the same time, it is likely that Vietnam will order the light frigates SIGMA 10514 even if two new corvettes are acquired from Russia. Ships have comparable technical characteristics and combat capabilities, while Dutch vessels are distinguished by a large displacement.

We are in Yandex Zen
Big ship of a small fleet. Landing ship Damen LST 100 for the Navy of Nigeria
Patrol ship Damen Stan Patrol 6211
9 comments
Information
Dear reader, to leave comments on the publication, you must to register.