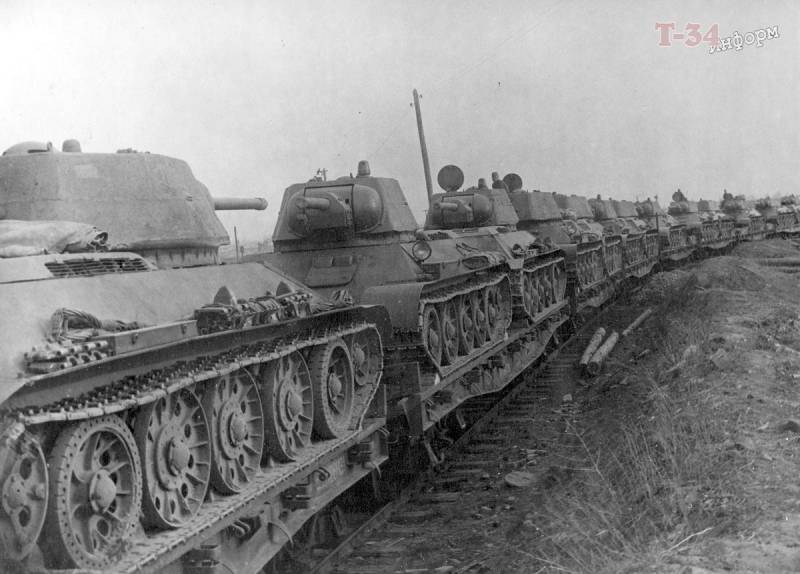 The key role in the appearance of protivosnaryadnoy armor in the Soviet tanks played by the Central Research Institute of Structural Materials, or Central Research Institute-48 “Armored Institute”. At a time when the production of tanks was forced to transfer to the Urals and the tank crisis of 1941-1942 broke out, it was the experts of the Armored Institute that coordinated efforts to resolve it. Consider history the emergence of this outstanding institution.

Andrey Zavyalov, one of the main creators of the legendary T-48 tank armor, became the ideological inspirer of the appearance of TsNII-34 on the basis of the Izhora Central Armored Laboratory. The young engineer began his career back in 1930 at the All-Union Scientific Research Institute of Metals, and two years later he was appointed head of the Central Plant Laboratory of the Izhora Plant. 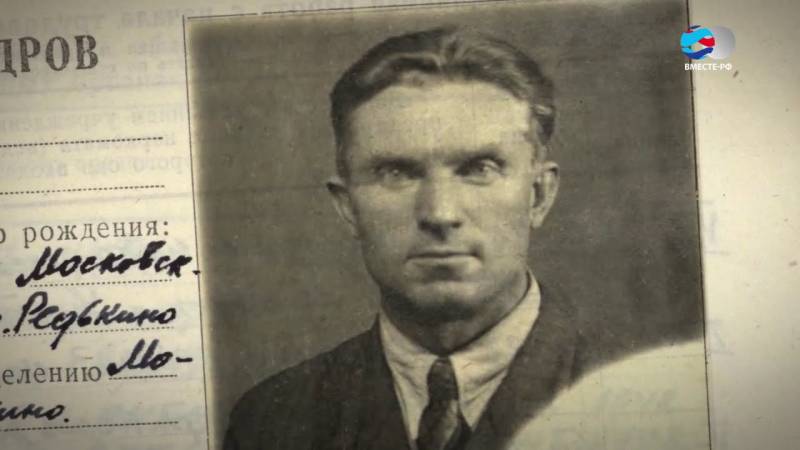 Andrey Sergeevich Zavyalov. Source: youtube.com
It was here that Zavyalov came up with the largely revolutionary idea of ​​equipping tanks with ballistic armor, which was strengthened after testing the T-26 armor with a 37-mm cannon firing. It turned out that the light tank is not pierced right through by the most powerful shells. Then the light tank was made of chromium-silicon-manganese steel grade PI 15 mm thickness. This, incidentally, was bypassing the main technology, requiring 10- and 13-mm cemented armor, which, unfortunately, they could not do with quality either in Mariupol or at the Izhora plant. As a result, the T-26 was heavily loaded by 800 kilograms, and even did not hold small-caliber shells - this was largely due to the high proportion of marriage (up to 50%) in tank corps. Zavyalov sounded the alarm in 1935 (recall that he was one of the first in the world with such an initiative), but in the end he was almost dismissed as a "troublemaker." The Council of Labor and Defense, held in May 1936, helped Zavyalov convey his idea to Zhdanov and Stalin. As a result, the Main Directorate for the production of armor appeared, which was transferred to the Izhora and Mariupol factories, and their laboratories were renamed to armor. You should not think that Andrey Zavyalov only took care of tanks in this way - in the educated laboratories, they worked, among other things, on booking destroyers and battleships, and later on IL-2 attack aircraft. 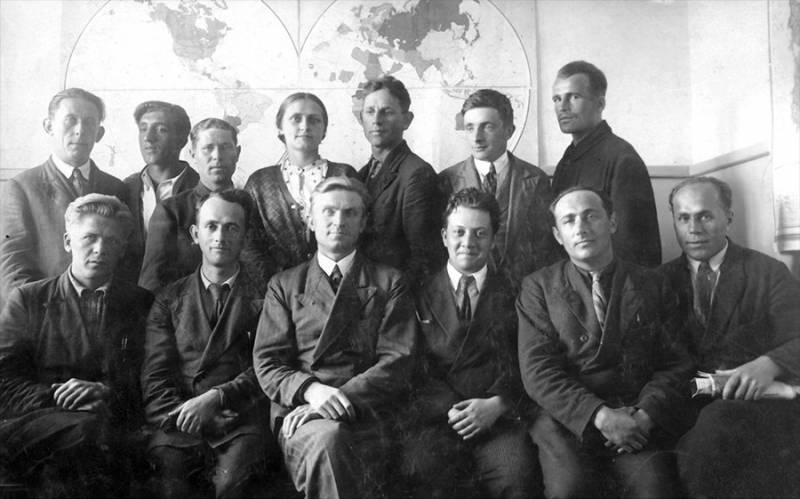 The Central Research Institute-48 team in the pre-war period (1938), in the center of A.S. Zavyalov is the first director of the institute. Source: Crism-prometey.ru 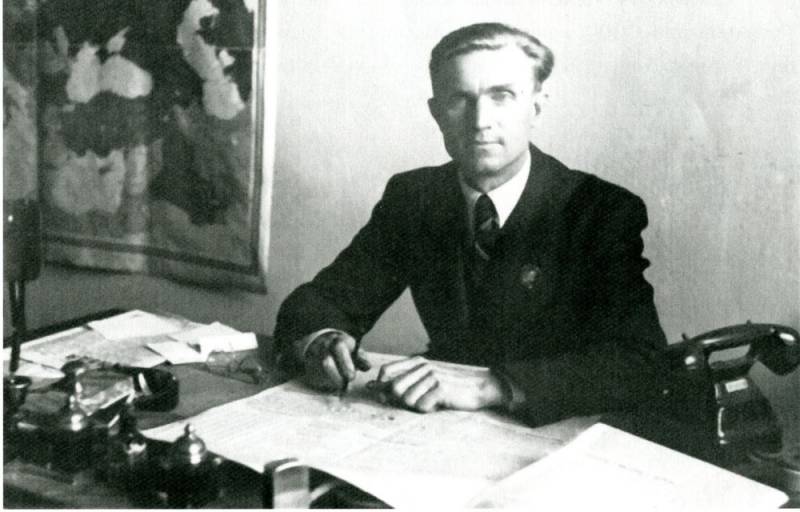 Andrey Sergeevich Zavyalov. Source: Crism-prometey.ru
Since 1938, when the Central Research Institute-48 was formed under the leadership of A.S. Zavyalov, the institute was closely engaged in the development of new types of armored steel for medium and heavy tanks. Steel was cooked in 10-30-ton electric furnaces and 30-40-ton open-hearth furnaces with exact observance of all the nuances of armor production. The highest technological discipline required clean materials and containers, as well as the precise dosing of alloying materials: manganese, chromium, nickel, silicon and molybdenum. One of the first brands of homogeneous armor at the Armor Institute was 2P steel, designed for sections of the hull not subject to high impact loads. However, the true glory of TsNII-48 was brought by the 8C armor, which is distinguished by high hardness and intended for the manufacture of rolled and cast armor parts. That 8C will become a little later the basis of the armor power of medium tanks T-34.

The scale of the research work at the Armored Institute is evidenced by the fact that more than 900 armored plates of various composition and thickness were shot during the search for the optimal recipe. At first glance, the new solid armor had only pluses - it was perfectly welded, confidently held the majority of anti-tank shells with a caliber of up to 50 mm and in terms of its qualities surpassed its German counterparts. However, 8C showed such remarkable properties only with strict adherence to the production technological cycle, which was possible only at the Izhora plant and in Mariupol. So, if in a high-hardness armor the carbon content is increased to 0,36%, then the defect in the cracks in the details increased to 90%! How cracks in the hulls became the real scourge of T-34 medium tanks in the first half of the war was described in the article “Cracks in the armor. Defective T-34 for the front ". 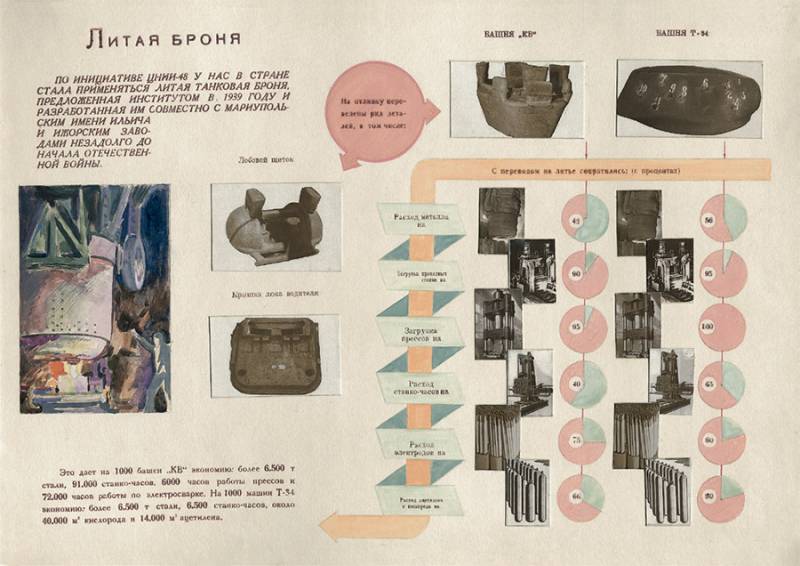 Source: Crism-prometey.ru
In fairness, it should be noted that the first medium tanks with cracks appeared in the Red Army not during the war, but in 1940 on the T-34 of the first series, the armored corps of which were made with violations. At the same time, it is important to know that KV heavy tanks did not suffer from such an ailment due to the different composition of the armor. The thing is in the theoretical calculations and practical experiments of the Central Research Institute-48 of the late 30s, during which it was revealed the susceptibility of 8C with armor-piercing ammunition with a caliber of more than 75 mm. And here, in all its glory, the negative sides of high hardness alloys were manifested - they did not just break through, but split into fragments of various sizes. A simple increase in thickness did not bring much effect - the compression wave even without breaking through caused a very dangerous fragmentation field inside the tank. Therefore, for HF, the “Armor Institute” welded a homogeneous armor plate of medium hardness, capable of withstanding shells with a caliber of more than 75 mm. But here there were some nuances. It turned out that homogeneous armor is worse than multilayer armor with sharp-headed projectiles, which can be fraught with a tank defeat along the normal. A couple of cases were even recorded during the Soviet-Finnish war, when the harmless 37-mm spear shells hit the HF very successfully and entered the armor by 68 mm, that is, they nearly pierced the tank. Then the alarm began to be sounded by the head of the special technical bureau N. A. Rudakov, proposing to introduce an expensive procedure for cementing armor, but things did not go further than experiments at the Izhora plant. In the course of experimental work, it turned out that the advantage of cemented armor over a homogeneous one is manifested only with a thickness of more than 150 mm, which, of course, was not entirely possible to implement in the series. Actually, this determined the appearance of medium and heavy tanks of the Soviet Union, welded from homogeneous armor of high and medium hardness, perfectly opposing blunt-headed shells, but often grazing in front of pointed-headed shells that fit the target at angles close to normal. In other cases, the rational corners of the corps were an excellent panacea for most German artillery (at least in the initial period of the war). Returning to the problem of crack formation in the T-34 hulls, it is worth saying that they appeared on the HF, but were not critical and did not reduce the projectile resistance.

"Armor Institute" in the war

Already in July 48, specialists of the Central Research Institute-1941 worked on the reconstruction of the 14 largest enterprises in the Soviet Union under the new military needs. Among them are Magnitogorsk, Kuznetsk, Novo-Tagil and Chusovskoy metallurgical plants, as well as the famous Uralmash and Gorky "Red Sormovo". Among the many works of the Armored Institute, only by the beginning of 1942 the following projects were put forward for the Stalin Prize (as they say now): “Development and implementation of the production of cast KV towers”, “Development of a substitute steel grade and the process of production of armored steel for heavy KV tanks in the main open-hearth furnaces of large capacity "," Development and implementation of the process of welding heavy tanks ", as well as" A new type of protivosnaryadnaya tank armor of high hardness with a thickness of 20, 30, 35, 40, 45, 50 and 60 mm made of silicon chromo-n ikel-manganese-molybdenum steel grade M3-2. " In February 1942, at the Verkhne-Isetsky Plant, TsNII-48 specialists developed and introduced the technology of casting towers for T-60 light tanks, which significantly reduced energy consumption and resource. 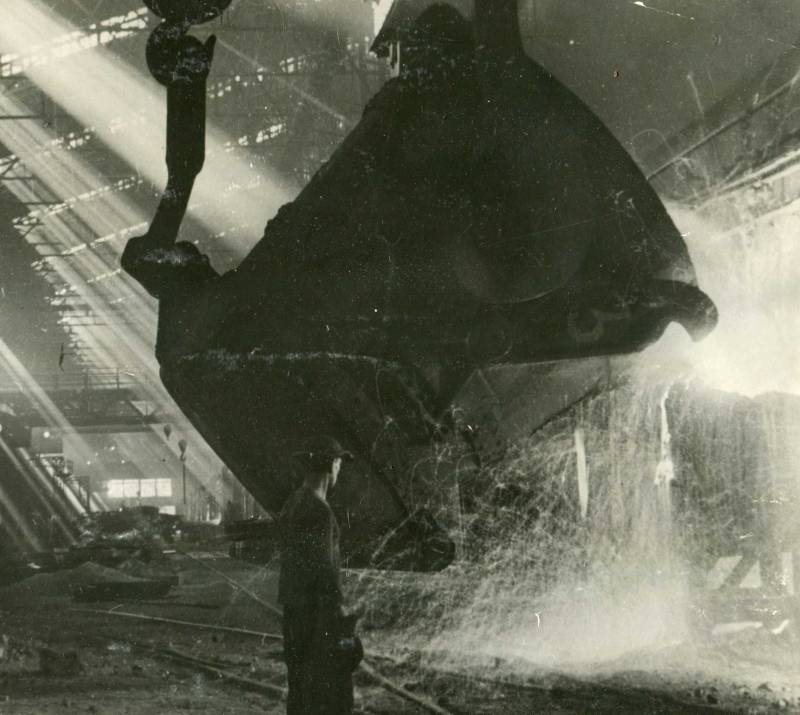 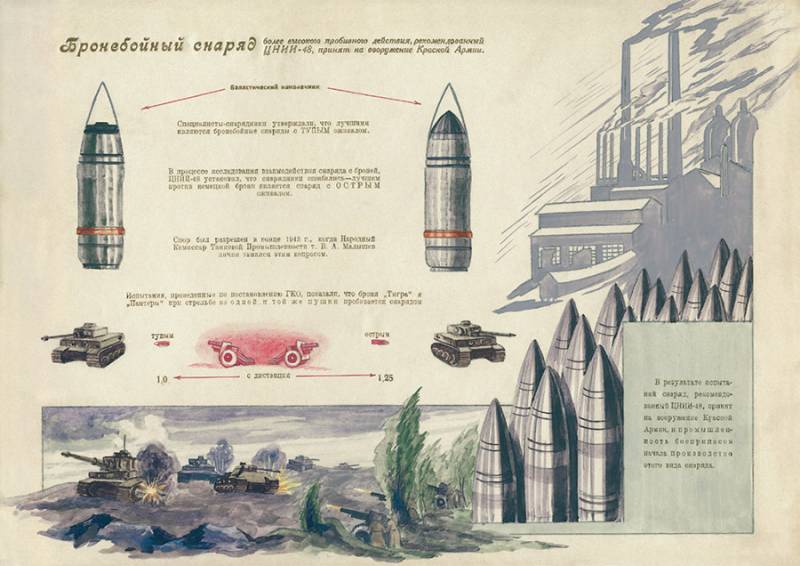 The technology for the production of shells was also in the field of interest of the Armored Institute. Source: Crism-prometey.ru
In general, the situation with the Magnitogorsk Iron and Steel Works was close to disaster - at the beginning of the war, an order was issued to organize the production of armored steels for tanks. And before that, the company produced exclusively “peaceful” steel, there were no specific “acidic” open-hearth furnaces in the workshops, and, naturally, there was not a single specialist in casting such complex compositions. As a result, the TsNII-48 experts, who were the first in the world to invent smelting armor in the main furnaces, decided the question - read above the full name of the corresponding design work. This allowed two months ahead of schedule to carry out the first issue of armor from 150-, 185- and 300-ton open-hearth furnaces. And on July 28, 1941 it was also the first time in the world that it was possible to roll an armor plate on civil blooming not intended for this purpose. As a result, every second Soviet tank was made of Magnitogorsk armor. And such a scenario was repeated with varying degrees of success at other enterprises of the ferrous metallurgy of the Soviet Union. But such swiftness, of course, has a downside.

In the book “Tank Industry of the USSR during World War II,” candidate of historical sciences Nikita Melnikov writes that, according to the standards, until 1941 mm the T-45 side armor had to withstand the direct hit of a 34 mm anti-tank shell from a distance of 45 meters. But already in 350, at the height of the emergency production of tanks at the Ural enterprises, the standard for armor resistance was seriously reduced - just such ammunition should not have pierced the side of the tank from 1942 meters. 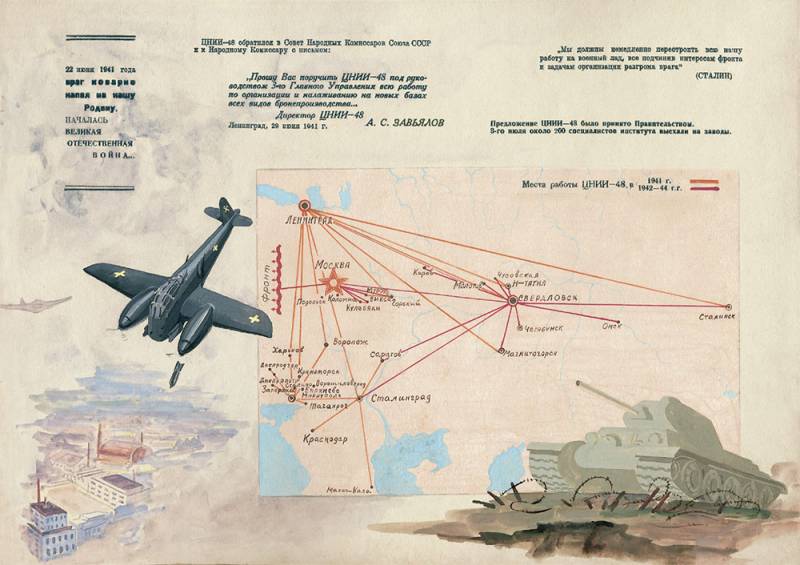 The spectrum of the Central Research Institute-48 during the war. Source: Crism-prometey.ru
The Armored Institute can be ranked with an indisputable merit by introducing the production technology of cast towers of KV tanks by the summer of 1942. This innovation, which has become largely compelled, among other things, reduced the volume of mechanical processing of towers by 40%, reduced the consumption of scarce rolled armor by 20%, and reduced press-bending work at tank plants by 50%. And the use of casting in the manufacture of T-34 towers (also using the TsNII-48 technology) made it possible to get rid of the notorious cracks at least on this part of the tank.

In addition to purely technological work at tank production facilities, TsNII-48 specialists were also engaged in statistical research on the battlefields. In the future, this became the basis for the development of tactics for using domestic armored vehicles and recommendations for the destruction of enemy ones. 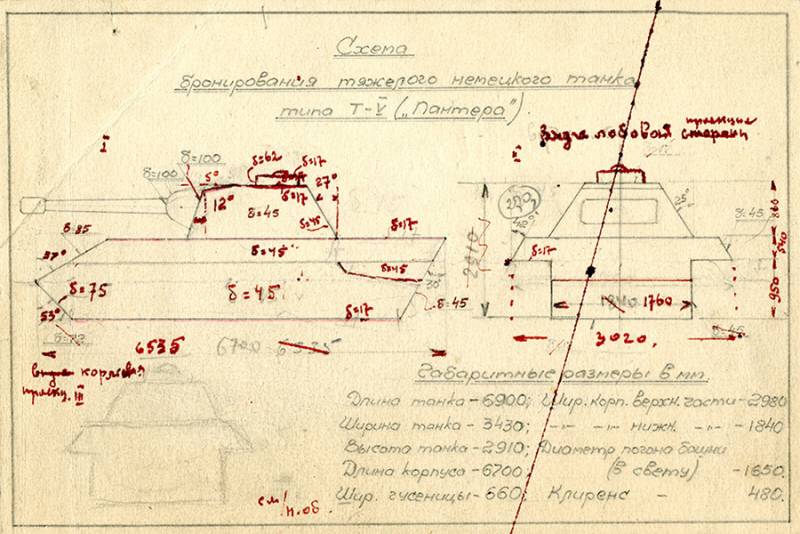 One of the products of the Central Research Institute-48. Source: Crism-prometey.ru
Given the shortage of alloying additives to the armor in 1943, a new brand of armor, 48L, was created at the Central Research Institute-183 together with the Ural Tank Plant No. 68. It was adopted as an inexpensive substitute for 8C, since for 1000 tanks this alloy saved 21 tons of nickel and 35 tons of ferromanganese.

The Soviet Union emerged victorious from World War II, and the small collective TsNII-48 played a significant role in this, which became a real forge of armor steels for the front, whose work was accompanied by real triumphs and forced failures.

Ctrl Enter
Noticed a mistake Highlight text and press. Ctrl + Enter
We are
Diplomats of the People's Commissariat of Defense: on the eve and during the warMyths of the Great Patriotic. Papier mache helmet
42 comments
Information
Dear reader, to leave comments on the publication, you must to register.