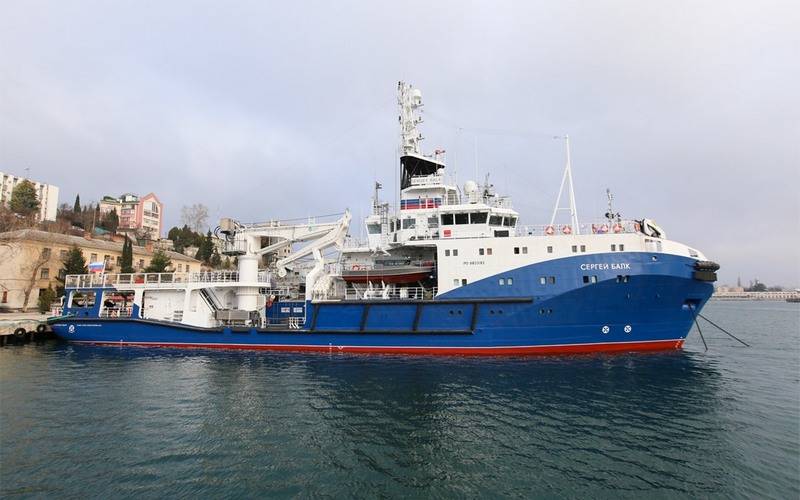 The Black Sea Fleet received a new marine tugboat of project 23470. The ceremony of putting the tugboat "Sergey Balk" into the squad of support vessels fleet was February 21 this year in Sevastopol. This was reported by the press service of the Ministry of Defense.


Sea tug "Sergey Balk" is the lead in a series of five sea tugs of project 23470. Built at the Yaroslavl shipyard according to the contract for two sea tugs for the Ministry of Defense concluded in 2014. Laid down at YaZZ on October 30, 2014 and launched on December 27, 2016. It was supposed to be delivered to the Black Sea Fleet before November 25, 2016, however, the construction of the vessel turned into a long-term construction due to the revision of the project to replace imported components with domestic ones.

The completion took place at the Persey Shipyard in Sevastopol, where it was towed in the middle of summer 2018.

Currently, the second tug of this project, "Andrei Stepanov," is under construction at the Perseus Shipyard.

Three more tug boats of project 23470 are being constructed in Yaroslavl under a modified project with the installation of Russian equipment.

We are in Yandex Zen
In Yaroslavl laid sea tug project 23470
October 24 The 2013 of the year successfully completed a unique operation for loading six tugboats aboard the specialized ship HHL Lagos of the company Hansa Heavy Lift (Germany)
28 comments
Information
Dear reader, to leave comments on the publication, you must to register.