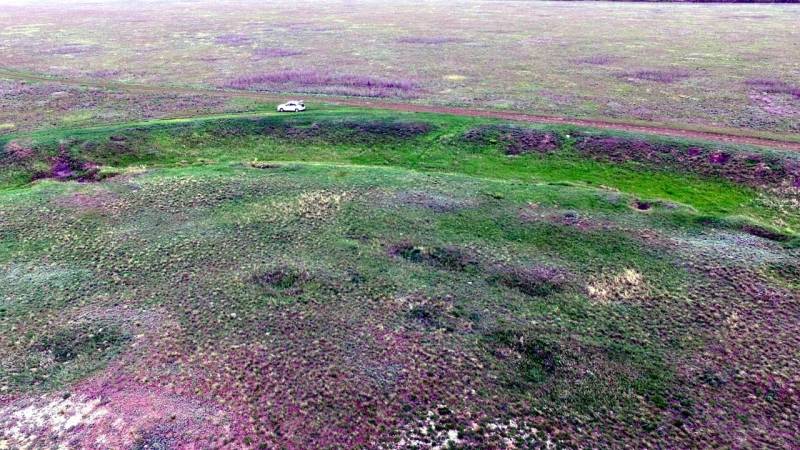 A religious building in the bend of the Don near the village of Trekhostrovskaya Volgograd Region has no analogues in Russia. This is a circle with a diameter of about 200 m, surrounded by a moat and rampart. In the center was equipped with a fire shield with a radius of up to 25 m, with a recess lined with limestone and walls of earthen blocks molded in boxes made of rods. During excavations, it was found that in this huge hearth for decades, and maybe centuries, fire was burned. Logs and branches were constantly brought from floodplain forests and stacked in a huge pile. After drying, the wood was burned through special ignition holes. The furnace was closed with stone debris and clay, a column of smoke was visible for many kilometers, and without access to oxygen charcoal was formed in the pit.


Usually such grandiose temples were a place of worship for important deities and served as the cathedral center of the tribes. There is an opinion that it was built by fire worshipers, Zoroastrians. But here it is necessary to deal with concepts. The same followers of Spitama - Zarathushtra see in the flame the image of their god Ahuramazda. But a huge ashpit in the Tatar settlement near the city of Stavropol - these are traces of worship of domestic spirits. Fire and smoke are so mysterious and unusual that they serve as emanations of the most diverse higher entities. Thus, in the Rig Veda, the flaming Agni wears the epithets of the "house priest of the gods" and the "immortal guest of mortals." Traces of this great tradition appear even in monotheistic religions. Fire for people could represent any otherworldly forces.

There is no consensus on what culture this archaeological site should be attributed to. The data of radiocarbon analysis obtained in various laboratories give a wide scatter of dates: from 15-13 to 7-4 centuries BC. e. From the carriers of the carcass culture to the Scythians. Moreover, in the immediate vicinity found and the settlement of "felling". However, given how many times the soil layers were mixed by “black” diggers, as well as by the locals when mining coal for the furnace, both dates can be correct. We should expand the range of sources that can shed light on this problem.

First, let's look at the classics. Here is what Herodotus wrote about the worship of the Scythians to the god of war:

All of them have Ares shrines in the districts of their regions in this way: they pile up bundles of brushwood, about three stages in length and width, but less in height. A small quadrangular platform was made upstairs, its three sides are steep, on the one hand it has access. Because of the snow and rain, a bunch of brushwood settled, one hundred and fifty carts were brought in every year. An akinak sword was installed upstairs, sacrifices were made, including human ones, and under certain circumstances they set fire to it all.
The description almost exactly matches the results of archaeological excavations of the Triostrovsky temple. Moreover, there is simply no other archaeological site that falls under the description of the great Greek historian in the southern Russian steppes. But one must understand that the exaltation of the god of war in ancient societies occurred rather late, as power was concentrated in the hands of the military aristocracy. It was at this stage that Herodotus found the Scythian society. But the geographer Strabo reported that the Persians built giant altars of wood, which were burned during the sacrifices to the Sun. Bonfires were burned during the summer solstices and the Slavs. Along the way, we note that modern research localizes the emergence of Indo-Iranian languages ​​just in the northern Black Sea region.

In the Bronze Age, representatives of the carcass culture lived in these territories. Genetics attribute them to the haplogroup R1a, to the same one that prevails among the Indian and Iranian Aryans. The Scythians who appeared here later also added R1b, which implies a partial change of ethnos. But spiritual traditions are rarely interrupted with the disappearance of their carriers, in one form or another they are passed on to subsequent generations. Probably, the Three-Island Sanctuary was originally created by the ancestors of the Aryans who worshiped the solar deity. This is evidenced by the circular filling of the sanctuary - in the shape of the sun. Later, many of them migrated to the south, on the territory of modern India and Iran. Those remaining together with the owners of R1b took part in the formation of a new ethnos, future Scythians. But the place of worship has been preserved. Only the "owner" of the temple was replaced, now they brought gifts to the warlike deity.

Ctrl Enter
Noticed a mistake Highlight text and press. Ctrl + Enter
We are
Chernobyl notebook. Part of 3Father told
12 comments
Information
Dear reader, to leave comments on the publication, you must to register.