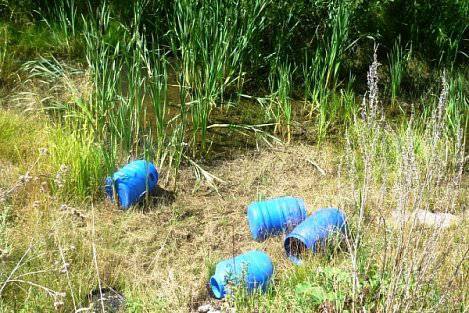 The demographic crisis, the need to overcome it through raising the birth rate is one of the most discussed topics in modern Russian society. Experts say that a radical increase in the birth rate is necessary for victory over the demographic crisis. Not just the barely emerging statistical trend, namely, the radical shift towards the excess of the number of births over the number of deaths, in fact, the victory of life over the death hanging over the country! No more, no less. We need new people, new brains, new hands and new bayonets. And they need many times more than now. Without this, Russia simply cannot objectively survive.

RIA NEWS: “Residents of the Nevyansky District of the Sverdlovsk Region on Sunday found four plastic barrels with human embryos treated with formaldehyde in a forest ravine, Valery Gorelykh, head of the press service of the regional Interior Ministry of Russia, told RIA Novosti on Monday.

The barrels were found about five kilometers from the Ekaterinburg-Nizhny Tagil highway. Embryos were tagged.
“According to one of the versions, the numbers of the chambers and the names of the mothers can be indicated on the tags,” Gorelykh noted.

An investigative team composed of officers from the Nevyansk ATS, a forensic expert and representatives of the territorial investigation department of the SUSC of Russia in the Sverdlovsk Region, left for the scene.

"This morning, at the direction of the chief of the Interior Ministry Mikhail Borodin, a repeated thorough inspection of the ravine will be held - the police arrived there almost after dark. Besides, experienced medical workers will be involved ... the age of the embryos will be brought in," the police official said glavka.

He added that when falling into a ravine from the barrels lids jumped off, and part of the contents of the containers was on the ground.

“Mikhail Borodin took the investigation of this incident under his personal control. On his instructions, the police began to check all nearby medical facilities, from where they could take this terrible cargo,” Gorelykh said.

Practiced various versions of what happened.

“Following the results of the check, the actions of those who threw out the embryos into the forest will be given a legal assessment. A decision will also be made to initiate a criminal case,” Gorelykh said.

According to the administration of the governor of the Sverdlovsk region, the head of the region, Yevgeny Kuyvashev, commissioned an official check on this fact in a short time.

“Yevgeny Kuyvashev noted that organizational conclusions should be made on the basis of the audit,” the message reads. ”

Barrel! A whole barrel of lives! Biological waste ... Not born engineers, poets, generals, teachers, doctors, so needed by the country, just people !!! Chikatilo, as they say, nervously smokes on the sidelines. Just hair on end! I would like to look into the eyes of the person who put them there, in this barrel, folded. However, God will judge him ...

Let us leave the emotions and take a look at the truth, casting aside the moral and religious side of the issue, without which, however, the problem under discussion will never be solved. The mass character of abortions is evidence of the deepest moral degradation of society, its cruel spiritual crisis. And the material side (no money, there are already children who need to be fed) has nothing to do with it.

So, it is time to declare that if we need a Radical shift in demographics towards an increase in the birth rate, then it is time to prohibit abortion by law, equating them to murder, that is, calling things by their proper names. Abortion for medical reasons is a difficult thing, in this issue, let the doctors understand the conscience and faith. However, abortion “at will”, in the case when a healthy woman, by prior agreement with an accomplice doctor, consciously goes for the murder of a healthy child, motivating her desire with “material”, “personal” and other reasons-excuses, should be interpreted solely as murder, and possibly as a betrayal of the motherland with all the consequences. So RADICAL, because it is about the survival of the nation.