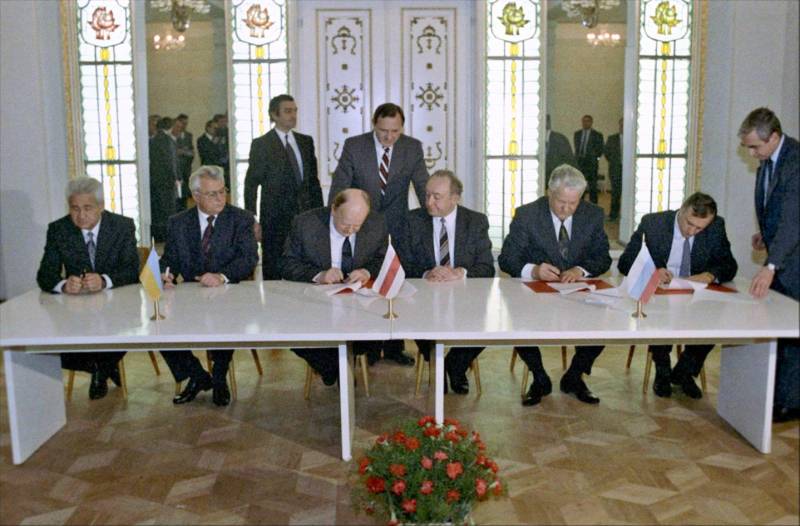 A little over a year remains until the 30th anniversary of the creation of such an interstate entity as the Commonwealth of Independent States. And it’s not entirely clear how this date is to be celebrated: toasting for her health or still drink ... without clinking glasses?


The three decades mentioned for the CIS, alas, have passed, so to say, neither shakily nor roll. And so much so that some have openly expressed doubts that this organization generally exists other than de jure. Why is that?

First of all, we must understand and remember that the CIS was not created simply on the bones of the USSR. The birth of the Commonwealth of Independent States, in fact, was the death of the Union of Soviet Socialist Republics, recorded during the treacherous gathering in Viskuly. All the rest (the Ashgabat forum of Asian presidents, the Alma-Ata Declaration, from which the establishment of the Commonwealth is counted, etc.) were already attempts to maintain at least the appearance of unity of yesterday's fraternal republics (and even then not all) and save at least something. That “at least something” happened ... A hopeless structure?

Initially, this community was seen by its founders in no case as a state or even as a supranational entity. And then what? God knows him. However, with such a completely incomprehensible and non-binding status of the organization, it was obviously destined to become something like a “club of interests”, a kind of platform within which it would be possible to “talk for life”. It is not surprising that, for the most part, initially not real areas of cooperation were included in the CIS charter, but general declarations that sound as beautiful as they are unrealizable in practice. Well, it’s like “achieving complete and universal disarmament” and ensuring the broadest “rights and freedoms” in every way.

The saddest thing is that even the clause on the “peaceful resolution of conflicts and disputes” of the member countries of the Union turned out to be an equally beautiful dream - given that in its ranks the organization initially united Armenia and Azerbaijan, Russia, Georgia and Ukraine ... In general saying, only the Baltic republics refused to participate in the CIS right away and flatly, even then aiming for Europe, as they say, even with a carcass, even with a scarecrow. The rest of the post-Soviet ones in the first years after the collapse of the common house, the USSR, were still thinking of some more or less close coexistence. Today, the CIS is, by and large, 8 full members: Russia, Belarus, Armenia, Azerbaijan, Kazakhstan, Kyrgyzstan, Uzbekistan, Tajikistan. And also Turkmenistan in the status of an associate member and Moldova, torn between the CIS and European integration and not determined at all: to her smart or still beautiful ...

Ukraine, the charter of the Commonwealth did not initially sign, for some time revolved around him in the role of an “observer” (while remaining one of the founding states), but in 2014 it sharply gathered up “with things out”. True, Kiev did not submit the official procedure in the form of a written application of intentions to leave the organization, so all Ukrainian presidents, up to the present, are sent invitations to Commonwealth events, which, of course, are “proudly” ignored. Georgia slammed the door loudly back in 2008 and embarked on an endless campaign towards the EU and NATO.

The most valuable developments of the CIS, without a doubt, remain the Free Trade Zone created within its framework, with which, however, they transported for as long as 20 years - until 2011, and the Customs Union, which allowed the Commonwealth to create a common market called the Common Economic Space. It does not include all CIS countries, but only Russia, Belarus, Kazakhstan, Armenia and Kyrgyzstan. However, there are serious reasons for hopes that the CES will still grow in new countries, at least at the expense of the CIS countries. Certain successes have been achieved in combining the efforts of the Commonwealth law enforcement agencies in the fight against organized crime and drug trafficking. But in military cooperation, despite the plans voiced at first, the achievements are much more modest.

The CIS did not become either a continuation or a new incarnation of the USSR. And he couldn’t become anything like that, by and large ... Perhaps in our time, when the geopolitical situation forces the countries to unite, at least to successfully confront the alliances of other states, striving for a new redivision of the world, the Commonwealth will open a second wind - the union. However, due to how much the former republics of the USSR over the past three decades have diverged in their development, the vectors of domestic and foreign policy, rather, it will be something completely new, albeit based on the best practices of the CIS.

We are in Yandex Zen
Situational analysis of the death of the MH17 flight (Malaysian Boeing 777), made on the basis of engineering analysis from 15.08.2014
Results of the week. "God forbid to see Russian revolt, senseless and merciless!"
50 comments
Information
Dear reader, to leave comments on the publication, you must to register.