Warships. Who shot how? 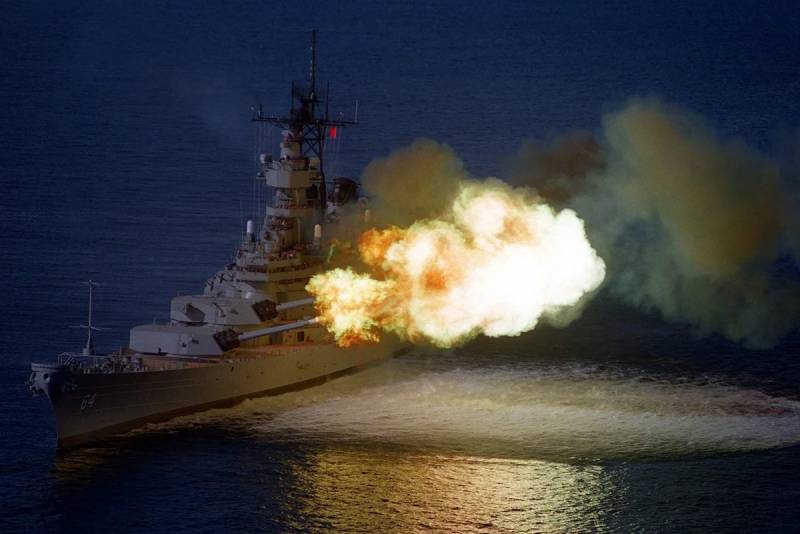 I must say right away that it will be about not so distant times, but about those times when the radar was a maritime maritime poison, and, rather, an additional gadget for babahalshchikov from large and not very calibers. That is, about the times of World War II.


The fact that in that war the plane showed itself in all its glory and completely changed the tactics of battle on land, on water, yes. Undoubtedly. However, at sea until the very end of the war, ships were regularly thrown at each other by steel and cast-iron ingots of various weights and fillings, and, importantly, they fell.

Yes, torpedoes are no less interesting component of that time, but we will talk about them later.

Now, when electronic maps, with an accuracy of 1-2 meters, radars detect anything, computers control the firing, launching missiles and torpedoes, more and more you are wondering: how did they (sailors) do without this before?

After all, they did the same, and how! Glories, Bismarck, Hood, Scharnhorst - a list of ships sunk without significant participation aviationcan go on for quite some time. Drowned, and drowned quite successfully. 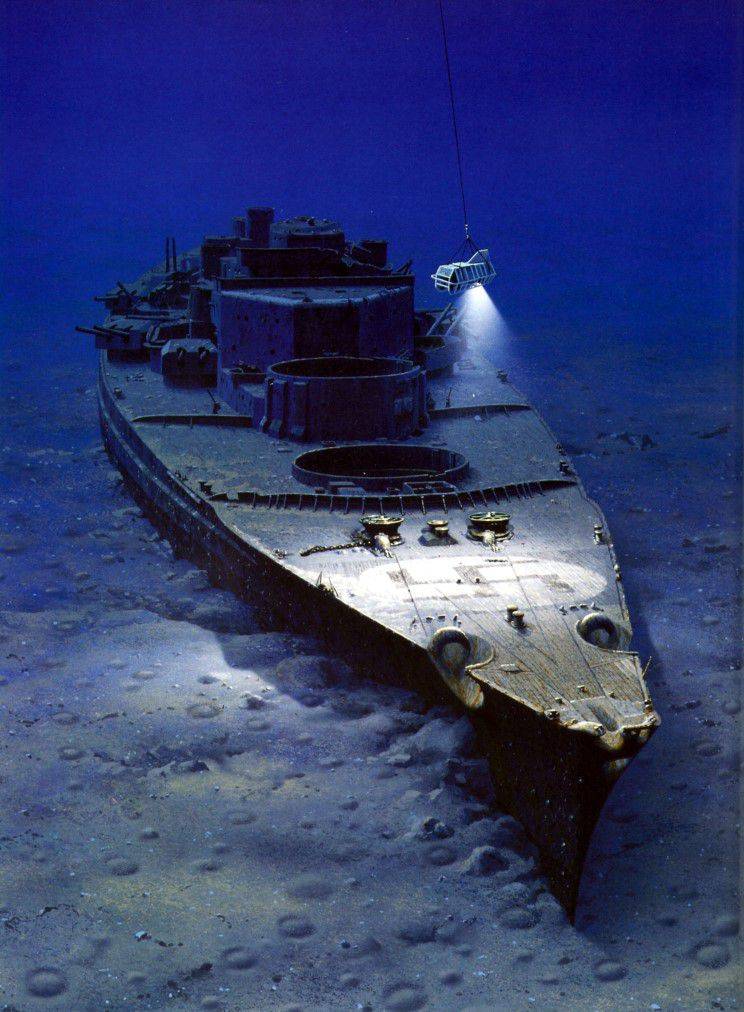 Moreover, in stories there was a case when one hit of a shell decided the outcome of the whole battle. This is when the Worspite guys hit the Giulio Cesare from 13 miles. And this, excuse me, is 24 kilometers. For a shell - the distance with a capital letter. 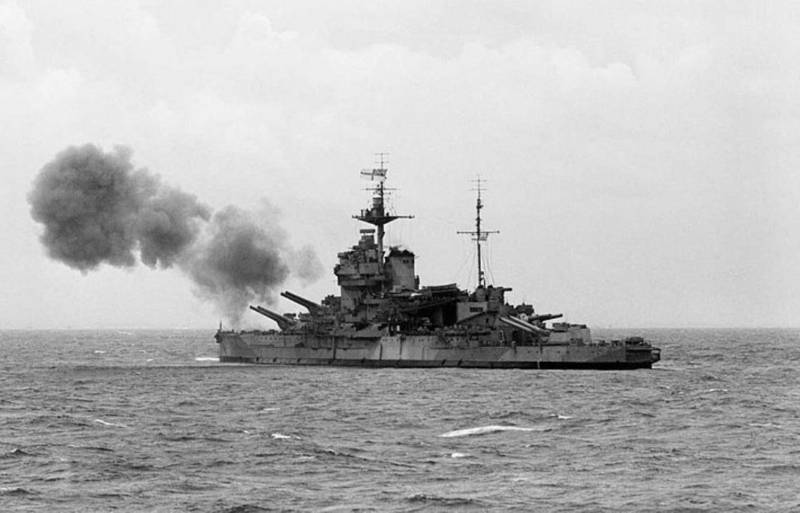 Battleship "Warspite"
Of course, to hit a moving target at such a distance with an artillery shell - it looks more like fiction in half with crazy luck. But the fact: they could and fell.

One of the regular readers asked an interesting question: why are the naval battles so well-painted and described, but is it not so detailed and luxurious with the land battles?

As you know, winners often write the annals of battle. The air battle in general is very fleeting, sometimes you read the participant’s memories and understand that everything was so concentrated during the battle, that then you can turn five minutes into battle into an hour of presentation. And this is normal.

Combined arms combat is also a peculiar thing, it is like a mosaic, made up of pieces. Somewhere infantry, somewhere the same artillery (one at the front line, another in the rear), Tanks, Self-propelled guns, each has its own battle.

But the naval battle, as it were, is more leisurely in itself, and there was someone to describe, since there were plenty of eyes at the time, looking at the overall picture of the battle.

But what's the most interesting thing? Indeed, the opportunity to consider naval combat in all its stages and not very hastily. Even the World War II marine consumables - the destroyer - lived much longer in battle than the same tank or plane.

What is difficult to sink a ship? 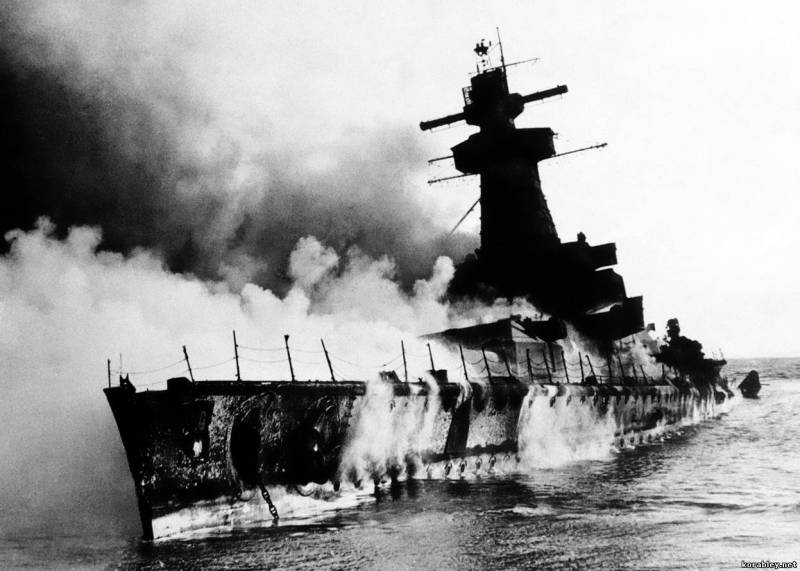 From the point of view of physics, nothing. You just need to make holes in the hull so that water enters them, and the ship loses buoyancy. Or set it on fire, preferably so that the fire gets to the fuel tanks or gunpowder cellars.

The main thing is to make sure that the shell or torpedo hits the ship’s hull. And here complete miracles begin. Math.

Usually in films, the process of firing a shot is shown from its end. That is, from the moment the projectile and projectile charge are fed into the tower and the “Fire!” Command In fact, the work begins long before this sweet sight of the moment.

And not in the command cabin, but in a completely different place.

Try to hit the enemy?

Then our path does not lie down to the ammunition, but to the very top. Moreover, it will be very high on any ship. KDP, command rangefinder post. The workplace of the strongest stomachs on the ship, because you need to aim the guns with any excitement, and where the KDP is located, can be seen in the photo. 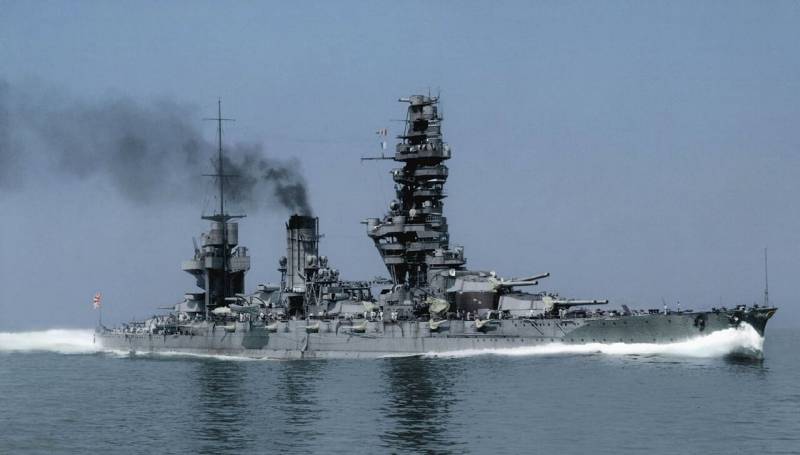 The battleship Fuso. It is worth evaluating the height at which the KDP was located
The command and rangefinder post was a large platform, armored, on a rotating pedestal. So it was necessary, because the KDP had to have a review in all directions. Circular that is. It’s very easy to find the KDP in any photo, the horns of the range finder stuck it out. 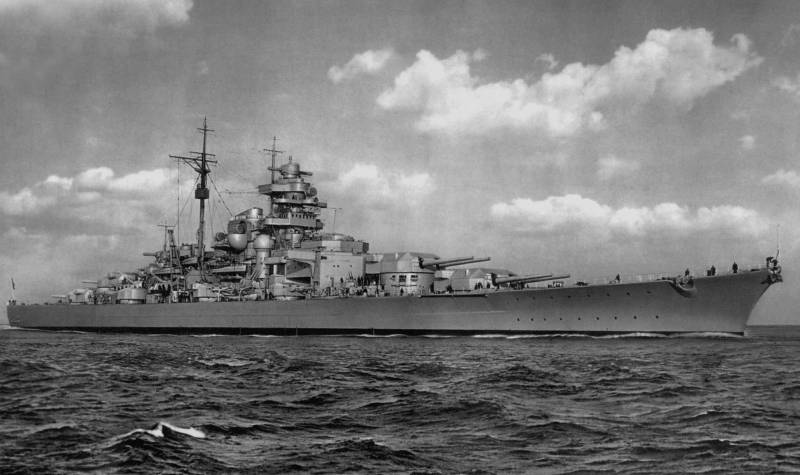 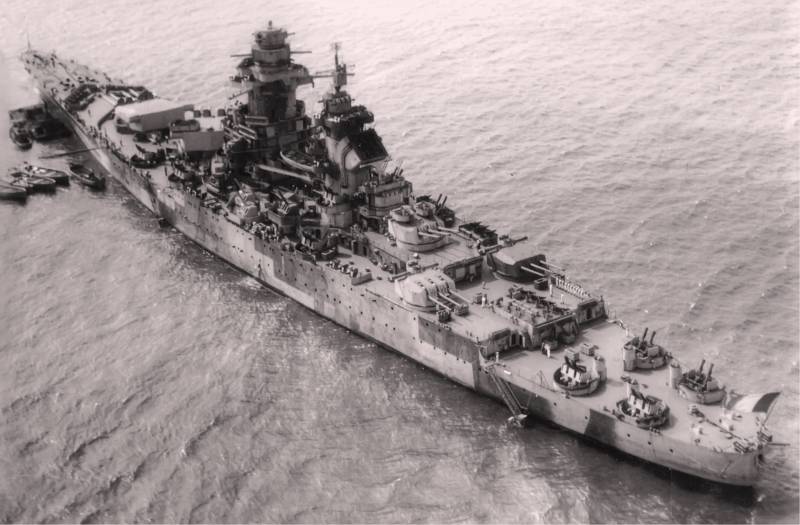 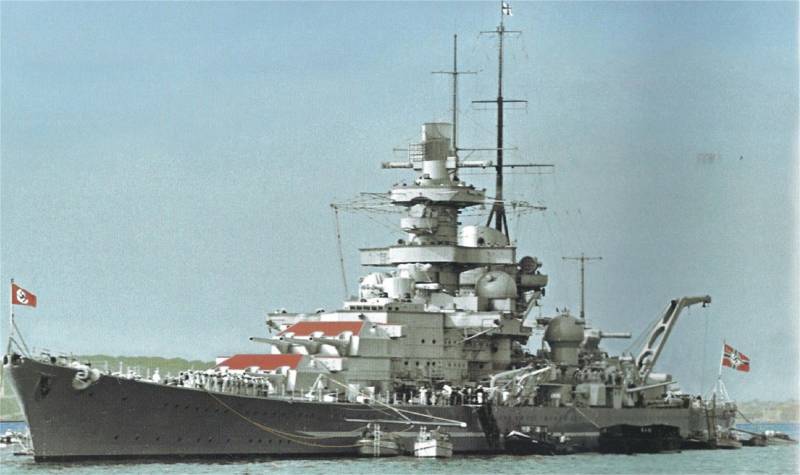 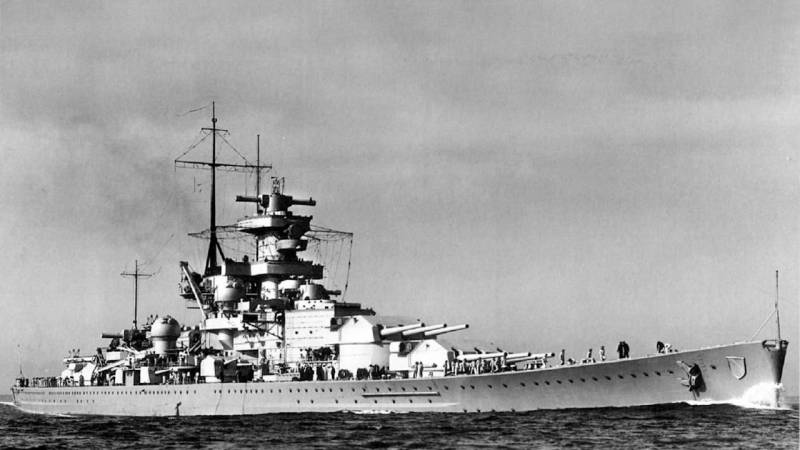 Indeed, I’m sitting high, looking far away. I can imagine how it rocked in the event of an unrest at sea ...

On cruisers and destroyers, everything was exactly the same, of course, on a scale. Only there it rocked and threw more mercilessly than on the battleship. Due to size.

Here in this design rotating around its axis were those who really were the eyes and brains of the ship in terms of shooting. The rest are purely executors of orders.

Who was in the KDP? 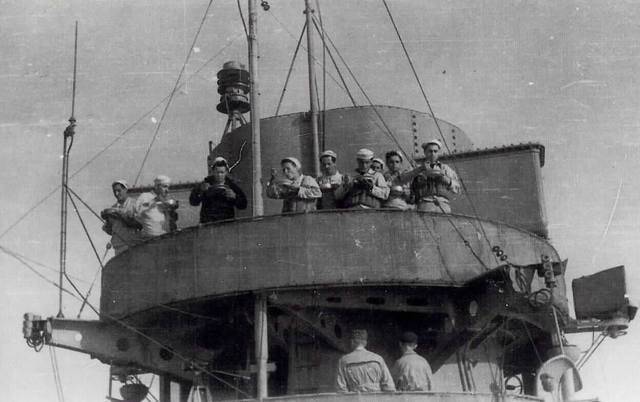 The main man inside was the senior gunner. The position in different countries was called differently, the essence remained the same. Responsible for shooting data.

Senior Observer Officer and Observers. These are those who scanned the horizon with their eyes, searched for targets, received target designation from the same reconnaissance aircraft, submarines, radio interception services, and so on. But this gang worked through the eyes. The observing officer was responsible for accurately determining the parameters of the target's movement.

Rangefinder (rangefinders) plus vertical and horizontal gunners KDP. These people were subordinate to the senior gunner and, in fact, they aimed guns and shot from them.

And to be precise, he pressed the shutter button, giving a volley, a vertical gunner KDP. At the command of a senior gunner.

There, somewhere below, under the armor of the hull, all these gun crews fussed, which they brought, rolled, loaded, turned to the desired angle horizontally and raised the trunks in a vertical plane according to the data transmitted from the KDP. 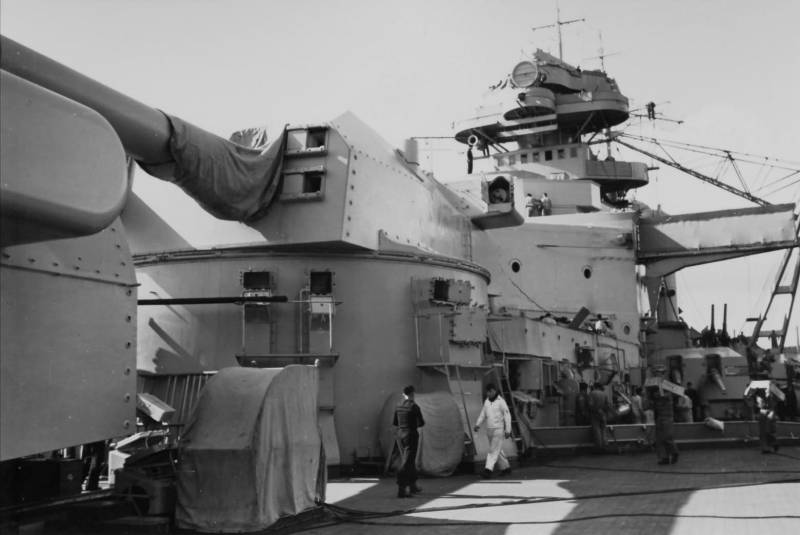 But these guns, sitting in the KDP, were aimed. On large ships (battleships), the KDP usually had a stern double, which in which case could replace the main KDP. Or control the aft towers to remove one additional amendment. But we will talk about the amendments a little later.

Somewhat later, radar operators were added to the KDP when radars appeared. This added accuracy, but introduced an additional adjustment to the battle. The KDP was just a tidbit for the enemy artillerymen, for planting a shell in the bridge (or even in the KDP itself) was very useful.

Here, as an example, we can cite the battle at the North Cape, where just in this way, blinding the Scharnhorst, the British turned it into a floating target and without particularly straining, sunk.

Yes, we are now talking not just about a virtual ship, but about a ship that is equipped with a central aiming system according to the KDP. Before World War II (and during it), each tower usually had its own sights. And theoretically, each tower could independently fire on the enemy.

In theory. Because it was the central aiming system that made it possible to forget about the shortcomings when the calculation of each gun independently determined the elevation angle (vertical aiming) and the lead angle (horizontal aiming). In real combat, tower gunners experienced a lot of problems, because often the target was simply poorly visible. The towers were much lower than the KDP. Spray, smoke, pitching, weather conditions - and as a result, the human factor played, that is, each gunner introduced his personal inaccuracy. Although it was very small, but as a result of volley shells scattered over a large area, instead of covering the target closely.

Because the use of the sight KDP has become, if not a panacea, then a very significant help. At the very least, mistakes made during the tip were much easier to track and correct.

When observers discovered the enemy, the entire KDP turned in that direction. This turn was transmitted by repeaters to the guns that repeated it, and the data also went to the central artillery post.

So, we found the enemy, got the preliminary data and it started ... Well, yes, everyone ran in, went on a thunder, the aiming procedure began.

Everyone, in general, knows that the guns should not be pointed at the enemy’s ship, but at a certain hypothetical point, at which it will be after the time it takes for the shells to fly. And then everything will be beautiful from our point of view and completely disgusting from the point of view of the enemy.

At the Central Artillery Post (DAC) there was a mechanical computer for this, which was called the Admiralty dial for fire control, to which all data from the KDP was transmitted. 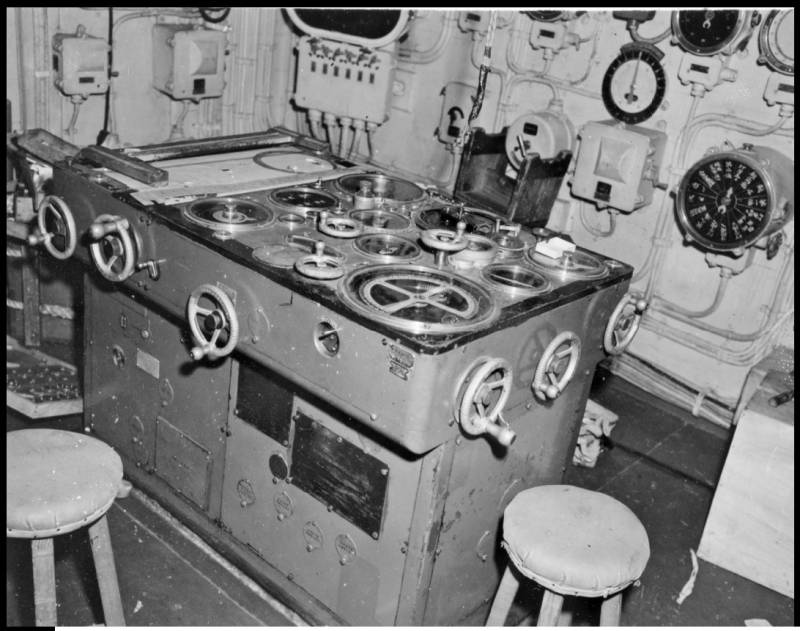 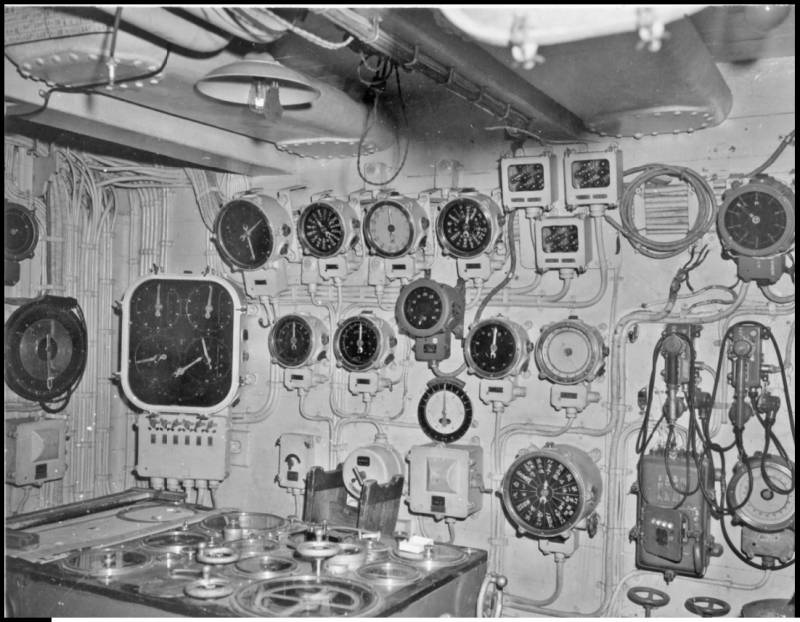 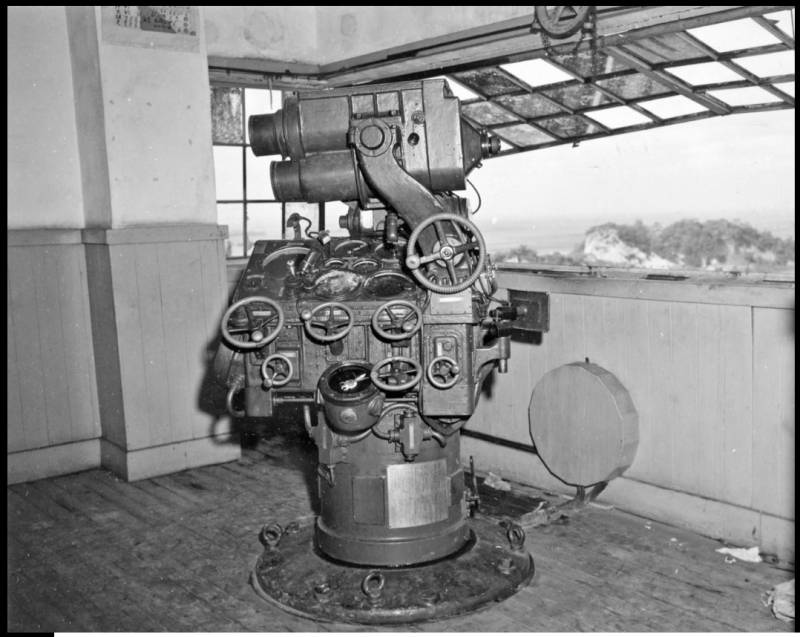 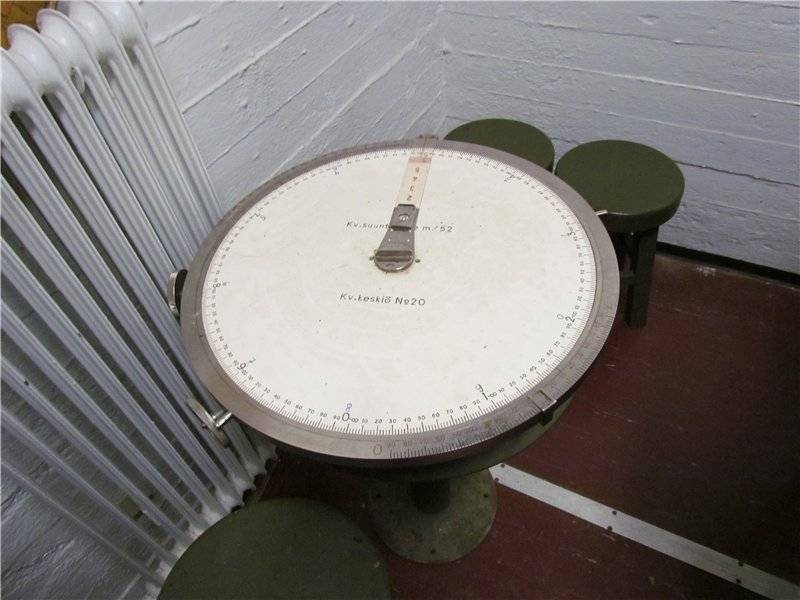 But here the fun begins. Amendments In order for the projectile to really fly to where it is needed, in addition to ship speeds and directions, one more thing to consider:

There is such a thing as “preliminary training”. It consists of two parts: ballistic training and meteorological.

All these measures are aimed at minimizing gun disruption, when according to one source the average projectile flight paths of shells pass at different ranges.

Accordingly, to minimize the inconsistency of the guns, it is necessary to coordinate sights, to fire shells and charges selected from the same batch from one batch, and to calculate corrections for the wear of the gun barrels.

The day correction is calculated every two hours for different projectile ranges.

So, the target is discovered. The range to the target, its speed and position angle in relation to our ship, the so-called heading angle, are determined. 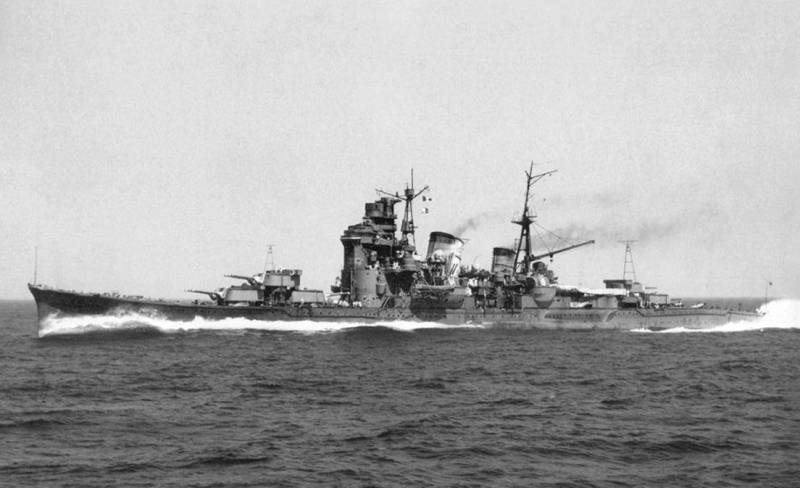 If you familiarize yourself with our “Textbook of the Deck Commander” about 177 pages published in 1947, then to your surprise you can read that all these parameters were determined by eye. Speed ​​- according to the breaker, depending on the class of the ship, which was also determined visually from the reference book, heading angle using binoculars with a grid.

That's exactly so, isn't it?

And when all this information is ready, it is entered into the “dial” and at the output the device gives only two digits. The first is the specified distance to the enemy, calculated at the elevation angle of the gun. The second is deviation. Both values ​​are transferred to each gun and the calculation induces the gun in accordance with these data.

In the KDP and DAC are the "guns ready" bulbs. When the gun is loaded and ready to fire, the lamp lights up. When all the bulbs light up in the DAC, the operator presses the button of the artillery gong, which sounds in the CDP and at the guns. After that, the vertical gunner of the KDP, which keeps the KDP pointing at the target, presses its trigger. 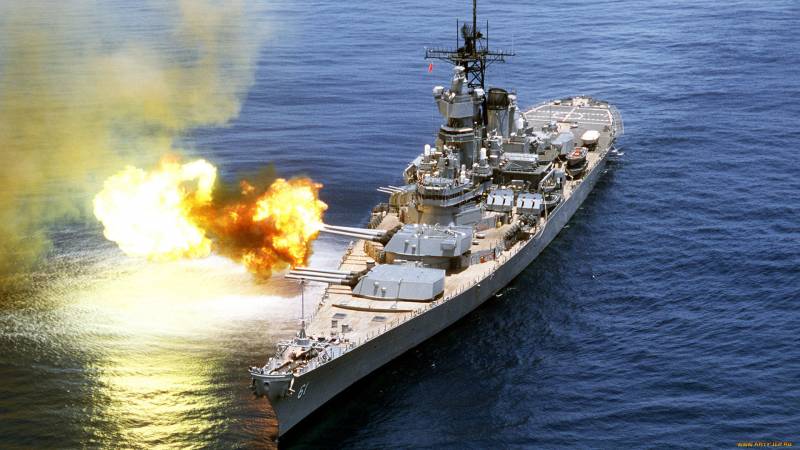 Then again the observers come into action, who must determine by the bursts around the enemy’s ship how the shells fell, with a shortage or a flight. Or, if there was a cover, then which one.

It follows the next adjustment, the change of sighting data and again everything is repeated. Until the complete destruction of the enemy or some other events, for example, just the end of the battle or the nightfall.

To be honest, one thing is surprising: as with mechanical calculators, terribly called calculators, instruments for obtaining data such as “binoculars” and “rangefinder”, sailors of two world wars generally managed to get somewhere ...

We are in Yandex Zen
We are building a fleet. Theory and Purpose
Scharnhorst. Creation, battles, trips and death of the German battleship
97 comments
Information
Dear reader, to leave comments on the publication, you must to register.