Mechanical mules. Conveyors of the front edge of the Soviet Army

In the interests of the military medical service

As you know, in the Soviet Union, all car factories were somehow involved in the defense order. The compact car class was no exception. The pioneers in this direction were engineers from the Moscow plant of small cars (MZMA), who in the early 50s developed a conveyor based on the 26-horsepower Moskvich-401/420. It was a front-engine car with flat exterior panels and a body designed for a pair of wounded stretchers. If necessary, only the passengers were covered with a tarpaulin top, and the driver was open to all winds and precipitation. It was here that the slightly utopian concept of rescue from small arms first appeared, when the driver jumps on the go and controls the machine crawling. To do this, the steering column was previously folded left to the side. Apparently, engineers did not think about what to do to a soldier when the fire is being fired from the left. In 1958, MZMA introduced a new version of the leading edge conveyor, developed on the basis of a promising family of military off-road vehicles of a wagon arrangement. Neither the unnamed Moscow TPK with the nodes of the experienced Moskvich-415 jeep, nor the family of cabless SUVs eventually went into series. The Ministry of Defense was not satisfied with the relatively high machine height, dimensions and the discrepancy between the stealth parameters on the battlefield. 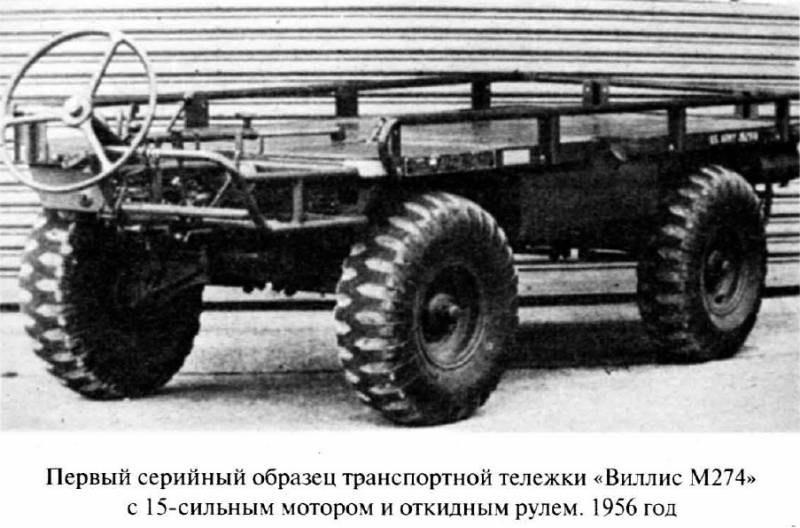 Photo: auto.kombat.com.ua
It must be said separately that the development of such machines was not exclusively the initiative of the Soviet Army. In the USA, a self-propelled M274 truck with a 15-horsepower engine and a folding steering column was already created by that time, and in Austria, the larger Steyr Haflinger was put into operation in 1959. However, this technique can not even be called the prototypes of Soviet conveyors, primarily due to the fact that domestic cars were able to swim and had a much smaller profile. 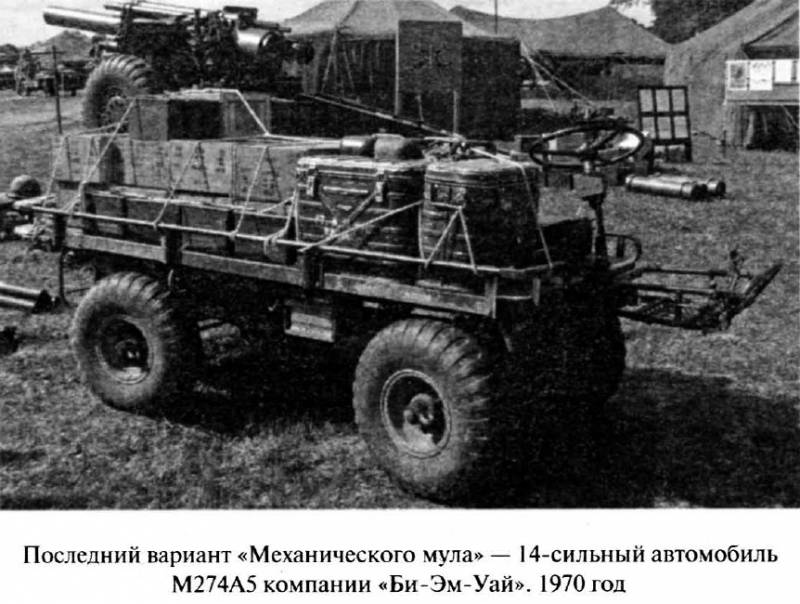 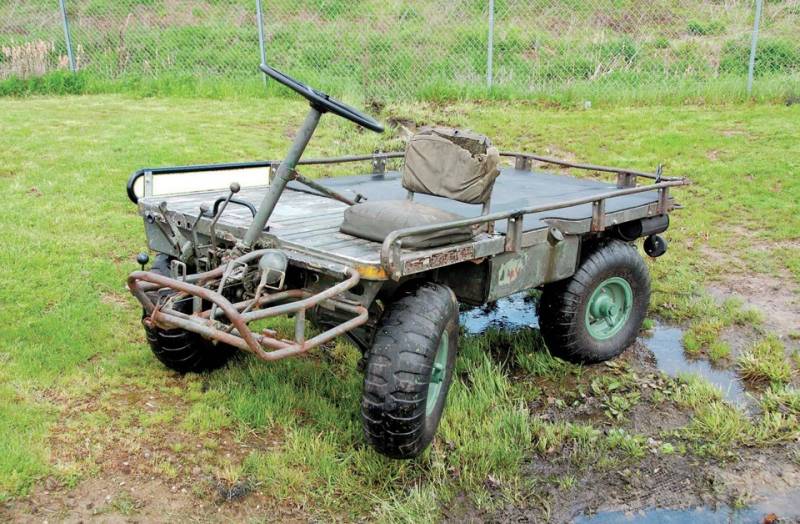 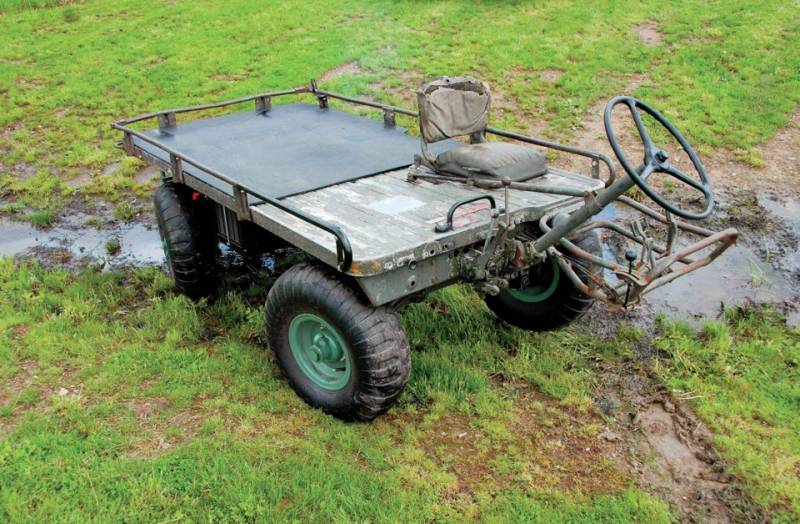 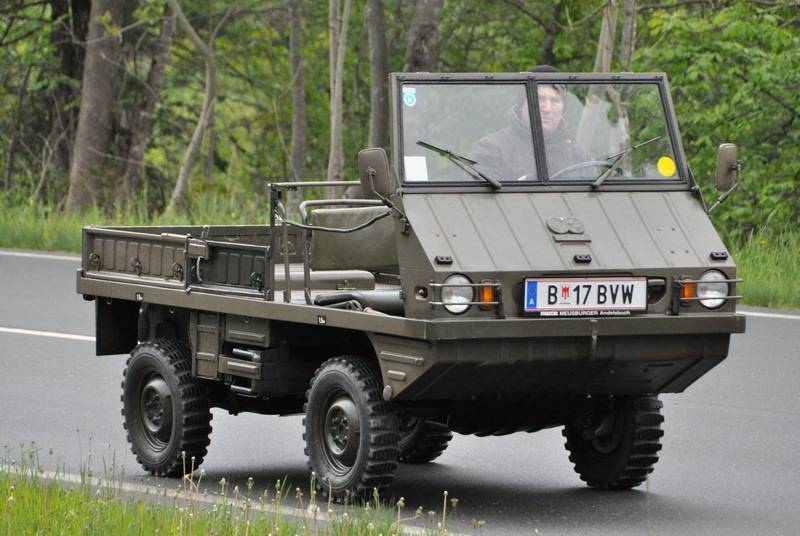 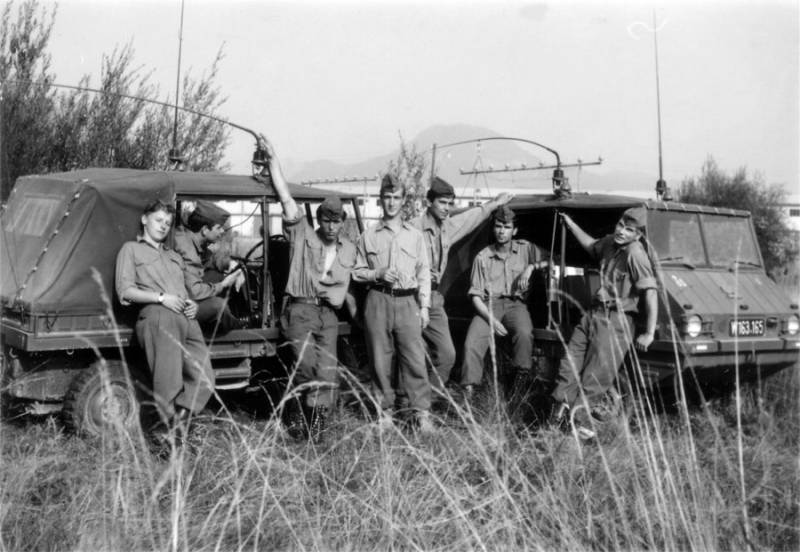 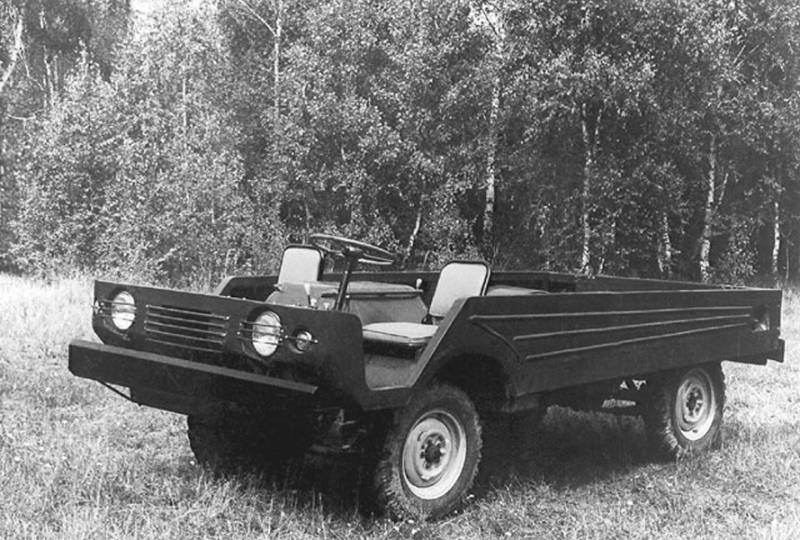 An unnamed prototype TPK with the nodes of the experimental Moskvich-415 jeep from MZMA, which did not suit the military with its dimensions. Photo: denisovets.ru
After unsuccessful experiments by MZMA in the development of military equipment, the order for the development of TPKs was transferred to the NAMI Research Automobile and Automotive Institute in the laboratory of passenger cars of the famous designer Yuri Aronovich Dolmatovsky. The motor was supposed to deliver a 23-horsepower M-72 from the Irbit motorcycle factory, and the body was supposed to accommodate a couple of stretchers with wounded or six sedentary fighters. But Dolmatovsky, one of the most original domestic engineers, obviously played up and presented to the military not at all what they asked for: the funny "Squirrel" by US A50. 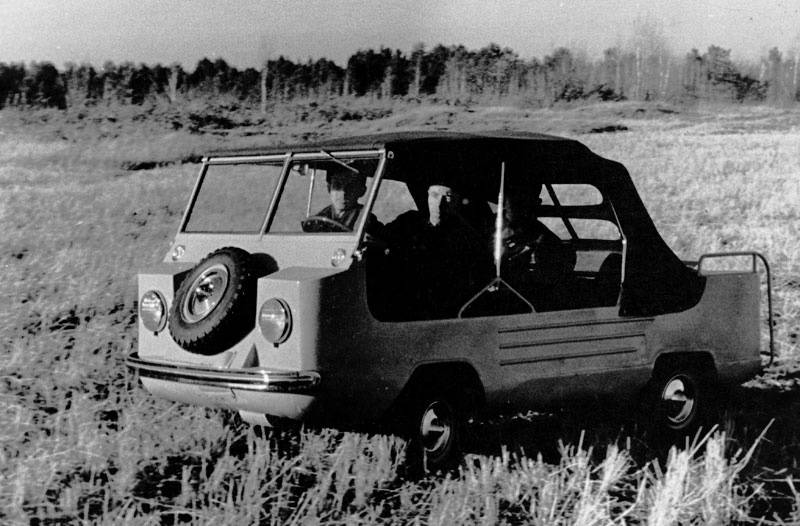 US A50 "Squirrel" - the failed TPK Yuri Dolmatovsky. Photo: denisovets.ru 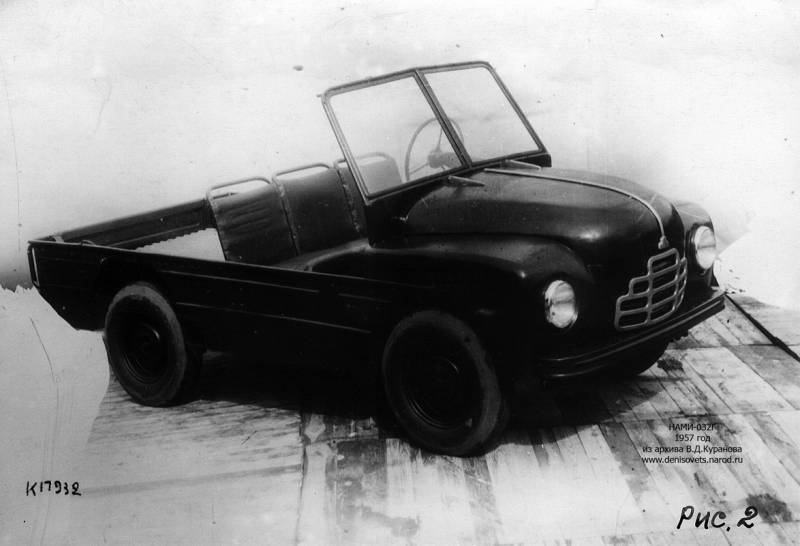 NAMI-032G is the first civilian TPK developed under the direction of Boris Fitterman. Photo: denisovets.ru
She did not have all-wheel drive, the motor was located at the rear and it was impossible to talk about any combat prospects of the car. As a result, the TPK project was given to Boris Mikhailovich Fitterman, Stalin Prize laureate, former chief designer of ZIS, design engineer, who had just left Vorkuta camp.

Under his leadership, in 1957, NAMI-032G ("a utility vehicle for cross-country use for use in rural areas") appeared. Fitterman categorically rejected the idea of ​​Dolmatovsky with a rear engine: he rightly decided that this would seriously impair the patency of the car. On a loaded TPK, the weight will shift back, the front wheels will remain underloaded and lose traction. In addition, the heavy loin of the machine afloat will cause serious trim in the stern. For the novelty, the chief designer chose a progressive independent suspension of all wheels with lamellar torsions as the elastic elements that were borrowed from the SZA wheelchair. 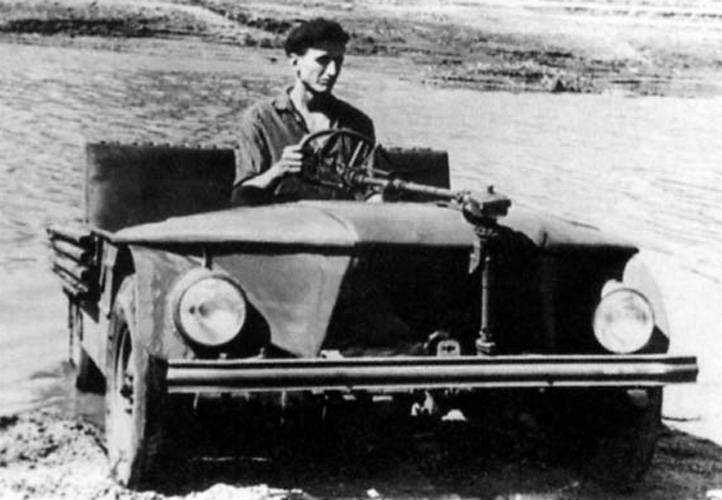 Boris Fitterman driving one of the NAMI-032C prototypes. Photo: denisovets.ru
21 liter air-cooled engine from. and a working volume of 0,764 liters for NAMI-032G were developed at the Irbit Motor Plant. Most of the experimental work on the program until 1957 also went on in Irbit. Realizing that the car is still experimental, Fitterman did not equip it with either a roof or doors. It was a kind of boat with wheels, capable of developing afloat up to 4,5 km / h. But NAMI-032G was actually the first domestic front-wheel drive car - the rear-wheel drive was connected forcibly. This Fitterman car had a completely non-military appearance, the car was more like a frivolous walking beach jeep. The truly first military TPK (and secret, of course) was the NAMI-032M with a low-sided displacement body, an inclined steering column located on top of the hood, and characteristic steel bridges mounted on the sides. With the help of these ramps or ramps, a miniature SUV with not the largest angles of entry and exit overcame deep pits and ravines. Since the machine was primarily intended for the needs of military physicians, a capstan winch on a belt drive from a motor was placed in front of the body to evacuate the wounded from the battlefield. To do this, the orderly neatly shifted the fighter to the drag boat, hooked to a 100-meter cable and pulled the evacuee to the car. 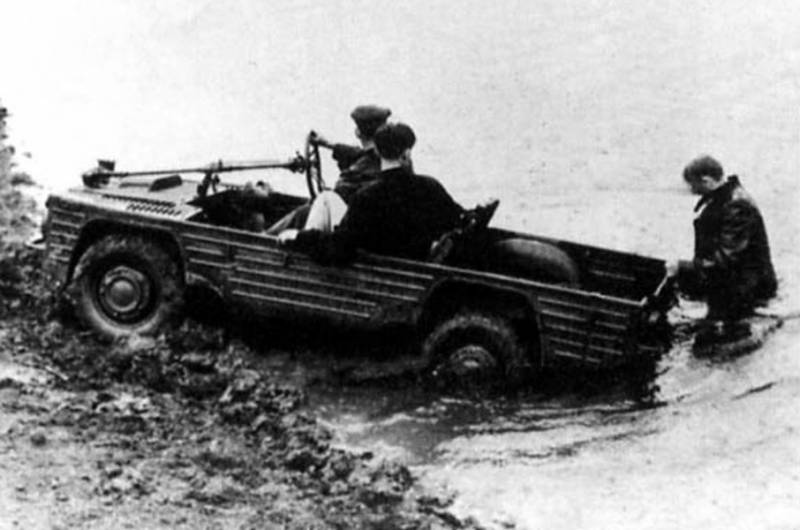 NAMI-032M comes out of the water. Photo: denisovets.ru
The driver was located in the center of the body and was no longer able to jump and drive the car in the event of enemy fire: by that time, an understanding of the absurdity of this idea had come. If there was a danger of shelling, the soldier simply lay between the stretchers (having previously threw back the seat and the steering column) and, hoping for good luck, left the car by fire.

NAMI-032M had an impressive ground clearance of 262 mm, which was provided, among other things, by wheel gearboxes with a gear ratio of 1,39. The maximum carrying capacity of NAMI-032M with a curb weight of 650 kilograms was limited to half a ton, but it was possible to tow a trailer of a similar weight.

The first tests in the presence of the military showed that structurally NAMI-032M should be further carefully developed. In the memoirs of testers there are such lines:

“The front-line transporter went through the snow, but then he ran into something and stalled. The chief designer stomped in fury. There was a tantrum with him. The people rushed to the jammed car and pulled it back, after which the call was repeated again. And trouble must happen - the car again ran into some kind of obstacle and stopped in the snow. Marshals waved their hands, got into their cars and drove away ... "

NAMI-032M didn’t show itself very well not only on virgin snow, but also on the water surface - as it turned out, amphibian could confidently swim only in absolutely calm weather. Even a small ripple on the water was a problem for the TPK, and in such a situation it could well be at the bottom. This was largely due to the heavy weight of the machine - the military ordered no more than 550 kilograms in running order. Tests also showed the low reliability of most TPK units, which in this case cannot be called a critical drawback: the machine was still fundamentally new in design. For example, a low-power motor with a low torque had to be constantly twisted to the maximum speed, which reduced its service life, and also revealed problems with the lubrication and cooling system. There were constructive miscalculations. So, an independent suspension should have provided better cross-country ability, but its stiffness was excessive, which provoked earlier hanging the wheels on bumps. Further, the military was not satisfied with the lack of protection of the crew from rainfall - it was necessary to build a canvas top and a windshield that protects from branches in the forest. NAMI-032M and motor power were not enough. However, at this time, the Melitopol Motor Plant began to prepare for production a four-cylinder V-shaped air-cooled engine, which was planned for the promising TPK. 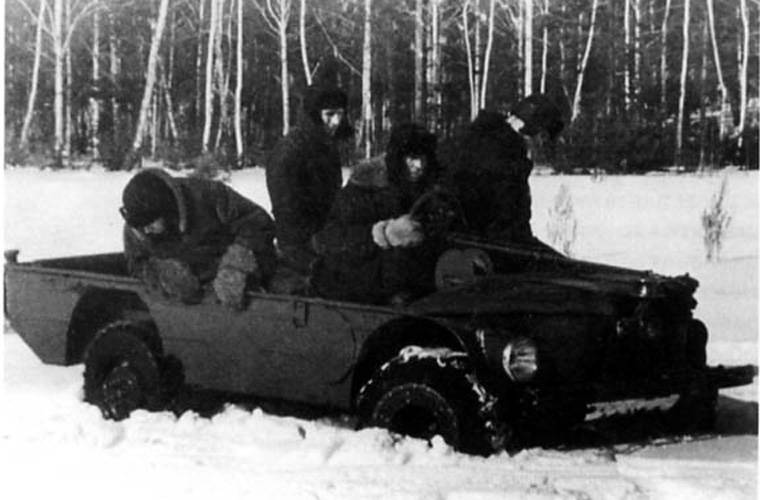 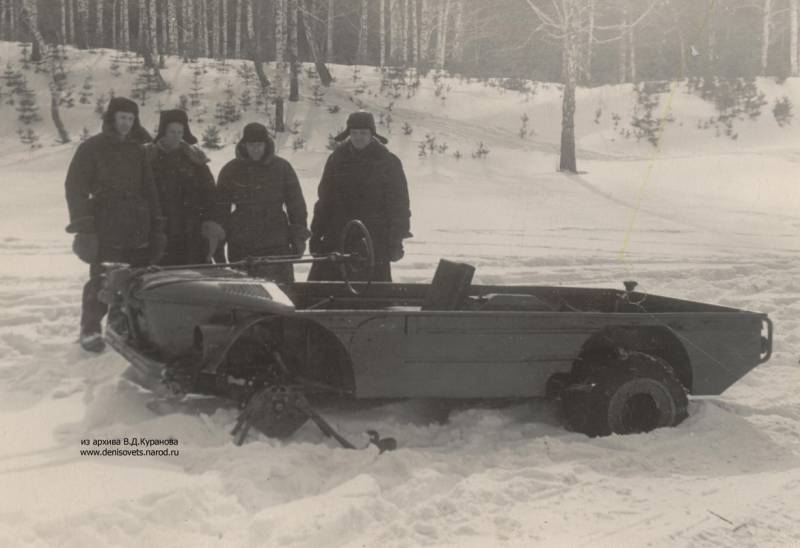 NAMI-032C is the last attempt by US engineers to defend their car in front of the military. As you can see, to improve cross-country ability on snow virgin snow, skis were mounted on the front axle. The result was a unique car - a hybrid snowmobile with the ability to overcome water obstacles by swimming. Photo: denisovets.ru
Be that as it may, the test results turned out to be rather positive both for the Ministry of Defense and for developers - the general concept of a completely new amphibian was approved.

After improvements in 1961, the third generation of the conveyor appeared, which received the name NAMI-032C. The letter "C" in this case meant "fiberglass" - it was Fitterman's desire to reduce the weight of amphibians. The overall layout of the car was unchanged, but the steering shaft was now horizontally located above the high hood, and for movement in the snow the chief designer suggested replacing the wheels with skis. This was a reaction to the NAMI-032M failure described above on virgin snow. But even taking into account such improvements, the car did not satisfy the military. Fitterman stubbornly did not mount the windshield and the tarp roof on the TPK, and the fiberglass body was not strong enough, although it was much lighter. 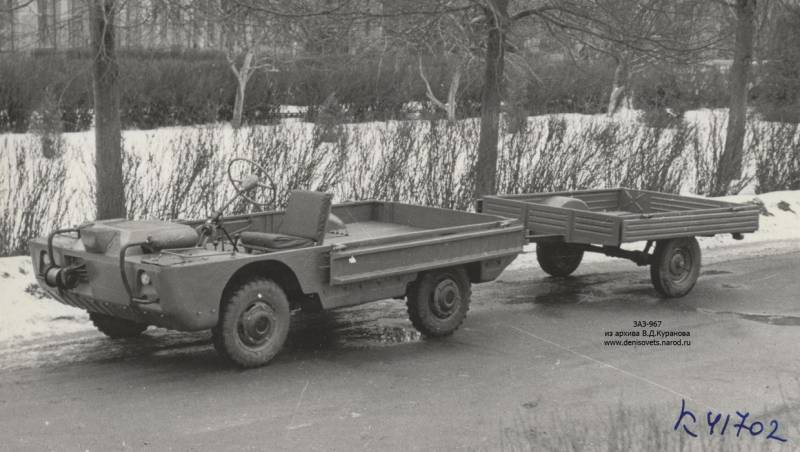 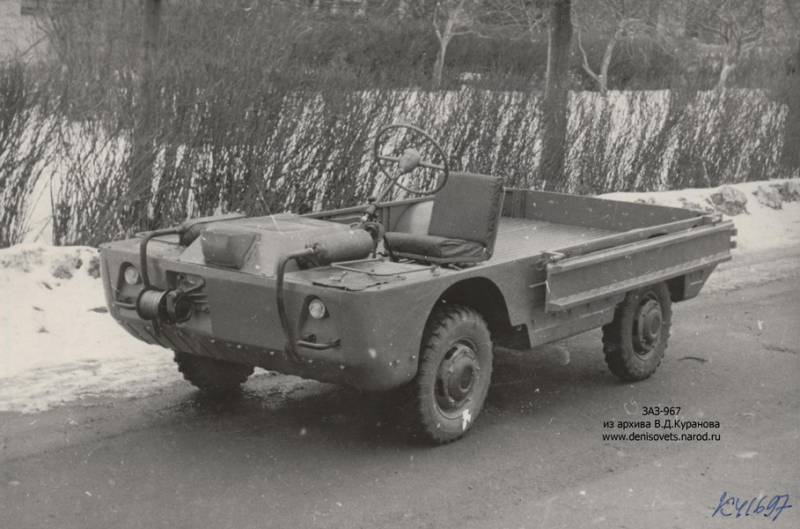 ZAZ-967. Photo: denisovets.ru
The result of many years of work by engineers from Irbit and NAMI was a clearly developed concept of a floating front-line conveyor designed to evacuate wounded soldiers, as well as deliver weapons and ammunition to combat units. The idea, which has no direct analogues in the world, was further developed already at the Kommunar Zaporozhye Automobile Plant, the founder of the legendary Zaporozhets series of small runabouts. First of all, under the hood they installed MeMZ-967 with a capacity of 22 liters. with., and also deprived of headlights in front of a body. Now, according to the idea, the road was lit by one headlight located at the driver's side, which did not need to be sealed. High cross-country capability was provided by an advanced transmission devoid of cardan joints between the front gearbox and the rear differential. The fact is that the gearbox was rigidly connected to the rear axle gearboxes with a pipe in which the drive shaft was located. And the semiaxes were swinging (the suspension, as we recall, was independent) was carried out by means of sliding crackers from the differential side and cardan joints from the side of wheel reducers. The Zaporizhzhya prototype TPK received the name ZAZ-967 and in 1965 prepared for complex state trials.

We are in Yandex Zen
Multi-axle rocket carriers
German amphibious vehicles
35 comments
Information
Dear reader, to leave comments on the publication, you must to register.