Live Russian rhombuses. The most famous tank of the Great War in the former USSR 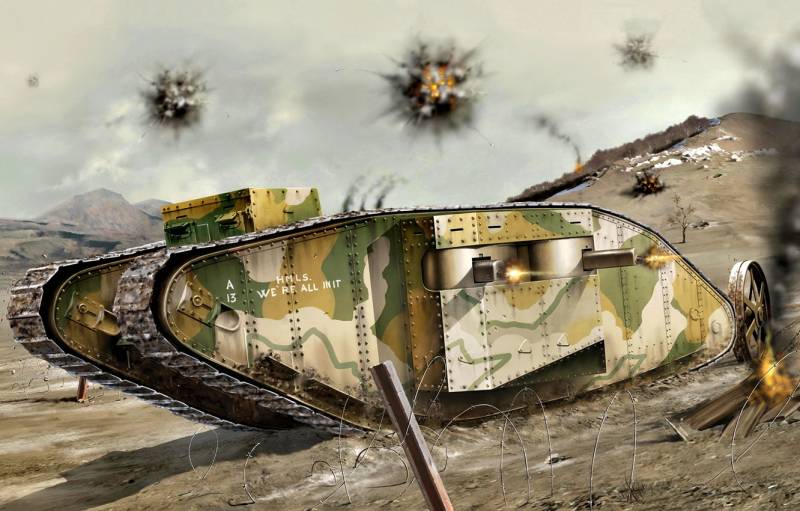 Having barely appeared on the battlefields, the "rhombuses" changed the face of war

Initially, the British wanted to create a tank by booking a tractor chassis and hanging a cannon on it. Then they would have got something like the German A7V or the French Saint-Chamonix. Such a monster would mix mud well, but pass in front of a vertical relief. And the last one on the fronts of the First World War was in bulk - trenches, funnels from shells and so on.

Then Ernest Swington, inventor tank, I decided to put caterpillars around the entire body. And so the famous diamond-shaped silhouette turned out - it simply was the most optimal from the point of view of overcoming steep slopes.

The name "tank" that the machine spawned appeared almost by accident. It was assumed that the novelty can, if not turn the tide of the war, then at least produce a strong tactical effect. Therefore, the product was kept in the strictest confidence. They “masked” them under large water tanks prepared for shipment to Russia. They wrote scribbles in Russian: "CAUTION PETROGRA b." And labeled as “tanks”, that is, as tanks.

Life inside the "rhombus" was a real hell - the temperature under 40 degrees, the smell of mechanisms and working engines, a disgusting view. But the new tool was quite effective, although it did not solve the problem of positional war overnight. Having appeared, the tank has forever changed the face of the war.

The adventures of the British in Russia

Tanks have been actively used throughout the war, starting with their debut on the Somme. From dozens of cars quickly moved to mass production. Rhombuses riveted thousands of pieces. They went into battle in the hundreds.

And, of course, they went beyond the First World War, as soon as it ended. Having fallen, for example, on the battlefields of the Civil War in Russia. Both in the composition of the interventionist forces and in the quality of the “rhombuses” transmitted by white. Across the vast expanses of Russian unrest rumbled tanks decorated with the inscriptions "United Russia", "For Holy Russia" and others.

And where there is war, there are trophies. The Germans in World War I produced so few tanks that in World War I they had more trophy “rhombuses” in the army than their A7Vs. Something similar happened with the Red Army - she actively mastered any technique that she managed to get her hands on. And British tanks received a second life in Soviet Russia. 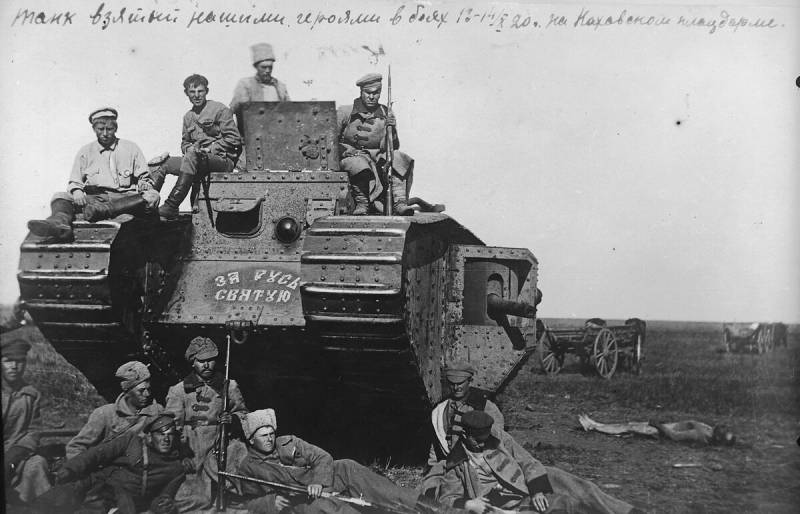 Captured by the Red Mk.V "For Holy Russia"
"Rhombuses" were on the balance sheet of the Red Army until the 30s, when the rapid development of the Soviet tank industry made them already unnecessary. The tanks would have been given for re-melting, but that’s all. The fate of some trophies was decided by Voroshilov, to whom they reminded of the times of youth victories. Of them made monuments throughout the country.

Only 5 of the tanks sent to this business have survived to this day - all Mark V. models. One machine-gun "Female" and 4 "Hermaphrodite" armed with a gun and machine guns. The latter, by the way, are the only ones (for Mk.V) in the world - and all are in the vastness of the former USSR. Where are we going now.


The “female” was sent to Arkhangelsk, where she reminds us of the British intervention. And also about the fact that our ancestors managed to overcome this very intervention - not only having driven the British out of their land, but also having captured trophies.

This, perhaps, is one of the most inconvenient for inspection and photographing machines - a “rhombus” protects the roof from the corrugated board from above, and glass walls attached to the welded frame protect on the sides. This, of course, helps from vandals, but at the same time makes the tank the least interesting from the point of view of ordinary visitors. But if you find yourself in Arkhangelsk, it’s quite possible to call in to admire the curiosity - not every city has it. 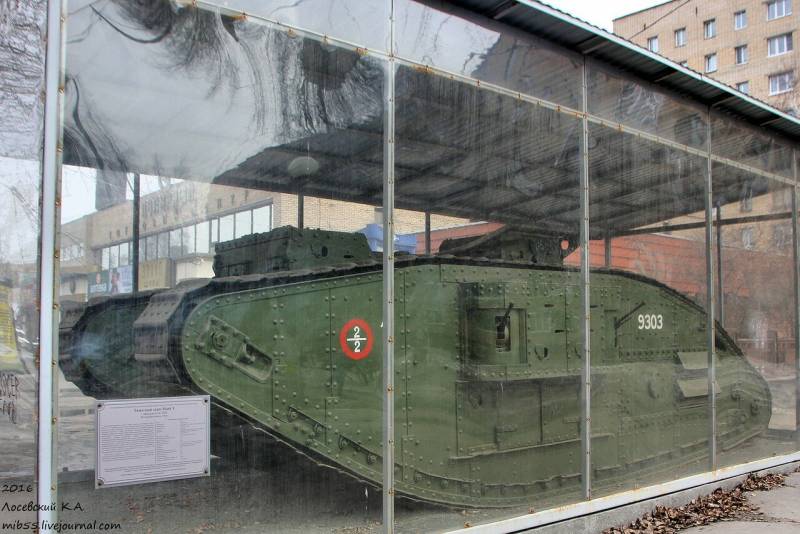 
The first of the four "hermaphrodites" is located near the city of Kubinka, in the Patriot Park.

He moved there from the famous Central Museum of Armored Arms and Equipment, commonly known as the Cuban Tank Museum. And it definitely benefited - the conditions of inspection in the Patriot are incomparably better. The hangars of the old museum were famous for the dank cold in the winter, and in the summer they simply didn’t let the exhibits be properly examined - the tanks were tightly pointed side to side, resembling herrings in a barrel. 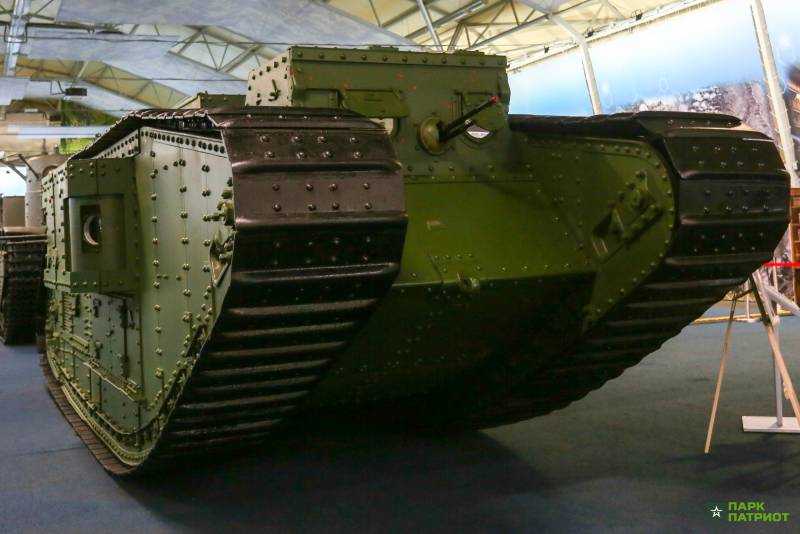 Mk.V from the Patriot
Another thing “Patriot” is that there are no global problems with light, you can get around from all sides, it’s always warm inside, unless you can climb in. In this sense, the creation of the Ministry of Defense is a definite plus - especially in comparison with the “old” museum.

Another hermaphrodite is located in Kharkov. The condition of the exhibit, let's say, is not the best. But there is an unconditional plus in the convenience and visibility of the inspection - the tank is in the open air, and nothing prevents it from getting around from all sides. There are no problems with light - due to the lack of a roof, as in Arkhangelsk.

True, because of the tension between Russia and Ukraine, customs problems may occur - at any moment another unpredictable political combination may begin, new laws may be adopted that will complicate your task. But if you still ended up in Kharkov, then inspect the "diamond". 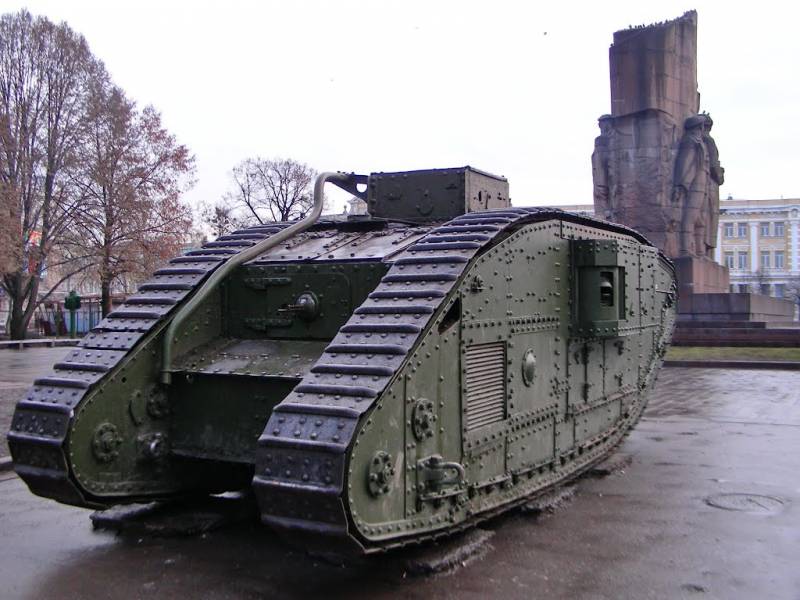 But where at the customs they let me go without any problems, it’s at the entrance to the Lugansk People’s Republic. You don’t even need a passport - you show the usual passport of the Russian Federation, you are issued, and now you are already in this young country.

Do not be afraid of enemy artillery - it has not massively fired on the central quarters for several years. And to the front line, where you can still hear the sounds of a rifle weapons or mortars, you won’t stop. At least by accident - first you have to overcome at least 3 roadblocks.

Supermarkets work in Lugansk, apartments are for rent, taverns operate - everywhere they accept rubles. The local population is not just friendly - it is no different from the population of any Russian city of the same size. Especially when compared with Kuban - here even the South Russian dialect is the same. 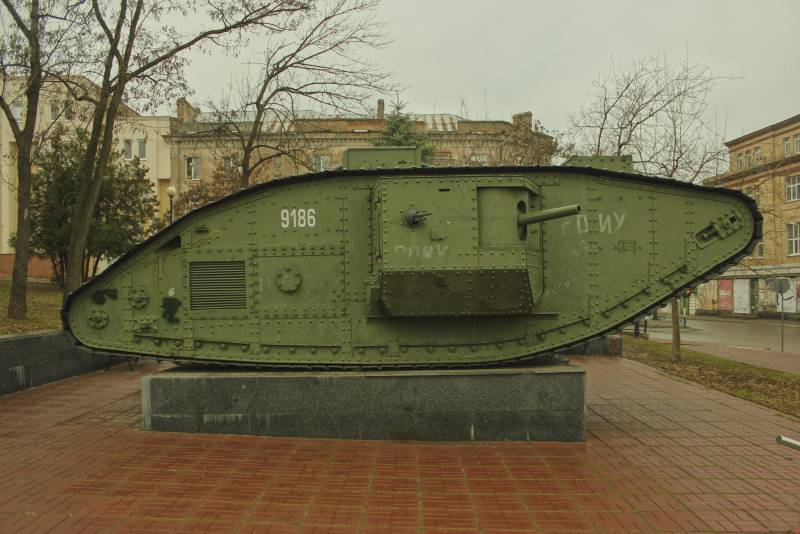 One of Lugansk Mk.V
Yes, and the tanks of the Great War there are as many as two - Lugansk "rhombuses" survived all the hardships of the 2009th century and survived to this day. Of course, once they looked rather ugly, but in XNUMX they were quite qualitatively restored at the local diesel locomotive plant. And look at them today is pretty nice. Moreover, there are tanks in the open air, access is unlimited by anyone - you can even carefully climb in and inspect the engines from above.

A memorial in memory of the Civil War is also attached to the Lugansk "rhombuses". In 2017, traces of shelling were still visible on it - human sculptures of the Red Army and granite slabs were hooked. So on the civil war of the XX century, its companion was superimposed, but already from the XXI.

We are in Yandex Zen
German tanks of the First World War
Is the old well forgotten to become the new? Part-2. By call of honor and duty
91 comment
Information
Dear reader, to leave comments on the publication, you must to register.