The battle of Monte Cassino and dreams of white plume 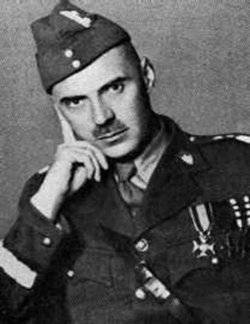 Vigorously opened in September 1943, the Italian front, after fleeting victories, came across an obstacle built on two lines of defense: the Gustav line and the Hitler line - fortified areas created under the able guidance of Field Marshal Albert Kesselring. The main strategic goal of the Allies was the capture of Rome, but the direct road to the Eternal City was blocked by strong German positions with the ancient Benedictine Abbey dominating them on Monte Cassino. Commander of the 15th Army Group, gene. Harold Alexander, decided to take it in the forehead, although the commander of the French Expeditionary Force, gene. Alphonse Jun, suggested flanking enemy positions from the flank, through the Aurunchi massif.

After three unsuccessful bloody assaults of Monte Cassino by the forces of the American II Corps and the New Zealand II Corps and the failure of the auxiliary landing operation under Anzio gene. Oliver Liz, commander of the British 8th Army, whose operational subordination was II Polish Corps, suggested the gene. Vladislav Anders to carry out the fourth assault on the abbey. General Anders made this fraught decision without agreement with his supreme commander, gene. Casimir Sosnkovsky. Later, he explained his behavior by the desire to resist Soviet propaganda, which, due to the aggravation of relations, spread the assertion that after leaving the Soviet Union, the Poles did not want to fight the Germans; he also believed that victory will give courage to the resistance movement in Poland and will glorify Polish weapon.

However, the gene. Sosnkovsky was horrified, especially from the plan to attack directly in the forehead the well-fortified German position, which the British staff planned with criminal neglect of the fundamental principles of military art. This led to a dramatic skirmish between two Polish generals. Sosnkovsky was at that time the most experienced Polish senior officer, and Anders, before the war the commander of the cavalry brigade, had practically no operational experience.

Historians rarely happen to verify the circumstances of such dramatic events by comparing opposing opinions. In this case, however, both opponents left notes about the conflict on the pages of their memoirs. Gene. Anders limited himself to a few general phrases, reducing the argument to differences in tactical issues. He wrote that, in the opinion of the supreme commander, despite the huge losses, Monte Cassino will not be taken. Sosnkovsky is the same as the gene. Jun, saw the possibility of success in flanking the enemy on the left.

Gene. Sosnkovsky was not so mysterious. In his memoirs, he accused the commander of the II Corps of pursuing his personal ambitions:

It is true that I said to General Anders the words he quoted as saying “you dream of a white plume”. But I told him much more: first of all, I stated that I consider his arbitrariness a violation of military discipline, and very dangerous and harmful in exile; I further told him that to control Polish blood in a difficult political struggle for the future and the rights of our people is the business of the highest authorities of the Commonwealth and that ignoring these bodies for the sake of foreign political forces allows the latter to win private ambitions in the name of their own interests, which may after all, to go against our own national interests, as the Tehran conference and Churchill’s speech in the parliament of February 22 proved.
Although under normal conditions for such behavior, the corps commander should be removed from office, gene. Sosnkovsky did not go on disciplinary sanctions knowing that such a scandal would only provoke contention in the Polish camp and unpredictable consequences in international relations. Worse, it was too late to change the decision itself, all the more so since the gene had become impudent from impunity. Anders openly sided with the generals Alexander and Lisa. 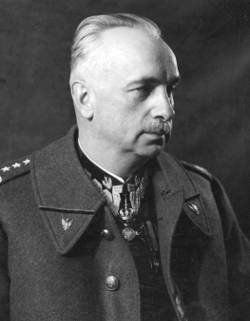 General Kazimir Sosnkovsky
So, the poorly planned Polish offensive began on May 12, 1944. After six days of stubborn battles with replenished parts of the Alpine riflemen, the selected 1st Parachute Division (Gen. Leyt. Richard Heidrich), which won and failed to defeat, patrols 12 The ulan regiment was finally occupied by the ruins of the abbey. They occupied, but did not, because the Germans had left them the day before.

The heroism of soldiers fighting in difficult conditions with an experienced and well-trained opponent is not in doubt. However, the question of the professional level of command is open. Major Ludwik Domogne, commander of the 18th battalion of the 5th Infantry Division, assessed the course of the battle briefly but critically, emphasizing the lack of coordination of operations as a result of inept command at all levels, especially at the corps level: The only supreme commander who (...) knew what was happening on the battlefield and led the battle, there was a deputy commander of the 5th Armored Infantry Division, Colonel Clemens Rudnitsky. The conclusion of his conclusions is derogatory: the battle for Monte Cassino was won by our heroic soldier to the level of battalion commander, and that’s the point. 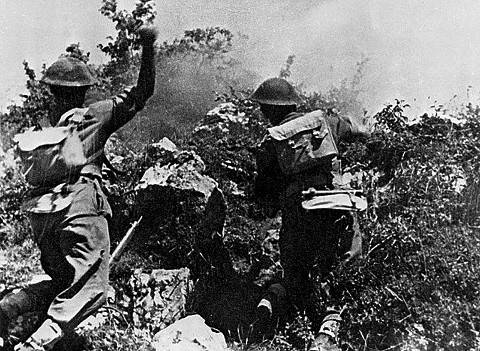 Polish soldiers are fighting for Monte Cassino
Contrary to the legend that arose in the West with considerable help from the gene. Anders, who did not disdain even the falsification of documents, the efforts of the II Corps did not play a decisive role in the battle for Rome. The Germans' departure from Monte Cassino was predetermined not by a bloody, but useless attack on the forehead, but by a regular evasion of their defensive positions by a gene corps. Jun, who was ultimately given freedom of action. Anders' thesis that the sacrifice of his soldiers will have political significance, attracting the attention of world public opinion to the Polish question, has not been confirmed either. The media honored Polish soldiers for only a few days. British Prime Minister Winston Churchill barely gave them a mean line in his memoirs: They were very distinguished in this first major battle in Italy.. There remained soldierly (but not generalist) glory, but outside of Poland only military historians remember it.

As a result, the victim of Corps II on Monte Cassino served only what Sosnkovsky was so afraid of: strengthening political influence and the false legend of his commander.

We are in Yandex Zen
How can Russia survive and win in the 21st century?
Valentin Falin: West and Russia in the XX century: connection of times
37 comments
Information
Dear reader, to leave comments on the publication, you must to register.