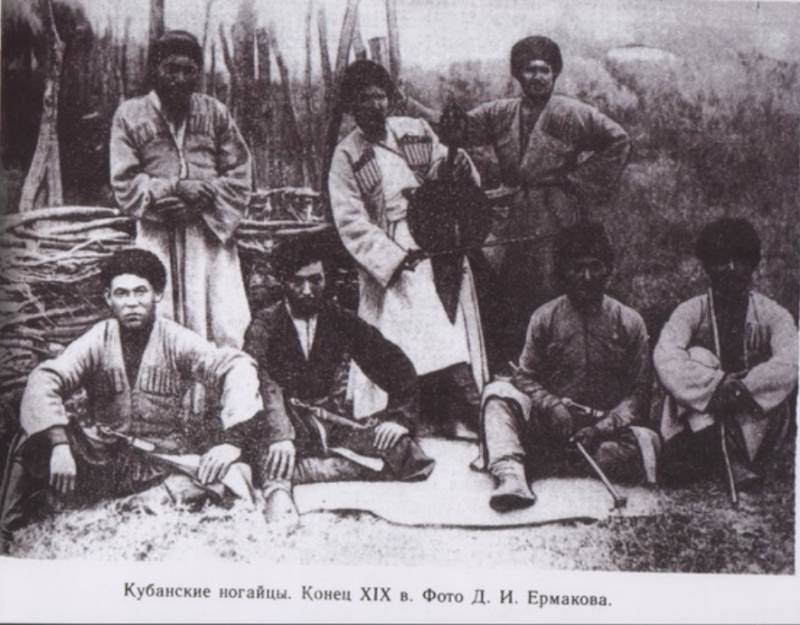 The Nogays are a Turkic-speaking ethnos that was formed in the relations between Tatars, Pechenegs, Mongols and some other nomadic tribes. They got their name thanks to the Golden Horde Beklyarbek Nogai. During the elevation of Nogai, the Bulgarian kingdom depended on him, he fought with Byzantium and went campaigns together with the Russian princes to Lithuania and Poland, ravaged Shirvan and Derbent. 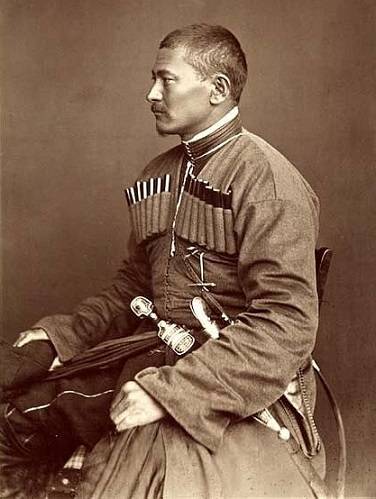 Nogay in traditional Caucasian Circassian
After a long nomad from Central Asia and Siberia to the Black Sea coast of the North Caucasus, many Nogais settled on these lands. So, the largest Nogai community in Russia settled in the Caucasus - in Dagestan, the Stavropol Territory and Karachay-Cherkessia. Naturally, the way of life itself dictated not only a special attitude to horses during the nomadic movement, but also to the main tool of the rider - the whip. For Nogais, the whip has become not just an instrument, but truly inspired weapons.

Kamchu began to weave immediately after a son was born in the family, and during childbirth the father's Kamchu was necessarily hanged over the woman. Sometimes during labor pains women were even smacked with Kamchka so that the fetus would come out faster. Kamcha itself was a fairly short whip with a handle no more than forty centimeters in length, to which a leather whip was attached. At the same time, while weaving the lashes, conspiracies constantly spoke, so that the Kamcha brought luck to the owner. 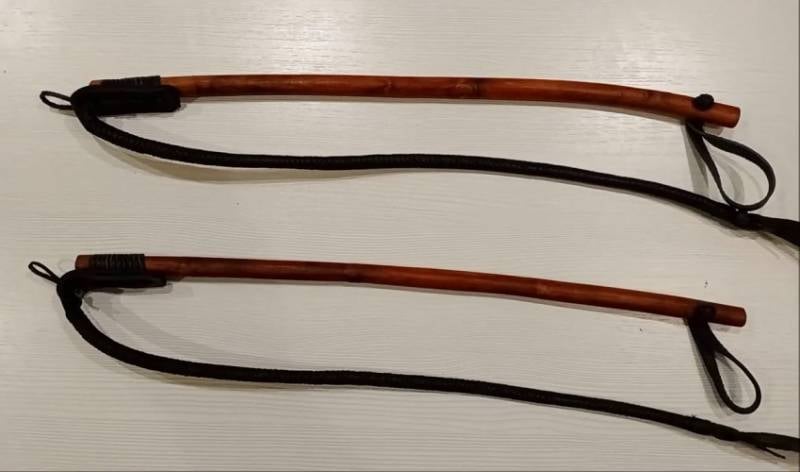 Kamcha ordinary Nogay
The length of the lash itself was approximately the same as that of the handle, but there were exceptions. The weave was the most diverse - it could be serpentine or was a plexus of four, ten and even forty separate lashes. The material used was leather, for example, goat. The skin was kept for up to three weeks, cleaned of wool, cut into strips, dried and then cut into thin ribbons. The lash was attached to the handle with the help of a rod braided with ribbons, also made of leather, often cow. Tamga was necessarily applied to the hilt - a generic family sign, something like a seal. Therefore, it was easy to understand by who it was who was standing in front of you. And, of course, a lanyard was attached to the handle so that the Kamchu would not be knocked out of the hands during the battle. It took from several days to a couple of weeks or more to create kamchi. 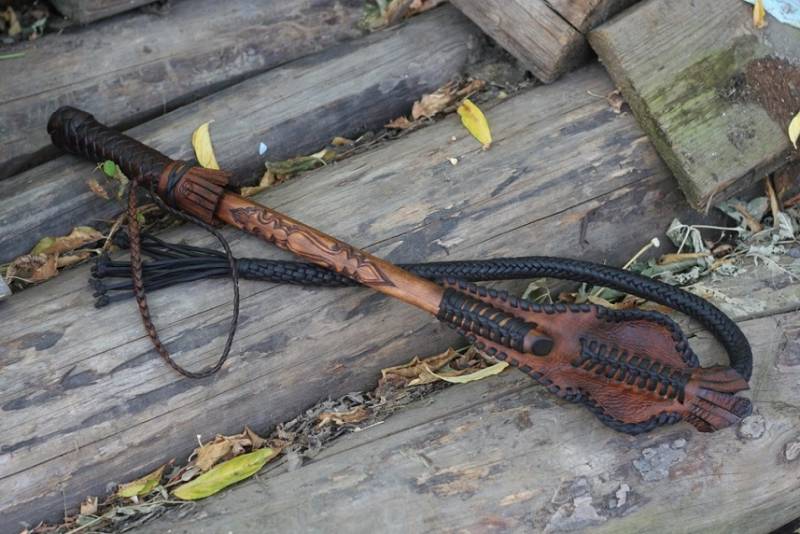 Of course, Kamchu was decorated and modernized in every way. At the end of the lash, fluffy leather tassels were placed, or on the contrary, a weighting material was braided from metal - then kamcha resembled a top. True, the treatment with her was changing, they tried not to quit horses with such a flock.

Only men who received it when they reached 12 years old had the right to wear Kamchu from Nogais. Since then, losing Kamcha was considered almost a crime before the clan. She served as a real biographical book of its owner. Each major event, each achievement in the owner’s life was necessarily depicted on the hilt. And woe to that horseman, whose kamcha wore only a lonely tamga on him all his life. Sometimes kamcha was passed from father to son, but this was more true for noble families, when kamcha became already a symbol of power, but more on that separately.

For kamchi in the house was given a special place. And since she was very often used as a weapon, to enter on a visit with her in her hands was tantamount to a challenge to a duel or a serious insult.

Weapons, a symbol of power and magic

Kamcha, in addition to its natural functions, also played the role of a weapon. Trained Nogai fighters could easily knock an enemy rider out of the saddle with the help of kamchi, and sometimes even kill him. For this purpose, a metal weight was woven into the end of the Kamchi. After long training, an experienced Nogai rider could hit the enemy from the first blow. And if the enemy was wearing a helmet, then a well-aimed blow could (not without difficulty, of course) break his nose or knock out his eye. Kamcha with a weighting agent was also used during the hunt. One blow to the head of the animal, and it only remained to refresh the carcass. Periodically weighted and the handle itself. 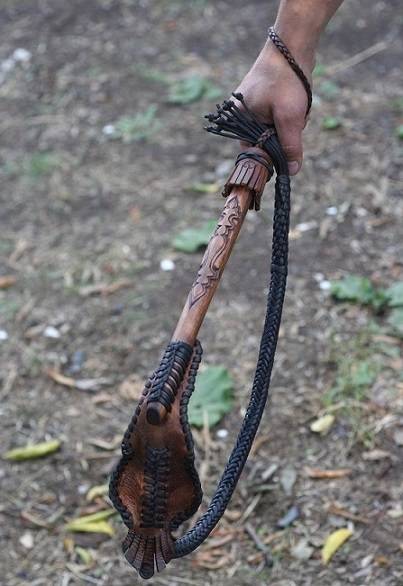 They also used Kamcha during the resolution of various disputes, when the situation became hopeless. The debaters sat down, took each other by the left hand and rested their feet on the enemy. In their right hand they had only Kamcha. Wielding it, they began mercilessly whipping the opponent until someone lost consciousness or lost strength.

A lot of sayings are connected with Kamcha, opening this weapon from new sides. For example, there was a saying that “whoever has kamcha is strong, he has a conscientious wife.” On the one hand, kamcha here was tacitly figured as a symbol of the masculine principle, and on the other hand, careless wives at that time were admonished not by a kind word, but by a hard deed. There were romantic proverbs that said that the honor and justice of a man are enclosed in kamch. But dry prose and reality was far from sentiment.

Kamcha among the Murz, Bei and Nuradin (aristocratic titles and military-administrative ranks) was a symbol of power. And, of course, with a simple shaft with a leather lash, the Kamcha of a noble Nogai had little in common. Kamchu of a high-ranking Nogai was made from completely different materials. The handle was made of ivory, silver and even gold. She was adorned with precious stones. The skin for the whip was taken the most exotic and was of different colors, so the brush on the end of the kamchi seemed some kind of deadly flower. 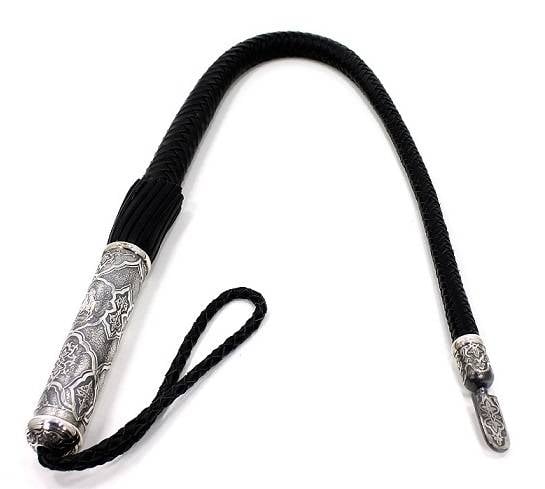 One of the catchphrases, attributed to a certain Dildebay from Zhetysu (a region in Central Asia near the lakes of Balkhash and Issyk-Kul), said: "Even if the people do not respect me, they will respect my whip." What can I say? Can not argue.

Such an attitude towards Kamcha could not but lead to the rewarding of these weapons with magical properties. And since the Nogais of the North Caucasus closely communicated with the Circassians and adopted their customs, the world of various superstitions among them was unusually rich and wide. Beliefs in shaitans, genies, sorcerers, and spirits were common. The Nogais even believed in the existence of a water snake, which, rising from the water, touched the head of the clouds. To protect against this whole army of evil spirits, the Nogais not only sewed a patch of spell prayers from the Koran into their clothes on their backs, but also did not part with kamcha. Kamcha sometimes hung over the bed in order to protect the family from evil supernatural creatures. And if an evil spirit, such as a genie, “settled” in a person, then he was provided with whipping.

We are in Yandex Zen
"The relations of the Golden Horde with the Principality of Bulgaria"
Vasily Kashirin: Russian troops entered Bessarabia and liquidated the Bujak Tatar horde at the start of the Russian-Turkish war of 1806-1812.
52 comments
Information
Dear reader, to leave comments on the publication, you must to register.