Zelensky's formula: exacerbate the situation to the limit 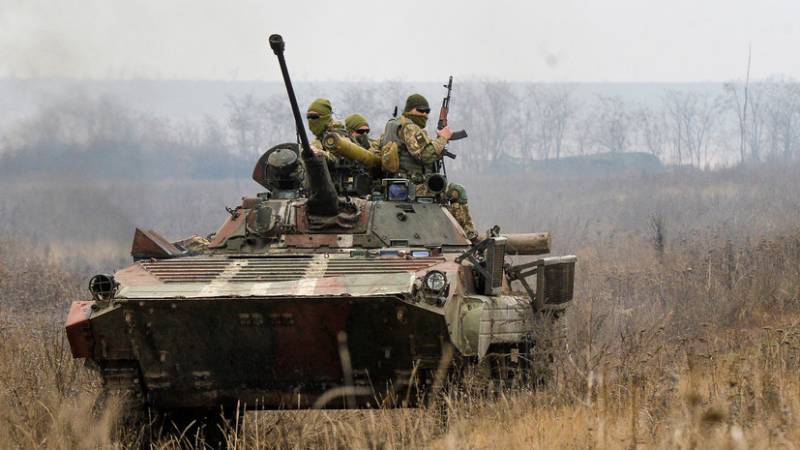 The situation is heating up

Last week, fights were carried out practically over the entire demarcation line using calibers prohibited by the Minsk agreements. One of the events noticed by the central media was the battle near the village. Golden on February 19, in which almost all the autumn the sides divorced forces and means. The details of the clash and the number of casualties of the parties are very different not only in the interpretation of local and Kiev media, but also in the comments of military commissars.

If we discard the insinuations, we can conclude that it was an unsuccessful sortie of the Ukrainian DRG, which first ran into a minefield, and then into shelling, and was forced to withdraw with losses, followed by an artillery duel. Moreover, the LNR artillerymen sent "greetings" to the enemy’s positions, and the APU, as always, fired not so much at the positions of the people's militia as at the settlements of Golubovskoe, Kirovsk, Donetsk, etc.

The escalation of violence was officially recognized. Donetsk announced an increase in tension along the entire front line and a twofold increase in shelling in a week. Major General Ruslan Yakubov, the head of the DPR representative’s office in the JCCC, said:

“Over the past week, there has been a tendency to aggravate the situation on the line of contact between the Armed Forces of Ukraine. This week, compared with the past, a twofold increase in the number of ceasefire violations was recorded. ”
It is noteworthy that in the LPR refrained from such statements.

A ban on retaliatory artillery fire is widely discussed in the republics, which either acts exclusively on sections of the front that are directly monitored by representatives of the Corps, or should act everywhere, but in fact, local commanders decide everything. Be that as it may, the fact remains: on the same morning, February 19, when an exchange of artillery strikes took place between the LPR People’s MP and the APU, in the village. Zaitsevo near Gorlovka Ukrainian warriors freely fired on peaceful neighborhoods, destroying several private houses, and the "response" to their actions did not follow.

Among the servicemen who were “lucky” to serve in front sectors and in units regularly encountering a ban on enemy aggression, gloomy moods naturally prevail. Many are trying to transfer to other, less controlled units, or even refuse to renew the contract. Given the total lack of people, not only at the front lines, but also in the rear, such a policy could adversely affect the fighting efficiency of the people's militia. Although what kind of combat capability can we talk about if it is forbidden to react to enemy artillery and mortars?

Apparently, the position of the Ukrainian president Zelensky is either to push through the reformatting of the Minsk agreements (which, once started, will quickly reach senility and demand complete surrender of LDNR), or provoke a full-scale conflict on the demarcation line, after which it will be possible for the whole world to shout about Russian aggression and demand new sanctions against Russia, or perhaps the introduction of a peacekeeping contingent into the region. Given the fact that the army and the population of LDNR are hostages of the situation and have no room for maneuver, it can be easily assumed that in the coming months the shelling will intensify and deepen down to artillery raids on the central regions of Donetsk and Lugansk, and attempts to capture neutral territory early or late crowned with attacks on the position of the people's police.

However, the situation is dangerous not so much with the loss of certain territories that can be returned, but with the demoralizing influence it has on the military and civilians, as well as losses among fighters and civilians, many of whom have already become Russian citizens. Unfortunately, it must be admitted that the situation is at an impasse. Having no means of resolving diplomatic measures, sooner or later it will be necessary to resort to the military. The question is, why is this expectation associated with growing losses?

We are in Yandex Zen
A chain of pre-escalation events in LDNR and the Republic of Crimea prepares us for a big war.
Situational analysis of the death of the MH17 flight (Malaysian Boeing 777), made on the basis of engineering analysis from 15.08.2014
56 comments
Information
Dear reader, to leave comments on the publication, you must to register.