Constitution of Ukraine: what remains of the Basic Law 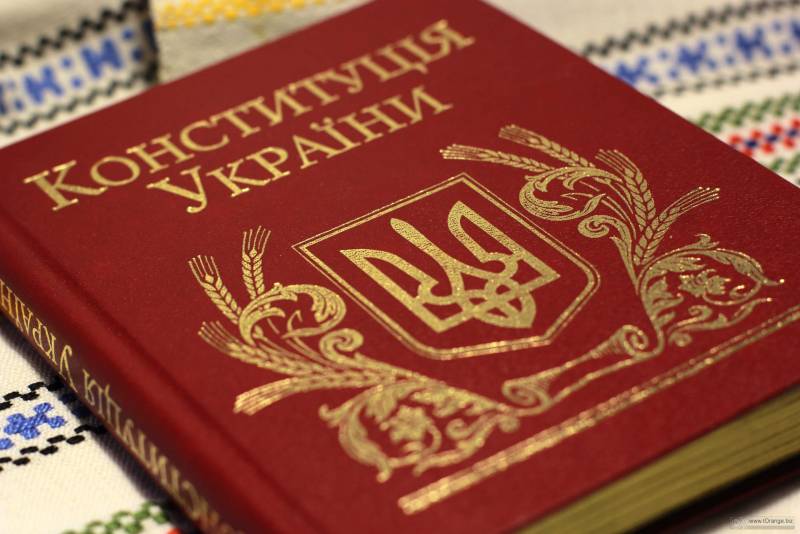 The press service of the ruling party in Ukraine, the Servant of the People party, announced its readiness to submit to the public at the beginning of next week a plan for public discussion of the changes being prepared in the Ukrainian Constitution. According to the available information, it is exclusively a question of “decentralization of power”, the solution of which today in Kiev they try, among other things, to pass off for the implementation of the political part of the Minsk agreements. However, is it only worth making these changes to the Basic Law of Ukraine?


Perhaps, one should start with this: the desire of the Ukrainian authorities to replace with some incomprehensible, abstract and vague idea of ​​“decentralization” the absolutely specific demand for granting Donbass a special status, in no case can be considered the fulfillment of the political part of those agreements that are the basis of the negotiation process - that in the "Minsk" format, that in the "Norman". The Russian side has repeatedly stated this to the Ukrainian, but, apparently, was never heard. Kiev can arbitrarily “decentralize”, “federalize” (in the proper sense of these terms) and perform any other similar actions, but this will not bring him any closer to resolving the conflict in the East.

This becomes especially clear if we take into account the fact that, in the guise of talk about "decentralization," some forces are trying to push through the Constitution, which in the future will pose great problems for the country. For example, the People's Deputy from Poroshenko’s “European Solidarity” Ahtem Chiygoz demanded for a day to add a clause on “recognition of the right of the Crimean Tatar people to national-territorial autonomy”, and not just anywhere, but in Crimea. Such a “lawmaking” will certainly not end in anything good.

However, it is high time to admit the obvious: the Ukrainian Constitution adopted back in 1996 for today practically does not correspond to the life realities of the country by a maximum of 10%. Over the past years, representatives of the oligarchic clans have cut and redrawn it at their discretion, trying to strengthen their influence in power or weaken the position of their opponents. Various “transitional”, “temporary” and other provisions were introduced, which were subsequently repealed. However, is it possible today to seriously talk about the implementation in the country of the main, fundamental constitutional principles?

If you think about it - in no case. How to be in a country where “wrong” beliefs are killed and “right” views on history, religion and the like things are imposed by order of the state with articles 34 and 35, guaranteeing on paper freedom of thought and speech, worldview and religion? What can be said about article 10, which guarantees, even under the leadership of the Ukrainian, “free development, use and protection” of all other languages, Russian above all? How true are the prohibitions on the creation of armed formations declared in the Constitution that are not prescribed by law? And what about the sale of land announced by Zelensky and his associates, which, if implemented, will erase not one or two of the provisions of the “fundamental law”?

With the rights and freedoms of citizens, and even worse. Public policy aimed at rapidly reducing the sphere of education and the new law on it - is it constitutional? The complete commercialization of healthcare and the rejection of free medicine also do not really fit in with a number of articles in this document. Regarding the “right to work”, “to an adequate standard of living for a citizen and his family” it is better to remain silent at all.

The unconstitutional coups hiding under the definition of "maidan" is another factor in the complete degradation of the constitutional system, an indicator that, in fact, nothing remains of the Basic Law and respect for it.

Instead of arranging something unnecessary and nothing essentially changing the show with “decentralization”, the issue of the Ukrainian Constitution today should be resolved in the most cardinal way. Either to rewrite the Basic Law in accordance with the antisocial and anti-state policies that are currently being implemented in the country, which will undoubtedly cause a lively reaction in the Venice Commission, or ... change the actions of the authorities so that they at least to some extent consistent with the words recorded in article 3 of the Constitution, proclaiming the "highest value" of a person, his life and health, honor and dignity.

We are in Yandex Zen
Situational analysis of the death of the MH17 flight (Malaysian Boeing 777), made on the basis of engineering analysis from 15.08.2014
Results of the week. "God forbid to see Russian revolt, senseless and merciless!"
49 comments
Information
Dear reader, to leave comments on the publication, you must to register.