How recruits appeared in Russia 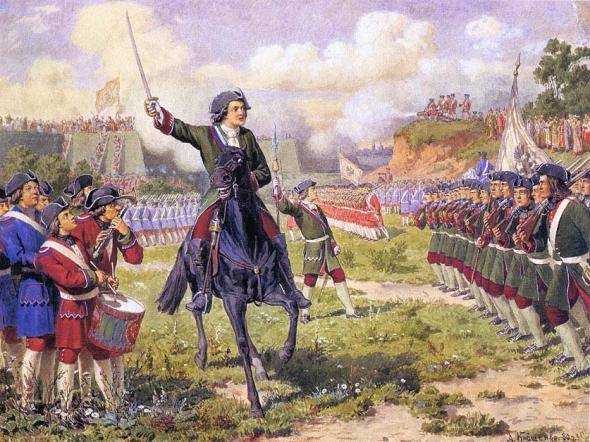 Aleksey Kivshenko, “War games of the amusing troops of Peter I near the village of Kozhukhovo.” 1882 year

315 years ago, on February 20 (March 3, according to a new style) in 1705, the Russian Tsar Pyotr Alekseevich introduced recruiting service, a prototype of universal military service. We did not come up with this system from a good life. Peter mobilized the entire Russian power and people to the Northern War - the confrontation with Sweden for dominance in the Baltic.

The first military experiments of Peter

Young Peter began to create his army with "amusing" regiments in the 1680s. They recruited both volunteers (runaway, free, etc.), and by compulsory principle (guys from the palace servants, bonded peasants). These regiments became the core of the Preobrazhensky and Semenovsky regiments, the future Russian guard. The officers were mainly foreigners; the service life for the soldiers was not determined. In parallel, there was an old Russian army — local cavalry, regiments of archers, soldier regiments of the new order, squadrons of gunners, etc. These troops were formed on a voluntary basis and received monetary and material rewards. The nobles were a service class, they were required to do regular service and they were called up during the war.

In preparation for the war with Sweden, in November 1699, Tsar Peter I issued a decree "On the admission to the Great Sovereign as a soldier of all kinds of free people." The new army was originally built on a mixed principle (like the first regiments of Peter). Free people were enlisted in the army and forcibly taken "subsistence" people - serfs belonging to landowners and monasteries. They took 2 recruits from 500 fit people. The recruit could be replaced by a contribution of 11 rubles. The soldiers took people from 15 to 35 years old. The soldiers were given annual salaries and provisions. During the recruitment of the “direct regular troops”, three divisions were formed. It was the beginning of regular cavalry - formed dragoon regiments.

Further events showed that such a system is imperfect. The protracted Northern War devoured many people, they were not enough. A large army was needed for military operations in the Baltic states and in the western direction (Poland). It is clear that more than 30 thousand recruits, which were recruited by decree of 1699, were not enough. There were few "free" ones. But the landowners and the church preferred to pay money; an adult worker was economically more profitable than a one-time contribution.

Therefore, on February 20 (March 3, NST) in 1705, Tsar Pyotr Alekseevich issued a separate decree “On the recruitment of recruits, from 20 yards per person, from 15 to 20 years of age”, which introduced a recruiting service in the country. Responsibility for the implementation of the decree rested with the Local Order, which was in charge of the service tenure in the country. The call was subject to single young people of all classes, including the nobility. But for the nobles it was a personal duty, and for the rest of the estates it was a community duty. Initially, the service was life-long. Conscription lasted in Russia until 1874. Recruitment sets were carried out irregularly by orders of the king, depending on the need.

Peter's methods were cruel, for example, before arriving at the duty station, each recruiting team lost up to 10% of its staff (dead, escaped, etc.), but effective and cheap for its time. For the first six sets, the army was replenished by 160 thousand people. This measure, along with others (Russification of command personnel, the creation of a system of officer and soldier schools, construction fleet, the development of military industry, etc.) gave its effect. In 1709, a radical change occurred in the war. The Russian army destroyed the "first army of Europe" near Poltava. After this, the losses of the Russian army in the war decreased, its combat qualities increased, and recruitment kits began to be reduced. The sixth set in 1710 was the last mass when they took one recruit from 20 yards. As a result, they began to take one recruit from 40-75 yards.

In 1802 (73rd recruitment), 2 out of 500 people took it. It used to be that recruiting recruits to the army were not carried out at all, the army did not require new soldiers. During wars, sets expanded. In 1806, in the conditions of the war with Napoleon, 5 out of 500 people were taken. In 1812, three recruitment recruits were conducted; in total, 18 out of 500 people were taken in a year. The empire had to set out 420 thousand souls in a year. The government also carried out the second mobilization in the eighteenth century (the first was in 1806), gathering up to 300 thousand warrior militias. And in 1816-1817. there were no common sets.

Gradually, military service began to encompass new population groups. So, if at the beginning the recruitment kits were conducted from the Russian Orthodox population, then later the Finno-Ugrians of the Volga region began to be recruited, etc. In 1766, the General Institution on the collection of recruits in the state and about the procedures that should be performed during recruitment was published. In addition to serfs and state peasants, recruiting conscription extended to merchants, domestic people, yasak, black-nosed, spiritual, people assigned to state-owned factories. The draft age was established from 17 to 35 years. Since 1827, Jews were taken into the army by soldiers. Since 1831, recruiting service was extended to “priestly children” who did not follow the spiritual line (did not study at theological schools).

Also, service life was gradually reduced. Initially served for life, while there was strength and health. At the end of the reign of Catherine the Great, from 1793, soldiers began to serve for 25 years. In 1834, in order to create a trained reserve, active service was reduced from 25 to 20 years (plus 5 years in reserve). In 1851, the service life was reduced to 15 years (3 years in reserve), in 1859 it was allowed to release soldiers on “indefinite leave” (dismissed in reserve) after 12 years of service. 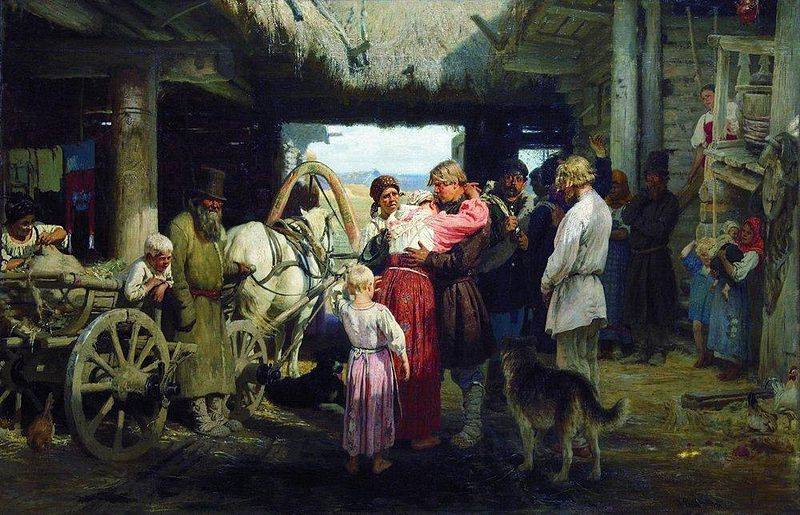 From the very beginning it was obvious that the recruitment system was causing damage to the country's economy. This was realized by many zealous owners. For example, the famous Russian commander Alexander Suvorov preferred not to give his peasants to recruits. He forced his peasants to take off for the purchase of a recruit from the side, he himself contributed half the amount (then about 150 rubles). “Then the families are not lounging, the houses are not going broke and the recruits are not afraid.” That is, the century of brilliant victories of the Russian weapons had its flip side. Millions of able-bodied hands were torn off from the economy, many folded their heads in foreign countries. But there was no other choice, it was necessary to mobilize the power and the people for a fierce confrontation with the West and the East. The empire was born in constant wars.

For ordinary people, recruitment was one of the worst disasters. At the age of 25, few went through the initial service. Major General Tutolmin noted:

“... the despair of families, the moaning of the people, the burdens of costs and the end in the continuation of a set of interruption of the economy and all industry. The recruitment time, according to the current establishment, is a periodic crisis of popular sorrow, and the inappropriateness of recruitment sets causes severe shock to the people. ”
The recruiter was not only difficult for the economy of the country and the peasantry, but had other shortcomings. The treasury incurred large expenses; it was necessary to maintain a large army in peacetime. The recruiting system did not allow having a large trained reserve, which was extremely necessary when drawing out and expanding the theater of war. No matter how great the army was in peacetime, but during the war it was always lacking. I had to carry out additional sets and put under the gun almost untrained people. In addition, due to the long service life, the accumulation of old soldiers took place. They were invaluable in terms of combat experience, but their health was usually undermined, their stamina is less than that of young soldiers. During marches, many soldiers lagged behind their units.

The big problem was the gradual narrowing of social groups affected by conscription. It was unfair. In 1761, Tsar Peter III issued a decree “On the Liberty of the Nobility”. Nobles are exempted from compulsory military service. She became voluntary. In 1807, merchants were freed from recruitment. Conscription did not extend to the clergy. There were territorial and national restrictions. The military burden of the empire was borne mainly by Russians and Orthodox, foreigners for the most part were freed from military service. As a result, the whole burden of military service and the wars of the empire fell on the working people (peasants and the lower classes). In addition, the soldiers were isolated from their previous lives, and after completing the service it was very difficult for them to find themselves in society.

All these shortcomings began to affect at the beginning of the XIX century. It is clear that many military and government officials saw and realized all this very well. Various reform projects have been developed. But in general, the government tried to act carefully, the main changes were associated with the service life, which was consistently reduced. In order to try to reduce the financial burden on the treasury, to create a “self-reproducing” army, under Alexander I began to create military settlements, where peasant soldiers were to be both soldiers and producers. However, this experiment did not lead to success. State economy did not work, it came to soldiers' riots. As a result, in 1874, the recruitment obligation was canceled and replaced with universal military duty. 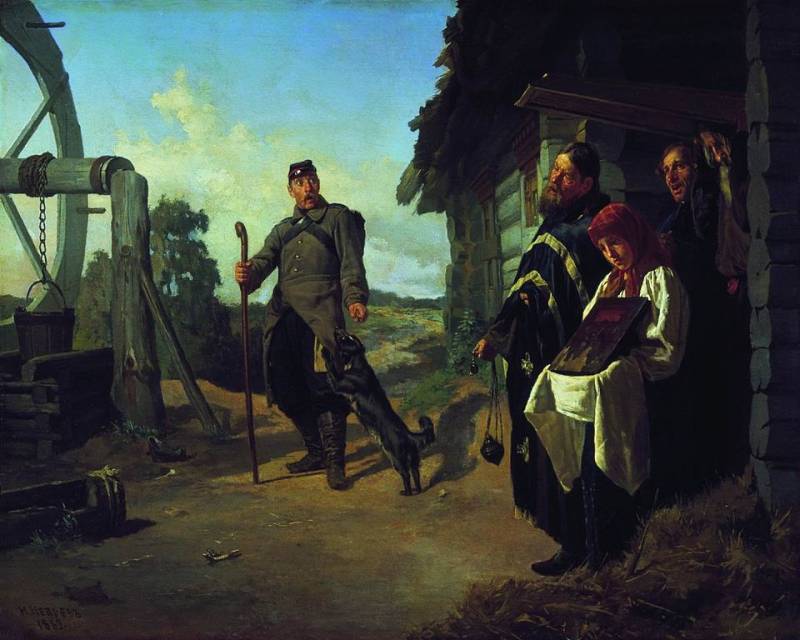 Nikolay Nevrev. The return of the soldier to his homeland. 1869

We are in Yandex Zen
Recruits against Napoleon
The military commissars of Peter I
44 comments
Information
Dear reader, to leave comments on the publication, you must to register.