July 25 2012
32
The idea of ​​unifying automatic rifle armament of a platoon and branch on the basis of a single system in the USSR was worked out in 20-s under the guidance of Fedorov, and after adopting an intermediate cartridge of the 1943 sample of the 7,62 mm caliber, they took a clear direction to choose and refine the base sample for further unification. As a result, the Kalashnikov assault rifle became one after its modernization. In 56, several light machine guns and “light” machine guns were tested - the Kalashnikov (Izhevsk), Konstantinov (Kovrov), Korobov (Tula) systems were presented at the competition, and the power supply of the Korobov machine gun was band. In 59, the AKM assault rifle was adopted by the USSR Army, and in 61, the RPK light machine gun (product index 6P2, “Kalashnikov light machine gun”) created on its base was adopted. 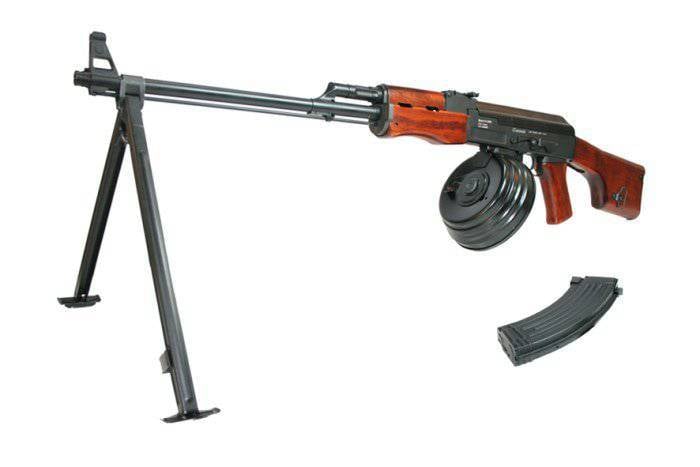 PKK on the device is almost the same as an automaton, their components and parts are mostly interchangeable. The main differences are the elongated heavy barrel, folding bipod and a regular store of larger capacity. The barrel, whose length is 590 millimeters, allowed to increase the effective firing range to 800 meters. Increasing the capacity of the store and increasing the wall thickness of the barrel allows more intense fire. When shooting from the stop bipod improved accuracy.

In automation, a scheme for the removal of powder gases through a side hole made in the barrel wall is implemented. By turning the shutter, the barrel is locked, while a pair of combat protrusions of the shutter go into the grooves of the receiver. The gas piston and the stem with the slide frame are rigidly connected. The bolt frame is the leading link in automation: the frame sets the direction of movement of the moving parts, most shock loads are perceived, the return spring is placed in its longitudinal channel. The reloading handle and the slide frame are made at the same time and located on the right. During the shot, the powder gases move into the gas chamber, the bolt frame and the gas piston begin to move backward. After the frame moves to the required distance, the exhaust gases are released into the atmosphere through the openings in the gas tube. The bolt frame passes a certain distance until the pressure drops, after which the bevel made on its inner surface presses on the protrusion of the bolt with its face and rotates it. When the shutter is unlocked, a preliminary rotation and “stragging” (displacement) of the sleeve located in the chamber occurs. This allows you to reduce the adhesion of the sleeve and the walls of the chamber, and also prevents its rupture during subsequent extraction. After the shutter and receiver are disengaged, the spent sleeve is removed by a spring-loaded ejector. The shutter with the shutter frame begins to move backward, cocking the trigger and compressing the return spring. Shooting sleeve after hitting a hard reflector receiver, flies through the window of the receiver to the right. Having reached the rear extreme point, the bolt and bolt carrier under the action of the return spring move forward, the next cartridge is captured by the bolt and sent to the chamber. The bolt frame stops moving, and the bolt continues to move forward under the action of inertia, turning along the bevel of the frame, locking the bore. The relatively large weight of the bolt frame with a relatively light shutter, as well as the “hung” position in the receiver of moving parts with relatively large gaps made it possible to ensure the operation of the system even in dusty conditions. In addition, the shutter is covered with a shutter frame, thus providing protection against clogging and shock. The back emphasis of a directing core of a return spring is a latch of the stamped easy receiver cover. 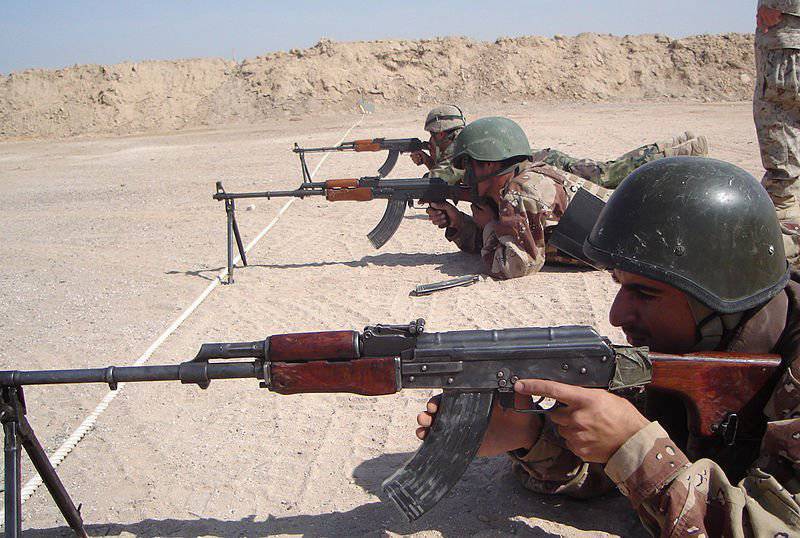 Trigger drum mechanism with a trigger, rotating on an axis and a U-shaped combat spring, which is made of double twisted wire. The device trigger allows you to conduct a single and continuous fire. The single turning part is a translator (switch) of fire modes and double-acting safety lever: when in protection position the trigger is locked, it whispered continuous and single fire and prevents the slide frame from moving backwards, partially blocking the groove between the receiver cover and receiver. In this case, the bolt may be retracted for inspection of the chamber, but its stroke is not enough to coax the trigger and send the next cartridge to the chamber. All parts of the firing mechanism and automation are compactly mounted in the receiver, which thus plays the role of the trigger box. The receiver was made by punching, some parts were made by investment casting and powder metallurgy.

Experienced light machine guns had a slightly modified butt of the machine gun, however, for a serial sample, the form of the stock of its predecessor was taken - the RPD machine gun. During firing from the stop, the refined neck of the butt gives you the opportunity to cover it with your left hand. The sight has a mechanism of lateral corrections to the movement of the target or to the wind. Firing from the stop made it possible to do without a compensator. The store supply system inherited from the machine forced the development of larger-capacity stores - sector box-shaped 40 with cartridges and drum (disk) 75 with cartridges. RPK and automaton shops (30 ammo capacity) are interchangeable. 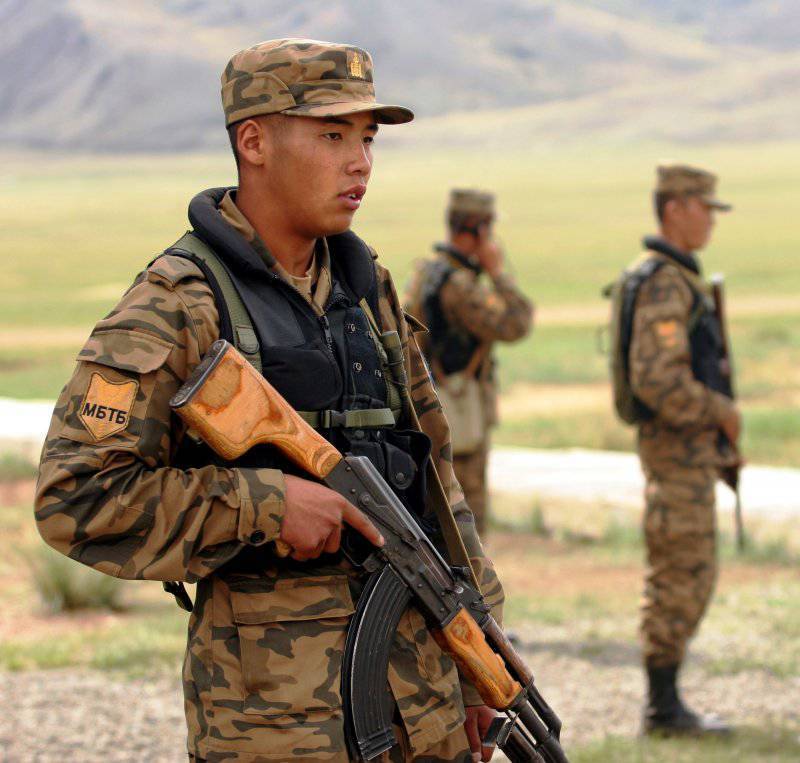 For firing, several types of cartridges can be used: with an ordinary PS bullet having a steel heat-strengthened core (7,9 bullet weight, 57Н231 cartridge index), T-45 tracer bullet (7,45-7,67 bullet weight, the head part is painted green color), an armor-piercing incendiary “BZ” (7,47-7,87 bullet weight is grams, the head part is painted black and has a red belt), incendiary (6,47-6,8 bullet weight is grams, the head part is colored red). The mass of the cartridge having an ordinary bullet is 16,2 grams, and the charge of the powder 1,8 grams. The fire can be carried out from the bipod or hands with the emphasis of the butt in the shoulder. Shooting from the hip belt is allowed in motion - it does not give aim, but at a certain point in the battle it can have a psychological effect on the enemy, which explains the preservation of this method from the First World War to the present. A shot from a closed bolt does not increase the risk of spontaneous shot as a result of heating of the chamber if the fire is fired in short bursts.

For the Airborne Forces, they developed a model of RSCS with a butt of the same shape that is collapsing to the left. Folding butt in the combat position is fixed with a special latch. As a result, the RPCS was heavier than the PKK on 0,3 kg. Modifications for the PKKN and SSBN, respectively, were made for the RPK and SSBK machine guns, respectively, which were adapted to set up a night sight. Machine guns PKK and RKSKS steel weapons support airborne (motorized rifle) department. In some conflicts, the PKKN equipped with an optical sight was used as the “ersatz” of a sniper rifle - this was possible due to the fact that the light machine gun inherited the single-fire mode from the base machine gun. 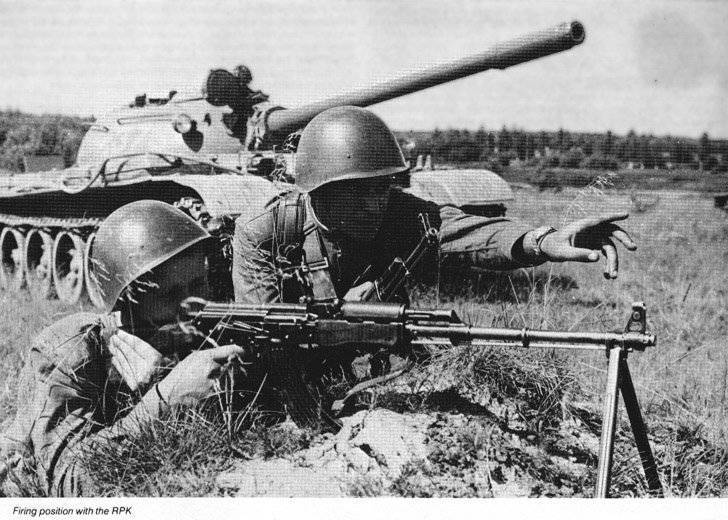 The wide unification of parts and assemblies with AKM already mastered in production has greatly simplified the production of the RPK light machine gun, as well as its study in the troops (especially since the Kalashnikov assault rifle system is one of the easiest to learn and study). Important is the ease of repair, disassembly and care. Reasonableness, technological and constructive finish, a kind of elegance and comparative simplicity of the scheme with a wide application of the principle of multi-functionality of parts led to high reliability of work in any conditions. Vyatskopoljansky Machine-Building Plant "Molot" became the main producer of the PKK.

Designers K.T. Kurenkov and N.F. Makarov on the basis of the RPK has developed a "curvilinear" tank a machine gun having a deviation of the bullet trajectory by 90 °, but it was not accepted, although subsequently they tried to use these machine guns in caponier installations. During the landslide conversion, the Molot factory produced the Vepr hunting carbine based on the RPK light machine gun. After several years of development, this unique example of transferring machine guns to the hunting region gave an excellent result.

The PKK light machine gun was adopted in the armies of more than 20 countries. In some countries, its variants or copies are made. For example, in Yugoslavia, the Kalashnikov system 72В1 machine guns were produced under the cartridge 7,62X39, which was distinguished by the introduction of the ribbing and 72АВ1 with a metallic butt on the part. The export version of the 77B1 machine gun under the NATO cartridge 7,62x51 was equipped with a box magazine of a different shape and a carrying handle. Together with the 80 and 80A assault rifles, the 5,56X45 (M193) family of weapons produced a 82 model machine gun with a fixed butt and a 82A folding, both models had a carrying handle. In turn, the Yugoslav machine guns were delivered to some countries - for example, the M72B1 got into Iraq. Chinese copies of Type 73 and 81, retained the general scheme of the PKK light machine gun, however, they have a number of differences. In Finland, the machine gun made M78 "Valmet".