Thousands of kilometers of tracks and obstacles. "Athlete" is being tested 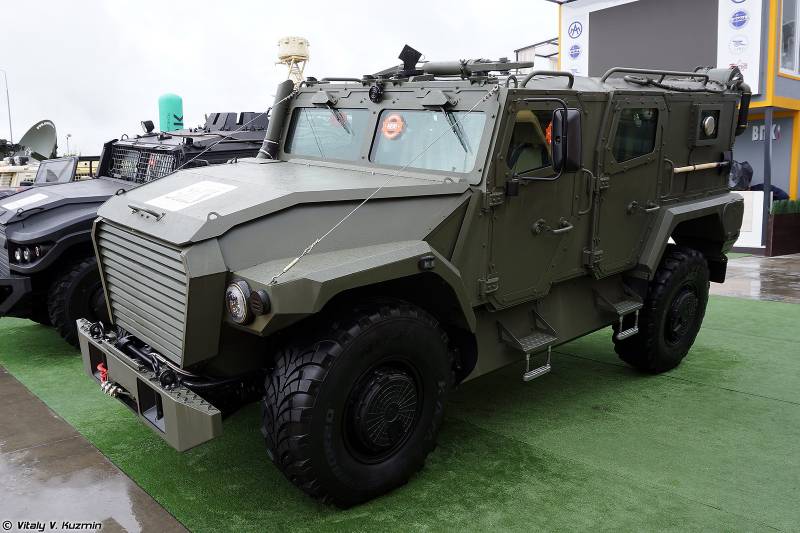 Experienced Athlete in a Multipurpose Configuration

In recent years, our country has developed a number of promising armored vehicles for various purposes. The main creator of such equipment is the Military Industrial Company, and its main novelty now can be considered the Athlete machine, which was first introduced last year at the Army 2019 forum. Currently, this armored car is undergoing various tests.

During the first open display at the exhibition, it was stated that the prototypes of the Athletes would be tested in the very near future. Soon, the "military-industrial complex" clarified the timing of these events. Preliminary tests began on August 5. At this stage, the prototypes of the armored car in two versions — the special ASN and the multi-purpose AMN-2 — were to be tested.

The tests were held with the participation of representatives of the armed forces, research organizations and units from the military-industrial complex. The basis for the events was the training centers of the Scientific Research Center for Automotive Engineering in Bronnitsy, the Scientific Research Institute of Armored Vehicles (Kubinka) and the US.

First of all, the running characteristics of the equipment were checked. Experienced Athletes traveled thousands of kilometers on various routes of various kinds and with various obstacles. The behavior on water barriers was investigated. Also checked the performance in the entire range of specified climatic conditions. 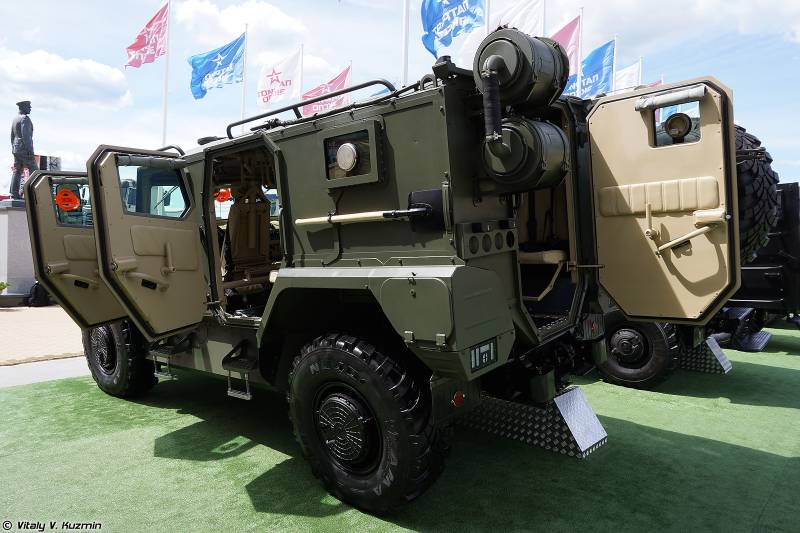 As part of these tests, checks were made on the level of protection of the armored car. To confirm the claimed characteristics, it was planned to conduct tests of shelling and detonation.

At the end of November, the Zvezda TV channel showed the next issue of the Military Acceptance program called the Athlete Armored Car. The hero on wheels. " It showed interesting shots from running, climatic and other tests of experimental equipment carried out in previous months.

In early December last year, the TASS news agency, citing the VPK press service, revealed details of ongoing work on the Athlete. At that time, part of the activities was completed, and the start of new ones was expected.

At that time, the development company was completing preliminary tests of the armored car. One of the prototypes was disassembled in order to study the technical condition and refinement of the structure. The condition of the second was not specified, but his further fate could be unenviable. For November-December, tests of this prototype were planned to be fired and detonated, aimed at determining the real level of protection. 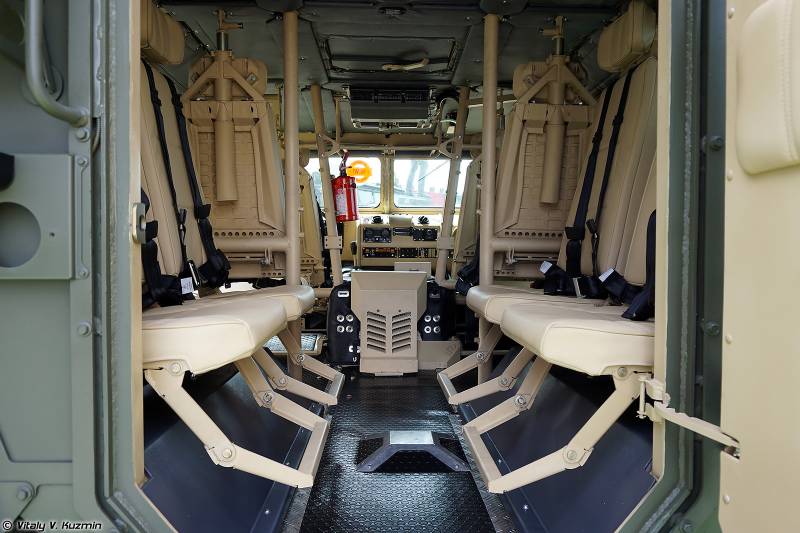 The interior of the five-door armored car
After these events, the military-industrial complex was about to begin preparations for state trials. The start of this phase was outlined for spring. It was planned to conduct events with the help of the first prototype. By the beginning of the tests, it should be assembled back with the restoration of technical readiness and design improvements according to the test results.

February 21, the press service of the military-industrial complex and TASS reported on testing the protection of the armored car. At the training ground of one of the research organizations, an experienced Athlete was blown up, fired upon, and other influences typical of a combat situation.

As part of these tests, the car was fired using ammunition corresponding to the calculated level of protection, and explosions were carried out under the vehicle and next to it. Also tested the resistance of the armored car to arson using a fire mixture. An experienced “Athlete” completed all the checks and confirmed the calculated characteristics.

"VPK" specified indicators of armored car protection. Ballistic protection is able to withstand the hit of a 7,62 mm armor-piercing rifle bullet. Mine protection saves the crew from 2 kg of TNT under the wheel or underbody. Such characteristics will not allow attributing the "Athlete" to the class of MRAP, but distinguish it from the previous "Tiger". Compared with the latest level of protection, "Athlete" is many times higher.

The development company reports that the Athlet project is being finalized in accordance with the comments of the Ministry of Defense made on the basis of preliminary tests. At the same time, the technical readiness of experienced equipment is being restored, which will again go to the landfill. 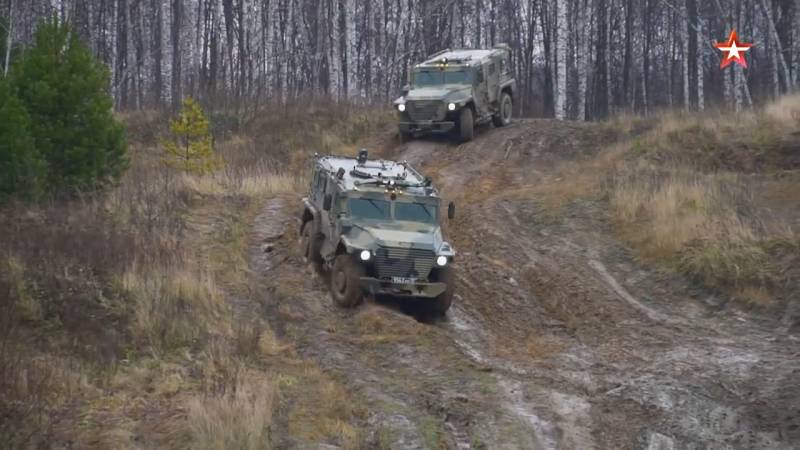 State trials of the "Athlete" will begin in May. The timing of their completion has not yet been specified. Previous events in the framework of this project suggest that the main activities will be completed by the end of the year. The armored car will have to reaffirm its characteristics, and after that the issues of adoption into service will be decided.

The developer company believes that the armored car "Athlete", having confirmed its characteristics, will be able to find application in the Russian army or in power structures. Also, such a machine may be of interest to foreign countries.

The Athlete project proposes the construction of a biaxial multipurpose armored car capable of transporting people and goods or carrying special equipment. The armored car is considered as an addition or replacement for the existing "Tiger", which is characterized by increased characteristics - primarily protection.

At the moment, there are two versions of the “Athlete” with a different design of the armored hull. The case with bulletproof and anti-splinter protection can have a set of three or five doors. The three-door ASN car is considered as a special vehicle, the five-door AMN-2 as a multi-purpose one. In terms of protection, both modifications are identical. 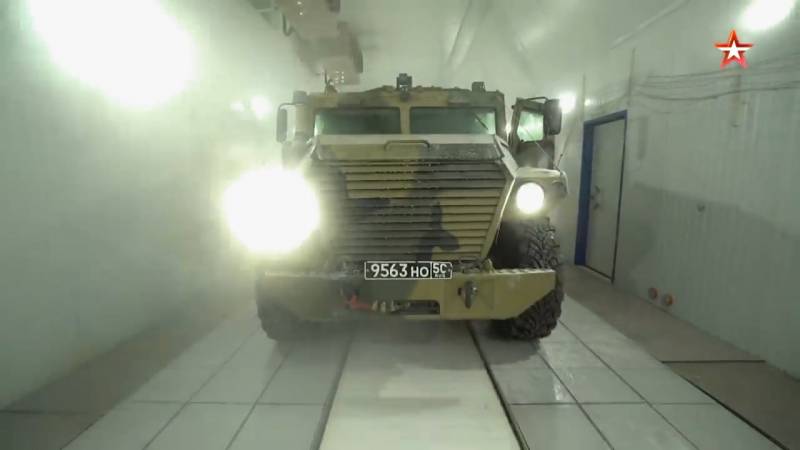 Climatic tests of equipment
The payload of the car is 1600 kg with the possibility of bringing up to 2500 kg. The habitable compartment holds up to eight people, including the driver. All cab configurations include a front row of seats with driver and commander seats. The placement of the remaining fighters may be different. For example, the AMN-2 modification provides for two seats near the rear side doors and several seats in the rear of the cab. The landing can use personal weaponusing loopholes in the glazing.

The armored car is equipped with the Yaroslavl diesel engine YaMZ-5347-24 power of 240 hp The transmission provides four-wheel drive. Machine weight approx. 9 t develops on the highway a speed of at least 120 km / h, range - 1000 km. It was previously mentioned that in the future, “Athlete” can get a new more powerful engine. As a result of this, the main characteristics will grow, including carrying capacity.

"Athlete" is a universal platform suitable for the installation of various equipment or weapons. On the roof can be mounted remotely controlled combat modules of different models with one or another weapon - at the request of the customer. In the future, the appearance of specialized modifications with special equipment. Mentioned the possible development of a civilian version of the chassis.

It is not known whether the Athlete will be able to get into service, although the situation as a whole is optimistic. It is also not yet clear which structures and units will receive this technique. Earlier, the leadership of the "military-industrial complex" noted that the new armored car will complement the existing "Tiger" and will solve other problems. At the same time, company representatives talked about the possible replacement of the Tiger with a new model, but the exact date was not given.

Apparently, the real future of the promising armored car will be determined a little later. Now the main task of the Military-Industrial Company, the Ministry of Defense and several organizations from its structure is to fine-tune the design and conduct state tests. These events will take several months - and soon new messages on the progress of the project may appear.

We are in Yandex Zen
Armored T17 and T17E1 (USA). Similar names and different fates
Armored cars of Sweden. Part II
63 comments
Information
Dear reader, to leave comments on the publication, you must to register.