"Wrong" Ukrainians and the Euromaidan virus 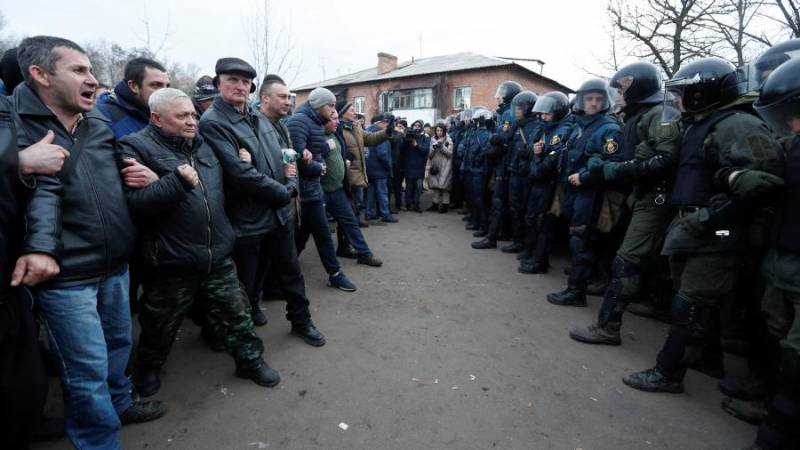 The riots in several Ukrainian regions led to the evacuation of citizens from China due to the spread of coronavirus. Residents of the western regions of Ukraine were especially “distinguished” - those where the most missed moods are the most.

Exactly six years ago, in February 2014, the coup d'état in Kiev won. The lawful president, Viktor Yanukovych, was removed from power by force and threatened to flee the country. Yes, many have the question: what kind of president is he who can be intimidated and forced to leave the country that he was obliged to defend? You can look at this problem from the other side: he did not want large-scale bloodshed. Unfortunately, this idealistic position is characteristic of many state leaders who find themselves in a similar position. But often the resignation of the ousted president leads to the fact that the blood flow does not stop, and the situation only worsens many times. As it happened with the "nude" and the territories, whose inhabitants rebelled against the coup and are no longer Ukraine.

Now, for six years now, we have heard from politicians of a different spectrum and level the same mantra that Ukraine should regain the territories that have fallen away from it - the Crimean peninsula, the Donetsk and Lugansk people's republics. Often this is spoken of with undisguised anger towards the inhabitants of these republics, who dared to have a different opinion about the events of black February 2014. This was especially characteristic of the associates of the former illegal president Petro Poroshenko. Under Vladimir Zelensky, the rhetoric of Kiev has changed a little: they say that Crimea and the Donbass are part of Ukraine and they must be integrated peacefully. Zelensky even spoke out at the recent Munich conference in the spirit that he had ended the war in his own brain (although it should be noted that the actions of the Ukrainian authorities indicate the very opposite).

What was done with the returning particle

And a piece of Ukraine returned to their homeland. No, not Crimea, not the DNI, not the LC. Ukrainian citizens returned from China. Forty-five people (and another 27 foreign citizens). And then it became clear how in a country that claims to be a champion of humanistic and democratic values, they return.

Society was not at all happy about the return of this particle of Ukraine home. Instead of sympathy, solidarity and support, people expected ... stones. The panic even occurred despite the fact that people with a temperature on board the plane that carried out the evacuation were not allowed.

Until the last moment, the Ukrainian authorities did not announce where exactly they would bring people and in which region they would be placed in quarantine for two weeks. But the protests against the arrival of compatriots began mainly in those regions where residents six years ago actively supported the euromaidan: in the Lviv, Ternopil and Kiev regions. Moreover, not only ordinary rioters, but also regional authorities, as well as doctors, expressed their disagreement to shelter citizens who returned to their homeland.

One of Poroshenko’s associates, the ex-governor of the Lviv region Oleg Sinyutka (now a deputy from the European Solidarity), agreed that the placement of these people in the Lviv region would be the revenge of the authorities for a “pro-Ukrainian position”. He called such a vote for Poroshenko in the presidential election. And in the Ternopil City Council they said that the evacuation of fellow citizens is "the genocide of the Ukrainian people." Social networks were filled with calls to send people to the East or even to Chernobyl.

In the end, the authorities decided to place the evacuated in the sanatorium of the National Guard of Ukraine "New Sanzhary" in the Poltava region. However, the path of these people from the Kharkov airport to the sanatorium was darkened by no means a warm meeting. Tires caught fire on the way of the bus, it was stoned, a window was broken. As a result, the car still delivered citizens to the quarantine site, but there are victims of the riots.

We can say that this panic was organized only by separate forces, and the Ukrainian authorities just supposedly met compatriots in a human way. Yes, Zelensky is trying to save face, to call those who are displeased to conscience. In his Telegram channel, he pointed out that among the evacuated people, mainly young people under 30, that is, they are “almost like children”. Zelensky also noted that the protests showed "not the best side of the character of the Ukrainians."

The strana.ua publication quotes one of the passengers of a long-suffering bus: “I didn’t think that our country is so rotten”. Well, the diagnosis was made very accurately: after the "Euromaidan" part of the Ukrainian society turned into such a rotten mass. They can beat a woman for the Russian language. They can tear the St. George ribbon from the baby’s chest. They can tear down a monument to the liberator of Odessa without a twinge of conscience, and even kick it. And they can demonstrate to compatriots in trouble that they are “wrong” Ukrainians and their place in the Chernobyl zone.

Such a society cannot be called healthy. It hurts. It is infected with the Euromaidan virus, and only a few dare to oppose it.

By the way, residents of Donetsk and Lugansk people's republics write on social networks that people would be accepted there in a civilized manner. If the Donetsk airport worked, which by the grace of the same Euro-Maidan has existed for almost six years only in the form of ruins ...

We are in Yandex Zen
A great interview with Sergey Lavrov: about Ukraine, Obama and Iran
What you didn't want to know about England
116 comments
Information
Dear reader, to leave comments on the publication, you must to register.