Stenovizor. SWAT will see through the wall 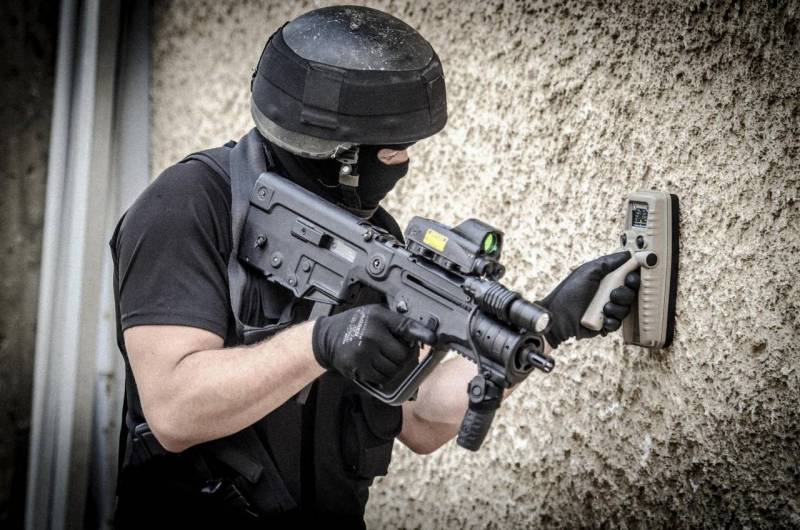 The special forces are armed with various instruments and devices for solving special problems. One of them may be the so-called. stenovizor - a special system that can detect and identify the enemy behind a particular obstacle. Such devices appeared not too long ago, but they are already gaining a certain distribution and help fighters in the preparation of operations.

Preparation for various special operations is always associated with the collection of information about the enemy, his location and capabilities. In some situations, reconnaissance may be difficult or impossible due to the presence of various barriers - walls of buildings, floors, etc. Devices of the stenovizor class are designed to provide intelligence in such conditions.

A stenovizor or tactical reconnaissance / penetrating vision device is a special kind of radar. Low-power radars and related devices are housed in a compact housing suitable for carrying and rapid deployment. Such products are intended for use in various buildings in order to study the situation beyond the barriers. Some stenoizors can also work in GPR mode. 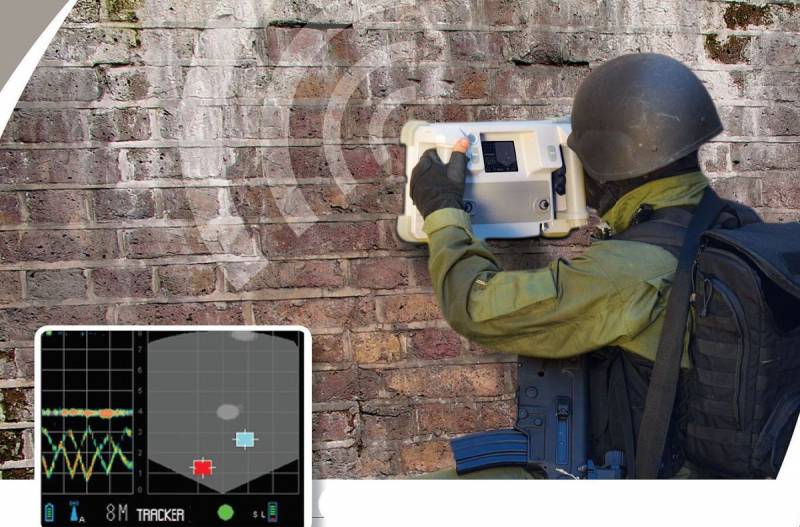 Demonstration of the Xavero 400. At the bottom left - the device interface in one of the modes. Photo Camero Tech Ltd. / camero-tech.com
The compact radar of the centimeter range (2-10 GHz) is capable of “shining through” walls or other objects and with high resolution is able to detect movement in the after-space. Due to the sophisticated signal processing algorithms, living creatures are detected in the volume under investigation, incl. with the selection of people moving or motionless. Objects give themselves out by any movements - in particular, a motionless person is detected by breathing.

With the help of a stenographer, special forces soldiers can study the situation, determine the size and location of the enemy or third parties, clarify the layout of the structure, etc. All this simplifies the preparation for the battle and increases the likelihood of a successful solution of the tasks. In addition, unlike a number of other means of reconnaissance, a stenovizor can be used in any conditions and gives itself out only with weak radiation, the detection of which is not easy.

The first serial wall-mounted imagers appeared and became widespread in foreign countries. Camero Tech Ltd., an Israeli company, offers customers a line of Xaver instruments. At the moment, it includes three wall imagers with different characteristics and capabilities, as well as a communication and control system for their more efficient use. 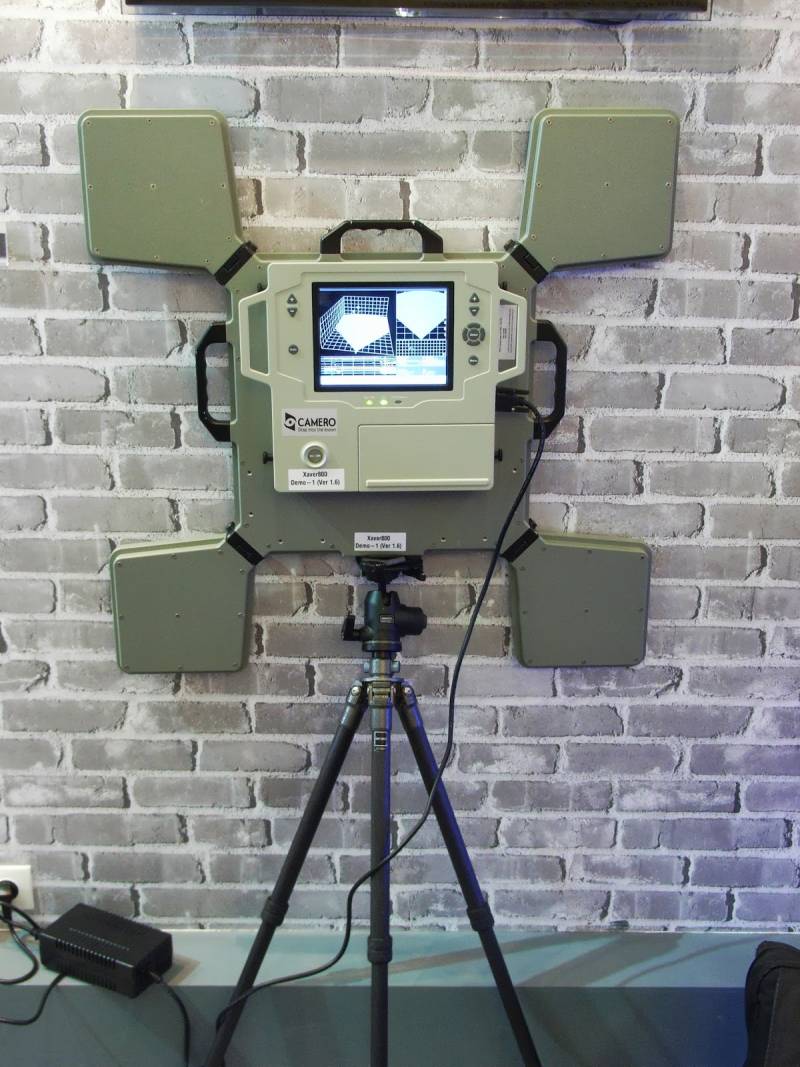 Xaver 800 in working position. The screen shows a three-dimensional model of the room behind the wall. Photo Camero Tech Ltd. / camero-tech.com
The smallest and lightest in the line (22 x 10 x 7 cm, 660 g) is the Xaver 100 wall imager. It is made in the form of a small device with a handle for carrying and operating. The front side has a screen and controls, the locator antenna is placed on the back. The possibility of observation through walls of various materials used in construction is claimed. The maximum observation range is 20 m. There are operating modes that provide for the study of the situation, the identification of dangers, the search for places to make passes, etc.

The larger and heavier Xaver 400 (37 x 23 x 12 cm, 3,2 kg) has a different radar and an expanded set of functions. In particular, it provides the calculation of the tracks of moving objects, the identification of stationary targets, etc. Information is displayed in several modes. It is also possible to transfer data to a remote control.

The largest representative of the family is the Xaver 800 wall-mounted imager. It features a large antenna device of a characteristic shape and is mounted on a tripod. The presence of several separate locators with antennas allows not only to study the space behind the barrier, but also to form a three-dimensional picture. In other functions, the Xaver 800 is similar to the Xaver 400. 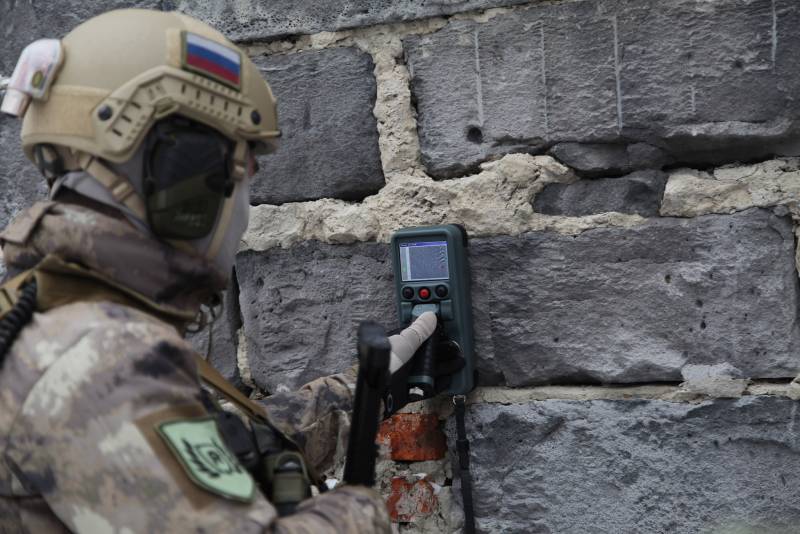 Russian device RO-900. Photo "Logis-Geotech" / stenovizor.com
An Xavernet control system is available for use with Xaver 100 and 400 products. This is a special tablet computer with communication tools that allows you to integrate wall scanners into a network and use them together by one operator. Xavernet allows you to quickly deploy a whole set of surveillance that increases the situational awareness of the unit.

Due to the interest from various services and organizations, Russian enterprises have begun to develop their own wall-vision cameras, and some of these devices are already on the market. Some of them have reached exploitation in law enforcement agencies and are receiving good reviews.

An example is the products of Logis-Geotech. The catalog of its products contains a manual radar detector RO-900 - an analogue of the Israeli Xaver 100 with a similar form factor. This is a compact and lightweight device with the ability to detect people behind various materials at ranges of at least 15 m. In the GPR mode, the RO-900 “shines through” at least 500 mm of soil.

A two-channel device RO-400 / 2D is produced, made in the form of a connected control panel and antenna unit. If necessary, they can be carried up to a distance of 50 m and connected by cable. The RO-400 / 2D operates at ranges of at least 21 m behind a 600 mm wall. In the GPR mode, the depth of action reaches 5 m. 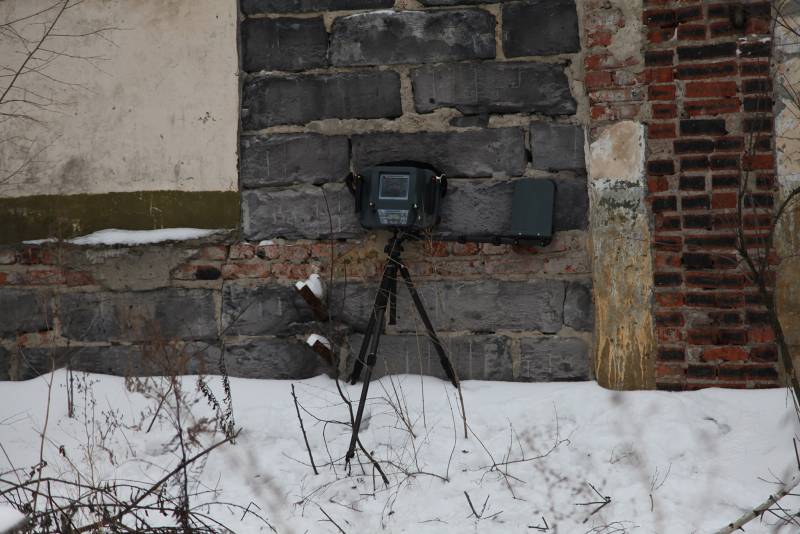 PO-400 in working position. Photo "Logis-Geotech" / stenovizor.com
The Moscow enterprise Mercury-Pro collects wall-cameras of the Dannik series developed by the Special Equipment and Communication NGO. Two portable and portable products are presented - analogues of the RO-900 and RO-400 / 2D or Xaver 100 and Xaver 400. The goal of these projects, as stated earlier, was the development of advanced technologies and the creation of devices that could compete with foreign products.

"Cross vision" radar detectors are intended for various special forces from the armed forces or law enforcement agencies. Also, such devices may be of interest to rescuers. Foreign security forces began the development of wall-mounted visionaries quite a long time ago, and several years ago a similar process began in our country.

So, in 2014, the Ministry of the Interior placed an order for 36 wall-cameras of two models from the Dannik line. The total purchase value exceeded 60 million rubles. The corresponding contract was concluded in September 2014. On time, the customer received the required devices. Which unit received the stenographers was not specified. 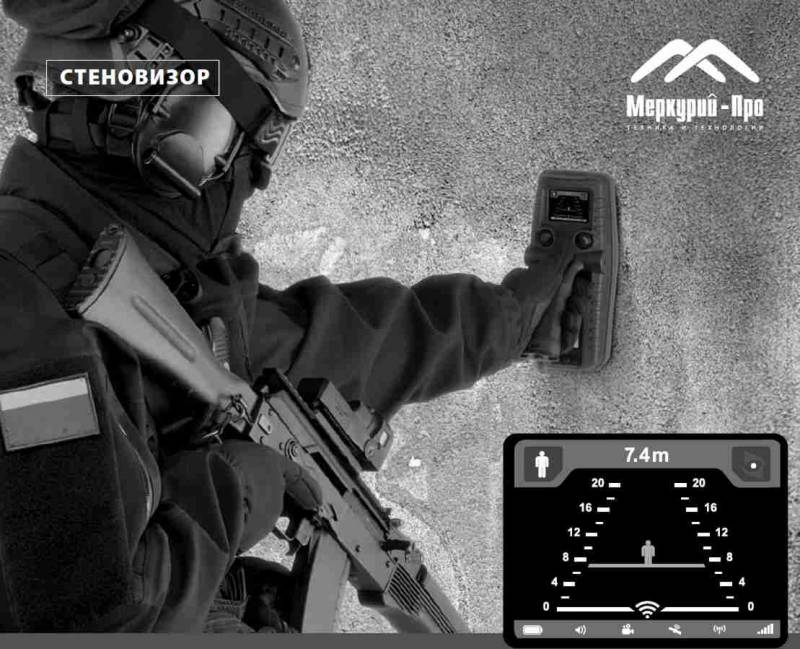 The fighter with the stenographer "Dannik". Photo "Mercury-Pro" / mercury-pro.ru
In November 2016, it became known about the completion of the tests of the RO-900 wall imager by Rosguard specialists. In the near future a large order for the supply of such devices was expected. The first deliveries took place in the next 2017. To whom wall-visionaries were intended, it was not called again.

In November last year, the special equipment “Saturn” of the Federal Penitentiary Service received new equipment. This organization preferred foreign equipment and purchased Xaver 400 radar detectors. Apparently, the FSIN specialists were interested in an advantageous combination of small dimensions and all available functions.

Stenovizorov allow to conduct supervision through various obstacles. This dramatically increases the situational awareness of the unit and positively affects the effectiveness of its work. The advantages of such equipment are obvious, and therefore special forces from different countries seek to get it at their disposal.

Interest from customers is an incentive for manufacturers, which leads to the emergence of new designs - with one or another difference and advantages. Modern designs are not without some drawbacks, and developers are trying to improve them and introduce new solutions. It should be expected that in the future the number of wall-mounted monitors in the market will increase, while the number of their operators will increase in parallel.

We are in Yandex Zen
Fighting robots in future wars: expert conclusions
Overview of combat night vision systems from Western manufacturers
12 comments
Information
Dear reader, to leave comments on the publication, you must to register.