NASA is preparing a replacement for Concord and Tu-144 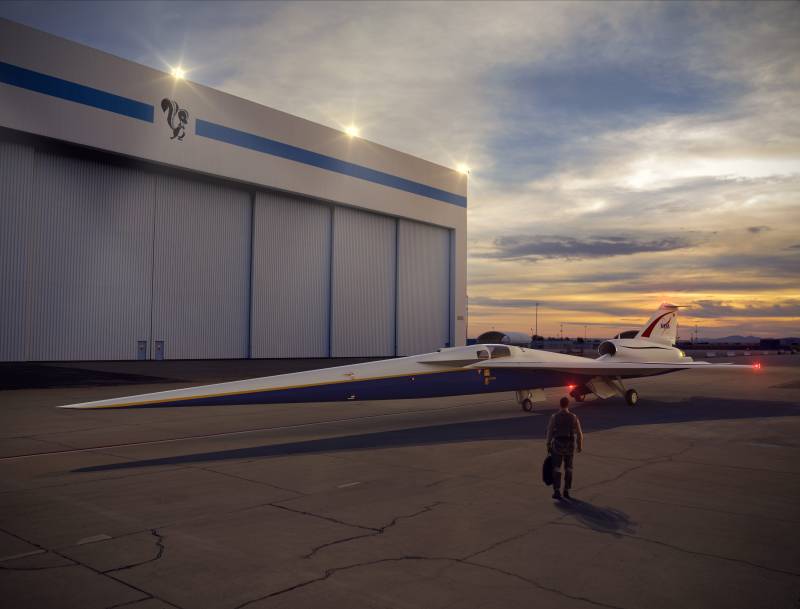 At the end of December 2019, the American media appeared news that the assembly of the experimental X-59 QueSST aircraft will be completed before the end of 2020, and already in 2021 the first flight of a unique aircraft can take place. The uniqueness of the project lies in the fact that the X-59 QueSST aircraft will be able to switch to the “silent” mode of supersonic flight. According to the developers of the company Skunk Works (Lockheed Martin division), the noise level when breaking the sound barrier will not exceed the sound of the car door being closed.

В stories world aviation there were only two serial supersonic passenger aircraft. This is the Soviet liner Tu-144 and the English-French Concorde. After the operation of the latter was completed in 2003, all passenger aircraft in the world are represented only by subsonic airliners. It seems that very soon the situation may change. 17 years after the completion of the Concord’s operation, the topic of supersonic passenger flights again becomes relevant. And in the US, NASA is ready to invest hundreds of millions of dollars in projects designed to improve the capabilities of such aircraft.

Work on the project of a new aircraft, designated X-59 QueSST (Quiet Supersonic Transport), started in 2016. The aircraft is being developed as part of a collaboration between the US National Aeronautics and Space Administration (NASA) and Lockheed Martin Corporation. Important clarification: X-59 QueSST is not a prototype of a passenger aircraft, it will never carry passengers in the future. This is an experimental aircraft, a technology demonstrator, which is being created as part of a specific task to reduce the noise level of supersonic aircraft. 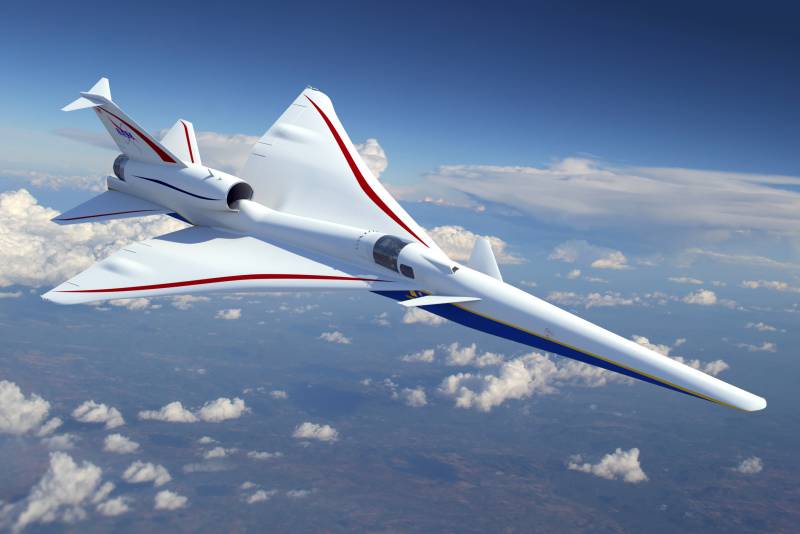 Currently, the United States has restrictions on the flight of supersonic aircraft over populated areas, primarily because of the high noise level. The new aircraft should solve this problem and contribute to the revision of the established rules, giving such passenger liners a second chance.

As it became known at the end of December 2019, the project for the creation of the X-59 QueSST aircraft reached the finish line. It is planned to complete the assembly of the machine before the end of 2020, and the first flight of the experimental aircraft may take place in 2021. In this case, in the future, the experimental aircraft will specifically fly over populated areas. During such flights, noise data will be taken from the ground, as well as surveys of local residents will be conducted to find out their reaction to sound shock and the noise level published by the X-59. The first tests are planned in the Mojave Desert in California, where a whole network of sensitive microphones with a length of almost 50 kilometers will be installed on the ground.

It is known that the assembly of the aircraft is carried out at the Skunk Works company in Palmdale, California. The total cost of the project is open and amounts to 247.500.000 dollars. NASA emphasizes the fact that the X-59 QueSST is the company's first manned pilot aircraft (X-plane) in three decades. 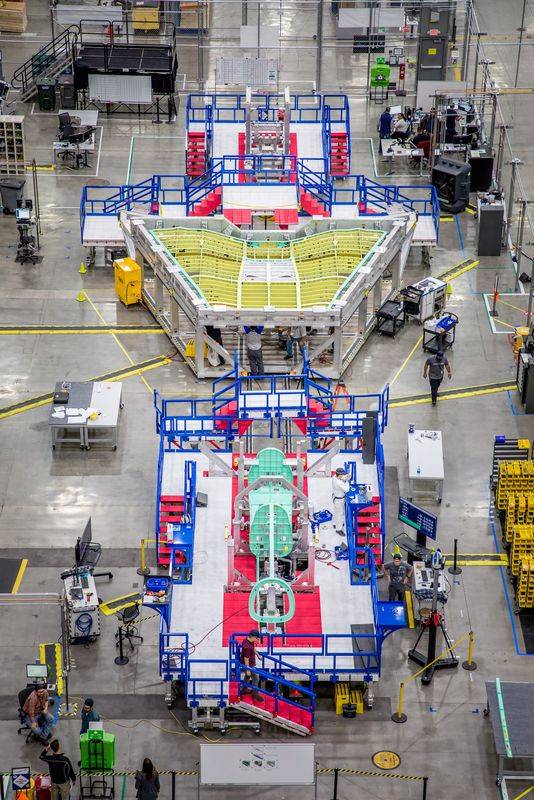 Features of the aircraft X-59 QueSST

Assembly of the X-59 QueSST aircraft is already underway and should be completed before the end of 2020. At this point, the plant in Palmdale plans to complete the assembly of the fuselage, wing, plumage and integration of all major systems, including an innovative surveillance system from the cockpit. An unusual system is necessary, since the aircraft received a very elongated and pointed nose cone, which seriously limits the pilot's ability to view forward. To solve this problem, a camera with a resolution of 4K and a viewing angle of 33 by 19 degrees will be installed in the nose of the aircraft.

Not much is known about the technical characteristics of the experimental aircraft. The maximum flight speed will be 1510 km / h. The task of setting records for the developers is not, and to achieve their goals, such a speed is more than enough. In this case, the aircraft will be able to fly at an altitude of about 17 thousand meters. It is known that a General Electric F414-GE-100 turbojet bypass engine (thrust of 98 kN) will be installed on an experimental aircraft. The crew of the aircraft will consist of one person.

The maximum take-off weight of the X-59 QueSST is approximately 14 kg. The maximum length of the aircraft is more than 700 meters, the wingspan is just over 29 meters, and the maximum height is approximately 9 meters. The aircraft will use a three-post retractable landing gear, which was borrowed from the F-4,3 fighter. Elements of the cockpit taken from a Northrop T-16 Talon supersonic training aircraft. 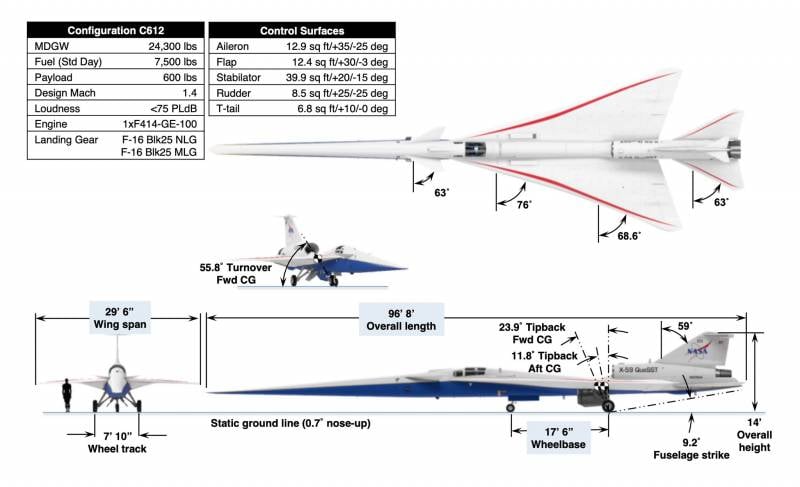 According to the assurances of the developers, the sound of an experimental aircraft passing the sound barrier when switching to supersonic flight speed and the flight itself at supersonic speed will be much quieter than that of existing aircraft. For a listener on the ground, the sound will be reminiscent of the usual clap of a car door being closed, not a peal of thunder. Various sources indicate that the noise level will be from 60 to 75 dB. This is an order of magnitude smaller than that of all modern supersonic airplanes, which upon transition to supersonic provoke a real "sonic boom", the waves of which reach the earth's surface. In the future, Americans plan to use the proven technologies in civil aviation to create new supersonic airliners that will help to revise the rule on the prohibition of flights of supersonic aircraft over populated areas.

To achieve a quiet supersonic flight, designers use a specially designed aircraft design. The aircraft visually highlights the long narrow fuselage and the used duck aerodynamic design. All this should help reduce noise. In addition, Skunk Works engineers paid a lot of attention to the wing geometry of the aircraft and install special noise filters around the engine.

Skunk Works is responsible for the development of the X-59 QueSST pilot aircraft. It is noteworthy that this division of Lockheed Martin Corporation for many years specializes in secret developments in the interests of the US Air Force. It was the specialists of this company who were developing the two most famous American reconnaissance aircraft in the history of aviation - Lockheed U-2 and SR-71 Blackbird. The same company had a hand in the creation of the fifth-generation American fighter F-22 Raptor and F-35 Lightning II. 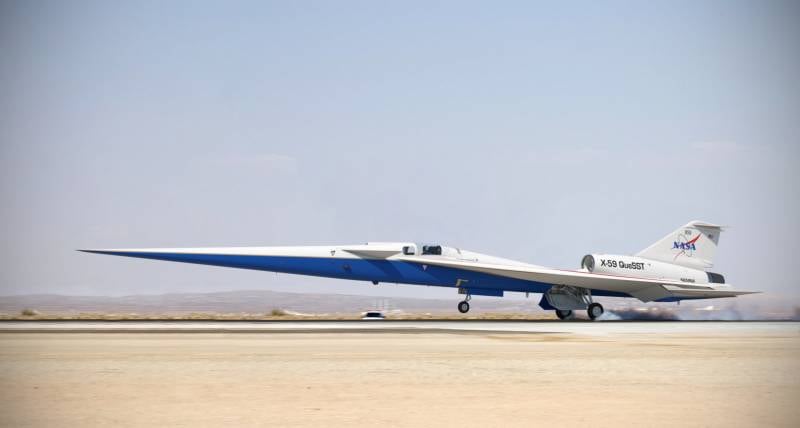 From the very beginning of its existence, Skunk Works, formerly known as the Lockheed's Advanced Development Project division, has positioned itself as a division of promising developments. This does not deny the claimed civil and commercial component of the new project. But some doubt creeps in. The X-59 QueSST experimental aircraft may be a dual-use product; some of the tested technologies may later migrate to military aviation.

It cannot be argued that the technologies tested in the framework of this project will not be used in the future to create modern high-altitude reconnaissance aircraft or combat aircraft. True, and with absolute certainty, talking about this also does not make much sense yet. There is simply no official evidence for this.

We are in Yandex Zen
An-12 in Afghanistan
At the speed of reason
48 comments
Information
Dear reader, to leave comments on the publication, you must to register.