Cracks in the armor. Defective T-34 for the front 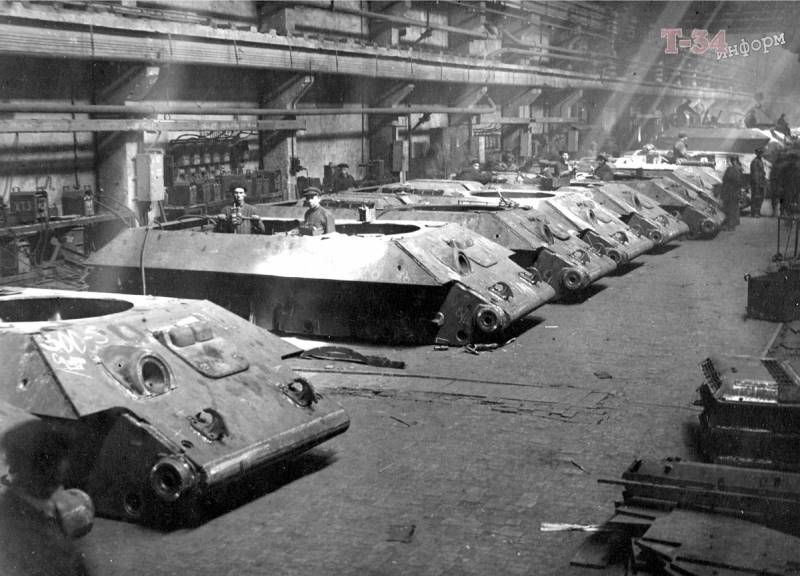 Photo from the album of photos of the plant №183 named after Comintern. Source: t34inform.ru

How can the avalanche increase the output of the front-line needed tanks? In the book of Nikita Melnikov, “Tank Industry of the USSR during the Great Patriotic War,” data are presented on reducing the conditions for receiving finished products by military representatives.

Since January 15, 1942, tank factories have been very "liberal" in assessing the quality of manufacturing armored vehicles. Only every tenth T-34 medium tank and heavy KV at the option of the military representative was subjected to a short five-kilometer run. In the case of the T-60 tanks, obviously, there were more doubts, so every fifth light tank was subjected to mileage. Or maybe such machines were less needed at the front, therefore they were stricter to them even at the acceptance stage. This indirectly confirms the control firing of the guns of each T-60 exiting the factory gates, while the T-34 and KV guns were checked only on every tenth machine. They allowed sending tanks with missing speedometers, turret turning motors, intercoms if they were replaced with warning lights, as well as tower fans. The last point, fortunately, was allowed only in the winter. 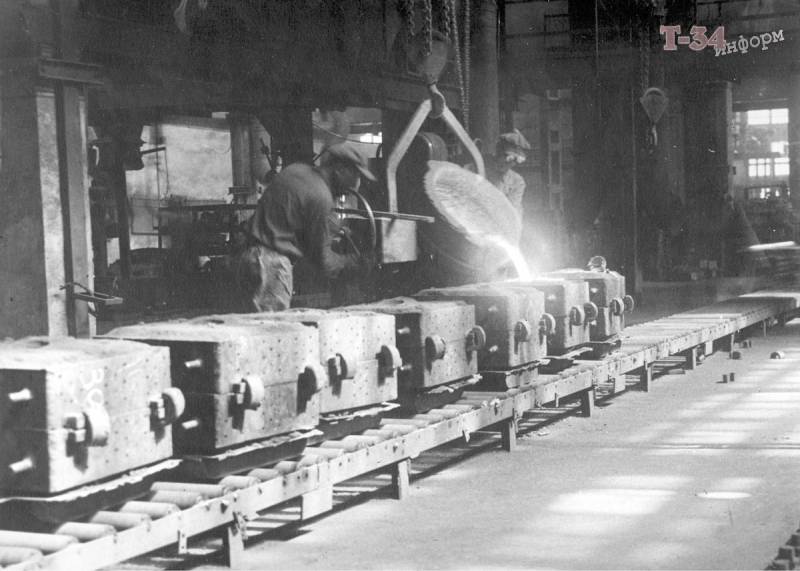 Photo from the album of photos of the plant number 183 named after Comintern. Source: t34inform.ru
It should be noted separately that by the middle of 1942 the tank industry had successfully coped with the quantitative indicators of the production of armored vehicles. Uralmash regularly even exceeded the standards for the production of tanks, and the Kirov plant in Chelyabinsk only from January to March increased its production of V-2 diesel four times.

Such production growth rates were largely due to a serious decrease in the quality of tanks coming off the assembly line. An illustrative example is the 121st tank brigade, which during the 250-kilometer-long throw lost half of the heavy HF due to breakdowns. This happened in February 1942. For a long time after this, the situation did not fundamentally change. In the fall of 42nd year, 84 HF tanks were inspected, which failed for technical reasons, which did not even work out 15 motor hours. Most often, faulty motors, broken gearboxes, defective rollers, worthless triplexes and many minor flaws were found. In the summer of 1942, up to 35% of all T-34 tanks were lost not because of enemy shells or a mine explosion, but because of the failure of components and assemblies (mainly engines). Nikita Melnikov in his work suggests that part of the losses can be attributed to the low level of crew qualification, but even with this in mind, the percentage of non-combat losses is too large. However, such faults KV and T-34 could well be eliminated in the field, sometimes simply replacing the unit or assembly. But with the unsatisfactory quality of the armor on the T-34 at the front, it was useless to fight - the armored hulls were brewed from steel with low viscosity, which, when enemy shells hit it, caused cracking, delamination and spalling. Often, cracks formed on new vehicles, which sharply reduced the crew’s chances of a favorable outcome when a German shell hit a crack or an adjacent armor area. 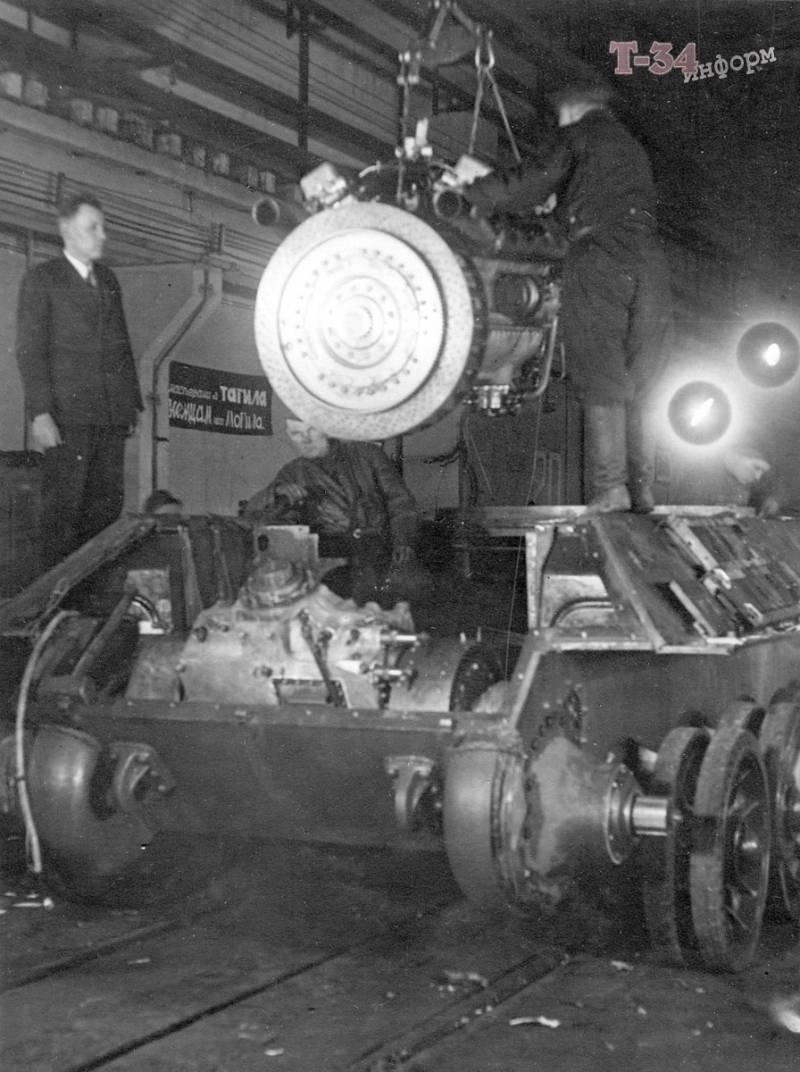 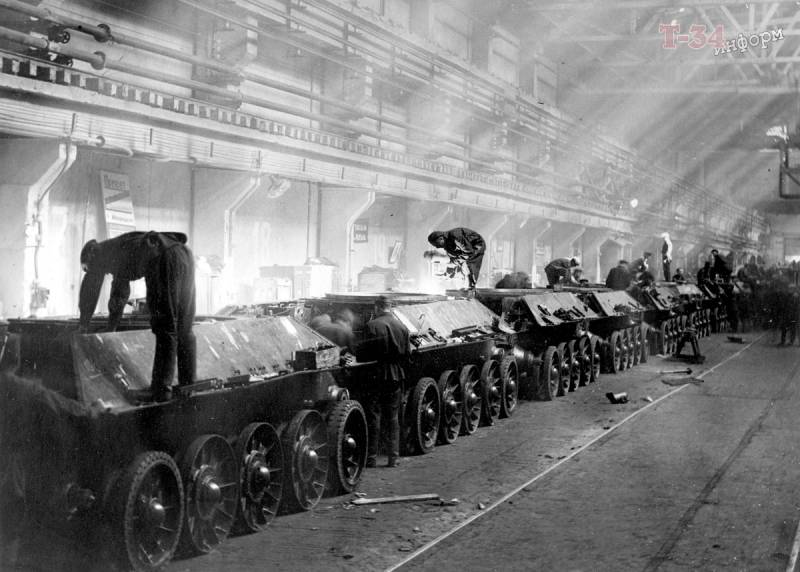 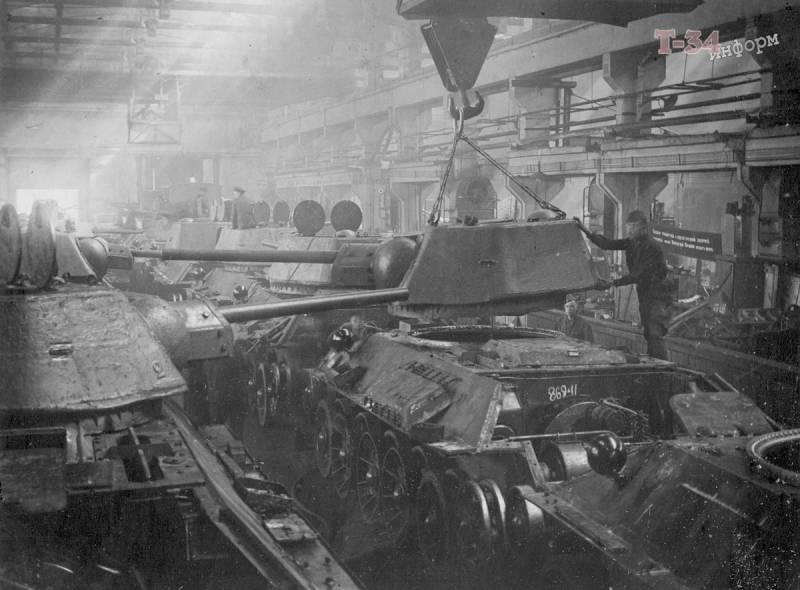 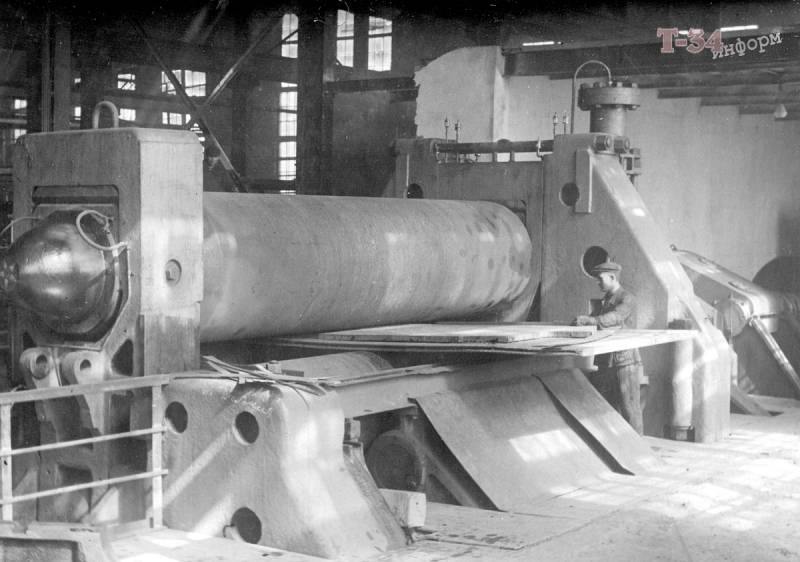 Photo from the album of photos of the plant number 183 named after Comintern. Source: t34inform.ru
The first alarming calls about entering the T-34 unit with cracks were made in May 1942: complaints on 183 vehicles arrived this month at factory No. 13, 38 tanks in June, and seventy-two T-34s in the first decade of July. . The government could not be silent in this case, and on June 5 the GKO adopted a resolution “On improving the T-34 tanks”. The USSR prosecutor’s office was simultaneously instructed to investigate the causes of this decline in tank quality.

In the course of the work, investigators, in particular, found out numerous facts of theft of products from the diet of tank industry workers. Factory workers are simply malnourished. One example of such a predatory attitude is given in a series of materials about Isaac Salzmann, the most controversial leader of tank factories.

Among the enterprises that "distinguished themselves" in the production of defective T-34s, the famous factory in Nizhny Tagil came first. Moreover, the peak in the production of defective products came just at the time of the leadership of the aforementioned Zaltsman. However, the directors of the enterprise, as we recall, were not demoted, but immediately appointed People's Commissar of the tank industry. Obviously, the highest echelons of power decided to blame primarily Vyacheslav Aleksandrovich Malyshev, the 1st People's Commissar of the USSR tank industry. True, sobering came a year later, in the summer of 1943, Malyshev was again put in place of the people's commissar, who he retained until the very end of the war.

In addition to the half-starved existence of factory workers, the prosecutor’s office during work at evacuated tank industry enterprises revealed another problem of the unsatisfactory quality of tanks - a serious violation of the production cycle.

Simplification to the detriment of quality

As you know, the Mariupol plant named after Ilyich could not be defended, he was in the hands of the enemy, and with a mass of technological equipment that they did not manage to evacuate. It was this enterprise (the only one in the country) that was capable of producing full-fledged armored hulls for the T-34 in compliance with all standards. In the Urals, not a single plant could offer such a thing, so the scientific team of the Armor Institute (TsNII-48) began to adapt the Mariupol practices to the realities of the evacuated factories. For the production of high-quality armor in the required GKO volumes, there was an acute shortage of thermal furnaces, so the institute developed a new cycle of hardening of the armor parts. In Mariupol, the armor plate first went to hardening, then to high tempering, then again to hardening. Finally, followed by a low vacation. To speed up production, the first quenching was initially canceled, and then high tempering, which directly affects the viscosity of the armored steel, and reduces the likelihood of cracking. Also among the necessary measures, according to experts of the Armor Institute, the requirement to load not one but four or five rows of armored plates into the thermal furnace stood out. Naturally, it turned out much faster, but the final quality of the plates was very heterogeneous. Interestingly, the Armored Institute later decided to cancel the low-tempering procedure, which reduces the residual stress of the metal, which again did not fail to negatively affect crack formation. 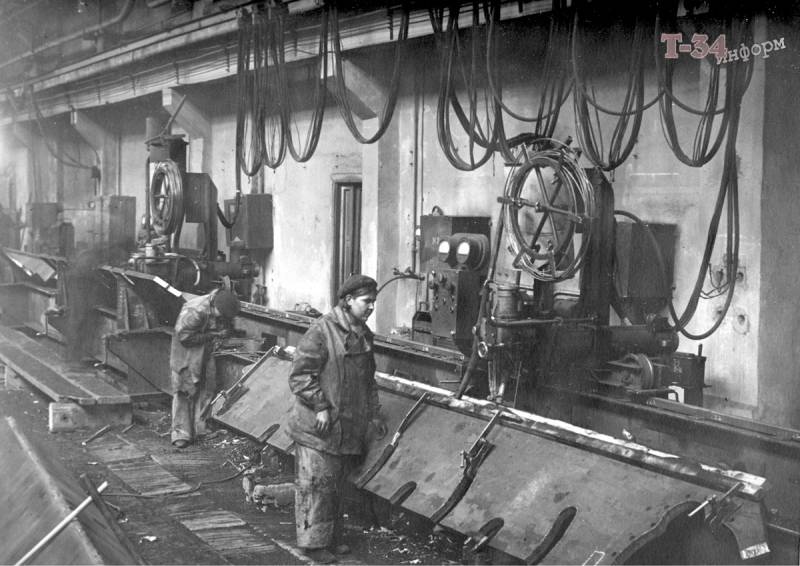 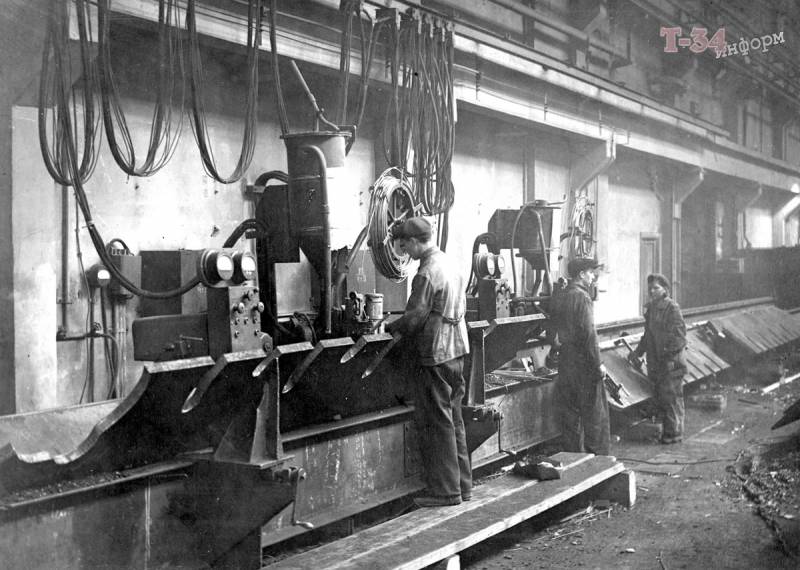 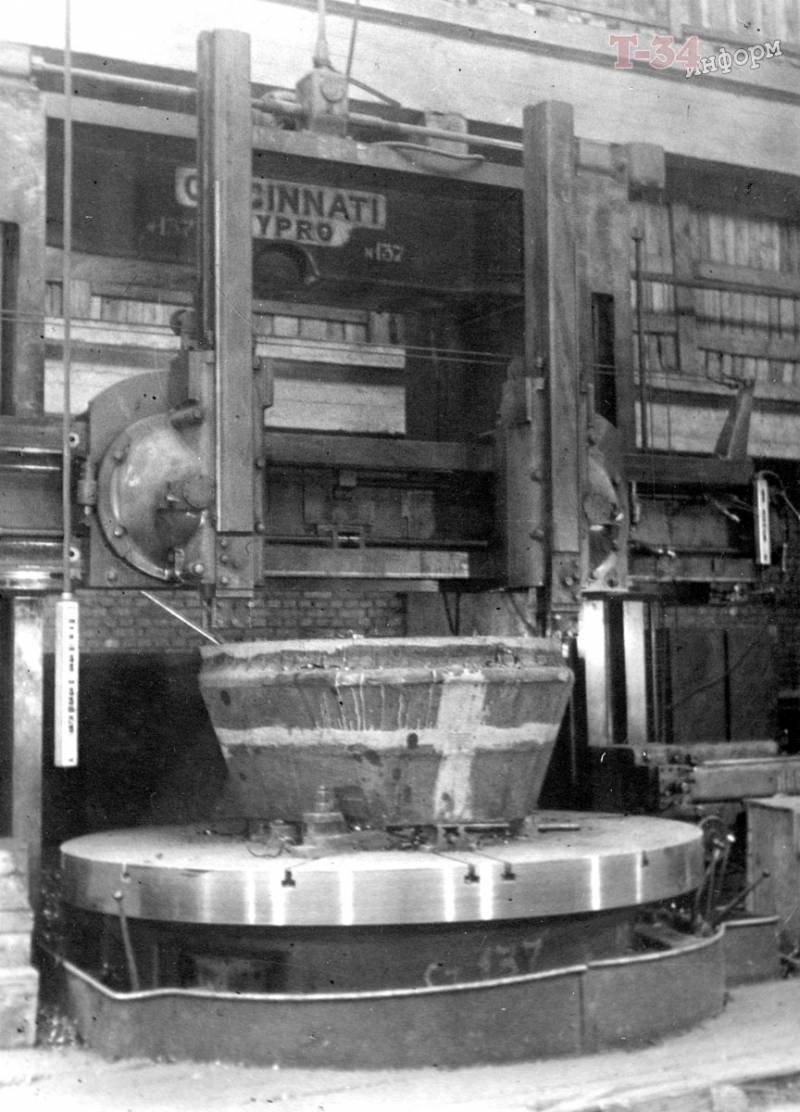 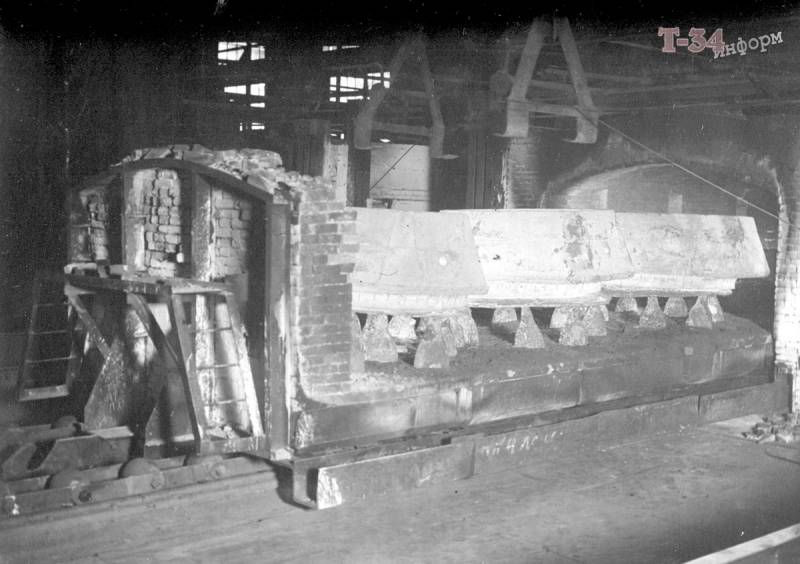 Photo from the album of photos of the plant number 183 named after Comintern. Source: t34inform.ru
It is impossible to cut hardened steel with gas cutters - this thesis is known to everyone, but the realities of the production of T-34 armored cases forced to resort to this unpopular method. It was about steel 8C, which expanded after quenching, and, of course, this forced the plant workers to cut it with high-temperature burners. The meaning of hardening armor in the cutting area was lost.

It is not worth affirming that recommendations for improving the production process carried only negative for the quality of the armor. So, welding of armored plates “into a spike” instead of the old “into a castle” and “a quarter” became a real innovation in assembling the hulls of T-34 tanks. Now the mating parts did not crash into each other, but partially overlapped each other. Only this decision seriously reduced the volume of machine hours on the case from 198,9 to 36. 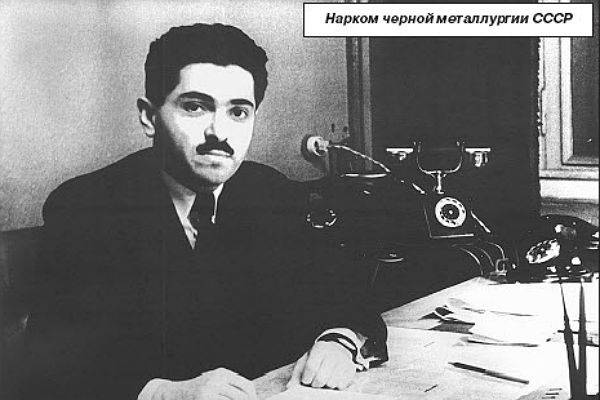 People's Commissar of Ferrous Metallurgy Ivan Tevosyan. Photo: trud.ru
The main supplier of defective steel sheet for plants manufacturing T-34 was the Novo-Tagil plant of the People's Commissariat for Ferrous Metallurgy. At first, he interrupted supplies from the Mariupol plant, and when he switched to his own, a stream of complaints began to flow from the front and from the factories. In particular, in the composition of the 8C armor from this enterprise there were serious differences with the technical conditions (TU) in the content of carbon, phosphorus and silicon. There were generally difficulties with TU. The People’s Commissariat of Ferrous Metallurgy didn’t agree to preserve technical specifications according to Mariupol standards, in which phosphorus, in particular, should be no more than 0,035%. In early November 1941, the People's Commissar of Ferrous Metallurgy Ivan Tevosyan approved new phosphorus standards, which increased the possible content to 0,04%, and from April 4 to 0,045%. It is noteworthy that historians still do not have a single opinion on this, of course, an important factor in the quality of armored steel. Nikita Melnikov, in particular, mentions that the Novo-Tagil plant, on the contrary, by the middle of 1942 reduced the proportion of phosphorus from 0,029% to 0,024%. It seems that different scientists find different reasons for the appearance of defective T-34s at the front. Be that as it may, the indicated standards for the content of chemical elements in the composition of the steel were sometimes not respected. It was difficult for the plants to establish a simple uniformity of the supplied steel. The prosecutor's office also revealed that at the enterprises of ferrous metallurgy in open-hearth furnaces, the armor was "not enough" - instead of 15-18 hours, in reality, no more than 14 hours. 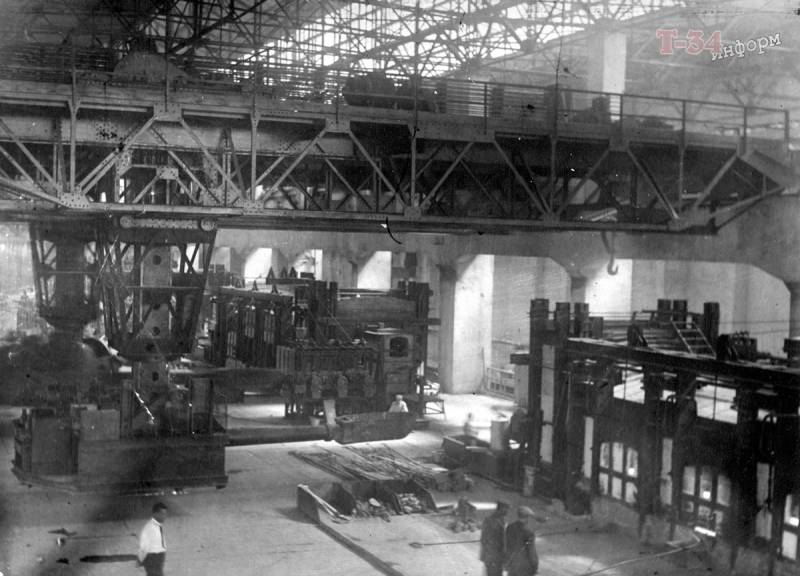 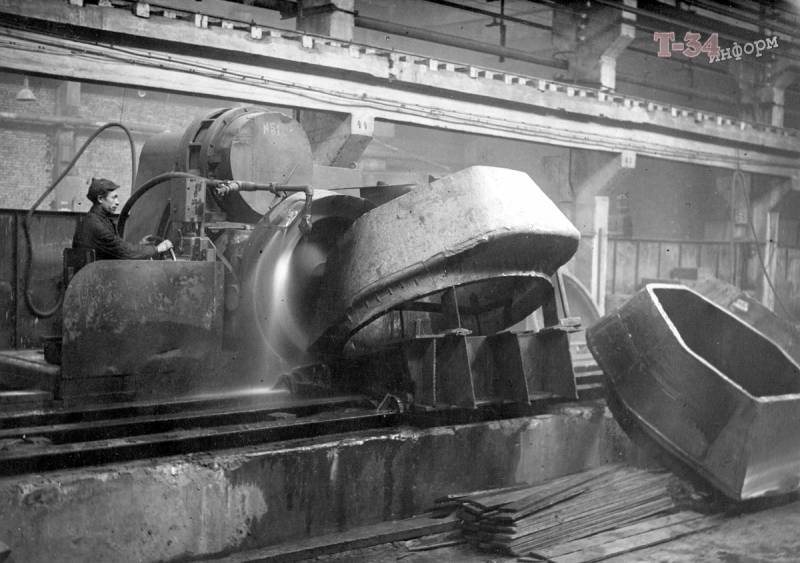 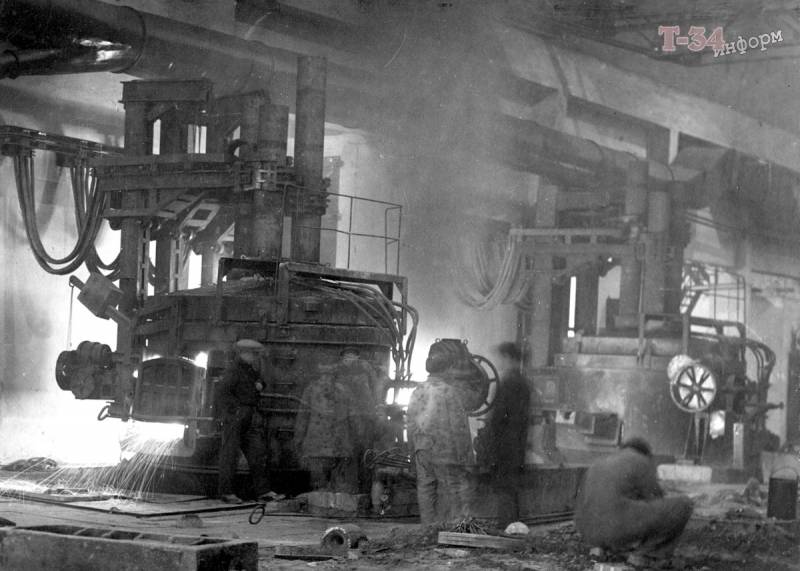 Photo from the album of photos of the plant number 183 named after Comintern. Source: t34inform.ru
When information about the causes of cracking on the T-34 corps reached Molotov, the People’s Commissariats of the iron and steel industry and the tank industry began to shift responsibility to each other. One of the main reasons was the high phosphorus content in the armored plates, the other - serious violations of the technology for the production of shells in tank factories.

As a result, TsNII-34 was connected to work on crack control on the T-48 (although he was guilty of their appearance indirectly). The complex of measures proposed by the institute only by the end of 1943 allowed to eliminate some of the comments. And an increase in the quality of steelmaking at the iron and steel enterprises allowed to reduce the defect share from 56,25% in 1942 to 13,30% in 1945. By the end of the war, enterprises had not reached a level close to 100%.

We are in Yandex Zen
The development of the military-industrial complex of the Russian Empire in the years of WWI
Myths of the Great Patriotic. Papier mache helmet
155 comments
Information
Dear reader, to leave comments on the publication, you must to register.