"The reputation of the General Staff of the Armed Forces collapsed": recall the feat of the militia in Debaltseve 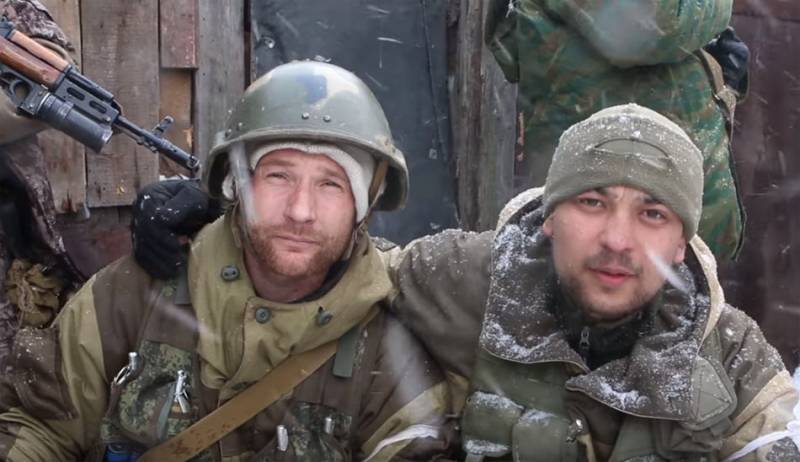 Debaltsevo ... Most of the Russians did not even know about the existence of this city, located 74 kilometers from Donetsk. Yes, the city, yes, a major railway junction. Of which there are many throughout Ukraine and in the Donetsk region in particular. However, after the events of the beginning of 2015, there is no longer a person who does not know the name of this city.


As you understand, today we will talk about the Debaltsevsky boiler. About the operation, which was carried out with brilliance not by miners, drivers or workers of other specialties who were defending their home, but already by soldiers and officers of the new army. The DNI army, which emerged from the Donbass militia, and completed the feat.

Debaltseve became the birthplace of the LDNR army

I have no right to advise these people what and when to celebrate, but nobody will forbid me to express my personal opinion. The end date of this operation should be celebrated as the birthday of the army of the republic. After Debaltsev, the media (with the exception of, perhaps, especially the rabid “patriots” from some Ukrainian publications) ceased to call the militia professions that they owned before the conflict began.

Now these were already soldiers, and the soldiers behind which already had their own “Stalingrad”, their own “Moscow”, their own “Odessa”, their own “Sevastopol”. You can argue with my opinion. It’s even necessary. For some, the battle for the airport will seem more important, for others, the first boilers. Over the years история Donbass was enriched with many heroic episodes.

Hundreds of dead and wounded, dozens burned tanks and infantry fighting vehicles, abandoned depots with tons of ammunition and weapons. This is the result of the operation, which ended on February 18, 2015. But the most important result is rarely mentioned. After the Debaltsevsky boiler, the reputation of the Ukrainian army, the reputation of the General Staff of the Armed Forces and the officer corps of the Ukrainian army simply collapsed.

It was then that a version appeared in the Ukrainian media about "Buryat armored cavalry tank divisions of light divers." "Russian officers-commanders and chiefs of staff" appeared. "Pskov paratroopers" appeared, T-14 Armata tanks.

At that time, we seriously monitored the situation in the Donbass. The fakes of Ukrainian propaganda were exposed, separate battles and acts of sabotage were analyzed. We actively communicated with soldiers and officers of the LNR army formations. And in the process of this communication, they noticed a change in the mood of the militias.

I remember one expression that is now perceived as an indicator of mood changes. “Fuck, they’ll kick us out of position. The teeth break off. ” Of course, not the diplomat spoke out, but how accurately the thought was expressed. No fear, no excitement, no jitters. There is calm confidence in yourself and your comrades.

I won’t talk about fights today. Just because today you can not only listen to the memories of the participants, but also see the many videos shot then.

If we talk about the Debaltsev ledge itself, then even for the amateur it was clear that it would be hot in this place. Let me remind you that the Debaltseve railway junction was occupied by units of the Armed Forces of Ukraine and the National Battalions on July 28, 2014. We won’t understand why the militias could not have foreseen and accordingly prepared for the defense of the area between Alchevsk and Gorlovka. The summer of 2014 ...

Why this pocket, when the Armed Forces of Ukraine dug their “tongue” into Debaltseve, and the militias controlling territories on three sides of this language, did not make any efforts to destroy this group, is also understandable.

APU already received the Ilovaisk boiler in September 2014. The hardest battles for the Donetsk airport followed. The Ukrainian army needed a respite. Likewise, the situation was on the other hand.

The militia did not have resources comparable to the APU. And months of continuous fighting led not only to loss of personnel, but also to loss of equipment and weapons. A limited number of tanks and infantry fighting vehicles, artillery, inferior in number and quality of the APU. Coming in such a situation means throwing people on a prepared defense without appropriate support.

The vile APU operation that led to the collapse

It is very difficult to talk about meanness in the war. War is generally a vile thing. But, in my opinion, after the APU was defeated at the airport (January 2015), the APU staff developed a rather vile operation, the purpose of which was to be a forced militia attack in Debaltseve.

Remember the appearance of "flying mortars" that disguised themselves as utility vehicles and fired at the crowded places of civilians? The most famous shelling of the stop "Donetskgormash" in the Leninsky district. It was there that 15 civilians were killed.

Then there were numerous shelling from large-caliber barrel artillery at the settlements surrounding Debaltseve. The shots of these shells struck with their cruelty. They beat intentionally where there were more people.

In principle, the goal of the “nerve strike” operation was achieved. The militia command decided to launch an offensive. Moreover, not only the DNI militia, but also the LC, should have eliminated the “language”. Outwardly, according to the maps, the operation was similar to the one carried out by the Red Army on the Kursk Bulge.

Briefly about the feat of the militia

Against several national battalions in Debaltseve was concentrated a lot of troops. It is clear that even today we cannot know the exact figure, but there are assessments of different sides. Ukrainian forces, according to various estimates, ranged from 3 to 6-7 thousand people with the support of armored vehicles and artillery. There were BTGs of 25 airborne brigades, BTGs of 128 mountain infantry brigades, and RTGs of 17 tank brigades.

The militia could not boast of such forces. The personnel - from 6 to 9 thousand, several dozens of armored vehicles and the Kalmius artillery brigade to support the offensive.

The offensive began on January 22, 2015. Many remember how the “warriors of the world” behaved in the Donbass at the beginning of the war. Robbery of civilians, killings, violence. All this became one of the reasons that the positions of the BTG and the location of the Arsenals of the Armed Forces were well known to the militia gunners. Moreover, they didn’t really want to freeze in the APU field.

So, on January 22, the militia artillery struck at Olkhovatka, Popasnaya, Chernukhin, Troitsky, Redkodub, Sanzharovka, almost at the rear of the Armed Forces. It is clear that the high-quality work of artillery sowed panic in the ranks of the National Bats and the Armed Forces.

February 5 Uglegorsk taken. On February 9, the village of Logvinovo was taken. After establishing control precisely over Logvinovo, it became clear that the boiler was "covered with a lid." Here I will have to return to my opinion on the date of the emergence of the LDNR army.

Then everything was done as in textbooks on tactics of battle. The group was divided into separate centers of defense and methodically destroyed defense nodes with artillery and tanks. Thus, depriving the AFU command of the opportunity to counterattack the militias.

Death for an idea or stupidity of commanders?

Fathers-commanders from the Armed Forces of Ukraine and the National Battalions amicably draped over the territory under the control of Ukraine, leaving their subordinate troops. Nobody expected such a shame for the officer corps. But it was. Remember the wounded to the fifth point of the knight of the order of Bohdan Khmelnitsky Semen Semenchenko (Grishin), who successfully reported on the battles near Debaltseve from the hospital chamber in Artemovsk?

Very often, talking with representatives of the opposing parties, I come across the fact that estimates of militia losses and APU are completely untrue. Agree, "I was there and saw how much they put" - not an estimate. Therefore, I will give approximate figures.

According to various estimates, losses of APU in manpower range from 250 to 3000 people. Why is there such a huge difference in grades? Just because not only fighters of the Armed Forces of Ukraine, but fighters of the National Bats are included here. Accounting personnel has always been a weak point of the Armed Forces and battalions. Establishing the exact number of dead bodies is also problematic.

The militias have smaller and more accurate numbers. Although accounting was also limping on both legs. It saved the fact that most of the fighters were from local. The disappearance of anyone was quickly investigated. However, in the battles for Debaltseve killed from 100 to 150 militias.

The losses of weapons and equipment were also enormous. Destroyed or captured by the militia about 300 units of armored vehicles. Especially a lot of tanks and BPM. Moreover, tens of tons of ammunition of various calibers were captured.

It is impossible to forget the Debaltsevsky cauldron and the feat of the militias. Talk about the feat of soldiers and officers of the LDNR at Debaltseve is necessary. Just because history is quickly forgotten. It turns into granite at first, and then to dust.

But worse than that, they then mold a completely different story from the dust. The story is not heroes, but traitors. And we already see this in Ukraine today.

We are in Yandex Zen
The tragedy of the American army ("The Atlantic", USA)
Situational analysis of the death of the MH17 flight (Malaysian Boeing 777), made on the basis of engineering analysis from 15.08.2014
26 comments
Information
Dear reader, to leave comments on the publication, you must to register.