Liberal Cossack of Rotten Fishes, or How to Blow Soap Bubbles 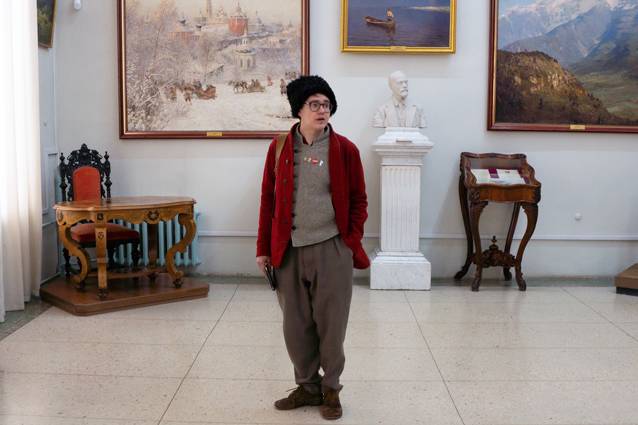 In January, the Snob magazine published material under the ambiguous title “How Oppositionist Cossacks Live”. Before proceeding directly to the material, we immediately outline the specifics of the media platform called “Snob”.

At different times, such “lights” of culture as Andrei Makarevich, Oleg Kashin, Sergey Parkhomenko, Boris Akunin, etc. worked with the magazine. As a result, the journal platform was so heavily laden with opposition figures of various kinds that in 2011 several project participants left him by writing an open letter to management, criticizing the editorial policy of Snob. Although it is quite possible that in the best traditions of local fighters for the idea, they simply did not divide the clearing and all the gifts that it brings ... or does not bring, because, like all opposition publications, Snob is not viable without financial vaccinations.

And how do “Cossack oppositionists” live?

From the very first lines, the magazine branded the Cossacks as a strange and frightening phenomenon, designating the Cossacks as “mummers” and “healers”. After that, from the ship to the ball, so to speak, “Snob” said that there was “part of the Cossack society”, which was outraged by the image that the journalists themselves literally created on the same pages a line back. How big is this “part”?

No matter how much the snobs scrabbled over the galleys, they could not scrape together more than three Cossacks. So, first in order, but obviously not in importance, is Pavel Gnilorybov. According to Snob, Pavel was born on the Don in the city of Kamensk-Shakhtinsky, Rostov Region, and studied in a Cossack class. But in his small homeland, Pasha did not take root, and therefore leaned into the capital, which became the center of attraction for the mass of the most conceited. After graduating from the history department of Moscow State University, according to the tradition of “loving Don with all his heart”, he stayed in Moscow, finding in the opposition offices rushing rapids in the mainstream of life. While taking walking tours of the city, he periodically speaks out with the support of LGBT people, criticizing the registered Cossacks and dresses up in a women's dress. 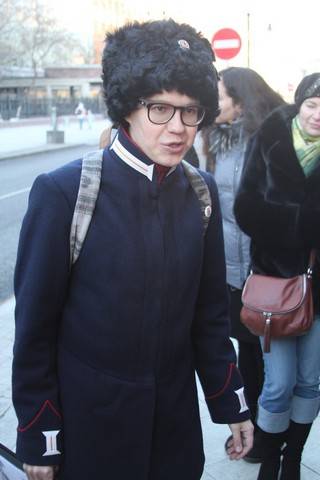 The rotten fish "in the spotlight"
Hnilorybov himself does not even hide that he does not live by the labor of his hands, but, as they say today, by hype. Here is a direct quote:

“If you feel that there is not enough drive in your life, you declare yourself an“ intergalactic Cossack ”, start sending out press releases, and some of the media will write about it in all seriousness.”
According to "Snob", the rotten fish are a Don Cossack, a liberal and an atheist (!).

The next character of this mighty army is Mikhail Popov. He is less known than the Putrid Rybov, who has long been scouring Moscow, since the Pussy Rayot. Popov, according to Snob, is also a Don Cossack. True, in the Don you will not find it during the day with fire. Misha is a student and studies at the Moscow Institute of Physics and Technology with a degree in Geocosmic Systems Motion Control. I don’t know how much this Cossack was imbued with the endless depths of space, but already in his first year, instead of diligent studies, he organized a telegram channel “Database: provocateurs, strikebreakers, hirelings” with a number of brothers in his mind. 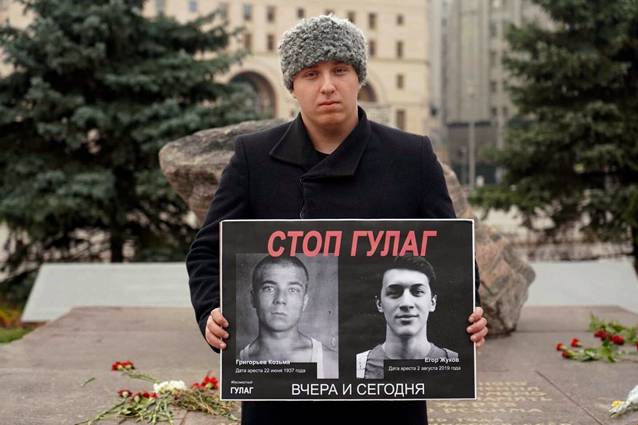 Mikhail Popov and his fight
On this channel, freshmen posted personal data of political opponents of their little leader Navalny, who dared to express their opinion on their home site - on the street. The personal information of the creators of pages in support of the Donbass, pages criticizing US policy, etc. went there. In general, young wrestlers were engaged in petty denunciation. Ethics? What is the ethics when yesterday’s schoolchildren, who recently wandered their greasy eyes at the pages of pornographic sites, drew the attention of the media and “serious” people. Now Misha doesn’t want to hear about any space, dreaming of a political career and planning to create his YouTube channel in the “Don dialect” with Russian subtitles. 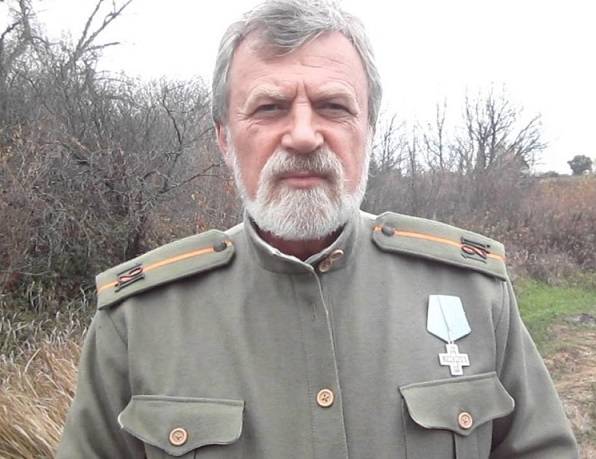 Vladimir Melikhov
The list of "part of the dissent" closes the Don Cossack Vladimir Melikhov. Calling Melikhov “the most famous Cossack of Russia”, “Snob” is not so wrong. None of the above-mentioned “Cossacks” suited a more odious advertising campaign in their honor. Of course, just like a young shoot, Vladimir, who has passed over 60 years, is rarely on the Don and prefers to live in Podolsk, bargaining for building materials.

After the collapse of the USSR, Melikhov opened a museum of "anti-Bolshevik resistance", there he opened the memorial "Don Cossacks in the fight against the Bolsheviks" with the mention of such a "hero" as Pyotr Krasnov (White Guard General, and later a member of the SS).

I don’t know how well Vladimir knows how to check, but he did a lot of language. Cossacks, according to Melikhov, are entirely liberals, as well as a separate people, the USSR is the same “Reich”, and Krasnov and others are just “patriots”. And, of course, Melikhov supported the "Maidan" and "decommunization." Vladimir considers himself Orthodox, however, he prefers to import priests for his Sabantuys from ROCOR, i.e. because of the cordon. Moreover, every time a competent authority begins to become interested in a citizen, he almost refutes everything previously voiced. 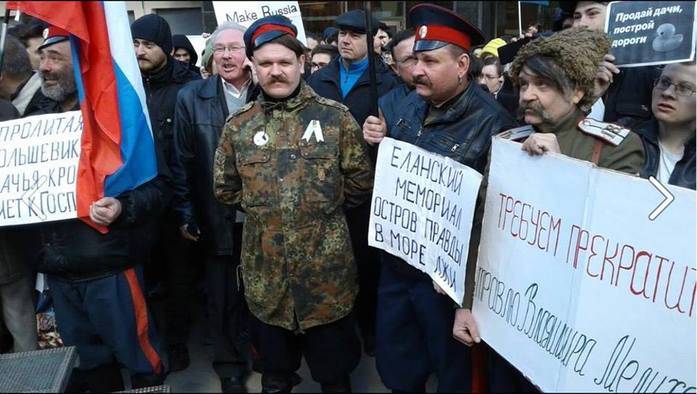 Adepts of Melikhov
He recruits his followers on the basis of the “hen on the grain” principle; therefore, a picture is created of a peculiar Cossack camp, where “he who stood up earlier dressed better.” Crumpled hats swim in the crowd over not the first freshness of their heads, interspersed with caps, chewed tunics with monstrous epaulets and camouflage something baggy. In general, noble fighters for ... but God knows why.


It would seem that the "atomic" weight of these individuals is negligible. Just soap bubbles of large volume with a thin shell. What they were inflated with, and I do not want to know. Cossacks? What kind? The Cossacks, who, during best practice, only cut off their ears, saw horses except in the zoo, performed military service in video games, and carry the uniform on them like a sack, but each time a different color ... And the Atheist Cossacks are especially pleased that identical to a homosexual womanizer.

But in the modern plastic world, in which minor undergraduates become ecologists, if only there is a platform for popularization, in fact, anything is possible. The importance of the content has disappeared, the importance of the packaging and its quantity remain. Moreover, individuals who play the role of packaging do not mean anything. In the best case, they end up comfortably, in the worst they simply dissolve, periodically jumping out of their lifetime grave in pairs of mercaptan. And most importantly, these people do not even think about such things, for them the main thing is to figure in the center of attention, in the center of the crowd. And there were and will be many ... 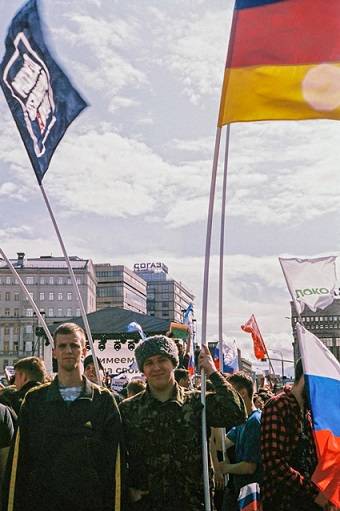 Mikhail Popov at the next opposition event, holds the flag of the Great Don Army
Where did Evgenia Chirikova run for the last time, who successfully went into the "cache" and the circulation, in what time and space Babchenko disappeared, where did Sokolovsky go, catching Pokemon in the temple, and when "burst" Misha Konev, an expelled student and activist of the youth "Parnassus" ... where are all these people? The bubble burst, and the void inside dissolved.

But thanks to modern technology, inflating a new puffy cloud of bubbles is relatively inexpensive. And thirty years of the complete absence of the state on the ideological platform and the drop in education made it possible to simplify the search even for those hysterical shells that would play the role of soap armor for the next bubble. And as soon as a relatively new “soapy” ecologist (doctor, proletarian, actor, singer) bursts, hordes of gorlopans rush in their place.

And all this falls down on the unfortunate layman, like a dust storm. In public transport, “soap bubbles” buzz from the speakers, penetrating the inside of the cranium. From a smartphone, this foam show pours non-stop. In the evening at the TV, while gambling surfing on satellite channels, no, no, yes, another activist will appear. And the philistine, who leaves for another country, sometimes does not flee from his homeland, but from that soapy foam that filled the entire information platform. There is no future visible behind this foam; it hurts the eyes. And the state, as we recall, has long been removed from the ideological platform.

We are in Yandex Zen
About Stalin and Khrushchev
What you didn't want to know about England
69 comments
Information
Dear reader, to leave comments on the publication, you must to register.