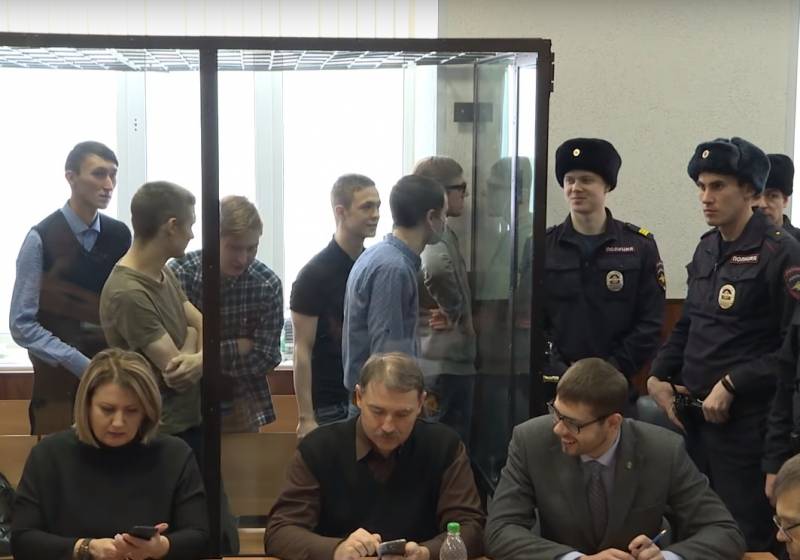 Defendants in the Seti case, on February 10, 2020, found guilty and sentenced to long terms of imprisonment, are going to appeal the verdict.


The “Network” (banned in the Russian Federation) was recognized as a terrorist organization, and seven of its members were sentenced by the verdict of the Volga District Military Court: Pchelintsev to 18 years in prison, Shakursky to 16, Chernov to 14, Ivankin to 13, Kulkov - at 10, Kuksov - at 9, Sangynbaev - at 6. The young people themselves say: they are not guilty of anything, and the confession was knocked out by special services with the help of torture. Igor Shishkin, whose case was examined in a special order, on January 17, 2019 received 3,5 years in a general regime colony.

Recall that the Network case was initiated by the Federal Security Service in 2017. The residents of Penza, Moscow and St. Petersburg passed along it. Intelligence agencies established that these persons planned to carry out a series of resonant terrorist attacks in Russia and destabilize the situation in the country, for which they created a terrorist organization.

According to investigators, by 2016, the “Network” took shape in a hierarchical structure with a clear distribution of responsibilities of participants. Its main goal was the implementation of the revolution in Russia. Allegedly, a certain scenario of an armed coup called “Hour" H "was developed. In total, three possible scenarios were considered: “Ukrainian” - on the model of events on the Maidan, “Syrian” - inciting a civil war, and the third scenario - the most desirable - “popular uprising”.

To implement their plans, members of the organization conducted regular training near Penza. They practiced on them the possible tactics of action during the riots. The convicts themselves, however, claim that these were only airsoft classes.

Explosives, grenades, carbines and pistols, narcotic substances, as well as political literature, including the works of the classics of Marxist thought, were seized from some detainees during searches. Interestingly, the court ordered the burning of Karl Marx's book Capital, which was seized during the searches, as a “means of committing a crime” of no value. Together with Capital, the GRU special forces textbook and several anarchist brochures also confiscated during the searches were “sentenced” to burning.

The resonance of the Network business was enormous. Firstly, many circumstances of the case still raise questions from the public - these are the statements of the accused about the torture applied to them, and extremely harsh sentences.

Secondly, an underground organization was planned in Russia (if you accept the official version), which planned the whole revolution. Moreover, the organization is not Islamic, not right-wing, but ultra-left, inspired by communist ideas. And the fact that this organization included completely prosperous, previously not convicted, young people - students, workers, even an entrepreneur - is also very revealing.

First about the verdict. Eighteen years is a very tough measure. Recall that in the sensational case of the "Amazons" who literally shot police officers in the Rostov region and were found guilty of the brutal murder of an officer of the Nizhny Novgorod SOBR with his wife and two young children, the defendants received approximately the same sentences - from 16 years to 21 years in prison.

But on the account of the gang of "Amazons" - 10 proven murders, among the victims - law enforcement officers, children. In addition to the killings, he was charged with banditry, illegal traffic weapons, many episodes of robbery, theft and assault on the lives of police officers. The same terms (15-20 years) were received and received by key members of the criminal groups of the “dashing nineties”, which accounted for dozens of human lives, banditry, robberies and robberies, and other serious crimes.

It is clear that the verdict in the Network case is intended not only to punish its participants for their planned actions, but also to frighten the rest of the potential radicals: they say you will create such groups - you will also sit for a long time. Tough sentences against radicals are becoming the norm. But, unfortunately, they do not always look justified in the eyes of society. For example, 19-year-old Yan Sidorov and 22-year-old Vladislav Mordasov received 6,5 years each in a maximum security colony for a picket that they staged in Rostov-on-Don. They were also accused of trying to revolution.

Meanwhile, the mere presence of people who are young and far from being the most antisocial in their way of life and behavior, ready to embark on the path of struggle with the authorities, the political system that has developed in Russia, is a very alarming fact.

Terrorists need to be punished, and punished severely. Members of extremist groups who are just about to embark on the path of terrorist activity must be punished in order to protect society and the state from them. And no lamentation about the punishment of “children”, who are 20-27 years old, in this case does not need to be taken into account. Adults, adults should understand what they are doing and what the consequences may be.

But without fighting the causes of their appearance and spread, terrorism and extremism cannot be defeated. And in each such case, one should not immediately speak of the “hand of Western intelligence services” or the “Ukrainian trace”. Unfortunately, the social reality in modern Russia is such that there are more and more people dissatisfied with it. The deepest social polarization, progressive poverty, corruption, isolation of government representatives from the people is far from a complete list of those reasons, which in themselves are enormous provoking factors for social fermentation. And these factors pose an equally serious threat to Russia's national security.

We are in Yandex Zen
The case of "Crimean terrorists." Sentence passed
Situational analysis of the death of the MH17 flight (Malaysian Boeing 777), made on the basis of engineering analysis from 15.08.2014
547 comments
Information
Dear reader, to leave comments on the publication, you must to register.