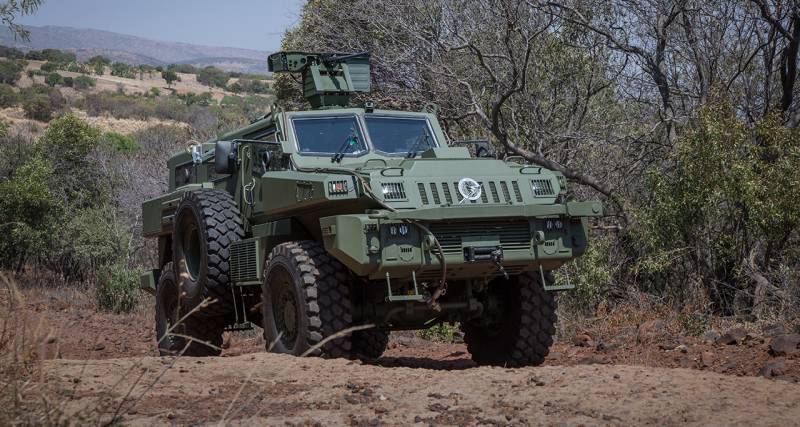 In 2013, Kazakhstan and South Africa agreed to launch a joint production of the Arlan armored wheeled vehicles (BKM), a modified version of the Marauder production armored car. These agreements were implemented, and the army of Kazakhstan received the latest armored vehicles. She still remains in the series, while measures are being taken to improve it.

From contract to co-production

History armored car "Arlan" (Kaz. "Wolf") dates back to the end of the two thousandths. In 2008, the South African company Paramount Group introduced the Marauder armored car, intended for sales on the international market. Soon negotiations began with several countries on the supply of finished equipment or on the launch of joint production.

At the beginning of the tenth years, a number of developments by the Paramount Group interested the Kazakh army, and negotiations began. Like some other customers, Kazakhstan did not plan to buy ready-made equipment, but was planning to launch its own production. The corresponding contract appeared in 2013. It envisaged the creation of a joint venture and the production of several BKMs at once. 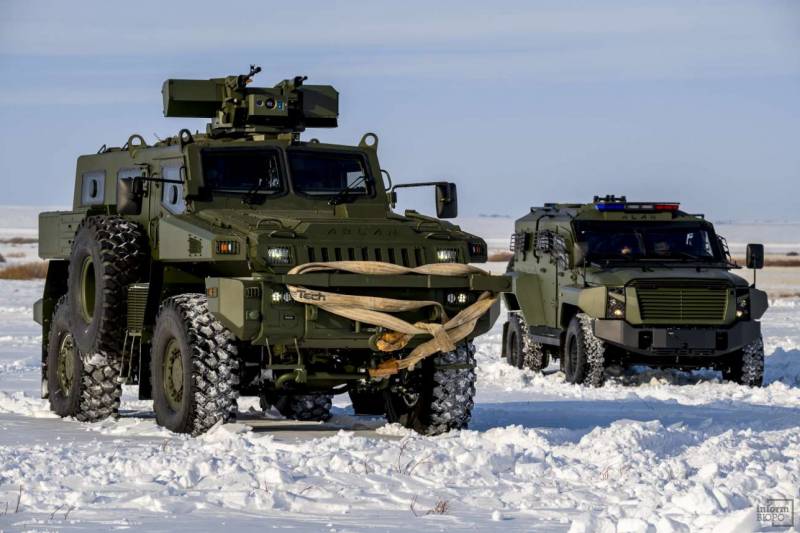 Arlan of Kazakhstan assembly with the Sunkar combat module. Photo by G. Bedenko / informburo.kz
Under the contract, Kazakhstan Paramount Engineering (KPE) was established. In 2014-15 near Astana, a plant was built, which was to carry out the assembly of armored vehicles. It was planned to make components for BKM on site and receive from South Africa. Initially, the degree of localization was only 20%, but soon it was brought to 70%. Local production of cases and other units was established. Then began the design of their own combat modules and electronics.

The first Arlan armored cars were built and handed over to the customer in 2017. Production is still ongoing, and there are regular reports of the transfer of the next batch of several dozen armored cars. In 2018-19. the army received about a hundred new cars. Search for potential customers among foreign countries.

BKM "Arlan" is a Marauder armored car with minor changes made at the request of the customer, taking into account operating conditions. By basic characteristics, two armored cars are identical. "Arlan" is a car class MRAP with developed bulletproof and anti-shatter protection. It provides transportation of personnel and can be equipped with weapons of various types. 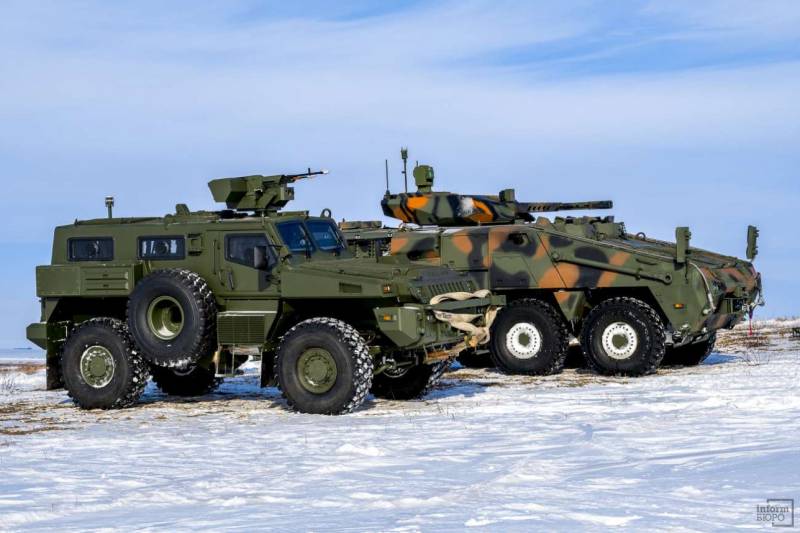 Arlan and Barys. Photo by G. Bedenko / informburo.kz
The armored body of the BKM Arlan has 3 levels of protection according to the STANAG 4569 standard. Protection is provided against non-armor-piercing 12,7 mm bullets and undermining of 8 kg of TNT under the wheel or underbody. The hull is divided into a protected engine compartment and a single habitable volume, accommodating the crew and passengers. Enhanced glazing is provided for a good view. All glasses, with the exception of the windshield, are equipped with loopholes for firing from a personal weapons. The bottom of the hull has a characteristic "mine" V-shape.

Under the hood is a 285 hp turbocharged diesel engine. with an automatic transmission. The car has four-wheel drive. The chassis is based on independent suspension; used tires 16.00 R20. The wheels are equipped with rigid inserts that allow you to move when breaking tires. Pneumatic brake system with ABS.

The protected volume accommodates up to 10 people. For the driver and commander, there are seats in the front of the compartment with access through their own side doors. Seven paratroopers get into the car and leave it through the aft doors or sunroofs. The habitable compartment, like the engine compartment, has a fire extinguishing system. 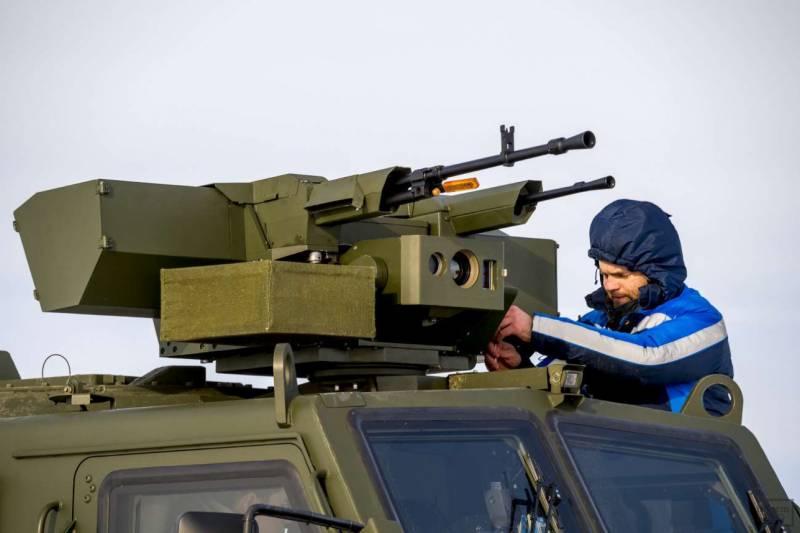 DBM "Sunkar". Photo by G. Bedenko / informburo.kz
The climate of Kazakhstan has led to the need to install some units. To start in the cold season, the propulsion system is equipped with heating means. The inhabited compartment is equipped with air conditioning.

The Arlan’s curb weight is 13,5 tons, the combat weight is 16 tons. The armored car has a speed of up to 100 km / h and has a range of 700 km. All-wheel drive chassis overcomes various obstacles. Water barriers intersect ford.

The basic Marauder project provides for the possibility of equipping an armored car with various weapons of various classes, primarily machine guns on turrets or remotely controlled modules. BKM "Arlan" retains such opportunities. For the installation of combat equipment, a round seat is used in front of the roof.

In the past, starting in 2016, the Arlans were repeatedly shown with different weapon configurations. At exhibitions and training grounds appeared BKM with machine gun DBMs of several types. Also showed anti-aircraft armored vehicles equipped with MANPADS. On his module placed optics and four TPK with missiles. 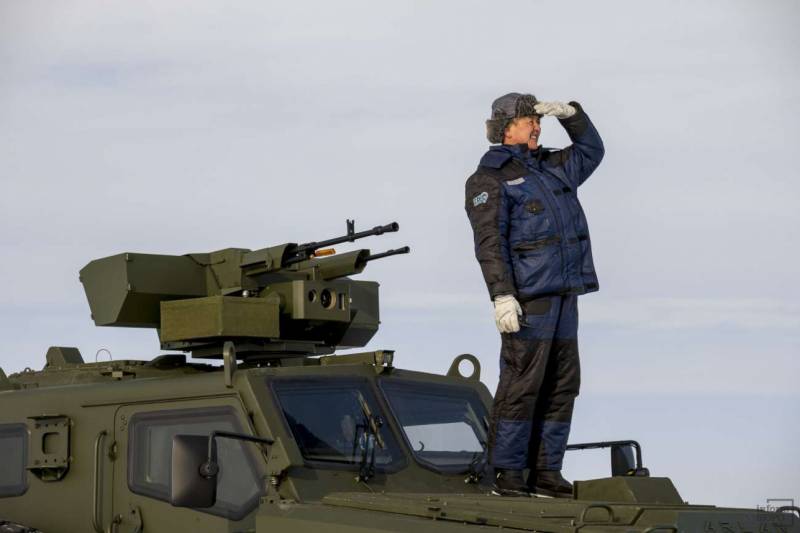 Preparation for test firing. Photo by G. Bedenko / informburo.kz
KPE continues to develop new weapons options for the Arlan. Fire tests of several samples of this kind are currently underway. Different types of armored vehicles with various types of weapons are displayed at the training ground. So, specifically for the "Arlan" created DBK "Sunkar" ("Falcon") with combined machine guns of various calibers.

The product "Sunkar" is a compact tower mounted on the roof of an armored car carrier. Management is carried out from the compact panel mounted in the cab. The combat module has an optoelectronic unit with a day and night channel. The armament includes a large-caliber NSV machine gun and a normal-caliber PKT product. The fire control system is built on the Shyla platform. Similar SLAs are used in conjunction with other KPE combat modules. At the same time, the Ansar DBM for the Barys armored personnel carrier is being tested. Also created a module "Turan", designed for installation on combat boats.

The "Shyla" system includes devices for arms and turret control, has an automatic target tracking system, ballistic computer, etc. A training mode is provided that allows the operator to be trained without using a separate simulator. 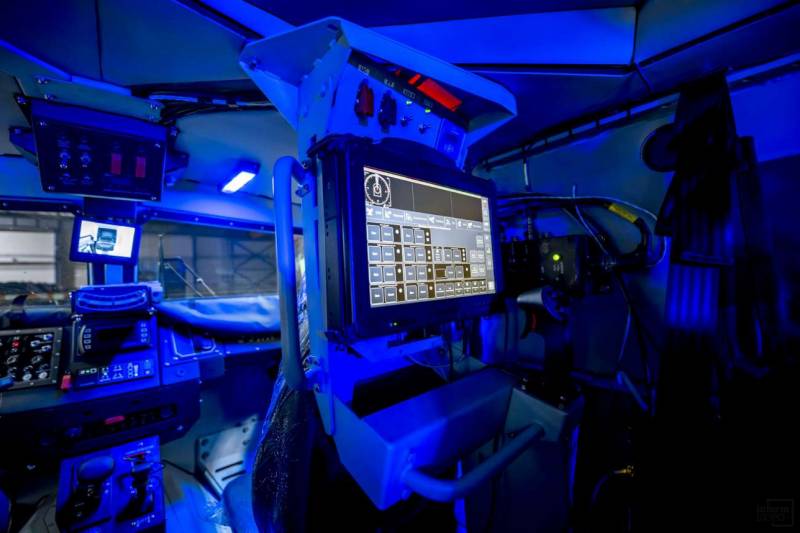 Remote control "Sunkar". Photo by G. Bedenko / informburo.kz
The advantages of "Sunkara" should include the small size and weight, as well as the presence of two machine guns with different characteristics. The module can fire with an elevation of up to 88 °; turret rotation speed - 110 deg / s. Due to this, the DBM can attack both ground and air targets. Range and effectiveness of fire for all purposes is determined by the characteristics of the products of the NSV and FCT.

DBKM "Sunkar" is still at the testing stage and has not yet been adopted. However, the development company is optimistic and hopes that the army of Kazakhstan will be interested in this product. The new module can show advantages over existing products, and its application will expand the combat capabilities of the Arlan. A new line of modules is planned to be launched on the international market. It is also possible to create promising products on the Shyla platform.

At the global level

It is believed that South African enterprises are included in the list of world leaders in the field of MRAP class armored vehicles. Accordingly, the Marauder armored car can be considered the next success of South African engineers in this area. All this is confirmed by the presence of a number of large orders, as well as contracts for the joint production of equipment. 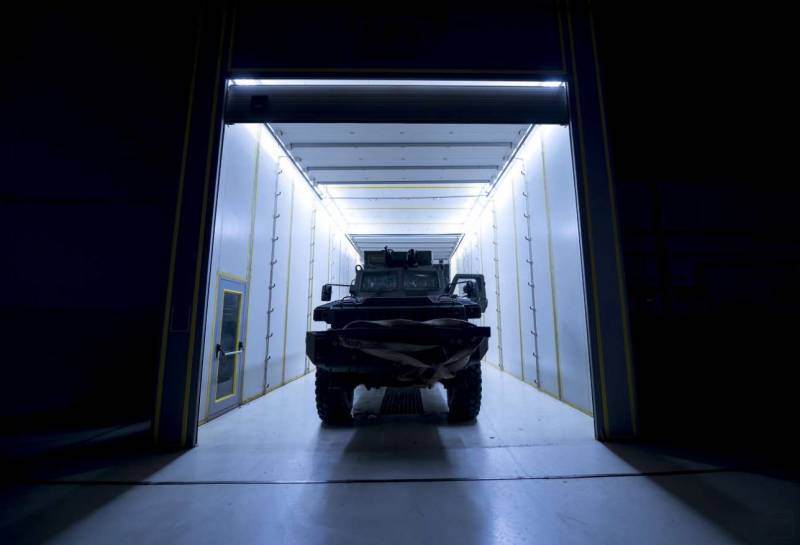 Photo by G. Bedenko / informburo.kz
At one time, Azerbaijan, Jordan and Singapore opened their own assembly lines for Marauders. A few more countries that do not have the necessary capabilities have chosen to purchase finished equipment. In 2013, Kazakhstan joined the countries wishing to master the assembly of equipment from their own and imported components.

To date, the army of Kazakhstan has received about a hundred armored cars "Arlan" with different equipment and weapons. In parallel, deliveries of other armored vehicles of South African development and co-production. These processes have a significant impact on the development of the armed forces and the building up of defense capabilities.

We are in Yandex Zen
Armored car "Nomad" (Kazakhstan / South Africa)
BMPT: work on the bugs
29 comments
Information
Dear reader, to leave comments on the publication, you must to register.