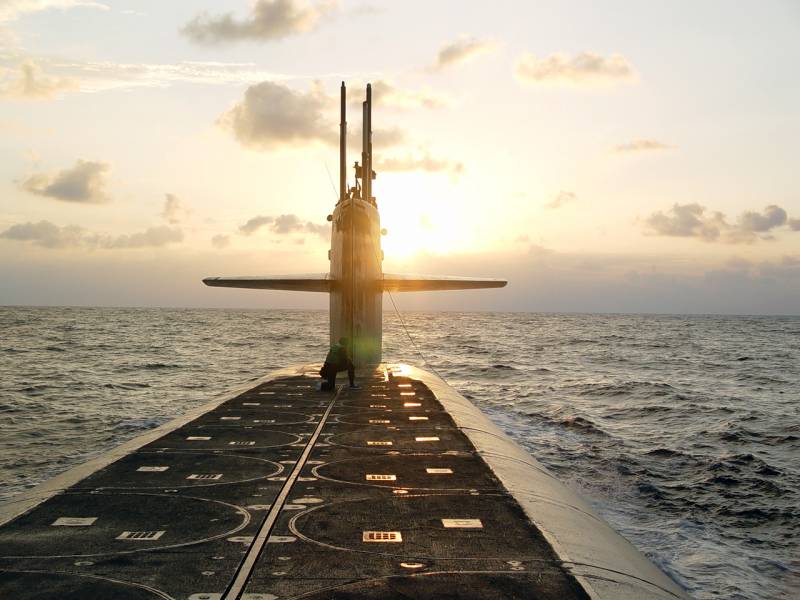 The topic of the article was born by itself, without the help of muses and Pegasus, when your humble servant deigned to bask under the gentle Crimean sun on the beach of the southern coast of Russian Crimea. The causal relationship of the course of lazy thoughts led to the rosy conclusion that even the main political event of the summer (the withdrawal of the United States Administration of the Treaty on short and medium-range missiles) can in no way affect the course of the holiday season, because after two weeks about it stopped talking even in specialized media. And so, as they say, silver spoons were found, but an unpleasant impression still remained, and the desire to provide an asymmetric answer to the world hegemon remained.


The largest and most modern part of the US nuclear missile potential is deployed on Ohio nuclear submarines with Trident-2 ballistic missiles and Tomahawk cruise missiles. Plans to replace them with a new generation SSBN Columbia are also long-term and realistic. Add to them SSBN of potential "partners" - the UK and France. We must not forget about the less deadly, but more dangerous for our SSBN nuclear submarines-hunters with missile and torpedo armament of this trinity. Therefore, we must try to find resistance to this serious and long-term threat, but taking into account the difference in economic opportunities and the geographical position of our countries.

What thoughts just can not be inspired by the morning breeze for a pensioner lying on the beach! Why did the prehistoric megalodons and modern killer whales and sperm whales not gobble up such defenseless invertebrates as the Portuguese boat (physalia)? Yes, because it is toxic! So it is in our world: where aircraft carrier strike groups and nuclear submarines with ballistic and cruise missiles on board are traded on the sea, it is necessary to create many primitive and cheap, but sufficiently "toxic" ships. And what could be more primitive than a sailboat, on which a nuclear reactor and rocket are available as a toxin weapon with special charges?

The previous paragraph explained the meaning of the second half of the title of the article. In the professional environment, the abbreviation BOD cannot be interpreted otherwise than as a large anti-submarine ship. And the number 3 implies three options for using the ship: as anti-submarine, as patrol and as pirate (yes, don’t be surprised - in the sense of “noble pirate”!), All three options are written with the letter “P”, and they can be combined.

If you unwind the sea history five hundred years into the past, during the era of great geographical discoveries and recall the masterpieces of sailing shipbuilding of mankind, we can easily find examples of ship trips lasting 2-3 years, when they crossed all the oceans along and across and, of course, made round-the-world odysseys. Antarctica and all the significant islands of the archipelago of the Arctic Ocean were discovered on sailboats. And what were the famous races of “Tea Clippers” and “Continental Blockade” of Napoleonic Europe! And examples from the history of sailing fleet of our continental country: the Catherine’s squadron off the shores of the self-proclaimed United States of America and regular sailing trips from the European part of the country to the Far East and even to the western coast of the same America ... Not a single ship of the modern Russian fleet, except for owners of nuclear reactors on board, can reach coast of the USA, complete the task of combat patrol there and return to base. On the other hand, a sailing military vessel without any problems will make such a round trip and gracefully patrol the waters specified in the order and proudly display the Russian flag. The model and example for the project of the new Russian large anti-submarine ship, in my opinion, can serve as the famous sailing ship "The Maltese Falcon", the description and appearance of which will not leave indifferent any true romance of the sea. Think about it: spend the millions of dollars spent on glamorous luxury and unimaginable conveniences for an elite audience to equip a ship with the best weapons of domestic production!

Since we were puzzled by the creation of a serious universal, but still large anti-submarine ship, its architecture and armament should be based on the capabilities and requirements for the placement of the best sonar system on board today, the creation of which is only capable of the domestic defense industry. This is Amphora with the nuclear submarine of project 885 Ash. I want to believe that he is really capable of hearing how gas shrimp in the Gulf of California. Judging by the generally accessible diagrams and materials about the Ash project, the dimensions of the spherical HAK antenna fit into the front compartment of the nuclear submarine, displacing even torpedo tubes from there, which violates the prevailing maritime tradition, but provides the ship with the highest possible information content. The diameter of the front compartment of the submarine of the Ash project is 10 meters, its dimensions and strength ensure the comfortable operation of the sonar system at the maximum depth of immersion, and when performing the function of the stem when driving at full speed. A completely solvable engineering task is to place the same or similar spherical antenna in the fairing under the keel of an anti-submarine sailing boat, making it on a rigid mount, with which it would be possible to remove the entire structure into the main hull of the ship. Such an engineering solution allows you to immediately expand the sonar field of view to the entire lower (read: underwater) hemisphere of the ship. If any submarine, and even an anti-submarine ship with a pair, or even three propellers in the aft end, working internal combustion engines and gearboxes, are actually blind in the rear hemisphere, and with an increase in the stroke it is guaranteed to stall in the front hemisphere, then on the sailing anti-submarine such problems simply cannot arise. At the same time, the presence of a decent ballast in the form of a huge fairing under the keel of the ship will positively affect the stability of the vessel and its seaworthiness. Undoubtedly, the speed characteristics of the sailboat will suffer, but they can and should be sacrificed for the benefit of the effectiveness of acoustic underwater reconnaissance. But on long-distance crossings to areas of combat use with a retracted fairing and full sails, the BPK-3 will quite argue with classic warships on an economical move. In addition to the capabilities to detect submarines, provide for placement on a ship and a towed passive extended antenna. And in order to seriously force ourselves to respect all the submariners of the world, two anti-submarine helicopters with weapons and detection equipment corresponding to this class of vehicles will be placed on the ship.

The following combination can be considered as the main armament: two UKSK 3S14 vertical launch launchers, an anti-torpedo defense complex, and two anti-aircraft missile-cannon complex “Shell M”. To combat the submarine, it is enough to have in the ammunition missile and torpedo family "Caliber" 91rt2 in the amount of eight pieces and four missiles to strike at the base of submarines or other objects of military infrastructure and in the anti-ship version. The same weapons can repel both torpedo and missile attacks of the submarine itself. The appearance of such a military unit in neutral waters at the base of the likely enemy’s submarines and near the protected area of ​​the combat duty of our SSBNs cannot be ignored.

The use of wind energy for the ship’s movement makes any corner of the planet accessible to it and provides phenomenal autonomy, which, in turn, greatly depends on the crew’s habitability conditions. Unfortunately, the elements of the winds are changeable, capricious, and sometimes dangerous. Two water-jet propulsion drives driven by electric motors will help the team to avoid many problems both in full calm and in a storm with an overcast wind. The source of electricity will be the second "toxin" on the ship - a compact nuclear reactor! Its power should provide with a reserve both the movement of the ship with a low-noise stroke of 4-6 knots, and the uninterrupted reliable operation of the entire set of weapons and sail control automatics, and, of course, the entire imaginable crew life support infrastructure (water desalination plants, refrigerators, air conditioners, a galley, a sauna , laundry, etc. etc.). Even a set of battery batteries, as in diesel submarines, will not be superfluous as a backup source of energy and ballast.

Predicting skepticism about the implementation of such a power plant, I read information about the Losharik nuclear submarine. The entire energy-moving complex of the ship with 2000 tons of displacement occupies no more than half of its 70-meter length and fits into the overall width of only 7 meters. And there is enough power to develop a full stroke of 25 knots! If we hypothetically discard ballast tanks, the prohibitive thickness of the titanium hull in the form of spherical segments for deep-sea diving, and other bells and whistles for a submarine, then it’s quite realistic to fit such a nuclear propulsion system for a surface ship into the hold of a sailing ship, even such as the Malta Falcon . For reference and further reasoning: the displacement of the Falcon is 1240 tons; body length 88 m; midship width 12,6 m; draft 6 m; mast height 58 m; sail area 2400 m2; sailing speed up to 15 knots

And now we turn on the imagination and imagine our BPK-3 with a hull displacement of 5000 tons in the form of a similar sailing ship! Comparable to the domestic four-masted barque Kruzenshtern. A real ship with almost a century of history of operation. If you leave the sailing armament in the front of the ship practically unchanged as on the three-masted "Malta Falcon", and increase the hull length to 130 meters, then at the stern you can afford to place a hangar for a pair of anti-submarine helicopters with a landing site. With the indicated displacement and length, the remaining dimensions of the ship will naturally change: width at midship is 15 m; draft 7 m; mast height 60 m; sail area 2500 m2; sailing speed up to 12 knots Of course, all these numbers are sucked from the finger, but offer your own options!

The development of the project and the construction of a series of such ships in domestic shipyards and with Russian components will be no more expensive than a patrol nuclear icebreaker or frigate. The non-Ukrainian nuclear power plant, modern Russian weapons and electronics, I hope, should not have any problems with the corps. But what about the masts and sails a la "Malta Falcon", can we? We will discuss in the comments.

And something like this will begin to patrol deployment routes and submarine duty areas, first off our shores, and then appear at Guam, Pearl Harbor, Bangor and Norfolk ... What will be the reaction of the “partners”? I think we will hear and learn a lot of interesting things from the life of the submarine fleet of a potential enemy. And this is only an anti-submarine use of the ship. If you load 16 “Caliber” in long-range execution into the UKKS and go on patrol in the Mediterranean Sea or the Gulf of Mexico for a couple of months, the Air Force generals responsible for air defense of coastal countries and states will strain. Of course, the pirated use case is exotic, but such actions may well be provided for in separate orders in packages on the ship, which are opened by separate order or at a specified point in the oceans.

We are in Yandex Zen
US military will not give up nuclear weapons
What kind of nuclear forces does Russia need?
44 comments
Information
Dear reader, to leave comments on the publication, you must to register.