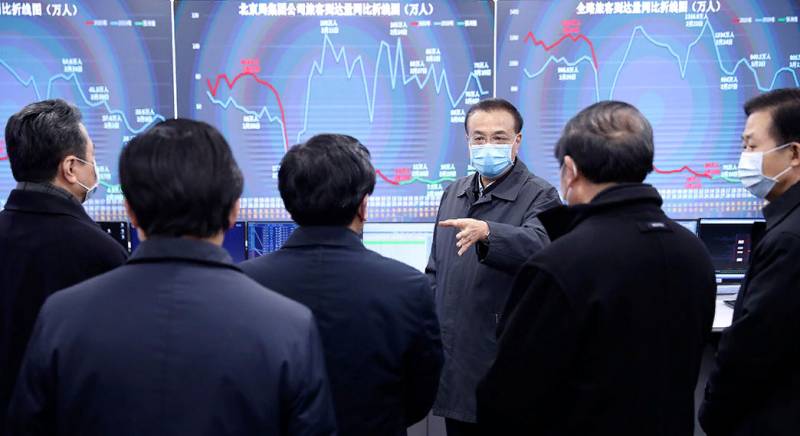 The world, greatly frightened by the epidemic of coronavirus in China, is gradually moving away from the blow and begins to analyze how the Celestial authorities cope with the problem that has come over the country.

This is an extremely difficult matter. Hubei Province, where the new infection came from, is inhabited by more than 58 million people. Close to what are, for example, such large European countries as Italy (60 million), Great Britain (62 million) or France (65 million).

It turns out that the whole country immediately went into quarantine with the evacuation of millions of people, with restrictions on entry and exit, on movement in urban areas and many other bans that the local population implicitly obeyed.

In this connection, I recall a recent incident in St. Petersburg where a young lady who flew from China escaped from a hospital where she was quarantined with suspected coronavirus. The frivolous lady broke into the electronic lock of the quarantine box and disappeared.

Very soon, she began giving interviews to local media outlets, telling them about her civil rights and the lawyers supporting her. The lady was returned to the hospital through the court and was even punished with a fine of 500 rubles for not complying with the lawful order of the body exercising state supervision (part 1 of article 19.5 of the Code of Administrative Offenses). Around this stories a lively discussion has now unfolded on the networks.

In China, such an irresponsible act is impossible by definition. A system of social trust has been operating here for a long time, based on the “black” and “red” lists. The “red” list includes people for good behavior.

For example, for donating blood at donor points, people will not only be included in the privileged list, but they will also be given a special card with a 50% discount on travel in public transport. Such incentives can be obtained for the help of the police, other manifestations of civic responsibility and honesty.

It is easy to get into the “black list” for an offense similar to the “arbitrariness” of our Petersburger, which, as a result, the court sent for forced hospitalization. The list of black sins is long. Here is a violation of traffic rules and baggage rules in public transport, failure to comply with court decisions and disobedience to the requirements of the authorities, failure to repay loans on time and behavior on Internet networks ...

Those who are on the "black list" lose their jobs in state institutions. They are forbidden to occupy managerial positions, they are denied air tickets and sleeping places for night trains, places in luxury hotels and restaurants.

For people who do not comply with public decency and rules, a substantial list of restrictions has been established. Moreover, once in the "black list", getting out of it is not at all easy. Western truth-seekers have dubbed the Chinese system a "digital concentration camp." However, now, looking at the discipline prevailing in quarantine Wuhan, languages ​​bit by bit. Because the actions of the Chinese authorities protect the critics of China themselves from the dangerous infection.

What Western experts have to admit

The power system in China is generally similar to other countries. Throughout its vertical, it combines the legislative (assembly of people's representatives) and the executive (government at all levels) branches of government.

However, there are two significant differences, for example, from Western democracies. Firstly, it is a strict vertical subordination from the bottom up. Secondly, the presence of committees of the Communist Party of China, acting both as an arbiter of power and independently making decisions important to society.

There was such an episode in the story of coronavirus. President Xi Jinping convenes a Standing Committee of the Politburo of the Central Committee of the Communist Party. The meeting discussed the issues of prevention and control of the epidemic and decided to send an additional 2600 health workers to Wuhan to fight against coronavirus.

The order went to the grassroots party committees. People were picked up there, instructed. One of the nurses then shared on the television plot her impressions of the meeting in the party committee. The functionaries of the Communist Party called on doctors to sacrifice themselves in the name of the country and society in this difficult time for China.

The sister confirmed to the correspondent her willingness to work in Wuhan, regardless of the threat to her own life, and even her willingness to sacrifice her life, if circumstances arise. Her mood can not be explained by any lists of civil liability. Most likely, this is the result of public education, known to us since Soviet times.

It is supported by a high level of exactingness to officials and party functionaries in power. For them, there is a system of prohibitions fixed in party and government decrees. Civil servants are forbidden many things. It even comes to such trifles as smoking in public places. For this violation in China, an official can easily lose his job.

Western observers ironically look at these rules of Chinese life. They say about human rights and other values. However, now they almost unanimously admit: the current system of power in China has helped to combat the acute and dangerous epidemic, which literally tests the entire power system of the PRC. In the absence of social discipline, a clear social system, its consequences could be more tragic.

We are in Yandex Zen
Chinese coronavirus: truth and myths
Strangulation: the context, conduct and consequences of the American naval blockade of China
78 comments
Information
Dear reader, to leave comments on the publication, you must to register.