Washington Christmas raid: the defeat of the Hessian mercenaries in Trenton 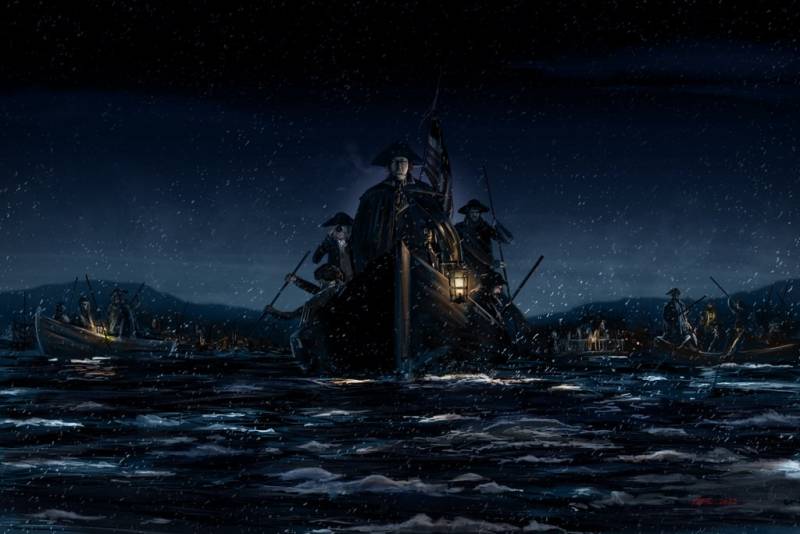 Washington was one of the first to cross Delaware

The fall of 1776 was a real nightmare for the Americans who rebelled against British rule. They were not just beaten hard and kicked out of New York, but driven on. To make matters worse, the Washington army was losing a soldier at a monstrous pace. People painfully experienced setbacks and believed that the struggle for independence seemed to fail. And they fled home - no one wanted to stand trial for treason.

The British acted methodically. Having driven the Americans across the Delaware River and knowing that the enemy is desperately suffering from desertion, they did not rape themselves with cold crossings, but quietly dispersed to the winter apartments in New York. To wait for spring and calmly, with fresh strength, walk to Philadelphia - the informal capital of the rebel colonies. To disperse the Continental Congress and cover the bench.

Washington understood that this could not be allowed. He faced two problems. The need, if not stop, at least slow down this future march of the British, and a bright, albeit tactical victory here and now. The latter is to encourage those who are still left and to recruit new recruits tomorrow, before his army has completely melted.

This could only be done by striking at the right place.

Fortunately, the British themselves provided opportunities for such an attack, having diverted the main forces to New York and giving the initiative to the barely alive, as it seemed to them, Americans.

Yes, they could not be destroyed. Begin Washington to beat the British one at a time, as they would leave the winter apartments, they would unite and put an end to it. The American commander understood this. He was not interested in annihilating the enemy, but in the stockpiles he had prepared. One of them was right on the "English" coast of Delaware, in the town of Trenton. The other is in Princeton (20 km) and the third in New Brunswick (another 26 km).

The goals were quite affordable: it was possible to deliver a sudden blow and reach all the stores with a forced march. Having ruined them, it was possible, if not disrupting, then at least slowing down the 1777 campaign for the enemy. And, most importantly, to do all this was obtained by very moderate forces. Warehouses were guarded by relatively small detachments of Hessian mercenaries who did not seriously expect that the Americans, who were beaten in the fall, were capable of at least doing something.

In a word, the moment was perfect, and Washington did not miss it.

Among other things, he chose a good time - while the enemy celebrated Christmas or moved away from this pleasant event. The Americans began to focus off the coast of Delaware on Christmas Eve - on the evening of December 24. In total, 2400 people were able to gather.

In Trenton they were opposed by about 1500 Hessians - a number that allows us to hope for success. But they still had to be reached. Crossing the river was to be 15 kilometers from Trenton. Today, a bridge has been laid at the crossing point, a park with the saying “Washington Crossing” has been laid out nearby, and the Patriotic Tavern operates at the services of tourists following in Washington's footsteps.

Everything had to be done at night. It all started on the evening of the 25th. At first, everything went briskly, but the gunners slowed down the matter - their 18 guns were regularly stuck in the attacking deep snow. And the ice, wind and Delaware did not speed up the process. But by 4 a.m. on the 26th, the Americans completed the crossing.

All that remained was to attack the Hessians.

For the speed of the march, the Americans had to split into columns and move to Trenton along two roads. And a real small victory for the still inexperienced fighters: both columns managed to be brought to the city almost simultaneously.

And the Hessians, apparently, continued to shockly celebrate Christmas. At least, the concentration and crossing of the Americans remained an absolute secret for mercenaries from Germany. The garrison headed by Colonel Roll quietly sniffed in bed - so when the Americans entered the city, no one prevented them from placing guns on the largest streets. After that, thinking about some intelligible resistance was naive. 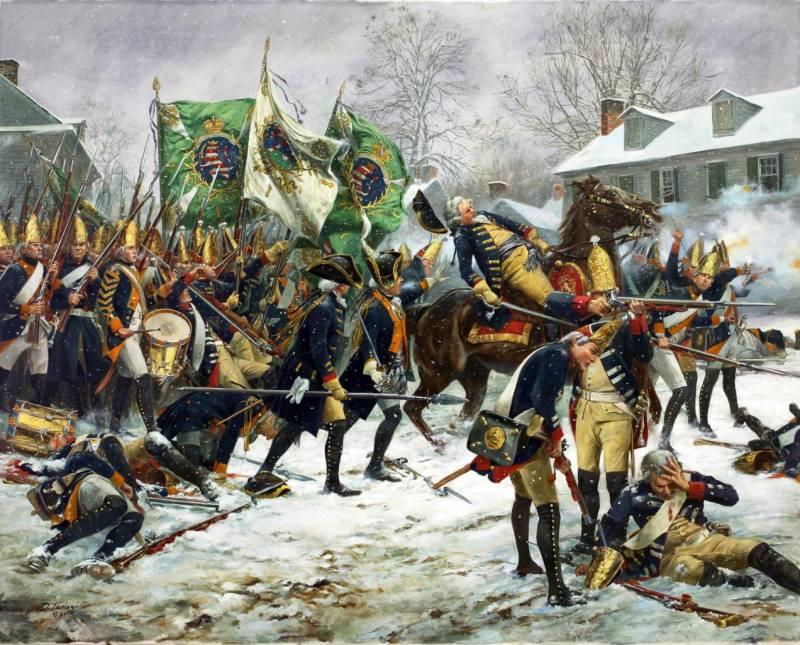 The death of Colonel Roll brushes battalist Don Troyani
It was a complete rout. Roll jumped out into the street and even tried to lead something. But soon fell from the American bullet. After this, the last hopes were lost, and there were three ways out for the Hessians: to die in battle, to flee the city in horror, or to give up. Caught by surprise, the mercenaries were in no hurry to die - only 22 people died. Five hundred managed to escape, and a thousand were captured. The Americans themselves had only two corpses, and even those from frostbite during an unsuccessful crossing.

But with the development of this success, everything was not so clear. At least not right away.

Washington received intelligence: superior forces of the Hessians moved towards it. Based on the fact that you can’t take risks with the army, he immediately crossed back over Delaware - since it was easier during the day and near the city, where there were moorings.

But the news turned out to be complete misinformation - in fact, there were no major forces, and all the Hessians in the district fled to New York without looking back.

It would seem that what has been done is done - not to dangle back through not the smallest and quietest river. But the case helped the Americans. 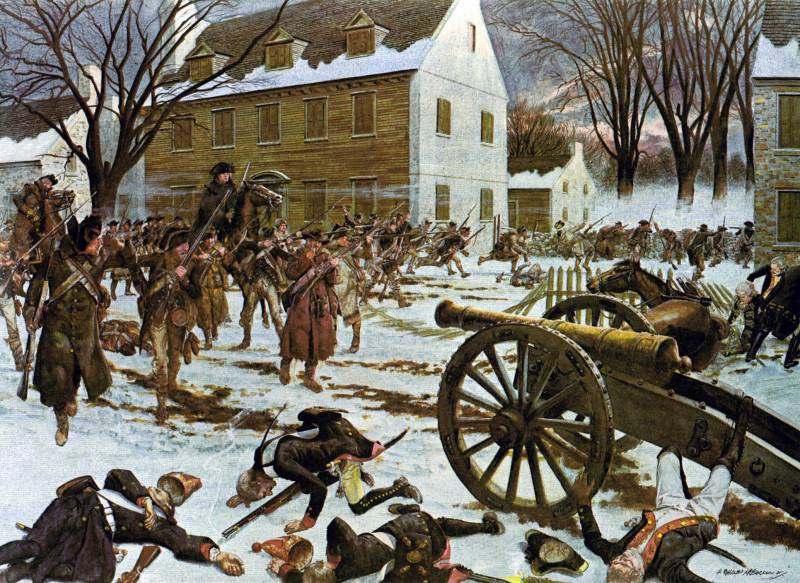 Half-ravaged Americans pounding Hessenians
The fact is that in addition to the main attack, Washington planned auxiliary, but the units assigned to them simply did not master the crossing. And the commander of one of them, burning with shame, now considered this a matter of principle. Therefore, he simply took his people, and, without asking anyone, crossed and occupied the city of Burlington, where he was supposed to get at the very beginning.

Washington could not ignore this - as well as ordering him to cross back without losing authority. Therefore, he came to the aid of a negligent commander along with the main forces. Just in time to meet with the army of British General Cornwallis, arrived in time from New York.

And on the run again

Numerically, both groups were approximately equal, but the absolute superiority in quality was, of course, among professional Englishmen. Fighting with them in the open field was a crazy idea. Therefore, it was worth staying in the city.

The British, deciding to forge the iron while hot, tried to take possession of the latter with a swoop, but the deal failed. Then they decided to spend the night and take up the assault in the morning, more thoroughly. But it was too late — the Americans left at night. Of course, someone had to be left behind — so that they would burn bonfires, make noise and create the false impression that the city was full of soldiers.

When morning came, Cornwallis realized that he had been fooled, and immediately rushed to New Brunswick to defend his warehouses. However, he could not be afraid for them - the Americans were exhausted enough to do something more serious than trying to get into winter apartments somewhere. 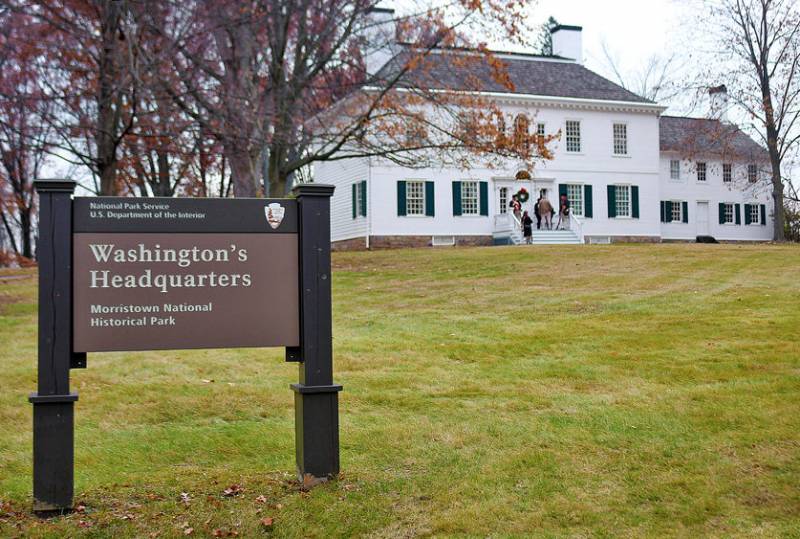 House in Morristown, where Washington was headquartered
Washington decided not to cross through Delaware due to the large enemy army, but to reach the town of Morristown, some 50 kilometers from New York, where it would temporarily settle. Cornwallis didn't bother him. After making sure that the warehouses for his army were safe, he returned to New York and began to wait for spring. It seemed to him that the capture of Philadelphia would put an end to all these meaningless throwings.

But thirteen colonies were not Europe and it was impossible to win the war by European methods (through the seizure of the capital). Ahead of the British were only bitter disappointments.

We are in Yandex Zen
Chernobyl notebook. Part of 3
My grandfather's front-line letters (part 2)
21 comment
Information
Dear reader, to leave comments on the publication, you must to register.