Escape: US Air Force does not want to be a priority 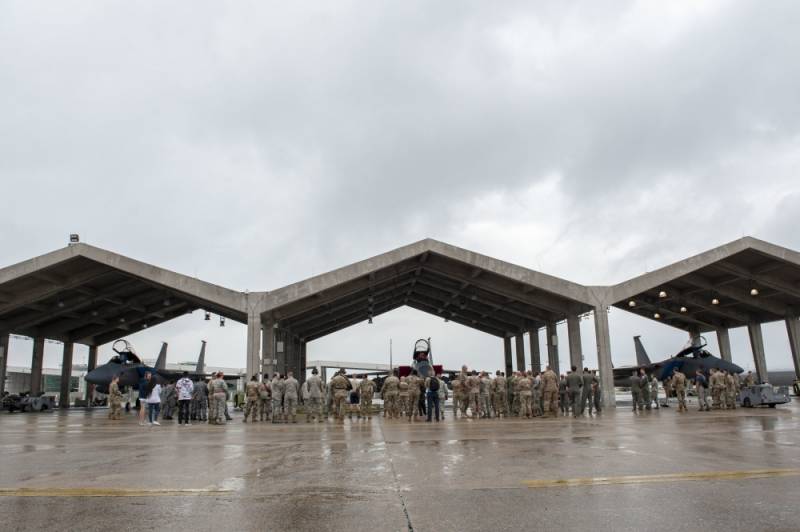 Various United States Air Force units are serving at bases around the world, which determines their combat capabilities. At the same time, large bases are a priority target for a potential adversary. In the event of a full-scale conflict threatening all major bases, the command is preparing new concepts of deployment and dispersal.

The Pentagon is seriously considering Russia and China as potential adversaries, and is also trying to figure out possible risks. One of the main risks directly affects the prospects and potential of the air force. The command of this kind of troops fears that if a conflict starts, the enemy will inflict powerful and accurate strikes on the main aviation bases. Having lost even part of the aircraft, weapons, fuel, etc., the Air Force will not be able to effectively carry out the assigned tasks.

The stability of the Air Force in a war with a powerful enemy is one of the main issues of recent times. So, last year the Center for Strategic and Budgetary Assessments in its report called for more attention to be paid to the defense of air bases. It was also proposed to increase funding to improve this area.

Commander of the US Air Force in the Pacific, General Charles Brown, commenting on such issues, bluntly stated: "You can’t sit at large bases and be big targets." As a solution to the problem, he proposed enhancing the strategic mobility of the connections and providing dispersibility.

In a couple of sentences, General Brown expressed all the basic plans of the Pentagon, worked out in recent years. The concept of Agile Combat Employment ("Flexible combat use") is proposed, aimed at a sharp increase in the mobility of aviation units - to maintain their stability in any conflict. 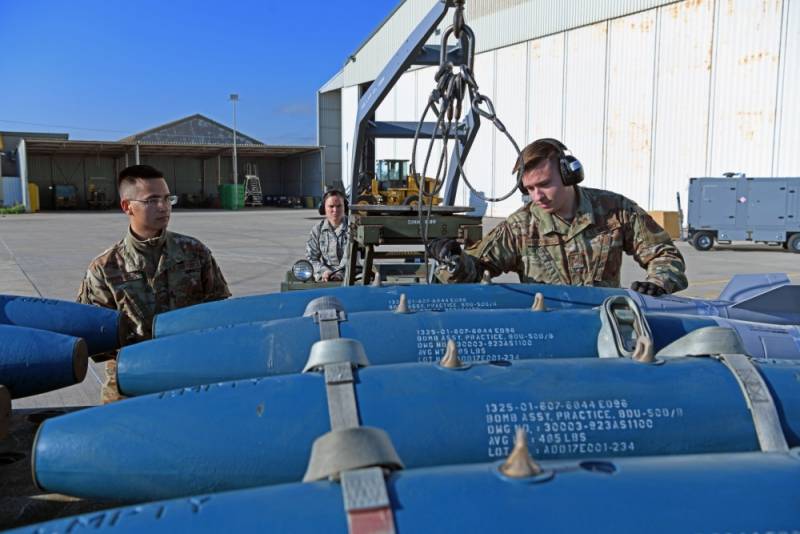 The essence of the ACE concept is quite simple. Parts of the Air Force should be able to quickly relocate and / or disperse to different airfields, and then continue to perform assigned combat missions. However, the conduct of such events in modern conditions should be associated with certain difficulties and may require special funds.

At the end of January, Pacific Air Force Deputy Commander Major General Brian Killow noted problems. Unlike the European contingent, the forces in the Pacific Ocean do not have a developed network of railways and roads, which makes deployment and deployment difficult. We have to rely only on air transportation, and because of this there are special requirements for the material part.

General Killow recalled that for the operation of the aircraft requires a variety of equipment and equipment, and almost every type needs its own equipment. In addition, part of the aerodrome equipment has changed little over the past half century and remains difficult and inconvenient for transportation. Accordingly, the study of issues related to the improvement of equipment has begun. The logistics team is already conducting relevant research.

At the moment, within the framework of the ACE concept, several basic approaches and solutions are proposed for a real increase in the mobility of the Air Force. Most of these solutions require the development of new systems of various kinds. The design of various technical means is also being carried out, simplifying both the transfer and work in a new place. 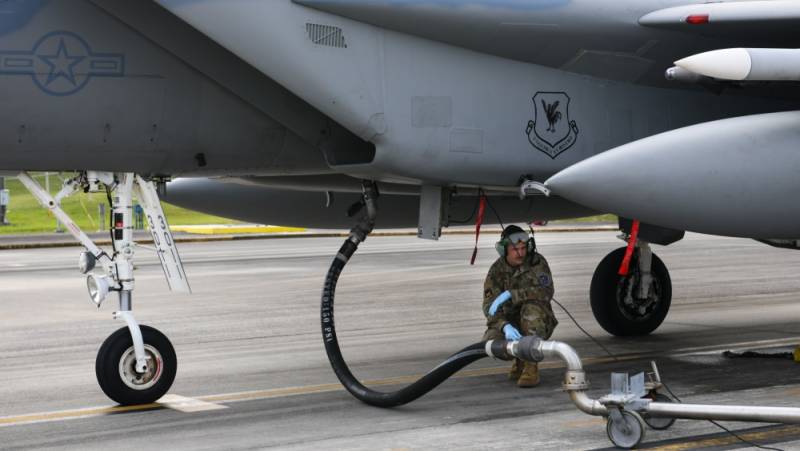 The ACE concept provides for the transfer and dispersal of small units, down to the links of 2-4 aircraft. Almost any aerodromes or airports in the region are suitable for basing such a link. Along with the link of combat aircraft, transporters with equipment for their operation, weapons, etc. should arrive at the deployment site.

Placing the aircraft of one squadron at different aerodromes, as they say, will not hit their combat effectiveness. The Air Force has developed means of communication and control, allowing you to plan effective operations in various conditions. Due to competent management, refueling in the air, etc. the squadron will be able to collect from different bases and complete the task. Then the aircraft will be able to return to the places of temporary deployment.

In order to ensure the operation of aircraft at temporary bases, a Regionally Based Cluster Pre-position Kit (RBCP) is being created. The system of modular architecture will include the necessary means of communication, maintenance, etc., with the help of which any airfield can become a full-fledged air base - but only for 2-4 aircraft. RBCP kits can be stored at large air force facilities and transported to deployment sites in the event of a threat.

Ready-made RBCP kits are not yet available; The MTO command has not yet completed the necessary work. However, the first practical experiments have already been planned. The Air Force is going to assemble several of these kits from available airfield equipment. This will allow you to evaluate the concept, find its strengths and weaknesses, as well as gain the necessary experience. What equipment will be included in these kits and what equipment they can provide is unknown. 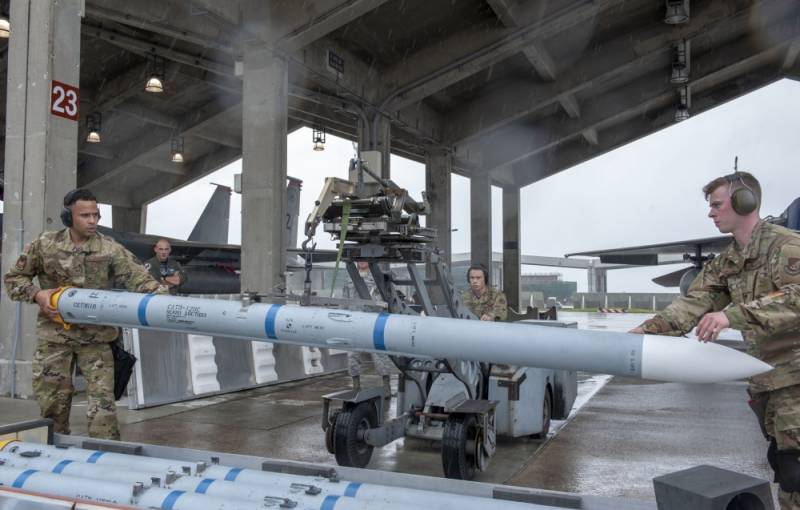 This year, an “experienced” RBCP kit of available items is planned to be delivered to Australia to provide joint Pitch Black exercises. It is not planned to pick it up - Australia will be able to use the kit for its events, but if necessary, it will receive and service US planes.

For now, the RBCP kit is proposed to be made up of available production samples. If this concept shows its viability, the MTO Command will be able to complete the development of kits that initially meet specific requirements. Their exact composition is still unknown, but some general considerations have already been announced.

First of all, it is necessary to improve aerodrome equipment, which has not changed much in recent decades. Due to the modern elemental base and more advanced architecture, power units, control and calibration systems, refueling equipment, etc. should be smaller and lighter, making it easier to airborne them.

The possibility of introducing fundamentally new solutions is being considered. In particular, exoskeletons can be offered to technical staff. This will allow us to solve existing problems, reduce the burden on people, and also provide an opportunity to abandon some means of mechanization. 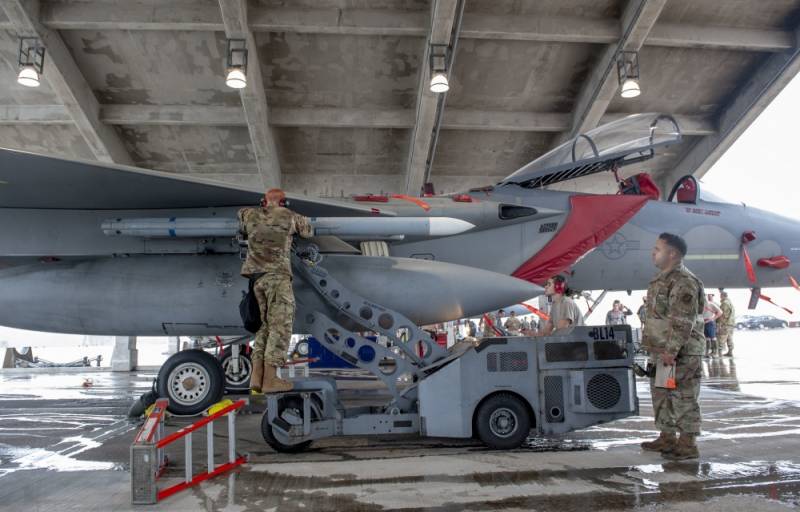 Which of these proposals will be implemented, and what will be their results - time will tell. The exact deadlines for creating a full-fledged RBCP kit suitable for deployment in the military are not yet known. The logistics command continues to work, but is not yet ready to show its real results.

It should be noted that the basis of the new concepts being worked out by the US Air Force are long-known ideas. Moreover, plans of this kind already exist and must be implemented in appropriate situations. During the threatened period, the Air Force will have to perform dispersal, which will not allow the enemy to disable them with a minimum number of attacks.

However, such plans need to be improved and adapted to modern conditions. It is necessary to optimize, speed up and reduce the cost of the established procedures for the transfer of squadrons, as well as to develop new measures for the deployment of links. For this, it is necessary to create and test new methods and procedures in practice, as well as develop and put into operation promising samples of the material part.

It can be assumed that the concept of ACE and dispersal as a whole is not a remedy for all problems. It does not exclude attacks on bases with known losses. In addition, a developed adversary will be able to track the transfer of units and take appropriate striking measures. Thus, even an optimistic scenario does not exclude certain losses - although it makes them noticeably lower than possible under other circumstances.

Work on the ACE concept continues and is gradually entering new stages. Certain elements of this concept are already being applied during the exercises, including in third countries. Other components are not yet ready, but should be available in the near future. If the Pentagon succeeds in fulfilling all its plans, then the stability of the Air Force will be sufficient to collide with a developed probable enemy. However, the timing and price of such results remain unknown.