GAU-5 / A for emergency situations. In the US Air Force master the survival rifle 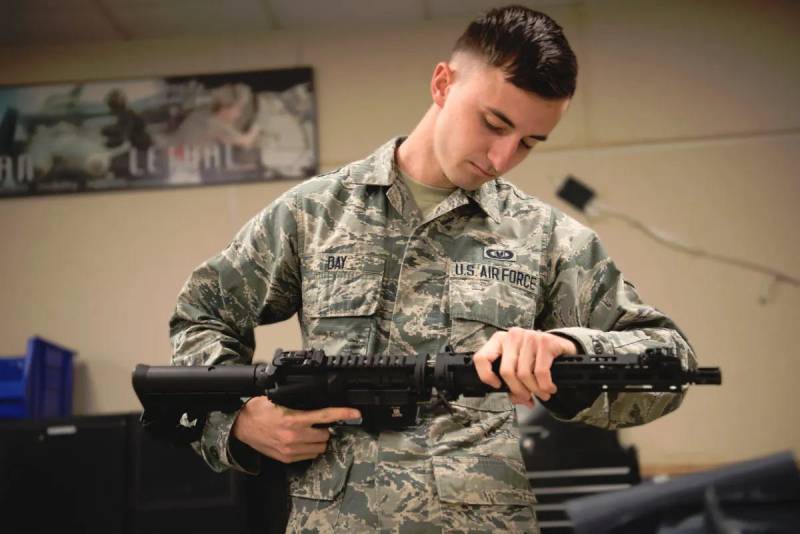 The fighter is assembling a rifle. First, he must enter the breech of the barrel into the receiver, and then close the side locks

For many decades, the US Air Force pilot’s wearable emergency reserve (NAZ) has been equipped with one or another gunshot weapons. Not so long ago, the new "survival rifle" GAU-5 / A was adopted. A significant number of such products were manufactured in the shortest possible time, and they had already managed to take their place in the NAZ.

In mid-2018, the US Air Force revealed data on the Aircrew Self Defense Weapon program (“Crew Self-Defense Weapons”), and also showed its result - the promising rifle GAU-5 / A. This product was intended for transportation in NAZ containers, due to which it was distinguished by its low weight and the ability to disassemble into components for optimal installation.

By that time, the Air Force Life Cycle Management Center (AFLCMC) managed to complete the development and launch serial production of new weapons. The production was assigned to USAF Gunsmith Shop gunsmiths based at Lackland (Texas). According to the plans of 2018, the Air Force required 2137 new type of rifles.

Rifles GAU-5 / A began service last spring. The first operator of such weapons was the 3rd wing of the Air Force, located at the base of Elmensdorf-Richardson (pc. Alaska). First of all, the rifles were intended for pilots of F-22 fighters. Then, shipments of ASDW to other parts were reported. 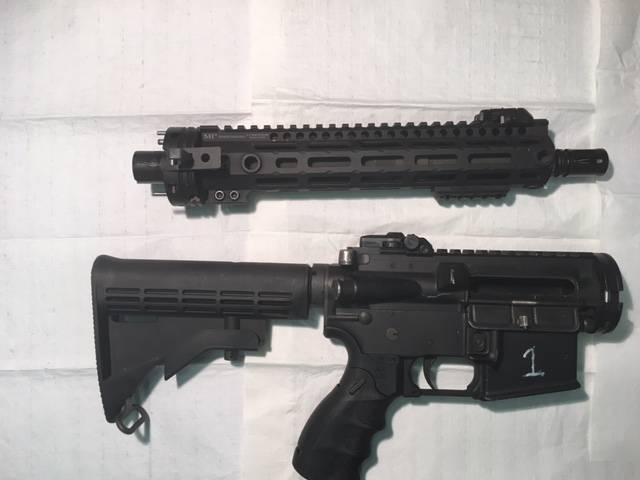 Rifle GAU-5 / A disassembled
A few days ago, on February 14, AFLCMC summed up the ASDW project. In about two years, 2700 GAU-5 / A rifles were manufactured - almost 600 more than previously planned. The total cost of weapons reached $ 2,6 million. This completes the production. The needs of the Air Force are fully provided, and new "survival rifles" are not yet required.

It should be noted that the designation GAU-5 / A is not used for the first time. In the past, the CAR-15 Commando carbine rifle, designed for the US Air Force, had such a name. Subsequently, it was renamed to GUU-5 / A. After several decades, the “freed up” index was used in the current project.

The goal is compactness

Under the ASDW program, the customer required to create a 5,56x45 mm cartridge rifle suitable for combat at distances of up to 200 m. At the same time, it was necessary to ensure the possibility of placing weapons in the NAZ container for the ACES II ejection seat. If necessary, it was allowed to make the rifle collapsible - in this case, assembly before use should have taken no more than 60 seconds.

AFLCMC solved the tasks in the simplest way. The basis for the future GAU-5 / A took the existing M4 rifle. The original design was finalized using several components available on the market. 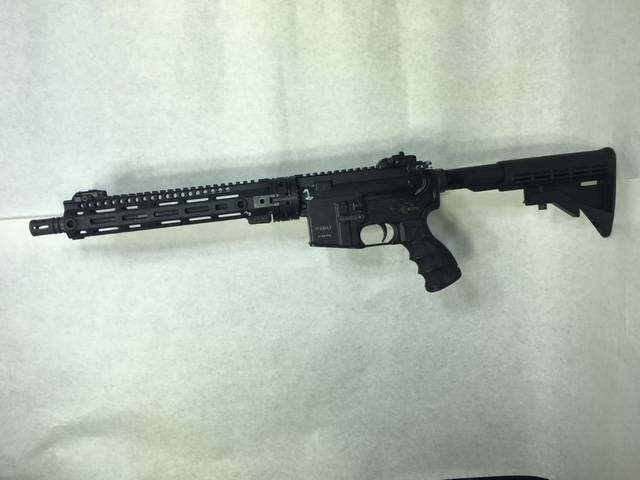 Product after assembly
The upper receiver, barrel and forend are made with connectors Quick Release Barrel (QBR) developed by Cry Havoc Tactical. QBR allows you to remove the barrel with the forearm and put it in a container separately from other parts, reducing the required space. The QBR system is based on two washers (on the box and on the barrel) with side locks that firmly hold the barrel and receiver. Removing or installing the barrel takes about 60 seconds. The use of QBR does not affect the performance of the gas exhaust system and automation in general.

The standard fixed pistol grip is replaced by the FAB Defense AGF-43S Folding Pistol Grip. In the transport position, the handle folds by turning back and fits under the butt, which reduces the height of the weapon, and also optimizes its contours for a more dense styling.

The upper edge of the forearm and receiver are equipped with standard trims. On the GAU-5 / A they are used to mount a removable front sight and sight. In order to reduce the dimensions, folding sights were used. Installation of other systems is not provided - due to restrictions on size, weight and firing range.

Otherwise, the "survival rifle" GAU-5 / A is no different from the standard M4. The latter adopts the lower receiver, complemented by the upper unified design. The bolt group and ammunition facilities also do not differ from the serial ones. The trigger mechanism received a firing mode with a cut-off of 3 shots - to save ammunition. 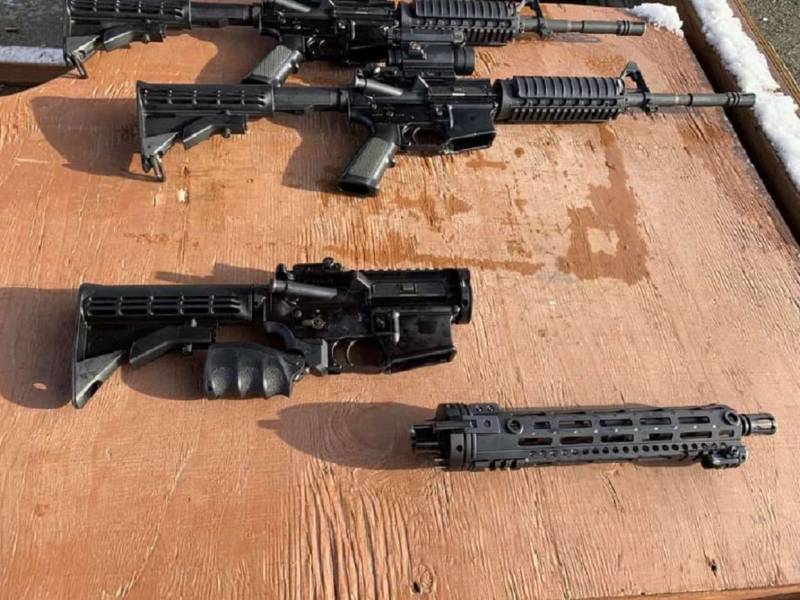 Rifle M4 (top) and GAU-5 / A in the configuration for laying in the NAZ. The gain in size is obvious
The collapsible architecture of the weapon made it possible to fulfill the main requirement of the customer. The GAU-5 / A rifle meets the requirements for firing characteristics, but it can easily fit into a container of limited dimensions. In the case of modern NAZ for ACES II seats, we are talking about a space of 16 x 14 x 3,5 inches (406 x 355 x 89 mm). The total weight of the NAZ is 40 pounds (18 kg). The rifle weighs less than 7 pounds (3,1 kg).

In a recent publication, AFLCMC showed how a disassembled rifle fits into a NAZ. At the top of the container is the main part of the weapon. Butt, handle and scope fold. Such an aggregate occupies the entire width of the container. Next to it are two pairs of standard stores with ammunition of 120 rounds. The remaining space contains the barrel with the fore-end and other components of the NAZ.

Together with the rifle in the container are other means of survival. This is a compact first-aid kit, various equipment, communications, pyrotechnics, tools, etc. With this kit, the pilot can ensure his safety, organize shelter and find food while waiting for rescuers.

Already in 2018, the air forces announced tentative plans for the deployment and use of new weapons. More than 2100 "survival rifles" were supposed to be included in the NAZ for tactical and long-range pilots aviation. "Carriers" of such weapons were supposed to be all the main aircraft of the US Air Force. 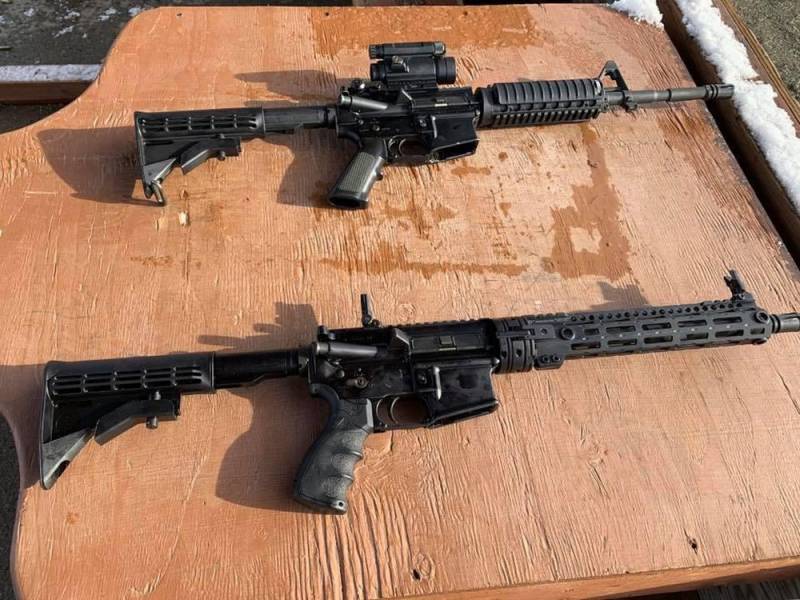 The same samples in assembled condition
GAU-5 / A was created taking into account the restrictions of the NAZ container from the ACES II chair. Such products are used on A-10 attack aircraft, F-15, F-16 and F-22 fighters, as well as on B-1B and B-2 bombers. There are about 1800 aircraft of these types in service. It was also specified that the new rifles will be included in the NAZ of other types of aircraft with ejection seats of other models. In particular, such weapons were intended for crews of B-52 bombers.

Attention should be paid to the fact that the initial plans for the purchase of weapons have been expanded. The year before last, they talked about the need for more than 2100 rifles, but in the end 2700 were made. The reasons for this are unclear. Perhaps we are talking about the need for arming the crews of aircraft of the Air Force, not related to combat aircraft. Also, one cannot exclude the desire to create larger stocks.

The purchase of "survival rifles" is not as noticeable as the acquisition of new aircraft of the latest generation, but it is also of great importance to the Air Force. In case of known unpleasant situations, the pilot must have a personal weapon for self-defense or hunting. Specific requirements are imposed on such a sample, the fulfillment of which can be quite complicated.

Adopted by the U.S. Air Force, the GAU-5 / A rifle in terms of combat qualities corresponds to the standard army M4. Thus, the pilot in an emergency situation has a modern and very effective small arms with sufficient ammunition. In this case, the rifle is disassembled and placed in a NAZ container and is present next to the pilot.

In fact, the GAU-5 / A is the first example of a survival weapon with this combination of characteristics. The previous systems, which were in service with the US Air Force, either had insufficient firepower, or did not differ in the convenience of transportation. Moreover, in recent years, NAZ did not include weapons at all.

Now the situation has changed. The new model was adopted, put into series and brought to operation. At the disposal of the pilots appeared a modern and effective weapon for solving various tasks in difficult situations. US Air Force pilots are mastering the new GAU-5 / A rifle and so far use it only on shooting ranges. And, probably, sincerely wish that they did not have to experience it in a real battle.

We are in Yandex Zen
Sniper fire in local wars
What should be a modern sniper (part of 1)
79 comments
Information
Dear reader, to leave comments on the publication, you must to register.